An eerie flood in North Dakota has wiped out roads, churches, cemeteries, and hundreds of farms. 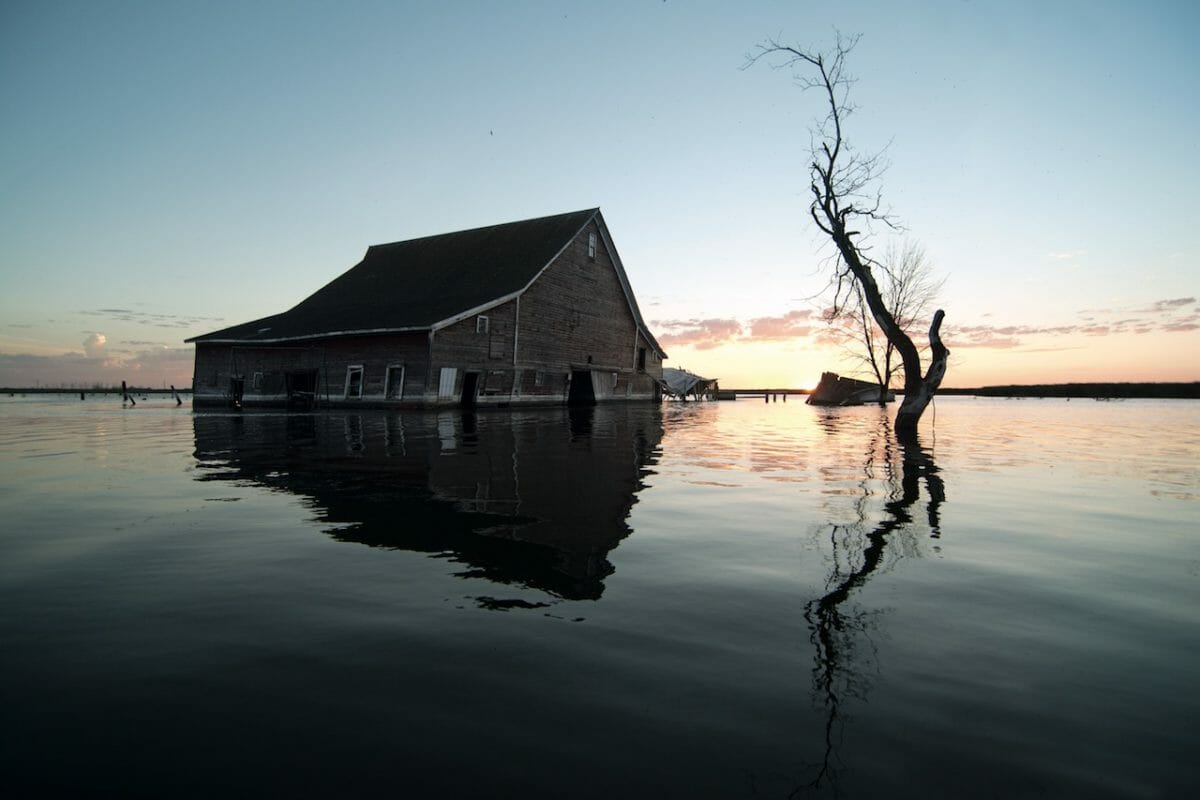 Paul Johnson, a Minnesota-based photographer who grew up in North Dakota, returned to his home state in the summer of 2014 to capture the inundated farming communities surrounding Devils Lake - including Churchs Ferry, where he snapped this abandoned barn and the scenes on the following pages.
Photography Photographs by Paul Johnson
Share
Tweet
Pin
Email
3K Shares

For teens in the late 1970s and early ’80s, the lake – home to mischievous spirits, according to Native American lore – lured us to cut class, drink beer, listen to AC/DC, and paddle around in boats under fluffy blue skies, past grazing cows and John Deere tractors churning the dark soil. The area was experiencing a mild drought then, so our refuge inevitably took on an uninviting dark green hue come fall. No matter. We’d slalom through the sludge, emerging slime-covered, then wait for next spring’s snowmelt to give the bay fresh new life. The cycle maintained a seemingly predictable rhythm.

In reality, our playground was hardly stable. A closed glacial basin unconnected to any rivers, Devils Lake is fed only by precipitation and runoff and emptied by evaporation alone. Consequently, the water has both fanned out and virtually disappeared several times over the past 4,000 years. In the late 1800s, a grand steamboat called the Minnie H delivered mail to towns now serviced by postal trucks. My grandparents lived to see the shoreline shrink – with towns, roads, and farms colonizing the newly exposed land that had previously been underwater. All that was ancient history to my parents and me. For two generations, the level of the lake stayed consistent enough that most of us didn’t think much about it.

Some wet years in the ’70s prompted the city to build a levee to protect its sewage system close to the waterfront. Periodically, a handful of concerned citizens also pushed for a man-made inlet/outlet to stabilize the ebb and flow. Alas, nothing happened. Therefore, the haven of my youth remained unchanged, even after I moved to New York City to embark on a magazine career in 1987. 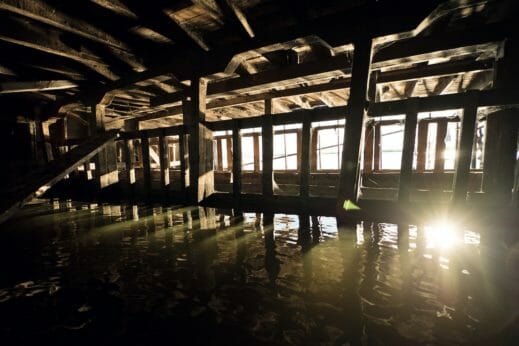 And then the rains came. A four-year drought shifted into an epic rainy cycle starting in 1993 when storms pelted the area and heavier snowfalls melted onto the waterlogged land. By the time driving summer showers arrived, the lake, with nowhere to go, spilled unchecked across our notoriously flat topography. The water rose nearly five feet that first year, destroying lakeside homes and, of course, farmland. “It was a gut punch,” says Jeff Frith, manager of the Devils Lake Basin Joint Water Resources Board. “During other rainy stretches, there’d be an especially wet year, followed by a less wet one, so the water had a chance to recede,” he explains. Only this time the precipitation continued, causing the lake to double in size by 1999. Unfurling amoeba-like, the growing basin engulfed everything from cemeteries to football fields. “The biggest misconception, from average Joes to the most experienced water engineers, was that the water couldn’t keep going up,” adds Frith, also a county commissioner. “But it did.”

“We saw fish jumping while we filled up the tractors and knew the house was next,”

As surprise turned to terror, residents looked for a cause – fewer wetlands, global climate change – to blame. To locals, the rise felt freakish. Among climatologists, not so much. “The area shifts in and out of two tremendously variable climate states over long spans of time,” explains Karen Ryberg, a researcher with the U.S. Geological Survey in Bismarck, North Dakota, an agency that’s been studying the Devils Lake region intensively for decades. “When you look over thousands of years, this cycle is well within the norms.” Indeed, when settlers arrived in the late 1800s, the lake held almost as much water as today.

That’s cold comfort to farmers, who’ve endured catastrophic misfortune. “It was like dying a slow death,” recalls Dan Webster, a friend of my dad’s, who grows 11,000 acres worth of wheat, corn, barley, and soybeans with his son-in-law near the village of Churchs Ferry. After the first 1,500 acres of his family’s third-generation farmstead succumbed, the scene became downright surreal. “We saw fish jumping while we filled up the tractors and knew the house was next,” he explains. In order to keep his childhood home from dissolving into dangerous debris, Webster, with the help of his father, was forced to burn the place down before waves lapped the foundation. By 2011, water breached a road acting as a dam and rushed over the last 1,000-acre piece of his grandfather’s land. “It was devastating,” he says. 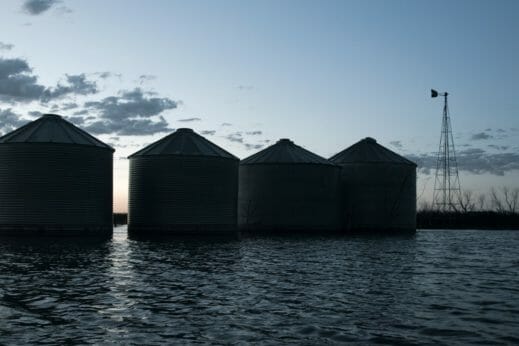 Aluminum grain bins will remain sturdy for years – unless they become waterlogged. “Once that happens, the concrete heaves and they’ll never be usable again,” explains local farmer Dan Webster

Nonetheless, Webster considers himself one of the lucky ones. He’s managed to keep farming by buying and renting acreage, some from neighbors who’ve thrown in the towel. Though precipitation has leveled off in recent years, the lake still varies by a few feet annually. In 2016, an uptick put 130,800 agricultural acres out of production – translating to direct losses of $36.2 million, according to Dwight Aakre, former North Dakota State University Extension Service farm management specialist. And a dip last year enabled Webster to seed 800 of his lost 2,500 acres at the lake’s edge. “Those fields under 20 and 30 feet of water? We won’t see that land again in our lifetime,” predicts Frith.

Because the flooding manifested as relentless creep, as opposed to a unifying rush, the community struggled to coalesce behind a single solution. “It was tough to speak with one voice when our farms were getting picked off one at a time,” explains Webster. Nor did it help that the wetter years yielded record-breaking crops for those who weren’t flooded. “I had guys come up to me later to apologize,” he explains. “Once they were affected, they understood.”

During the mid-’90s, the Army Corps of Engineers extended the levee to protect both the sewage system and the entire city from flooding, at a cost of nearly $60 million, then had to extend it again to the tune of $130 million when a rise made the work obsolete. Similarly, major highways were rebuilt – only to be flooded and built again. In two and a half decades, upwards of $1.5 billion have been spent by the township, the state, FEMA, and the Army Corps to address the problem, including the construction of two emergency outlets – dam-like structures powered by electric pumps. Today, officials are confident they’ve finally constructed roads high enough to withstand whatever rains come, but those infrastructure solutions won’t ameliorate the plight of inundated farmers.

Some have already changed livelihoods, leveraging their newly waterfront outposts into resorts and campgrounds. Jim Yri’s parents once ran a cattle and grain farm where he and his wife Diane now host overnight guests. “By 2001, the lake had swallowed 2,000 acres, so we had to either take a chance here or pack up and move,” Diane remembers. Loath to give up his profession, Jim continued to work what was left of their land as the couple brought in three small modular cabins to rent out and dipped their toes in the tourism business. Unlike locals accustomed to canoeing past stands of eerily out-of-place trees, visitors to the Yri’s thriving year-round resort, West Bay, are often oblivious to the area’s fraught history. “People will go out fishing and see machinery and buildings sitting in the water and ask, ‘Why is that there?’” recounts Jim. 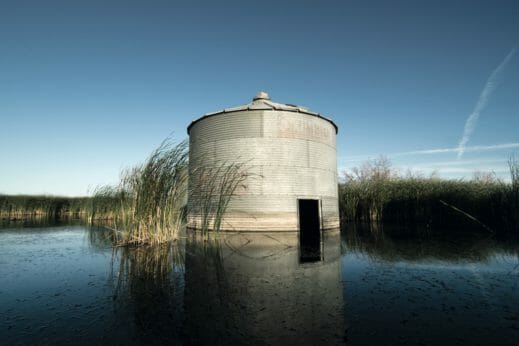 “It’s impossible to imagine dry farmland in places where you find wetland grasses and waterfowl now,” says Johnson. A high-water mark three feet above the lake’s surface left rings of rust around this grain bin surrounded by cattails.

Of the nearly 30 campgrounds and resorts that have sprung up, at least seven were once farms. “My grandpa used to harvest wheat on land that is now in the lake in front of us, so I get it,” explains Kyle Blanchfield, who owns Woodland Resort, across from the long-gone beach I hung out on throughout my childhood. “But the high water has given us a world-class fishery, and people now come from all over to vacation in Devils Lake.”

It’s true. A couple of summers ago, my extended family rented a sprawling cabin at Blanchfield’s resort, and I hauled my New York City crew there for a week. I sipped Coronas at dusk beside a fire pit, gazing out at the now-brimming bay. As my 13-year-old strummed her ukulele and my 16-year-old son caught a cooler full of fish, the sound of a motorboat pulling a skier in the distance released a wave of my own teenage memories and I felt only joy. 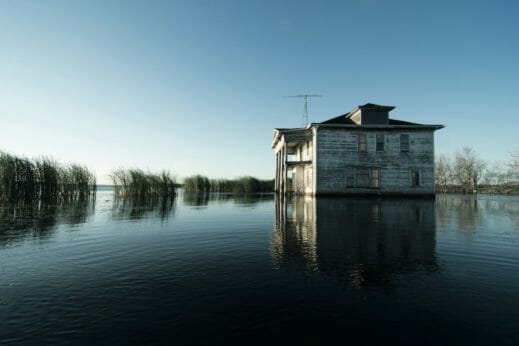 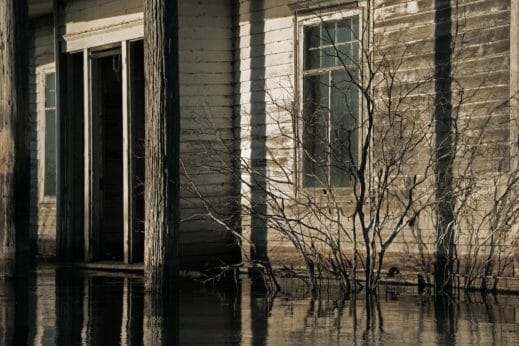 As Johnson rowed past this century-old house that has sat submerged for 15 years, he explains, “I thought about the generations that grew up here and imagined how hard and strange it must have been to have water slowly take away their connection with the land.” While shooting, the photographer encountered partially sunken plows, augers, and farm trucks – hazardous debris to area boaters and sorry ghosts of livelihoods lost.

Our fickle lake will never prove quite so simple. Blanchfield’s place exemplifies the area’s latest challenge: how to balance the interests of active farmers, who still need the water to regress, with those who own resorts, who don’t. “The lake’s now at about 1,450 feet, and we’re pretty happy,” notes Blanchfield, who, like most locals, has learned to talk in statistics. “If it gets too shallow, we could lose all that we’ve invested in this place.” Is there a depth that will suit everyone? “My fantasy is that we will all come together to figure out a perfect level, then fight like hell to make it happen,” says Frith. “Chances are, though, that either way, you’ll be stomping on someone’s livelihood.”

Devils Lake is heaven to a Central Valley Californian. I visited relatives many times thru the years and grew to love it. Fishing is the best and oh the corn in season.

Great update, thanks. I shot there in April 2012 and have been meaning to go back. http://marklanningjr.com/northdakota/

My hubby, Lawrence E. Anderson, Jr. graduated from Minnewaukin (SP?), ND in 1963. We live in Eau Claire, WI.
The last time we were in Leeds, ND where his parents, Norma and Lawrence, Sr Anderson had moved was in 2003 when his Mother passed away. We had been out there several times from 1998 thru 2003 and couldn’t believe the changes in Devils Lake.
Thx for the up date. We hope to make it back one day again.