Worried About Foodborne Illness? Your Smartphone May Soon Be Able to Help

Worried about food poisoning? This at-home test could help you stay in the clear. 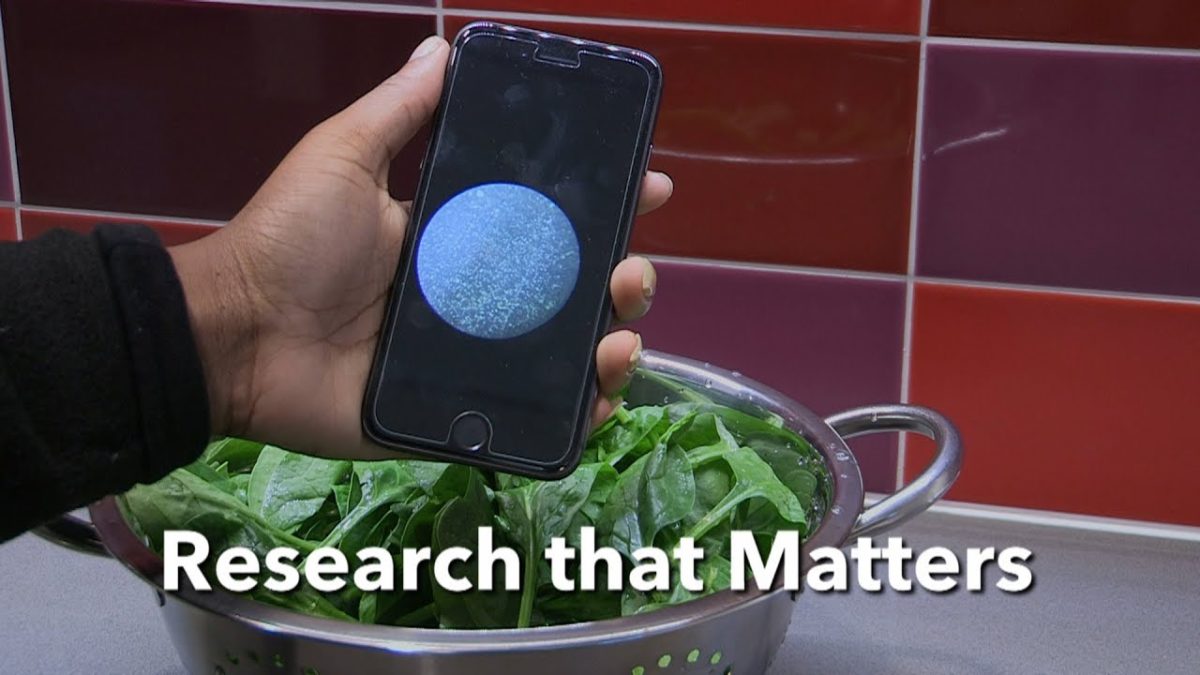 Over at UMass Amherst, chemist Lili He has come up with a new solution for detecting bacteria on food that doesn’t involve days-long testing periods or expensive equipment. In fact, all you need is a smartphone and a $30 microscope that attaches to the device’s camera.

He’s optical detection method seems pretty easy to use. Take your produce, like raw lettuce or an apple, and run some water off of it, catching it into a container. Place a bacteria-detecting chip in that water, and then view that chip with the microscope attached to your phone. At the moment, any harmful bacteria, like listeria or salmonella, will show up on your phone’s screen as an array of blobby dots. But eventually, He imagines the smartphone doing the detection itself, no human element involved. In other words: take a picture and see.

This is a major improvement over the standard method of bacterial detection, which is called Aerobic Plate Count (APC). APC testing is reliable, but requires all kinds of equipment: pipettes, petri dishes, circulating water baths, agar, an incubator, and equipment for refrigerating and freezing, among others. This new test? Basically none of that.

While He says her test shows both good sensitivity and solid reliability, tests like this are not particularly precise; they show total bacterial counts, rather than singling out the harmful bacteria. The numbers are correlated – a really high general bacteria count indicates that some of it could be harmful – which is why the tests are still useful, but it isn’t laser-focused for pathogens. Still, it amounts to essentially an easy, inexpensive home testing kit, one that could be used both by consumers in their kitchens and by, say, aid workers trying to make sure people don’t get sick.

There are many cases when the tech brings a better life and helps to keep healthy. Thank you for sharing this post.

Popular
A Once-Forbidden Fruit Makes a ResurgenceShelby Vittek
7 Smokable Plants You Can Grow That Aren’t MarijuanaBrian Barth
Goat Sex: Everything You Wanted to Know But Were Afraid to AskAndrew Amelinckx
6 Differences Between Llamas and AlpacasAndrew Amelinckx
Philippines Becomes First Country to Approve GMO ‘Golden Rice’Dan Nosowitz
Explore Modern Farmer
Related
Environment, Plants
Vegetables Aren’t Always VeganEmily Baron Cadloff
Animals, Food & Drink
Rancher Co-ops Offer Meat-Processing Solution For Small FarmersCatie Joyce-Bulay
MTMF
The Dirt Road that Led to TokyoEmily Baron Cadloff
Plants
A Once-Forbidden Fruit Makes a ResurgenceShelby Vittek
wpDiscuz
We use cookies on our website to give you the most relevant experience by remembering your preferences and repeat visits. By clicking “Accept”, you consent to the use of ALL the cookies.
Cookie settings ACCEPT
Privacy & Cookies Policy