Size Isn’t Everything. Here’s a Farm That Fits in Your Kitchen

The key to Nanofarm, which is smaller than a mini-fridge, are its patent-pending plant pads, which are made out of multiple layers of fabric and paper. The pads contain the seeds and the same kinds of plant nutrients used in traditional hydroponics – elements like nitrogen, phosphorus, and potassium – that are culled from sustainable […] 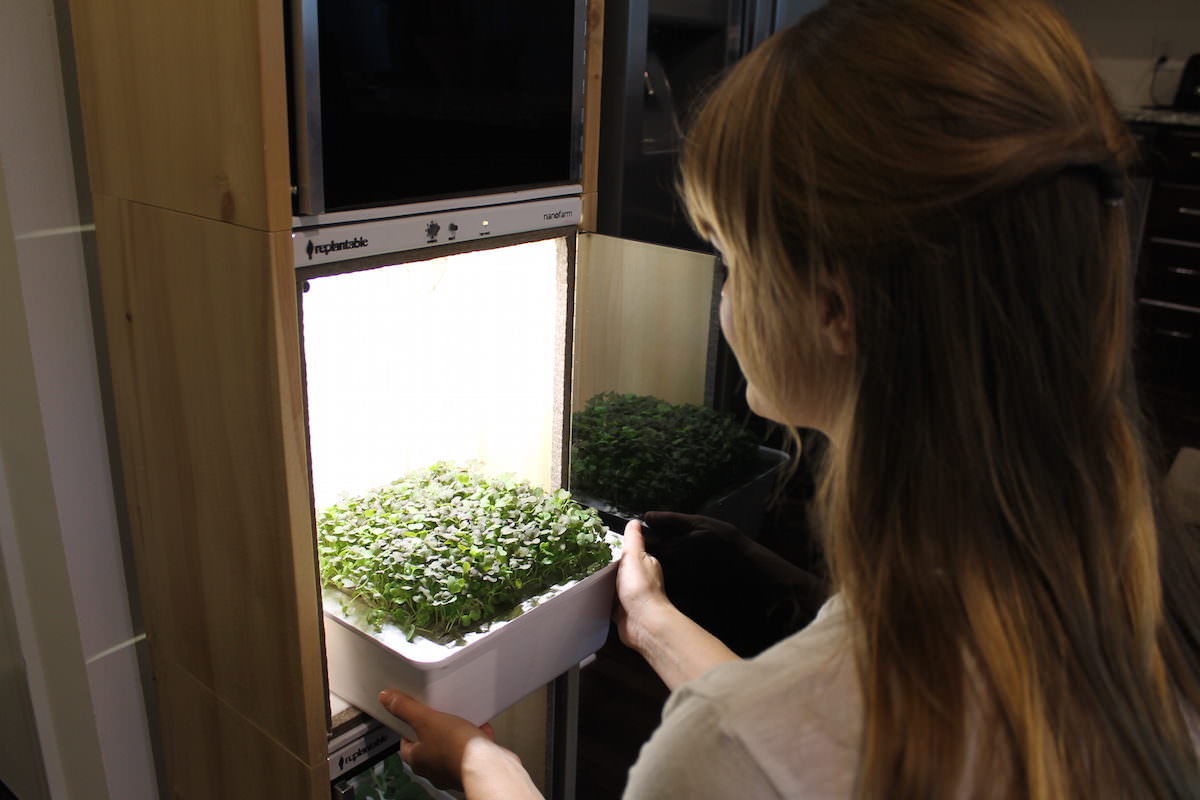 The key to Nanofarm, which is smaller than a mini-fridge, are its patent-pending plant pads, which are made out of multiple layers of fabric and paper. The pads contain the seeds and the same kinds of plant nutrients used in traditional hydroponics – elements like nitrogen, phosphorus, and potassium – that are culled from sustainable sources like compost tea and aquaculture waste. The pads sit on top of a water-filled reservoir.

The Nanofarm only has two knobs: a dial to control the grow cycle and a start button. Theoretically making it more straight-forward to grow your own vegetables than defrost leftovers in a microwave.

To start a grow cycle, just turn the dial labeled “weeks” to the number indicated on the plant pad and then push start. The “harvest” light turns on when your plants are grown. You then have about two weeks to pick your veggies or herbs. The used pads are biodegradable and can be composted. The company offers a variety of vegetables, like romaine lettuce, radishes and kale; and herbs like basil, thyme, and cilantro.

One Nanofarm can produce around 12 ounces of romaine lettuce or four ounces of basil (about five and a half packs of what you would find at the grocery store). The growing space is comparable to a good-sized windowsill planter, but the produce only takes between two to four weeks to grow thanks to the daylight spectrum LED lights that provide as much light as a California summer day, but consume less than a dollar of electricity per month, according to the company. The smoked glass front of the Nanofarm keeps the light from being annoyingly bright on the outside of the device.

The estimated retail price of the Nanofarm is $400, but you can pre-order one on the company’s website for $350. The plant pads are $8 each or $5 if you buy five or more at a time.

But it may be a while before you can get one for your own kitchen. While the company has created beta versions of the Nanofarm, the product won’t be available to consumers until late next year. Ruwan Subasinghe, the company’s co-founder, tells Modern Farmer they are currently getting samples of the parts that go into the Nanofarm and once approved, they can move into prototyping units for mass production, then onto actual production.

The company just finished a Kickstarter campaign that raised about $61,000, $11,000 more than their goal. Subasinghe says they were “quite surprised” by the support they received – and not just financially. He says they got a ton of messages from people who enthusiastically believe in what they were doing. The Kickstarter contributors get the first mass-produced models that are tentatively set to be shipped next October. It will be a few more months after that when the general public will be able to get one.

Subasinghe and his business partner, Alex Weiss, met when they were attending Georgia Tech, in Atlanta, where they were working on projects involving hydroponics and issues of food waste. They realized that the produce you get at grocery stores tends to have travelled thousands of miles to reach the store’s shelves, which leaves only a small window of time before the produce goes bad, leading to food waste. They joined forces with the idea of combatting food waste and last year started Replantables following their involvement in a startup accelerator through the school. “We saw the potential for hydroponics to allow people to grow their own food at home,” says Subasinghe.

The initial prototype was just a souped up hydroponics system made out of PVC pipes with running water, filters and pumps that needed to be cleaned by the user, according to Subasinghe. They quickly realized that consumers wanted something simpler and easier to use. By the time they were done with the beta version, it was almost completely automatic and no longer resembled a typical hydroponic system since they’d ditched the pump, liquid nutrients, and inert growing medium.

“We hope that by providing technology that allows people to easily grow their own food while using fewer resources, we’re allowing the future of food to be more earth-conscious.” says Subasinghe.