There have been plenty of political rumblings in the food world lately. 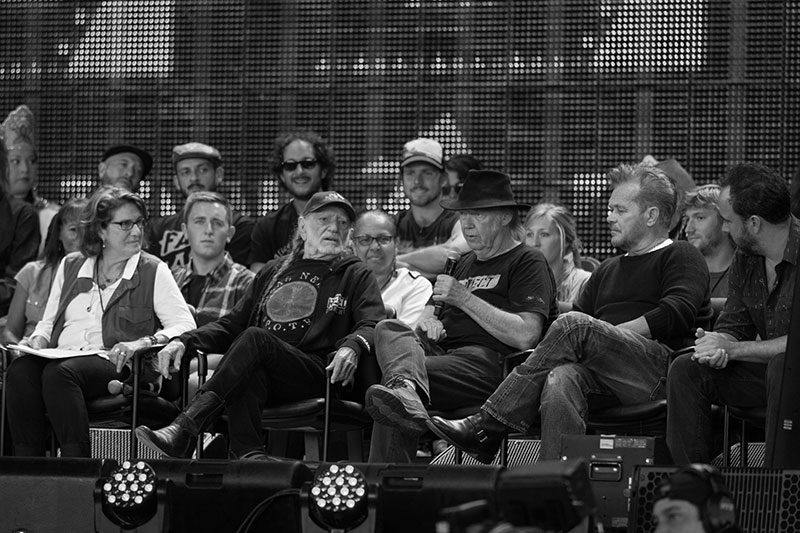 But as the election draws closer, food and farming organizations are ramping up the pressure to make their voices heard. Here’s a quick look at the latest news in the ag advocacy world, from the liberal to the conservative to the outer fringes of the political spectrum.

Plate of the Union in a Town Near You

Chef Tom Colicchio, co-founder of Food Policy Action, has been hitting the campaign trail in the battleground state of Ohio to urge college kids to let the candidates know how important these issues are to them. It’s all part of the Plate of the Union campaign, a coalition advocacy groups urging the next administration to establish a national food policy. The campaign group has been following the candidates around the country in food truck, handing out healthy snacks and talking to voters about the issues. They’ll be in Chicago on Thursday and making stops in Iowa and North Carolina in October. See the schedule here.

Farm Aid held its 31st annual concert to raise money for small farmers this month. But the annual event has become a movement of its own, with a year-round advocacy campaign and numerous events staged throughout the week leading up to the show. The organization uses its considerable star power – Willie Nelson, Neil Young, John Mellencamp, and Dave Matthews are the perennial headliners of the show – to shine a light on food issues. This year Farm Aid gave the USDA a piece of its mind about how to better support the nation’s dairy farmers, who have been under severe financial distress of late due to a downturn in milk prices. And a host of agricultural and musical luminaries took turns offering up their opinions on the state of the food system and what the incoming administration needs to do about it: Neil Young took jabs at both Obama and Monsanto (and Bayer), while Joel Salatin lamented the reasons why there are more Americans in jail than there are running farms.

In each election the American Farm Bureau Federation – the nation’s largest pro-agribusiness lobbying group – asks the presidential candidates a series of questions to clarify their stance on specific ag issues. They are one of the few farming organizations with the political clout to get direct answers to such questions. This year the Farm Bureau is quizzing the candidates on everything from their hoped-for repeal of the EPA’s “clean water rule” to the Trans-Pacific Partnership, a nascent international trade deal which they support. The candidates’ answers are being released over a ten-day period, which culminates this week. See the full list here.

Earlier this month Donald Trump published a fact sheet on his economic policy, which said he would take broad steps to roll back the FDA’s food safety regulations, stating that the “FDA Food Police” – an agency that does not exist – should be eliminated in order to cut costs related to their “inspection overkill.” The document claimed that, “[the Food Police]… dictate how the federal government expects farmers to produce fruits and vegetables and even dictates the nutritional content of dog food. The rules govern the soil farmers use, farm and food production hygiene, food packaging, food temperatures, and even what animals may roam which fields and when.” Hours later, the statement was deleted with no explanation.

David Bronner, the cosmic engagement officer (or, if you prefer, the CEO) of the soap and body care company Dr. Bronner’s, announced his resignation from the board of the Organic Trade Association in a spat over the organization’s support for the recently passed GMO labeling legislation. Afterward, he said he would be redirecting his political support to a variety of other causes, including: a $250,000 donation in support of higher minimum wages; a $100,000 donation to support a livestock welfare campaign; and a $660,000 donation in support of the Marijuana Policy Project and other pro-cannabis legalization campaigns. A replacement has not yet been announced.

Popular
The Future of Hay Drying in AmericaLindsay Campbell
How to (Actually) Get Rid of Fruit FliesEmily Baron Cadloff
7 Smokable Plants You Can Grow That Aren’t MarijuanaBrian Barth
The Story of Brazil Nuts is Kind of NutsAndrew Amelinckx
When Tractors Invaded D.C.Sam Brasch
Explore Modern Farmer
Related
Plants
There’s a Pumpkin Fungus Among UsLindsay Campbell
MTMF
How One Organization is Restoring a Community of Black FarmersEmily Baron Cadloff
Plants
Organic Soybean Prices Spike Despite Huge US Soybean ProductionDan Nosowitz
Food & Drink
Why Global Food Prices Continue to ClimbAlastair Smith
wpDiscuz
We use cookies on our website to give you the most relevant experience by remembering your preferences and repeat visits. By clicking “Accept”, you consent to the use of ALL the cookies.
Cookie settings ACCEPT
Privacy & Cookies Policy