The Inner Lives of Chickens: 5 Things You Never Knew About Your Beloved Birds

We still don't know why they cross roads, but there is a lot we do know about the most populous, most eaten, and most studied birds on the planet. 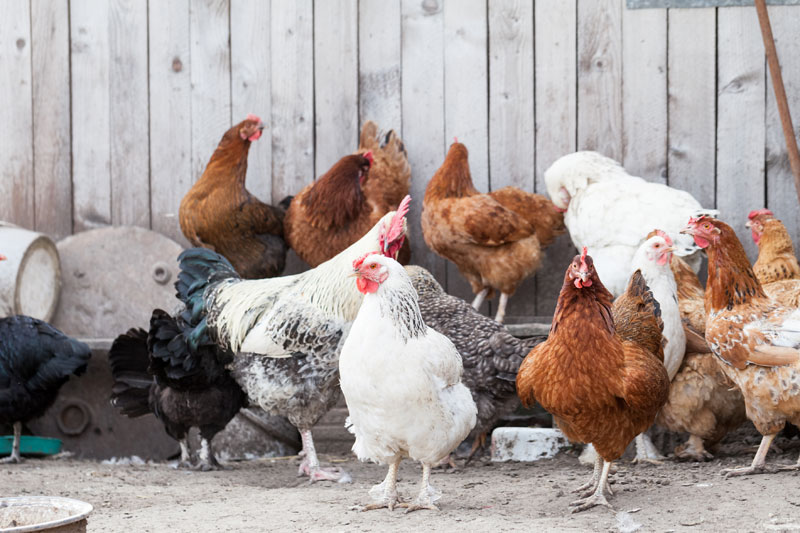 No livestock is reared in greater numbers than chickens, and none has been studied in greater detailed. In 2004, chickens became the first bird to have their full genome sequenced, uncorking a deluge of scientific inquiry into their physiology, as well as their social behaviors and even their psychological dimensions. Scientists have determined that they are smarter than toddlers and exhibit learning and communication behaviors on par with primates.

Needless to say, there is more going on in a coop than meets the eye – chickens aren’t just egg-laying robots with tender breast meat; they are sentient beings with lives of their own. So if you’ve never thought about what chickens might be thinking, here is some food for thought.

How Do They Communicate?

All that clucking is not random – chickens have a language of their own. Experts say that in addition to saying “cluck,” chickens “pok,” “brawk,” and “squawk.” And from these basic syllables, chickens are capable of at least 30 different calls, ranging from “hey, I found a bunch of grasshoppers” to “see you later, I’m going to lay an egg” to “come over here, you sexy rooster!” Other calls are a response to stress, which vary between those that warn of a raptor circling above and predators that attack from the ground, like foxes. Hens start talking to their chicks in soft tones while they are still in the egg – if you listen close you can hear them peeping back from inside the shell.

Do Chickens Have Feelings?

Yes, says British researcher Jo Edgar, who determined that hens, at least, experience empathy. He designed an experiment that simulated chick stress and found that the mother hens behaved as if they themselves were experiencing the pain – a classic sign of empathy. Chickens are also known to display mourning behavior when another chicken in the flock dies, and they will show signs of depression if they are removed from the flock and placed in solitary quarters.

What Do Chickens Dream About?

We don’t know exactly, but we do know they dream. Along with humans and other mammals, chickens (all birds, really) have an REM phase of sleep, a period of “rapid eye movement” that signifies dreaming. We’d like to presume that most of their dreams are filled with imagery and emotions from their daily lives, just as ours are, perhaps punctuated by occasional dreams that stem from chick-hood trauma or aspirations of flying like an eagle (chickens can only fly for a few seconds at a time). Chickens have another phase of sleep that humans lack, however, called USWS (unihemispheric slow-wave sleep), in which one half of the brain is resting, while the other half is awake. This is why chickens can be seen sleeping with one eye open and one eye closed, an evolutionary adaptation that allows them to keep watch for predators while they doze.

What Makes a Rooster Sexy?

There are a few criteria, as it turns out. Size and strength are important, as the more powerful roosters have a higher rank in the pecking order, and are thus able to provide more food for their harem of hens. The size and color of a cock’s comb – the fleshy red appendage on a male chicken’s head – is also a factor, as are the wattles, the dangling red flesh beneath their chins. Bigger and redder is better in both instances. Food, wattles, and a cock’s comb all come into play during the mating dance, which is called “tidbitting,” where the rooster repeatedly picks up and drops morsels of food on the ground in a dramatic way, while bouncing those fleshy protuberances around as much as possible. Still, hens are notoriously promiscuous, typically mating with several roosters at a time. They have the unique ability to eject the sperm of inferior roosters after copulation, however, ensuring that their genes will be coupled only with the most studly cock around.

How Smart Are Chickens (and should we be afraid of them taking over the planet)?

A surprising number of people suffer from fear of chickens, a condition known as alektorophobia, which may not be as unreasonable as it sounds given what scientists have been discovering about them. Recent research has shown that chickens can distinguish between more than 100 faces of their own species and of humans, so they know who you are and will remember you if you treat them badly. They’ve demonstrated complex problem-solving skills and have super-sensory powers, such as telescopic eyesight (like birds of prey) and nearly 360-degree vision (like owls). Chickens are the closest living relatives of the Tyrannosaurus rex (researchers determined this in 2007 by testing proteins from a particularly well-preserved T-rex leg bone), and they outnumber human beings on the planet 3 to 1. There hasn’t yet been an Orwellian uprising of chickens revolting against farmers due to poor coop conditions, but to all those that use tiny “battery” cages, cut off beaks, and engage in other atrocities common to industrial chicken farming – watch out, your birds may be plotting against you.

Hello! I am a first time chicken tender long time animal lover and carer. I came across your site looking for height of chicken nipple waterer lol I do have an amazing story to tell of a chicken funeral held by the deceased chickens yard buddy and brood mate and the hen she saved by sacrificing herself. My other two hens are red sex linked and wanted nothing to do with the little ones, as I call them, but after it happened the two sex linked put aside their differences for this occasion and not only showed empathy for the… Read more »

We’ve had chickens for several years now.And to me and mum at least they have never been just producers of eggs. To us they are family, pets, we love them. Now are some stinkers sometimes or ornery? Of course, but we still love them and we will never eat them if they pass l, when they do pass we respectfully bury them and have a moment of silence for the fallen and the rest of the flock all watches the whole thing too in a sort of silent vigil. That being said over time the idea of eating chicken has… Read more »

Hi, I have two chicken who are loved and well cared for. Both stopped laying a month ago approximately, and I found them in the coop sitting in the nest, and one had her wing over the other. They only come out to eat and drink, but go back and cuddle the rest of the time.
I am totally perpkexed. Can anyone help?

Whoa!! They cut off beaks? My heart will never mend :,(

Popular
Yes, the Government Really Does Stash Billions of Pounds of Cheese in...Emily Baron Cadloff
How to (Actually) Get Rid of Fruit FliesEmily Baron Cadloff
Paddleboarding Goats Make a Splash on Prince Edward IslandNoah Lederman
7 Smokable Plants You Can Grow That Aren’t MarijuanaBrian Barth
What to Do With an Abundance of PeppersShelby Vittek
Explore Modern Farmer
Related
Plants
This Seed Detective Travels the World Tracking Down Lost CropsEmily Baron Cadloff
Environment, Plants
Making the Case for IntercroppingShea Swenson
MTMF
Meet the Modern Farmer Helping Immigrant Farmers Sell Their ProduceBridget Shirvell
Food & Drink, Plants
In Awe of the PawpawDanny Childs
wpDiscuz
We use cookies on our website to give you the most relevant experience by remembering your preferences and repeat visits. By clicking “Accept”, you consent to the use of ALL the cookies.
Cookie settings ACCEPT
Privacy & Cookies Policy