Do you tremble just thinking of chickens? You're not alone - but you should really get some help. 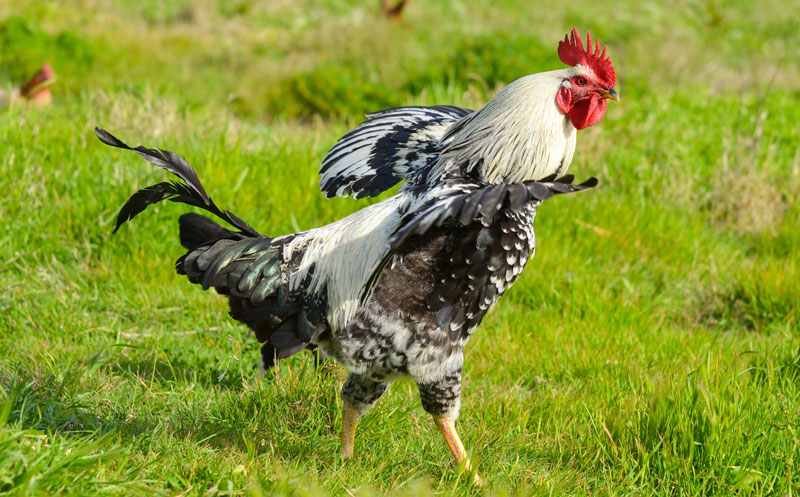 That’s the travesty that one poor alektorophobe – the term for people who suffer from irrational fears of chickens and other fowl – dreamt when he was nine years old. “Ever since… whenever I see a chicken, my mind flocks back to that traumatic [day],” he writes, anonymously, on Reddit. “I think of their talons, and their beaks, and my eyes being ripped out of their sockets.”

For alektorophobes (Alektoro is Greek for rooster), it really doesn’t matter whether the chicken trauma occurred in real life or not – for some the cause even appears to be genetic, with no known traumatic event setting it off, real or imagined. The Reddit blogger still has his eyeballs, but he grew up with a debilitating fear that chickens might attack him at any moment. Those with serious cases of alektorophobia have recurring nightmares about evil chickens, and some daydream about it constantly.

“Some may think chickens are conspiratorial and coordinate their attacks.”

Imagine breaking out in a sweat every time a friend brings up the subject of free-range eggs. Then they start going on about their plans for a backyard coop, or how cute their neighbors newborn chicks are, as you struggle to conceal your beating heart and shortness of breath. The book The Bird’s World, by Nicolae Sfetcu, states that alektorophobia symptoms may also include “dizziness, dry mouth, nausea, shaking, heart palpitations, inability to think or speak clearly, a fear of dying, losing control, [and] a detachment from reality… Some may think chickens are conspiratorial and coordinate their attacks.”

Those beady, unblinking eyes are a bit spooky, and anyone who has firsthand experience raising chickens knows that “broody” hens are apt to peck at your hands as you try to grab eggs from under them. (But what mother wouldn’t react to someone stealing her future babies for food?) And roosters, of course, are known for having a violent streak. But they are 5-pound birds, after all, not sharks or mountain lions. While the underlying genetic and psychological causes that predispose certain individuals to alektorophobia are unclear, Sfetcu speculates that it’s quite common, and that many people with mild cases of the phobia are unaware that chickens are the trigger, chalking it up to some other anxiety instead.

Since little scientific research has been done on alektorophobia, we don’t know the exact number of those who suffer from it nor whether it’s more common in men or women, or people of a particular ethnicity. The German filmmaker Werner Herzog supposedly suffers from it, according to Sfetcu’s book, as does American actress and fashion model Shannon Elizabeth.

If you think you may suffer from the condition, but are embarrassed to tell your friends about it, there are online forums that can offer suport, such as #Alektorophobia. Treatments include counseling and anxiety medication. British hypnotherapist Glenn Harrold sells an ebook and audio download specifically for people who suffer from alektorophobia, which, the site claims, provides “a permanent and lasting solution to all types of chicken phobia by first releasing destructive conditioning and then programming your mind to feel positive in the company of chickens.”

You can also try what psychologists refer to as “systematic desensitization”: exposing yourself to the source of the phobia in small doses, until you eventually realize you are safe. For example, you might ask a friend with chickens if you can stop by for an occasional visit. Each time you go, stand a little closer to the coop and stay a little longer, while re-assuring yourself that those crazy birds can’t get through the wall and start pecking your eyeballs out.

The Reddit blogger cured his condition with a modified version of this technique – he played a chicken video game called Five Nights at Freddy’s. At first he was fearful of the chickens running all over the screen, but he stuck with it, telling himself they weren’t real chickens. “My main motivation wasn’t completing the game to brag, it was to kick my fear in its tiny, miserable little balls,” he writes. “When I finally completed [it], I felt euphoric, like nothing I’ve ever felt before. I visited my cousin on his farm the next day, telling him about the experience I had. I went up to a chicken that he said was tame and okay to pet, and I pet its soft, luscious, smooth feathers. Last week, I couldn’t stand being within 10 yards of a chicken without trembling, but now I can safely pet a chicken without fear.”

Alektorophobic reactions can result from exposure to eggs, feathers, and even semi-realistic drawings of chickens. Dead chickens seem to be just as scary to alektorophobes as live chickens. But, and perhaps this shouldn’t be surprising, cooked chicken doesn’t seem to be a problem. Apparently many alektorophobes enjoy a good roast chicken. Here’s an interesting account of well-known British rugby player Tommy Seymour – a very tough guy, undoubtedly – who runs away if he sees a chicken (for which he is the subject of much locker-room mockery). His trauma was not dreamed but occurred while staying with relatives in the country when he was nine. He’s slowly working on overcoming his fear, though, one chicken sandwich at a time. Some selected quotes:

“I got penned-in by what I can only describe as a deformed chicken. It pinned me in the garden shed for an hour. This deformed one, that had been adopted, started making this noise that chilled me to the core. The noise, honestly, I can still hear it. It wasn’t human – or wasn’t chicken, should I say.

“It came running at me from behind these trees and I freaked out and threw the seed in the air. It chased me towards the feeding shed so I locked myself in there thinking it would go away. An hour later it was still outside, pecking away.

“Eventually, my brother came looking for me. He shooed it clear and opened the door and I ran and never looked back.”

“I can eat them, though. No problem there. The way I look at it, it’s one less chicken in the world. I’m conquering them one by one.”

this really helped!!! I’ve had a fear of chickens since I can remember and I’m scared to tell my friends about it, no one understands me. I am alone.?