When Pigs … Swim? Unraveling the Mystery of the Bahamas’ “Pig Beach”

We try to unravel the mystery of the swimming pigs of the Bahamas. Come along for a romp through history and a swim with these photogenic porkers. 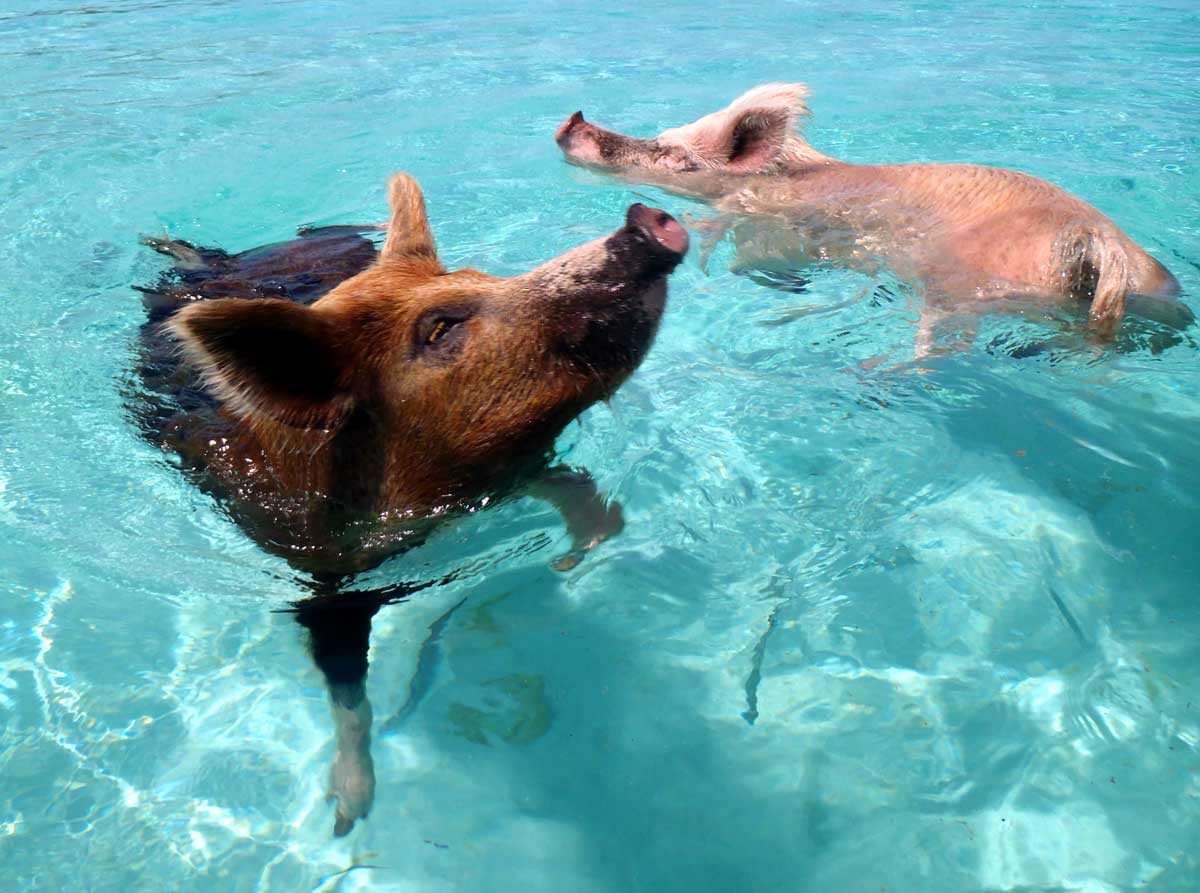 They’ve become quite the media darlings, and the story of these amiable porkers makes the rounds every so often. They even inspired a children’s book, The Secret of Pig’s Island, by Jennifer R. Nolan, and a song called “Pig Island” by children’s author Sandra Boynton. (It’s sung by none other than Scott Bakula.) But behind the images of cute piglets doggy-paddling among smiling visitors, there are some interesting questions. The first: Is it unusual for pigs to swim? The second: How did these pigs get to an uninhabited island in the Bahamas?

To answer our first query, we turned to Dr. Harry Snelson, the director of communications for the American Association of Swine Veterinarians. He says he’s no “expert on swimming pigs,” but then goes on to enlighten us on porcine swimming habits, so we feel he’s more than qualified to answer.

“Pigs are natural swimmers when the situation necessitates,” he tells Modern Farmer in an email. “In my experience, they are adequate to strong swimmers.”

What’s interesting about these Bahamian pigs is that they seem to enjoy swimming – but remember that they are intelligent animals who are motivated by food, so it’s possible their partiality to frolicking in the waves is based on knowing the kind of behavior for which suckers, we mean, tourists, will generously reward them.

For hundreds of years, pigs, and other livestock, from cattle to goats to chickens, were brought by European explorers by ship, and the animals often found their way onto various islands where they were heretofore unknown.

Ok, we’ve sorted that out. Let’s turn to the second question. For hundreds of years, pigs, and other livestock, from cattle to goats to chickens, were brought by European explorers by ship, and the animals often found their way onto various islands where they were heretofore unknown. It’s worth noting that the introduction of these pigs, and other livestock, by Europeans onto various islands around the world had (and, in some cases, continues to have) devastating effects on the native flora and fauna. But regardless, the standard belief was that the livestock was dumped there for later use by sailors. Whether this was true or not was a bit fuzzy, and since historians love a good mystery, we contacted the Naval Historical Foundation in Washington, D.C. They put us in touch with Michael J. Crawford, the senior historian at the Naval History and Heritage Command.

According to Crawford, by the seventeenth century there “were domesticated pigs that had gone wild living on several Caribbean islands,” and were known in French as cochon marrons or “marooned pigs.” Crawford couldn’t say whether the animals “were deliberately released or whether they escaped into the wild.”

A short time after hearing from Crawford, we received an email from Commander Dave Winkler of the U.S. Navy Reserve (Retired), a member of the Naval Historical Foundation. He tells us he “got a tip” that when the British arrived in nearby Bermuda, “they found pigs left by the Spanish or Portuguese.” This is interesting, since, in doing our own research, we found solid evidence that in 1512 at least one Portuguese explorer, Pedro Mascarenhas, released pigs, goats, and chickens, onto the island of Mauritius, located in the Indian Ocean. So, in at least one instance dumping pigs onto uninhabited islands was a purposeful practice. While not definitive, it at least gets us closer to an answer on how the swimming pigs could have found their way onto Big Major Cay.

As a bonus, Crawford clued us in on some pretty cool trivia. He says the frame on which early feral-pig hunters used to barbecue the pork was called a boucan, from which was derived the word buccaneer. The term was eventually “transferred to the pirates of the Caribbean, who also ate the barbecue, and many of whom had started as hunters.” So, all you Tampa Bay fans are rooting for a team named after a barbecue grill – just so you know.

Here’s an even bigger bonus: an early 18th-century recipe (well, actually more like general cooking guidelines … they were pirates, after all) found in the book The Sea Rover’s Practice, in case you want to make some pirate-inspired barbecued pork for yourself. The author, Benerson Little, says to slather pork with lime, salt, pepper, and crushed pimento and grill the meat. The buccaneers would also put this marinade inside the pig’s belly along with various game birds. If you want to be authentic, throw some pork bones and skin into the cooking fire (they believed it added flavor to the meat), and make a sauce of the same ingredients as above for dipping. Apparently, you also have to drink lots of rum while eating the dish. Or so we’re told.