Have Slaughterhouse ” Will Travel

The roving abbatoir. Known primarily by the highly technical name "mobile slaughter unit,” interest has grown, along with the market for local meat. 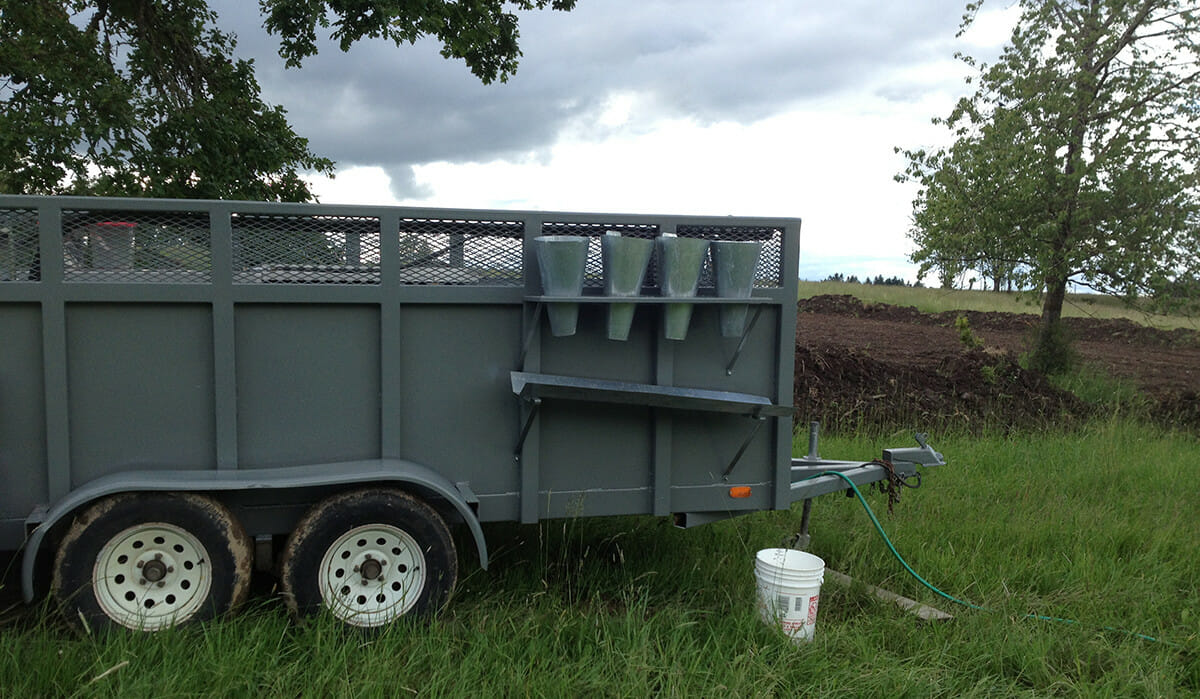 As Virginia livestock farmer Forrest Pritchard documented above in Gaining Ground, when his first pasture-raised beef was ready for the butcher 30 years ago, he discovered that the nearest one to his farm in Berryville was over 50 miles away. Years of consolidation in the meat processing industry had squeezed local butchers out of the capital-intensive, high-risk, low-profit business.

While the years since have seen increased activity in artisanal butchering, the reality for livestock farms smaller than Perdue or Niman Ranch has changed little. Shawna Dewitt and Attila Agoston moved from Orcas Island, Washington, to Neersville, Virginia, 10 years ago to manage their first farm, Mountain View, where they would raise approximately 150 broilers a year, as well as organic vegetables.

“No one had any equipment, except one chicken plucker that people would share, or they would have to go to Pennsylvania and wait all day for their chickens to be processed, which wasn’t economical for between 50 and 150 birds. People still need livestock butchers,” Dewitt told Modern Farmer.

A 2013 study by the USDA’s Economic Research Service confirms their experience: “Farmers often suggest that limited local processing infrastructure restricts the supply of local meat and poultry. Many farmers drive multiple hours one way to their nearest inspected processing facility and bring only a few head at a time, resulting in high transportation and opportunity costs per pound of meat.” A USDA Blog post by Denise Amann, staff officer at its Food Safety and Inspection Service (FSIS), which is responsible for inspecting all meat and poultry sold in U.S. markets, adds: “This is especially troubling to producers at a time when markets for locally grown and specialty products are becoming more and more profitable.”

Enter the roving abbatoir. Known primarily by the highly technical name “mobile slaughter unit,” interest has grown, along with the market for local meat. These roving abbatoirs, often contained in a large trailer, bring the process to the farm with the aim of bringing down processing costs for both red meat and poultry and providing a more humane slaughter than trucking animals miles away from the farm.

In most states, poultry-only mobile slaughter units do not require inspection, but are allowed to operate under one of the federal poultry processing exemptions, most often the producer/grower 20,000-bird limit. The Poultry Products Inspection Act (PPIA) allows multiple farmers to use the same unit as long as (a) the farmers use the unit themselves, on their own farms, to process their own birds; and (b) no one farmer processes more than 20,000 birds per year. But all red meat MSUs must operate under federal (FSIS) or state inspection for the meat to be sold; they must comply with hazard analysis and critical control points (HACCP) and meet the same sanitation requirements as any inspected plant.

The USDA says the first FSIS-inspected mobile slaughter unit was developed by the Lopez Community Land Trust in 2002 with the Island Grown Farmers Cooperative for the community of Lopez Island, one of Washington State’s coastal San Juan Islands. Prior to the unit’s arrival, farmers had to go off-island to slaughter their animals and transport the meat back to the island, gobbling up their already-small profit margins in transportation costs.

Dewitt says they were so inspired by a mobile unit that served the farm they worked on Orcas Island, also in Washington’s San Juan chain, they were determined to develop their own in Virginia. The unit, she said, would come to the farm for any large livestock, kill on the farm, and take the carcasses off-farm for processing. “Even though we’re not really remote here, we had a similar issue insofar as poultry is concerned. Nowhere did we have a viable option,” she said.

In fact, the USDA reports far fewer inspected poultry plants than red meat plants for several reasons. Profit margins are thinner, many states allow the sale of poultry processed under one of the federal exemptions, and poultry production at smaller scales is typically seasonal.

So Dewitt and Agoston spent $10,000 to have a poultry-only mobile processing trailer custom built. The trailer has six “killing cones,” a large propane-fired automatic scalder, an automatic chicken plucker, an eviscerating table and a chill tank that gets filled with ice water and finished carcasses. As with most mobile units, the Mountain View trailer does not contain any facility for packaging or storing finished cuts of meat.

“We use it for ourselves, but the main thing is we rent it out to other farms. That was the whole idea,” says Dewitt. Between April and November, she said, Mountain View rents the unit five or six times per month to farms anywhere from 45 minutes to two hours away. The roving abattoir could provide more revenue if they marketed it more actively, she said. “But that was not our intention. We make a very small profit, but it’s more of a community project,” says Dewitt.

It’s not clear exactly how many roving abattoirs operate in the US. Amann’s blog cites nine FSIS-inspected units. A count of mobile slaughter units listed on both the Niche Meat Processors Assistance Network and ATTRA, The National Sustainable Agriculture Information Service, nets 25, several of which are not state- or FSIS-approved. Mountain View’s roving abattoir is not USDA/FSIS inspected, for example, but VA allows the on site sale of up to several thousand chickens, as noted above. In Yamhill County, Oregon, the Tindall family’s mobile poultry processing unit provides all the necessary equipment to facilitate on-farm poultry processing for any poultry farms operating under the poultry exemption (OR HB2872) passed in May 2011.

One of the first poultry mobile units was built in Kentucky in 2001 by Heifer International with Kentucky State University (KSU), Partners for Family Farms (PFF), and the National Center for Appropriate Technology (NCAT). State-approved but uninspected, the MPU is owned and maintained by KSU. It requires at least a ¾-ton truck to tow the 20-foot cargo trailer. It must be used at an approved location – beside a concrete pad with electric and potable water supply, wastewater disposal through an approved sewer and an approved composting system or other method of solid waste disposal. Approved for “small livestock, poultry and aquaculture,” its MPU also has a vacuum packer and can handle up to 400 birds per day.

Mobile slaughter unit pioneer Bruce Dunlop, of the Island Grown Farmers’ Cooperative and Niche Meat Processors Assistance Network Advisory Board, says that in a 25-foot unit, “one butcher can normally process 20-25 goats or sheep per day, and two butchers can process around 10 cows per day.”

Fixed poultry processing plants charge between $1.25-$3 per bird, while roving abattoirs typically charge a flat fee for a set number of birds, or a day rate. Mountain View charges $75 for up to 24 hours, and $100 for up to three days. Kentucky’s roving abattoir costs $75 for the first 50 chickens, which must be processed within 7.5 hours, and $10 per hour and $0.75 per chicken for more than 50 and a longer day. Kentucky also requires people who want to use the unit to complete a one-day training session, which costs $75 per person.

Although roving abattoirs were intended in part to reduce the cost of processing, the ultimate cost depends on the number of animals to be processed. Because most mobile units handle only slaughter, the carcasses have to be packaged in a separate facility, which can increase the cost and, for some users, end up being more than the cost of doing it at a fixed plant. But most fixed plants have a minimum that exceeds small farm processing needs. Thus, in its 2013 report on local meat and poultry processing, the USDA maintains that mobile units “can work well for local and regional meats.”

Dewitt, who offers classes on how to process chickens, says her customers’ only real concern about using the mobile unit is being scared of having to do the slaughtering themselves, as Mountain View’s unit does not come with a crew, as do some roving abattoirs. The Island Grown Farmers Cooperative mobile unit, for example, comes with a crew of two butchers.

“Once they know how and know about the industrial processing system and its ‘cleanliness’ standards, they can process to their own standard, they know it’s their bird and it’s just one more step in taking back responsibility for your own food system. A lot of people who took a class from me now rent from us year after year,” she said.