With the Amish-inspired horse treadmill, your horse can now make ice cream and we aren't joking. 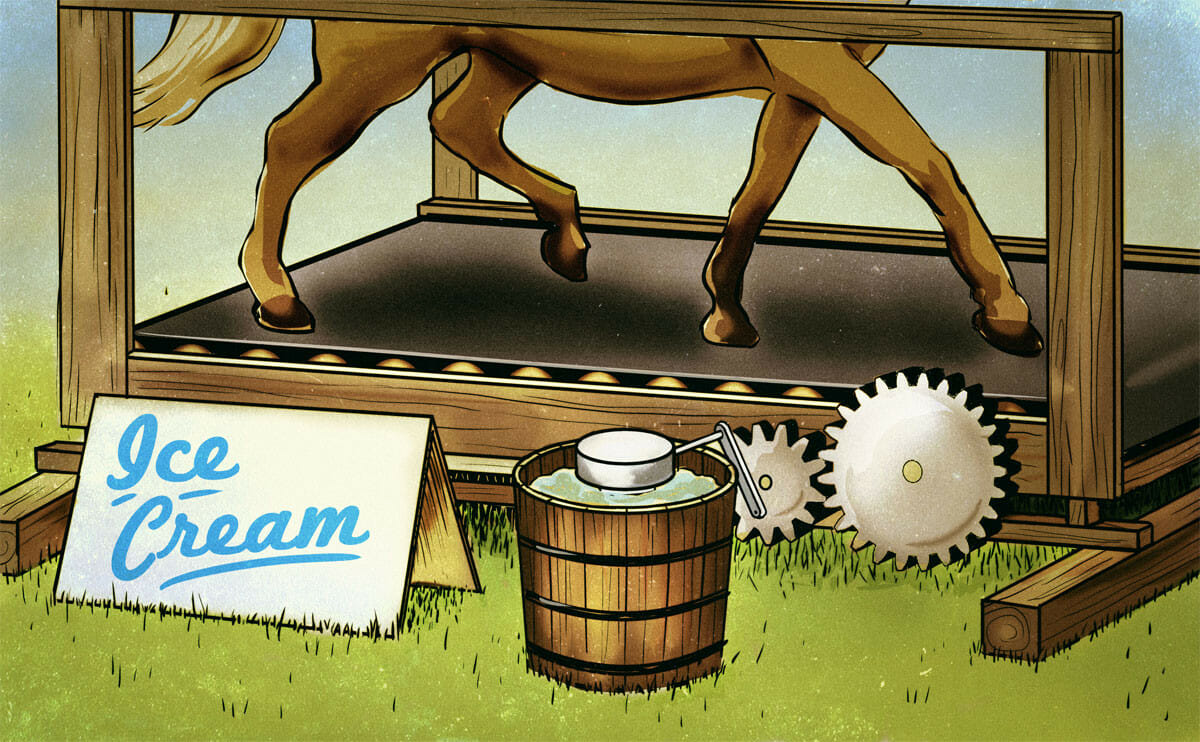 Horse treadmills aren’t anything new. Many veterinary schools have high-tech – and high-impact – equine treadmills for research and diagnostic purposes. “While a horse is running on the treadmill, structural and physiologic systems can be precisely monitored and measured with diagnostic equipment,” says Dr. James Jones, director of the Claire Giannini Hoffman Equine Athletic Performance Laboratory at the University of California-Davis School of Veterinary Medicine.

So how about connecting a horse treadmill to something useful around the farm?

This very thing has been done before with cows. A few years back, a dairy farmer in Northern Ireland made waves by creating the Livestock Power Mill, a clunky contraption that allows a cow to walk on a treadmill while munching grain. The one cow set-up can generate enough electricity to power a few of the very milk machines that work the dairy – almost, if you will, allowing the cow to pay for her own milking.

Although neither Northern Ireland nor the U.S. has embraced this model of self-sufficiency in their dairies just yet, the idea of sustainable energy on the farm is in the air.

But what it lacks in flashy gizmos, the Athens Horse Treadmill makes up for in simplicity and practicality.

The Athens Horse Treadmill originates from an Amish design and thus has nowhere near the industrial fortitude of the techno-rich treadmills found in various veterinary schools. But what it lacks in flashy gizmos like odometers, heart-rate monitors and an endoscope (to actually see inside a galloping horse’s airways), the Athens Horse Treadmill makes up for in simplicity and practicality.

Made mostly of wood, the optimal speed of the Athens Horse Treadmill, depending on the adjustable pitch of the ramp, is 1 ¼ to 3 miles per hour. In other words, plodding. But more importantly, at the back of the treadmill sits a large gearbox. These gears can be connected to a shaft leading away from the treadmill and to almost anywhere your heart desires. Once that horse starts a-ploddin’ you can, quite simply, do cool stuff.

A Kentuckian named Ammon Weaver Jr. is perhaps the best-known user of the Athens Horse Treadmill. A metal worker and machine builder by day, Weaver’s knowledge of machinery, farming and, of course, horses allows him to be one of the most creative of treadmill users.

An older gentleman now, Weaver is seen frequenting Midwestern farm shows where craftsmen gather to show off their wares and skills. It is at these shows that Weaver demonstrates how his draft horses basically pay their own rent and then some.

“It’s still a sideline to our metal-working business, but it’s growing,” Weaver has said.

He began by hooking a treadmill up to an old-fashioned wringer clothes washer so his wife could have help with the chores. Now Weaver has expanded into connecting the treadmill to wood splitters; grinders for corn, wheat, and meat; water pumps and perhaps most importantly of all, five-gallon ice cream churns. 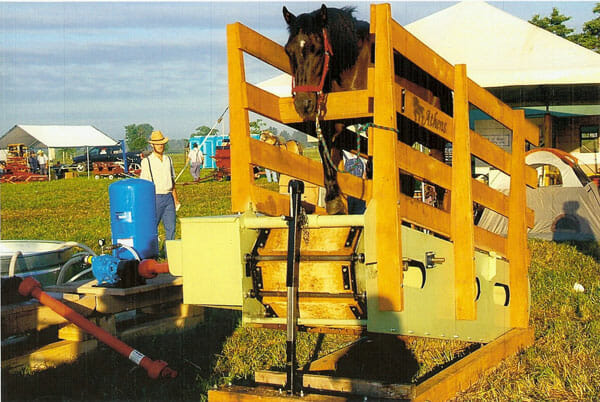 Of course, since horses aren’t machines, there are variations in the energy output due to the natural starts and stops of a slowly moving animal. Weaver often connects his treadmills to an air compressor, which equilibrates output.

In addition to the potential for reducing a farmer’s amount of manual labor, the Athens Horse Treadmill has been touted as a benefit to the horse. Dr. Jerry Sellon, a veterinarian at Dr. Weldy’s Associates, Inc., in Wakarusa, Indiana, has endorsed the Athens Horse Treadmill on Alpha Ag’s website, describing the treadmill as a way to balance the perfect ratio of push and pull on the horse’s muscles. In other words, he says, “Offering a low impact, cardio workout.”

With all this ice cream making and laundry-doing going on, it’s hard to see a drawback to these handcrafted masterpieces. But for one thing, size might be a consideration. Smaller barns often lack the area to store a behemoth built to exercise a horse and if you’re interested in the use of the rear gears for kinetic energy, then those shafts attachments can get quite long.

Price may be another setback, with a treadmill costing roughly $3000 — and that doesn’t even include how you’re going to get it to your barn. But, hasn’t it been said you’ve got to spend a little to make a little? Alpha Ag would probably like you to think so.

would like to contact someone to demonstrate one of these treadmill powered ice-cream makers make and sell ice-cream at our PLOW DAYS AT HOMEPLACE ON GREEN RIVER in Taylor County, Ky April 27th, 2019. A film crew will be there filming for a show on RFD tv that is shown in 27 countries. We can be found at Homeplace Farm on Green River.com. We had approximately 2,500 in attendance

This an exceptionally useful blog I am feeling cheerful perusing this post. I am glad to discover your blog I was searching for data like this. Great work continues composing like this later on. Much appreciated.

Thanks for information nice posting.

With the Amish-inspired horse treadmill, your horse can now make ice cream and we aren’t joking.

Thank you admin for sharing this amazing post. It really helps me. Keep uploading these types of information.

Thanks for sharing the article. Really helpful for me