These farmers tour around the country lobbing jokes at food and ag people. 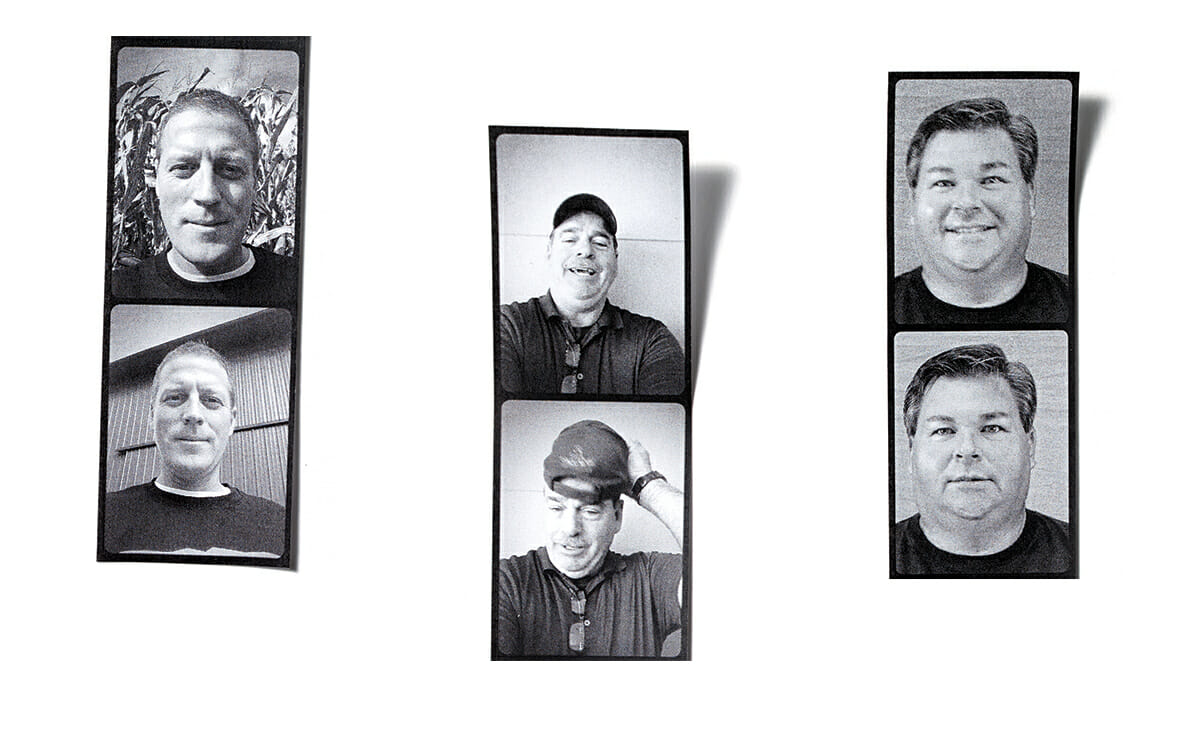 Jerry Carroll does what he calls a “true farmer” greeting in the lobby of a Caribbean-themed casino, a peach-colored concrete complex that interrupts fields of corn close to the Minnesota-Wisconsin border.

“Hey, how ya doin’?” he says, waving his hand, folding the tip of his middle finger so it looks like it’s missing.

Carroll has all his fingers, actually, but he takes the opportunity to show me the map of every snag and tear his hands have been through. “I’m a true farmer, see. I’ve got scars on every finger,” he says.

Scars are one of his calling cards – proof that, as an agricultural comedian, he can relate to his audience. He’s gotten his hands dirty working the land, just like the 400 grain farmers in town for a convention waiting to see him in a ballroom beyond the slots.

‘Sometimes it gets so rough out there fighting the elements – animals dying, crops aren’t growing – when all you can do is laugh.’

Carroll is one of just a few agricultural comedians – farmers who tour the country to lob jokes at agribusiness executives, equipment salesmen and food producers. They hail from a line of rural storytellers like Andy Griffith and radio humorist Jerry Clower, and their deliveries range from the folksy tone of “Hee Haw” to the musings of Garrison Keillor. Some play stand-up clubs, but the bread and butter of ag comedy is in hotels and conference centers.

It’s deeper than “two hogs walk into a barn…” One of the tropes in Carroll’s show is the irony of being both a caretaker and a food producer.

“I feel sorry for anybody who’s never pulled a calf and seen it take its first breath, and then saved its life and its mama’s life,” the fast-talking Carroll says in his hour-long set. “Of course, we’re gonna kill them and eat them later, but that’s just the way we roll.”

Like a lot of comedy, ag comedy provides an outlet to laugh at everyday worries and annoyances. Plenty of jokes highlight the differences between country and city folk – easy targets, sure. But these comedians also talk about frustrations with farm credit services, tensions between consumers and producers, controversial legislation and the simple problem that success on a farm depends on forces beyond your control.

“Sometimes it gets so rough out there fighting the elements – animals dying, crops aren’t growing – when all you can do is laugh,” says Tim Moffett, a comedian and dairy farmer from northern Florida.

In ag comedy, being relatable is just as important as being funny.

“This is one thing you can’t fake,” says Damian Mason, a comic who grew up on a dairy farm in northeast Indiana. “It would be like trying to fake being an astronaut.”

Moffett, who splits his time between corporate shows and stand-up comedy clubs – where he has to “dumb down” the farm humor – prefers the ag gigs. “We can talk about things like commodity prices, and it’s actually funny.”

Between digs at organic farmers and vegetarians, ag comedians make sure to sprinkle in their creds.

“By the end of the night, they know I can run their combine,” says Carroll, who grew up on a 1,600-acre hog and tobacco farm in North Carolina.

Dana Akemann, the event planner who hired Carroll, says the company sought a comic with a clean sense of humor. “But it’s a bonus,” she says, “an added value when we can get someone that can really relate to our clients.”

Carroll embarked on a comedy career two decades ago, doing open-mic nights in Raleigh after 80-hour work weeks on the farm. He’s performed alongside “Last Comic Standing” winner John Reep and Ken Jeong of “The Hangover” films. But, instead of pursuing fame, he kept a day job on the farm.

“The best material I ever write is always in the cab of a tractor or combine,” he says. “For some reason, when I’m picking grain, it just comes to me.”

Mason, 45, got his start in political comedy, impersonating President Bill Clinton at corporate functions. During the Bush administration, he started writing ag jokes. By 2009, his farm-themed sets “took off like prairie fire.”

Tailoring a show to each audience is key, Mason notes. He’ll play to conventional wheat growers in Nebraska one week (lots of gluten-free jokes) and organic produce farmers in Maine thenext. “I take swipes at horse owners, vegetarians, Whole Foods shoppers, everybody.”

As working farmers, comedians are subject to the same issues as their audiences.

‘The best material I ever write is always in the cab of a tractor or combine.’

Moffett, a grass-fed milk producer, recently played a soybean convention where he mocked soy milk, which takes a bite out of his market. “Soy milk comes from soybeans, the same that make biodiesel fuel,” he said. “I tried your’soy milk, and every time I broke wind, it smelled like WD-40.”

The 45-year-old comic wasn’t sure if he got away with it, but the audience laughed.

“I got my point across: I’m pro cow’s milk and I don’t agree with what you guys are doing,” he says. “But I approached it gingerly.”

Carroll ended his set at the Minnesota casino with a story about an accident involving an augur and his overalls that left him naked in a field. He closed with a sentimental speech about safety and the sacrifices farmers make for their jobs.

It clearly resonated. After the set, a half-dozen audience members surrounded Carroll to buy CDs and hear a few more stories. Two of them held up their hands in greeting, showing him their missing fingers.