Intelligent architecture keeps it cool Down Under. 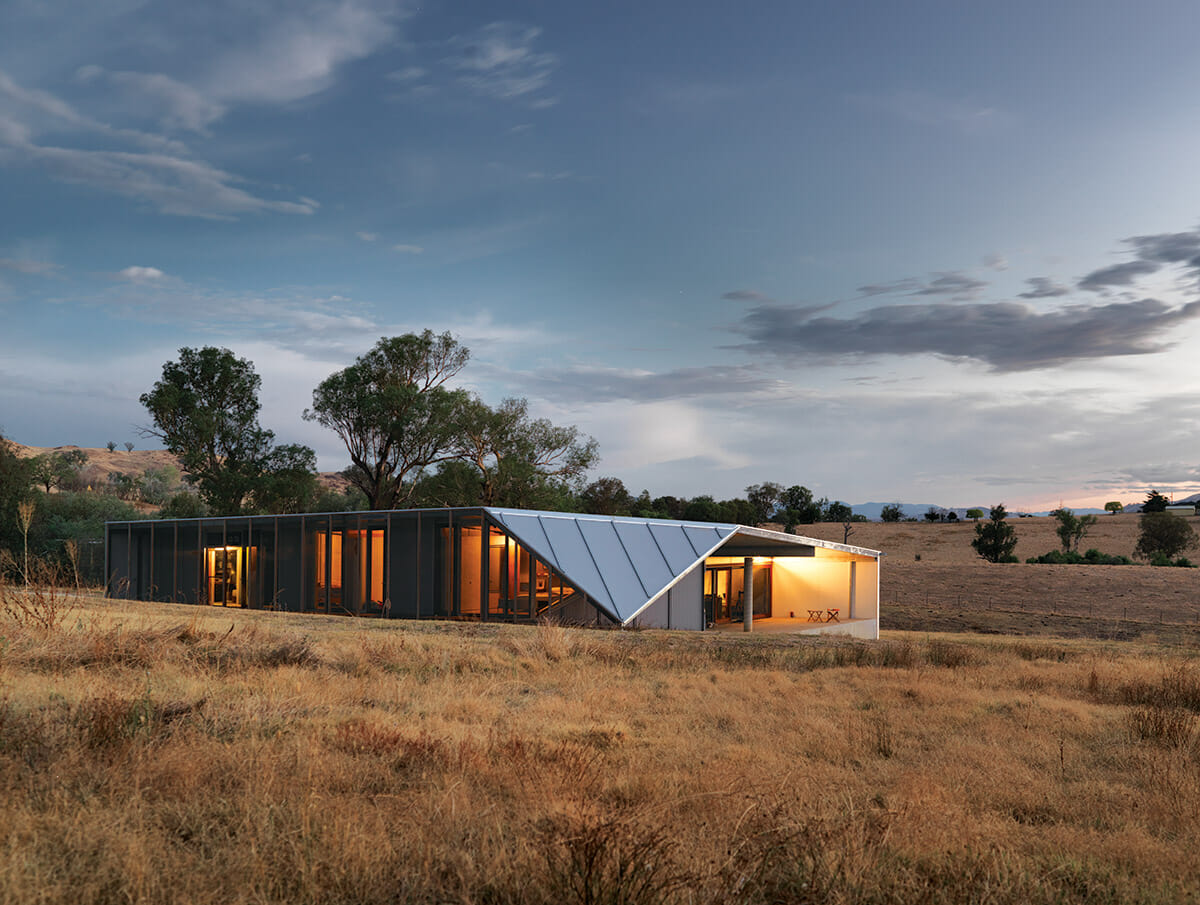 Dr. Alan Luckie was a dream client. “An architect gets only one or two clients like that in a whole lifetime of work,” says Michael Markham, architect and owner of Melbourne-based design firm Tug Workshop.

Markham designed his own energy-efficient home in Melbourne, Australia. When fellow city dweller Luckie visited the house, he knew he’d found the perfect person to fulfill his dream of living both rurally and sustainably. So he hired Markham to build him a home.

According to Markham, there are two schools of green architecture in Australia. One embraces a “hippie aesthetic” that showcases rustic materials such as timber. The second values efficiency and a contemporary look. “I probably belong in that second group,” says Markham, who studied in Chicago and was influenced by the city’s modernist architecture. 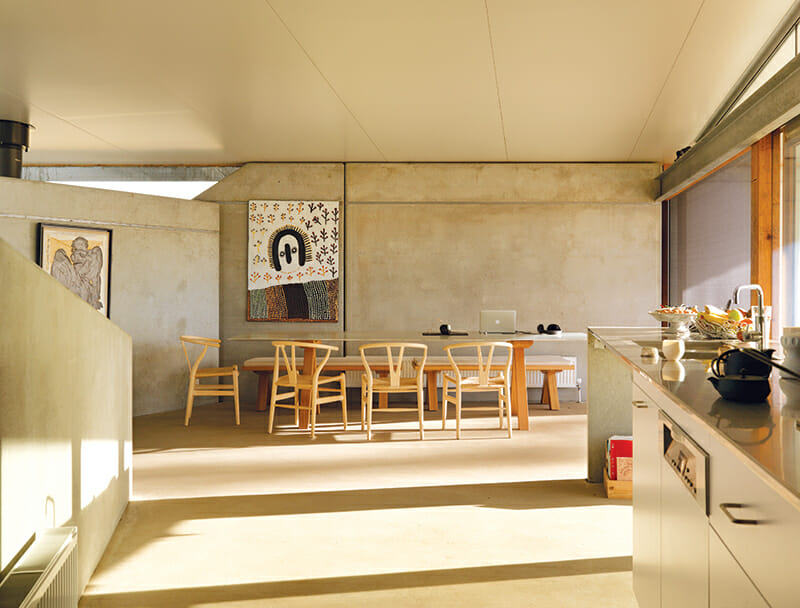 Precast concrete walls were made in a factory, trucked in and positioned with a crane.

Bethanga House has no frame. Instead, concrete wall panels arranged around a central courtyard reach about four feet into the ground. These deeply anchored walls allow the house to absorb themore stable subterranean temperature, which is cooling in summer and warming in winter. The exterior and the roof are wrapped in steel panels with polystyrene cores.

Markham realizes that polystyrene, which doesn’t biodegrade, has long been derided in environmental circles. But he argues that polystyrene is reusable in the sense that it can be recycled, and its insulating properties are vital to reducing the energy use of the home. The key is to carefully collect all the waste on site, instead of releasing it into the environment, he says.

Concrete is often dismissed as cold, a material better suited to a prison than a home. And Markham admits that concrete is usually cold to the touch. But, thanks to the way he has sunk the walls into the ground and insulated them, the exposed concrete interior of Bethanga House is not.

“The extraordinary thing about this building is that the concrete’s warm,” says Markham. “You walk into this building in the winter without having the heating on and the whole interior’s warm. And you put your hand on the concrete and it’s just a little bit cooler than your body temperature, really. It’s not freezing cold.”

Concrete played an important part in marrying the dwelling to the landscape. As workers tracked red clay earth into the house on their boots, it penetrated the surface of the kitchen floor, which hadn’t set. When the time came to clean, it was a permanent fixture. Panicked, the workers fetched Markham and showed him the floor, now tinged red. “I looked at it and I just went ‘Wow, that’s beautiful,’ ” says Markham. “This was one of those happy little accidents.”

Many homes in Australia rely heavily on air conditioning to get through boiling temperatures; Bethanga House uses about a quarter of the air conditioning typical homes do. And during cold bouts, the entire home can be heated by starting a fire in the hearth, fueled with eucalyptus branches collected from the grounds. 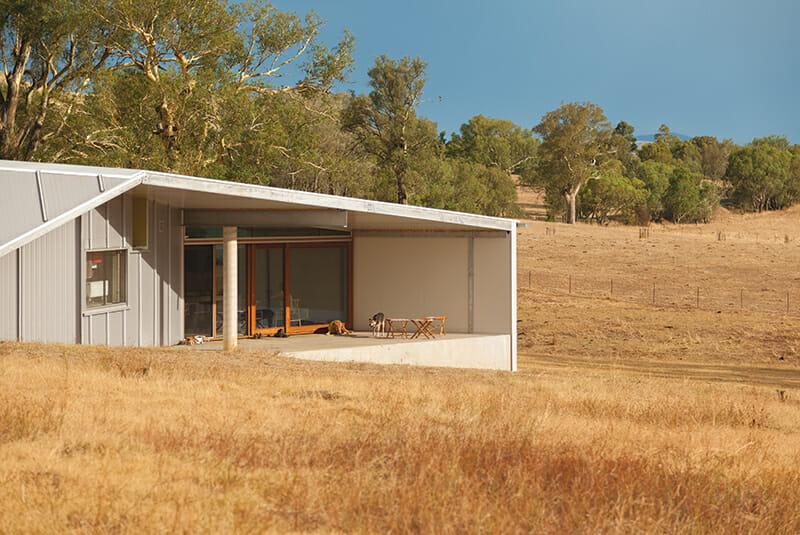 The concrete walls are sunk three to four feet deep into the soil.

The house also features solar-heated water. Markham says it is so efficient, Luckie hasn’t paid an energy bill in the two-and-a-half years he has lived there. The home uses about 47 percent of the energy of a conventional dwelling.

Luckie, a New Zealand native, grew up on the fringe of a city but was fascinated by a nearby farm and would hop the fence to go wandering. As an adult, he grew disenchanted with the suburbs, where energy-sucking homes stood side by side, cloistered from the natural world. His move to the country afforded him space and freedom.

“I don’t have to follow any concerns of neighbors that say: ‘Oh, I don’t like that kooky house that’s going to devalue our property,’ ” says Luckie.

His neighbors now include a small herd of Angus beef cattle, dogs, cats, chickens and his daughter’s 25-year-old horse, Costa. He wanted to live in a “quintessential Australian shed” among his animals and produce rather than in a fortress on high (a fence keeps the cattle from getting too close to the house). His grounds include vegetable gardens and orchards. His fruit trees are enclosed in large cages to keep out hungry cockatoos, and his chickens forage inside, safe from foxes. Luckie – who still works as an ophthalmologist – is not shy about calling his outfit a “hobby farm,” which he runs not for profit but for pleasure. Some days he performs the humble task of collecting cow poop to fertilize the orchards.’ In the mornings he squeezes fresh juice from oranges harvested just outside his own door.

‘”You get the sense that you’re eating the fruits of your labor,” says Luckie.

Top: Bethanga House is protected from the wind by a ridge. Owner Alan Luckie wanted a house that “sat on the land” close to his animals.