A Potato Flies Around the Room - Modern Farmer
Lifestyle

A Potato Flies Around the Room

A history of the famous potato that flew around your room. 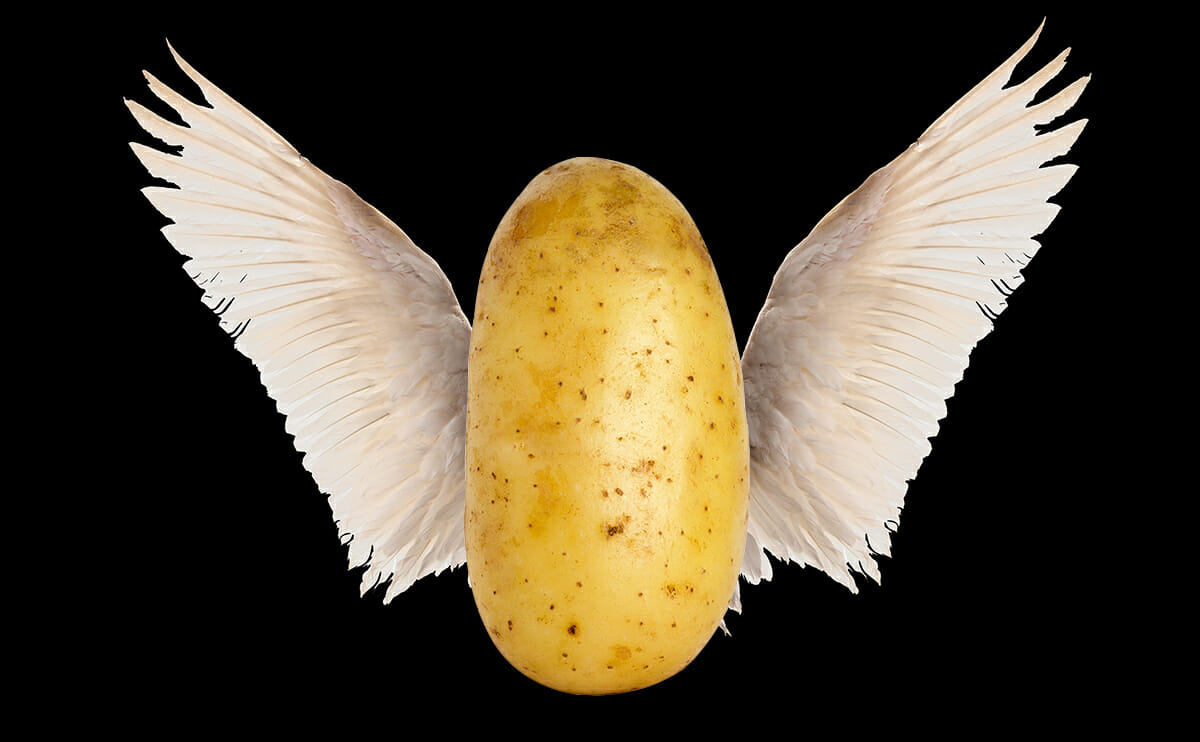 When Vine user pg bree posted her cover of Frank Ocean’s “Thinking ‘Bout You” on October 14, there was something in the clip that didn’t seem right. Instead of singing, “A tornado flew around my room before you came. Excuse the mess it made,” the girl from Louisiana sang, “A potato flew around my room.”

Obviously, people have noticed the difference between tornado and potato. A meme was born.

Thirty-six days after the clip was posted, it has received more than 218,000 likes, 181,000 revines, and 35,000 comments. This new Internet phenomenon is also a result of another clip on Vine that followed pg bree’s clip: flying potato courtesy of user lil syd from the trap. The clip shows a real potato, hung from a ceiling fan, circling in the air. It’s the perfect visual for the accidental audio, and currently has over 200,000 likes, 187,000 revines, and 23,000 comments. Its popularity has made a lot of people think that lil syd from the trap was the one who sang the potato song; she recently wrote on her Vine profile: “I’m not the one singing the potato vine.”

And, as of the time this article is being written, pg bree’s and lil syd from the trap’s clips have run over 14 million loops each.

These numbers are from Vine only, but the potato has flown to other social media platforms as well. Type “a potato flew around my room” in your Google search box and you’ll get well over 100,000 results. You can follow @potatoflew on Twitter, become a fan of ‘A potato flew around my room before you came‘ on Facebook or enjoy a great rendition from #apotatoflewaroundmyroom on Instagram.

Examples of individual interpretations range from cute illustrations of potatoes floating in the air with smiling faces, real potatoes singing the lyric, potatoes with wings (various sizes and colors) and Princess Anna from “Frozen” singing this song. Even Chucky from Child’s Play joins this potato game, though he doesn’t look any less creepy singing the song. (To be more accurate, not the entire song, just this one lyric. The sentence that will never leave your thoughts once you start listening to it.)

Considering how famous the flying potato is, it shouldn’t be a surprise to know that there were some people using a potato that flew around the room as their Halloween costume theme this year. If you saw someone with a potato hanging around their neck, now you get it.

We’re wondering what Frank Ocean thinks about the potato version of his song. So far he hasn’t said anything about it publicly (though we assume a press conference will be announced shortly.)

Final fact: The potatoes seen in most of these memes are russet potatoes and yellow potatoes. Both are good for mashing, baking, roasting and, recently, flying.