The secret to Argentinian grills? Simple grates positioned over a wood fire, a cooking method that allows for intense smoky flavors and very high heat. 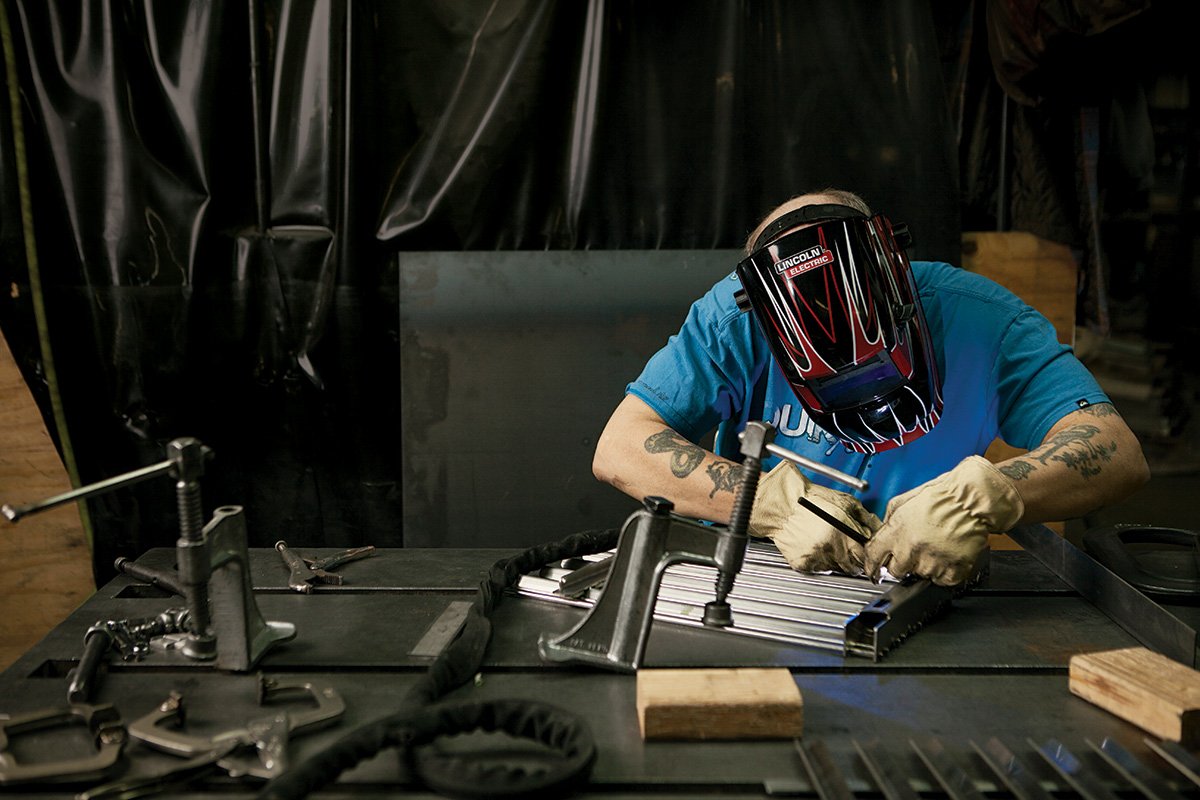 "Chef" Bill welds together a V-channel cooking surface, used to catch food juices so they can be used to baste.
Share
Tweet
Pin
Email
6K Shares

When Time magazine sent foreign correspondent Charles Eisendrath to Paris in the 1960s and ’70s, he fell in love with the food. When the magazine gave him a post as bureau chief in Buenos Aires, he fell in love again, this time with the Argentinian tradition of grilling meat over an open fire.

But when Eisendrath returned to the United States, settling with his family in Michigan, he found his new home devoid of the flavorful jus of dishes served in France and the smoky heat of Argentinian wood-fired cooking. To fill the void, he developed a new kind of barbeque device called The Grillery.

Argentinian grills are straightforward affairs: simple grates positioned over a wood fire, a cooking method that allows for intense smoky flavors and very high heat. Eisendrath’s model, built with the help of local welders after more than a dozen designs, was a portable stainless-steel contraption that included a cooking grate with small drains to catch meat juices, and a crank to move the grate up and down for heat control. In the early 1980s, The Grillery made its debut at his dinner parties. Then friends began requesting their own. The buzz traveled, grills were sold and the company Grillworks was born. Company lore claims James Beard personally asked Eisendrath to show him a grill and then bought it on the spot. 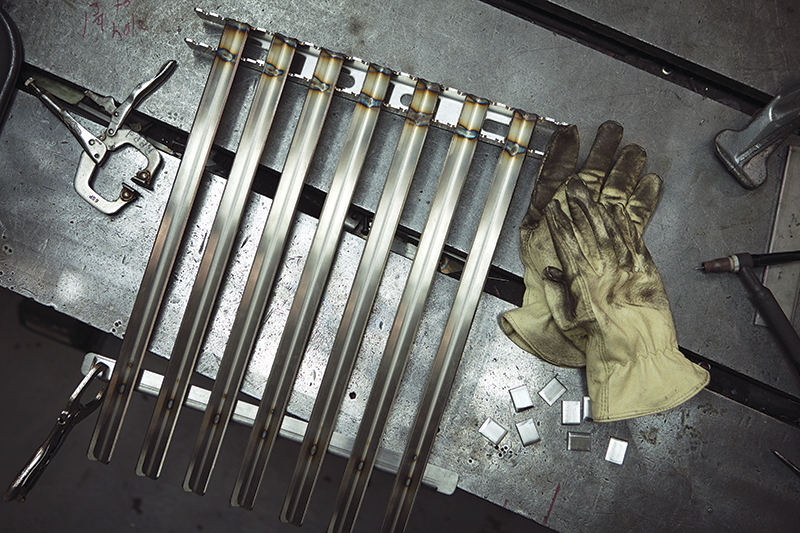 A grill surface clamped and ready for finishing.

The business moved along nicely for decades. It remained small, run by Eisendrath and his wife, Julia, who became default treasurer, bookkeeper and secretary all at once. Until 2006, when Eisendrath, who was working as a professor of journalism at the University of Michigan, decided to shut his hobby company down. That’s when his son Ben, who had grown up chopping wood for the family grills and recently left his job as a director at AOL, stepped in. “I couldn’t bear it, not being there,” says Ben.

His timing couldn’t have been better. In the past few years, Argentinian-style grilling has been gaining fans around the world, due in no small part to Francis Mallmann, an Argentinian chef. His 2009 cookbook, “Seven Fires: Grilling the Argentine Way,” extols the signature texture and taste of open-fire cooking and is effectively a love letter to flame.

“I am drawn to fire and the aroma of things cooking over wood,” writes Mallmann.

Cooking over wood fire can give meats a rich, distinctively smoky flavor and add intensity – and intimacy – to the act of cooking your food. Oliver Schwaner-Albright describes it in the New York Times: “as much a sport as an art – it’s more instinctive than cooking with a gas grill, more nuanced than cooking with charcoal, and more athletic than both.”

Jeremy Stanton, head of Fire Roasted Catering in Great Barrington, Massachusetts, designed and had built his own Argentinian-style grill – an infiernillo, or three-level steel grill with an open fire both above and below the cooking food – after seeing it in Mallmann’s book. “I love the look in people’s eyes when they come over and see what we do,” says Stanton. “You have so much heat and so much control, and the food is so beautiful. The quality of the heat and quality of the steel gives you this amazing crust that you can’t achieve on your home stove or your home grill.”

Mechanical engineer Gary Knackstedt started his grill-making company, NorCal Ovenworks, in 2011 near Sacramento, California. After designing and building a pizza oven in his garage, he decided he wanted an Argentinian grill. Unable to import the one he wanted, Knackstedt designed and then hired local welders to build his ideal grill.

“In America we have left cooking on the ground and cooking over a natural fire behind,” says Knackstedt. “Now we all cook on gas grills in the house. And so we pretty much lost the taste and smell of cooking over a fire.”

Knackstedt makes a selection of open-fire grills to order, priced between $1,800 and $5,000. He says he’s sold more than 780 to private residences and restaurants in two and a half years. His grills are popular with people who read the Mallmann book, and those who have visited Argentina, Chile and Uruguay. “They come back hungry for a taste of that kind of meat,” he says.

When Ben took over his father’s company, he knew he had to scale the business. He first digitized his father’s hand-drawn designs and then found welders to make a few small grills, similar to his father’s models. They sold around 40 that first year.

Ben splits his time between Washington, D.C., and New York City, fielding most calls for the company himself and working with potential customers on individual designs.

It hasn’t always been smooth. In 2008 Dan Barber, chef at Blue Hill at Stone Barns, called asking for a grill – a big one, one that could withstand the extreme use and heat of a high-functioning professional kitchen.

“I thought our grills were indestructible until we made one for Dan Barber,” says Ben, chuckling. “In home settings, our grills last generations. But Blue Hill used it so hard, they destroyed it in six months.” The Grillworks team remade the grill, factoring in the high wear and tear and heat, lining it with brick, working with the chefs’ needs. “The Infierno 96 is a result of Dan Barber ruining his.”

But it’s not only big names clamoring for his grills. In 2010, Ben received a letter from a soldier deployed in Afghanistan, asking if it would be possible to send grill parts abroad – he missed grilling. Ben’s response? “Screw it.” He decided to ship four whole grills to the soldier overseas. As we talk, Ben is sitting near one of his gargantuan wood-fired grills, built into the wall at Manhattan tapas restaurant Tertulia. Shifting a little in his seat, the grillmaker pulls out a metal coin emblazoned with a signet from the 20th Special Forces Airborne Group from his wallet and slides it across the table with a smile.

looking forward to my subscription