Slaughter-Free Milk: Will Customers Pay More to Put Cows Out to Pasture?

At the first slaughter-free, grade-A dairy in the U.S., farmers hope that customers will pay more for milk where the cows peacefully retire rather than be sold for slaughter. 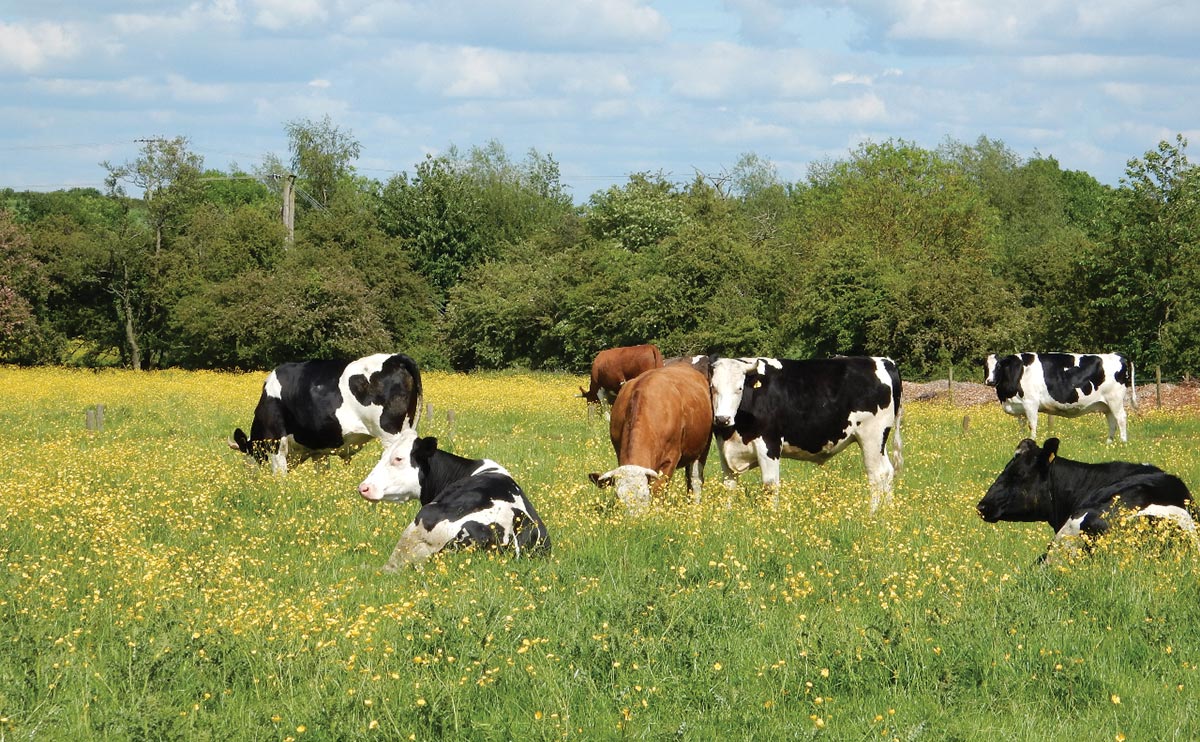 Gita Nagari Farm is not most dairy farms.

At the Pennsylvania dairy, cows are not pushed for maximum milk production. The heifers aren’t bred until after the age of three. They get at least one year of rest after giving birth and have a maximum of six calves in their lifetimes. Newborn calves remain with their mothers, nursing on demand, for six months. Instead of sending male calves to market, the farm puts them to work plowing fields or hauling firewood.

“What we’re doing is not just a matter of food production,” says Parijata Dasi, co-president of Gita Nagari Farm. “It is entrenched in our value system.”

At the core of the slaughter-free philosophy is a lifetime commitment to the cows.

Gita Nagari Farm is the first slaughter-free, grade-A dairy in the nation. The Hare Krishna community that operates the 350-acre farm has been producing milk for almost four decades but it wasn’t until 2013, when an investor provided $200,000 to help establish a micro-dairy, that the community started selling slaughter-free milk to the public. When the cows stop giving milk, they “retire” on the farm and receive ongoing care because, as Dasi, explains, “The cows have worked hard and provided for us; when they’re not productive, they deserve to be taken care of.”

The milking herd of 28 Brown Swiss cows produces up to 600 gallons of milk per week; one third of the milk is sold through a CSA program (the other two thirds are kept for community consumption).

Dasi is quick to point out that the slaughter-free model doesn’t just spare the lives of the cows, it focuses on their wellbeing. At Gita Nagari Farm, the cows are pasture-raised, fed organic treats and benefit from vet care and regular brushing; volunteers even play soft music during milking. Of course, the lifelong care comes at a cost.

At $10 per gallon, the price of slaughter-free milk is almost triple the cost of whole milk, which retails for an average of $3.69 per gallon. The price reflects the cost of producing the milk as well as calf care and “retirement” costs for the herd. (The cost of labor isn’t factored into the price because the farmhands are volunteers).

In the U.K., Ahimsa Dairy Foundation produces 20,000 liters of milk per year (about 100 gallons per week) and delivers the milk to customers throughout London for costs roughly $15.28 per gallon and a nominal delivery fee. The farm started producing slaughter-free milk in 2011.

“We were concerned about the cruelty inherent in much of the contemporary dairy industry, not least the culling of cows as soon as they become infertile or go dry,” says foundation director Sanjay Tanna.

In need of support to get started, Ahimsa Dairy Foundation partnered with UK-based organic farm Commonwork. The dairy is in the process of transitioning the herd to its own farm in Leicester, where its heifers will be only be bred via natural insemination every three to four years, calves will remain with their mothers for six months and all milking will be done by hand.

To offset the costs, which Tanna notes “are greater than a conventional dairy,” the farm has launched a fundraising campaign and offers a “Sponsor a Cow” program that accepts donations for the care of the herd.

Both Gita Nagari Farm and Ahimsa Dairy Foundation embrace the Indian cultural tradition of protecting cows from slaughter. The farms operate as nonprofit organizations and rely on a combination of donations and revenues generated through milk sales to cover their operating costs.

“Our model is still new but certainly there is an appetite from the public and interest from some farmers,” says Tanna. “We have a loyal customer base and are constantly getting requests for our milk from all over the country [that] we can’t satisfy.”

But the growing demand presents a dilemma to slaughter-free dairies. Keeping the herd small, according to Dasi, helps keep costs down and ensures the farm is sustainable.

“For a conventional farmer, it’s not a big deal to expand the herd because if he doesn’t need the cow, he sends it to market,” she says. “We’re cautious about expanding our herd because every time we do, we know we’re making a commitment to take care of [the cows] for 20 years.”

Some of the farmers Dasi has talked to about the slaughter-free approach have insisted that the farm is losing revenues because of its “failure” to push for milk production or sell bulls to the beef market but she is quick to defend the slaughter-free movement. Despite the fact that her own organization operates as a non-profit, Dasi believes that even with higher costs to produce slaughter-free milk, small for-profit dairies could make the switch. She has spoken with neighboring Mennonite farmers about transitioning their herds and their responses have been favorable — in part because there are some financial benefits to the slaughter-free approach: Most farmers receive about $1.50 per gallon from a milk co-op (and up to $3 per gallon for organic milk), a fraction of the retail price for slaughter-free milk.

“These farmers work so hard to produce milk but don’t get much for it,” she says. “A lot of conventional dairy farmers feel trapped by the system [and] we want to tell them about the alternatives.”

In fact, both Dasi and Tanna believe that the key to meeting the demand for slaughter-free milk lies in convincing other farmers to adopt the practice and are eager to help conventional farmers make the switch.

“We are keen to establish our system as a sustainable model which can be emulated by other farmers,” Tanna says. “In time, we would like to see a network of slaughter-free micro-dairies around Britain.”

Dasi is also hopeful that awareness of the slaughter-free model will continue to grow.

“I believe it is a sustainable and economically viable model, but it does take a commitment and community support,” she says.

Popular
The Future of Hay Drying in AmericaLindsay Campbell
How to (Actually) Get Rid of Fruit FliesEmily Baron Cadloff
7 Smokable Plants You Can Grow That Aren’t MarijuanaBrian Barth
The Story of Brazil Nuts is Kind of NutsAndrew Amelinckx
6 Differences Between Llamas and AlpacasAndrew Amelinckx
Explore Modern Farmer
Related
Plants
There’s a Pumpkin Fungus Among UsLindsay Campbell
MTMF
How One Organization is Restoring a Community of Black FarmersEmily Baron Cadloff
Plants
Organic Soybean Prices Spike Despite Huge US Soybean ProductionDan Nosowitz
Environment, Technology
The Future of Hay Drying in AmericaLindsay Campbell
wpDiscuz
We use cookies on our website to give you the most relevant experience by remembering your preferences and repeat visits. By clicking “Accept”, you consent to the use of ALL the cookies.
Cookie settings ACCEPT
Privacy & Cookies Policy