The Do's and Don'ts of Water Usage - Modern Farmer
Lifestyle

The Do’s and Don’ts of Water Usage

Some tips for making your water use just a little bit easier on the planet - and in many cases, on your wallet as well. 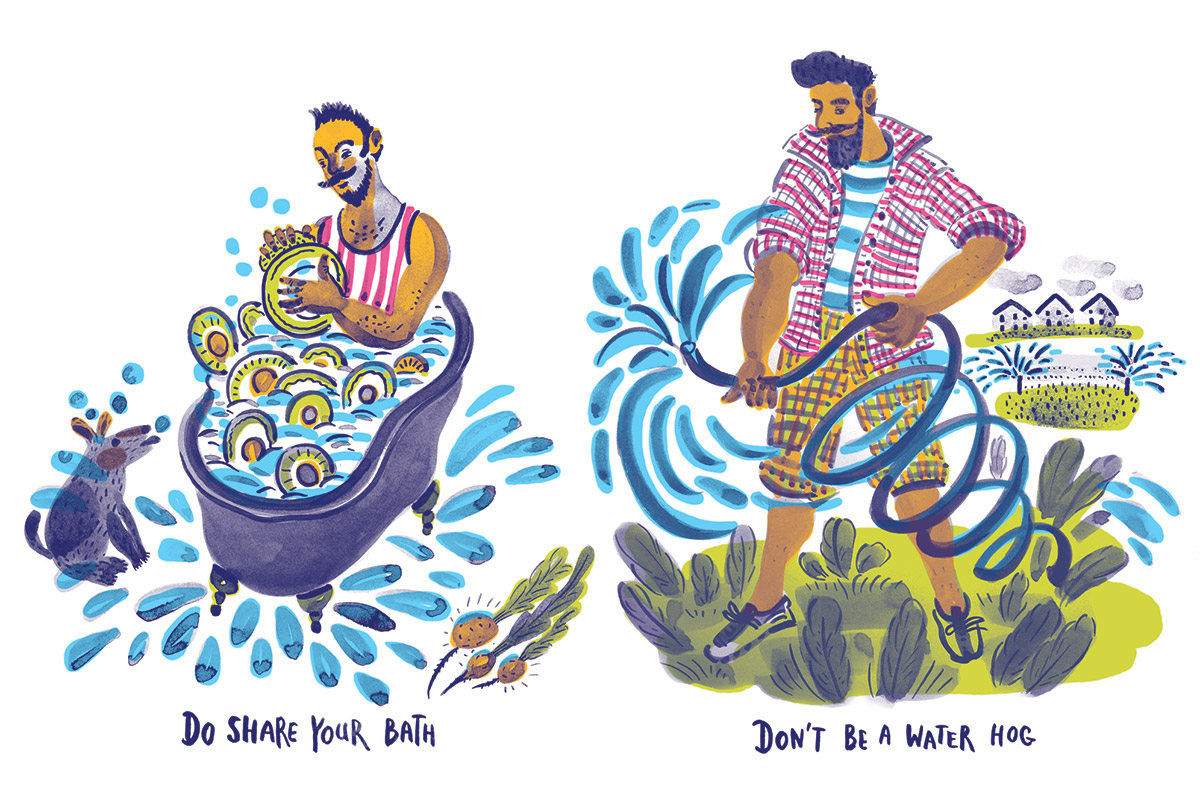 DO: Fix leaks and drips. Is losing a few drops of water here or there not a big deal? According to Tracy Quinn, water policy analyst at the Natural Resource Defense Council (NRDC), we waste a trillion gallons of water from household leaks each year. “Close that tap!” she says.

DO: Hook up laundry to your garden. This is a twofer solution: By watering your garden with gray water from your washer, you can keep your plants fed while avoiding hundreds of gallons from going down the tubes. (But make sure you only use biodegradable, nontoxic soap.)

DO: Protect your soil. Claire O’Connor, agricultural water policy analyst at the NRDC, says that better dirt means less watering. To have richer soil, in either a farm or garden, O’Connor recommends adding compost or mulch to your growing areas.

DO: Use your dishwasher (but make sure it’s full). It turns out that using the appliance is way better than washing by hand. Quinn says that hand washing can use 2 gallons every minute, as opposed to the 4 to 6 total gallons consumed by a dishwasher. “So unless you can wash all your dishes in under two minutes … ,” she says, too polite to state the obvious: You really can’t.

DON’T: Have a grass lawn. They are thirsty, old-fashioned and frankly, uncool. Some drought-stricken cities (like Los Angeles) have been paying residents to tear them out and replace with less water-intensive plants. Native-plant gardens, FTW!

DON’T: Use your sprinkler to water the sidewalk. O’Connor likes sprinklers that are lower to the ground, and “don’t lose as much to wind or evaporation.”

DON’T: Cool off with long showers and baths. Showers are a huge water-waster (about 20 percent of water use in the home), and baths, while typically less frequent, are even worse. Quinn recommends upgrading to newer showerheads and faucets: A 20-minute shower with an older head can use up to 100 gallons.

DON’T: Start planting in the middle of the summer – or water during afternoon hours. The extra heat means evaporation, and that means wasted water.

DON’T: Waste food. Tossing out edible produce or half-eaten meals is a huge source of water loss. All told, 25 percent of the water used in the U.S. every year goes to food that no one eats. Make sure, says O’Connor, to buy what “you actually use.”