Just a decade ago, small-batch Mexican liquor had what you might call a "limited global presence.” But now restaurants from Beijing to Copenhagen stock hundreds of small-batch tequilas and mezcals. 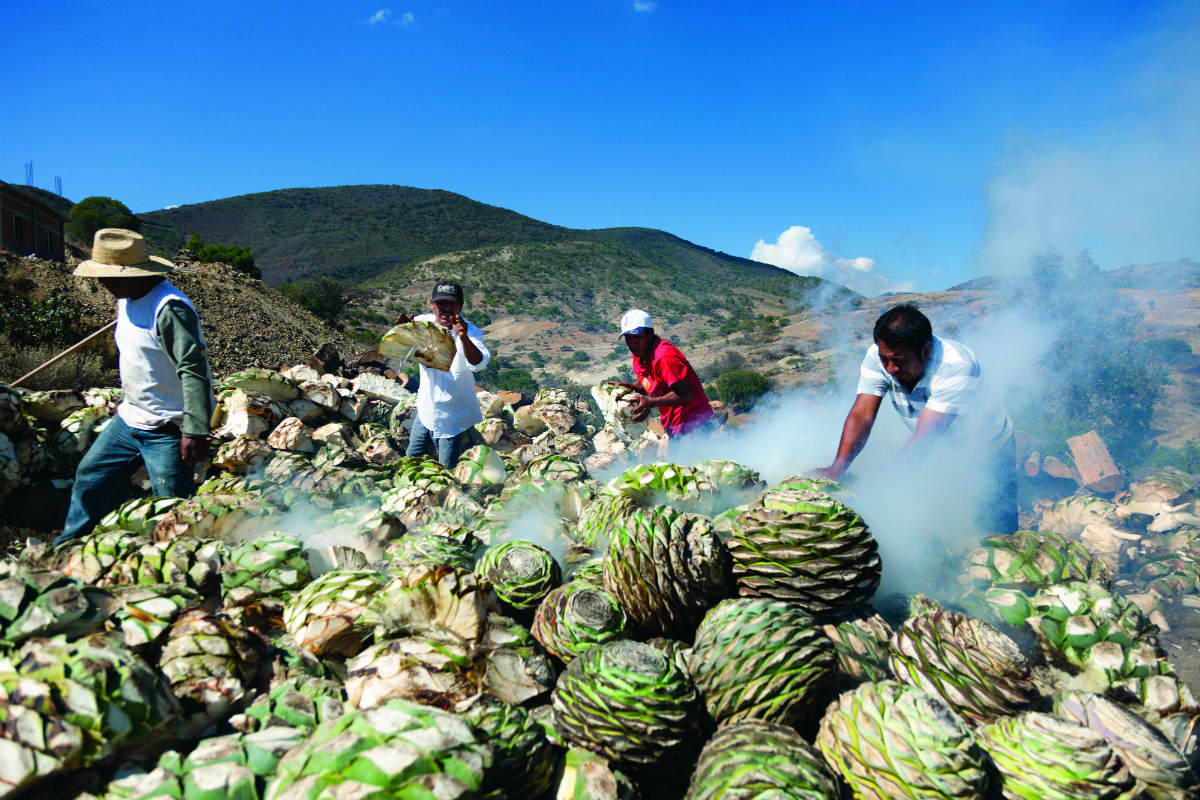 Just a decade ago, small-batch Mexican liquor had what you might call a “limited global presence” – especially in restaurants. At most places outside Mexico, tequila was just the base booze for your syrupy margarita; high rollers could order PatrÁ³n. But mezcal? Never heard of it.

Now restaurants from Beijing to Copenhagen stock hundreds of small-batch tequilas and mezcals. “Mezcalerias” like La Urbana in San Francisco pair obscure mezcals with high-concept riffs on Mexican food – think seared snapper with corn foam and a purée of huitlacoche (corn fungus, a delicacy). Margaritas are still a thing, but even more so is “sipping tequila,” served neat to set off the flavors of your food.

“Mezcal and tequila are our wine,” says Alex Stupak, chef at the modernist Mexican restaurant EmpellÁ³n Cocina in Manhattan.

Since Rick Bayless opened Chicago’s Frontera Grill in 1987, upmarket Mexican food has adopted some swagger. These days, diners of means can get lobster in their queso fundido, wagyu beef tartare in their tacos. Some Mexican menus name-check their farm sources; others list their chefs’ fine-dining credentials.

So, naturally, you’re going to want some impressive spirits with your meal.

Around the world, tequila sales have been on the upswing for years. In the last decade, annual global sales have grown to $2.2 billion; the U.S. alone imports 13 million cases per year. Frat favorite Jose Cuervo still dominates the market, but small-batch sipping tequilas are now finding a niche alongside artisan gins and bourbons. High-end entrants like Casa Dragones ($275 a bottle) and the Sean Combs”“backed DeLeÁ³n ($120 to $1,000 per bottle) have a new cachet, at least among a certain subset of consumers.

“Ever since the recession ended, there’s been increased demand for handcrafted, small-batch everything,” says Kara Nielsen, culinary trend analyst, who notes that the prominent placement of high-end tequila on HBO’s “Entourage” certainly helped pique interest.

The clamor for tequila’s smoky cousin may be more recent, but it’s catching up fast. Global mezcal exports grew over 50 percent between 2009 and 2011. Unlike tequila, which is always made with blue agave, mezcal can be made from at least a dozen different agave varieties, each with its own terroir. Mezcal’s agave mash is further enhanced through distillation in clay or copper pots, using local techniques passed down for hundreds of years (see sidebar pg. 39). Some mezcal is sold right after distillation, while some is barrel-aged for up to a year (one company makes a rare, seven-year mezcal). Also, while tequila’s blue agave is frequently grown in large industrial operations, other agaves are often harvested from the wild. Camper English, a Bay Area cocktail writer, says that’s the core of mezcal’s charm.

“There’s almost a rebellion against tequila, like it’s part of some big industrial machine,” he says. “Mezcal is as smallbatch as you can get; when you tell people their agave was hand-harvested from like, this one obscure hillside, they go nuts.”

Of course, you can’t discuss mezcal without mentioning its singular feature: a deep, robust smokiness, paralleled only by Scotch whisky. It typically acquires this flavor from roasting agave a few days in a pit oven, essentially an earthen mound over pits of hot rocks. It’s a process that ramps up mezcal’s flavor – as well as its artisan appeal.

Those unfamiliar with Mexican spirits may discover layers of complexity in both tequila and mezcal. Stupak, who admits he favors mezcal over tequila, pairs these liquors with food that may seem unfamiliar – say, manila clams in a tripe stew, or sea urchin mousse served with thick corn masa. Stupak suggests you savor every drop.

“In the U.S., you pour someone a tequila, they tend to chug it like a shot,” he says. “In Mexico, you’re going to sip it slowly with your meal. People here are just getting used to this idea.”

How Mezcal Got Big, Yet Stayed Small

Nathaniel Parish Flannery
Mezcal is having a moment, but the economics of its small-batch production mean that its growth is not all that it could be.
Over the last five years, mezcal exports have more than doubled. During the same period, within Mexico, the number of bars, restaurants and stores selling mezcal increased more than sixfold.
Despite these encouraging numbers, some experts worry the boom benefits just a few large labels. Mezcal is traditional to Oaxaca, one of Mexico’s poorest states, where many speak the indigenous lan- guage Zapotec and have limited Spanish skills. Many have no cell phone service and some lack direct access to roads.
Currently, there are about 25 brands of mezcal available for retail sale in New York, a fraction of the total number of family-run distilleries in Oaxaca. After all, aficionados value the flavors produced by traditional production.
They don’t have advisors to tell them what their product is worth. They could earn a lot more,” says Alejandro Champion, co-owner of the Mezcal UniÁ³n brand, currently sold in Mexico and New York.
Many local makers sell roadside bottles for $3, while premium brands sell for $25 to $80 at boutique stores.

The new economics of mezcal and tequila, favoring small operations, mean that upscale bars and restaurants stock huge varieties of the stuff. On EmpellÁ³n’s liquor shelf, you’ll find 50 different strains of mezcal, and over 90 tequilas. Cantina Agave, a Beijing restaurant offering lengua chimichangas and pasilla tortilla soup, offers over 100 different bottles of tequila. And when the nouveau-Mexican spot La Urbana opened this fall in San Francisco, it had over 50 mezcals; it has since added dozens more.

These restaurants are helping build interest in high-end Mexican spirits, but it’s a slow progression. According to Nielsen’s statistics, bottles of tequila valued at more than $60 still only make up 0.6 percent of the U.S. market. Mezcal had a record year of exports in 2011 (the last year with available data), shipping 72,000 cases around the world; for comparison, Scotch whisky exports topped 92 million cases that same year. Even if mezcal exports have grown tenfold in the last two years, they still only make up a wee slice of the small-batch spirits pie.

Still, every movement starts somewhere. Demand for artisanal tequila and mezcal increases every year, as does the proliferation of high-end Mexican restaurants. And trend forecaster Nielsen sees this as merely the beginning. “Once people have tasted something better, it’s not like they’ll go back to garbage tequila,” she says. “Lucky for us.” 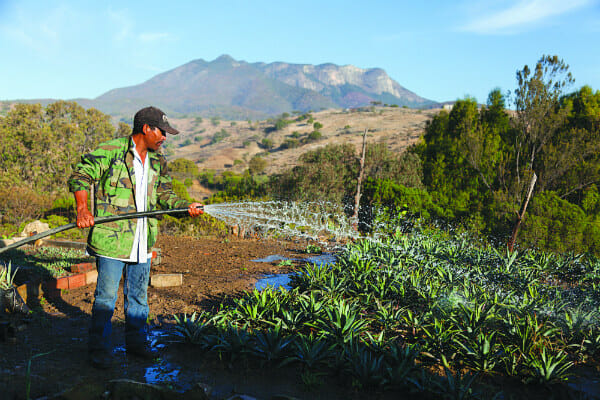 Mezcal UniÁ³n employee Pedro Hernandez waters the new agave plants in the nursery. It is not unusual for them to grow over 8 feet tall.

Popular
Yes, the Government Really Does Stash Billions of Pounds of Cheese in...Emily Baron Cadloff
How to (Actually) Get Rid of Fruit FliesEmily Baron Cadloff
7 Smokable Plants You Can Grow That Aren’t MarijuanaBrian Barth
Paddleboarding Goats Make a Splash on Prince Edward IslandNoah Lederman
What to Do With an Abundance of PeppersShelby Vittek
Explore Modern Farmer
Related
Food & Drink
Food Inflation Is Eating Up Grocery BudgetsShea Swenson
Plants
This Seed Detective Travels the World Tracking Down Lost CropsEmily Baron Cadloff
Books, Cookbooks
In Her New Book, Molly Yeh Goes Back to BasicsEmily Baron Cadloff
Food & Drink, Plants
In Awe of the PawpawDanny Childs
wpDiscuz
We use cookies on our website to give you the most relevant experience by remembering your preferences and repeat visits. By clicking “Accept”, you consent to the use of ALL the cookies.
Cookie settings ACCEPT
Privacy & Cookies Policy