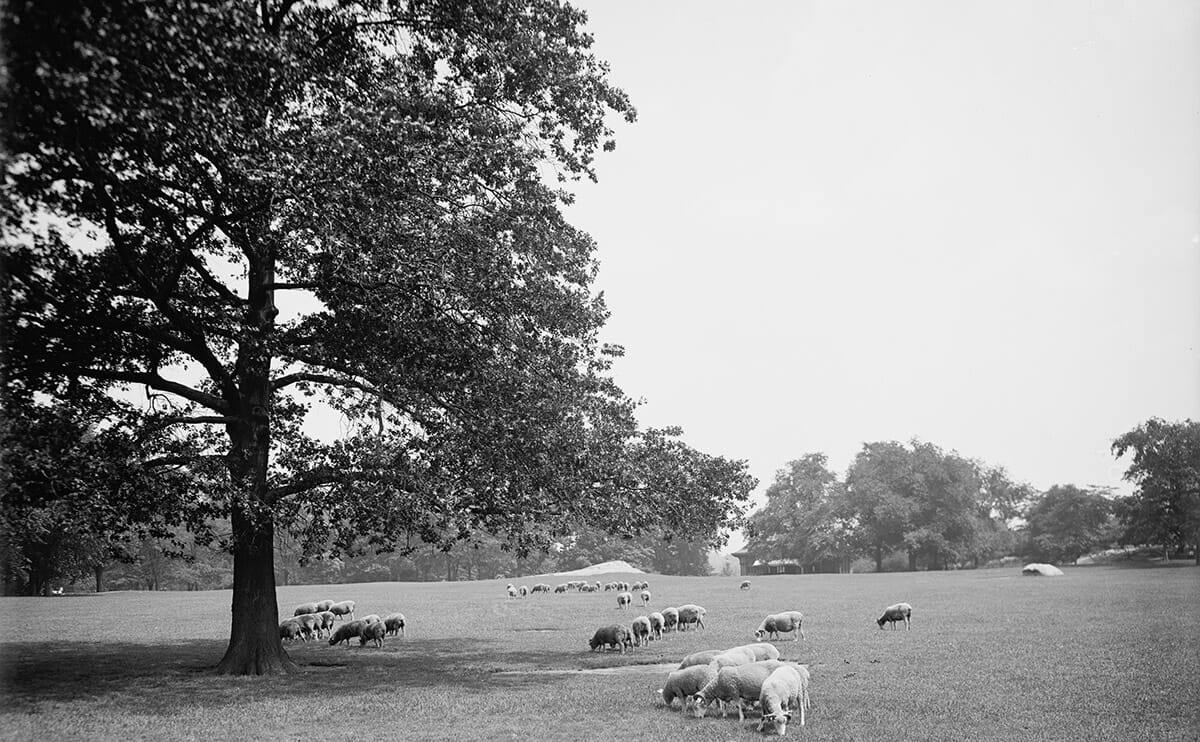 For just a few hours, as many as 30,000 can claim some space as their own, as they sunbathe and picnic, fly kites and toss balls. And that’s just during the summer. Crowds numbering as many as 400,000 have flocked to the grass for protests and “love-ins,” to watch the first man land on the moon and listen to concerts by the likes of Barbara Streisand and the New York Philharmonic. President Harry Truman delivered a speech there on Navy Day, and on 9/11, Black Hawk helicopters called it base camp.

And yet, Sheep Meadow was never supposed to be any of these things ”“ including what its very name suggests. 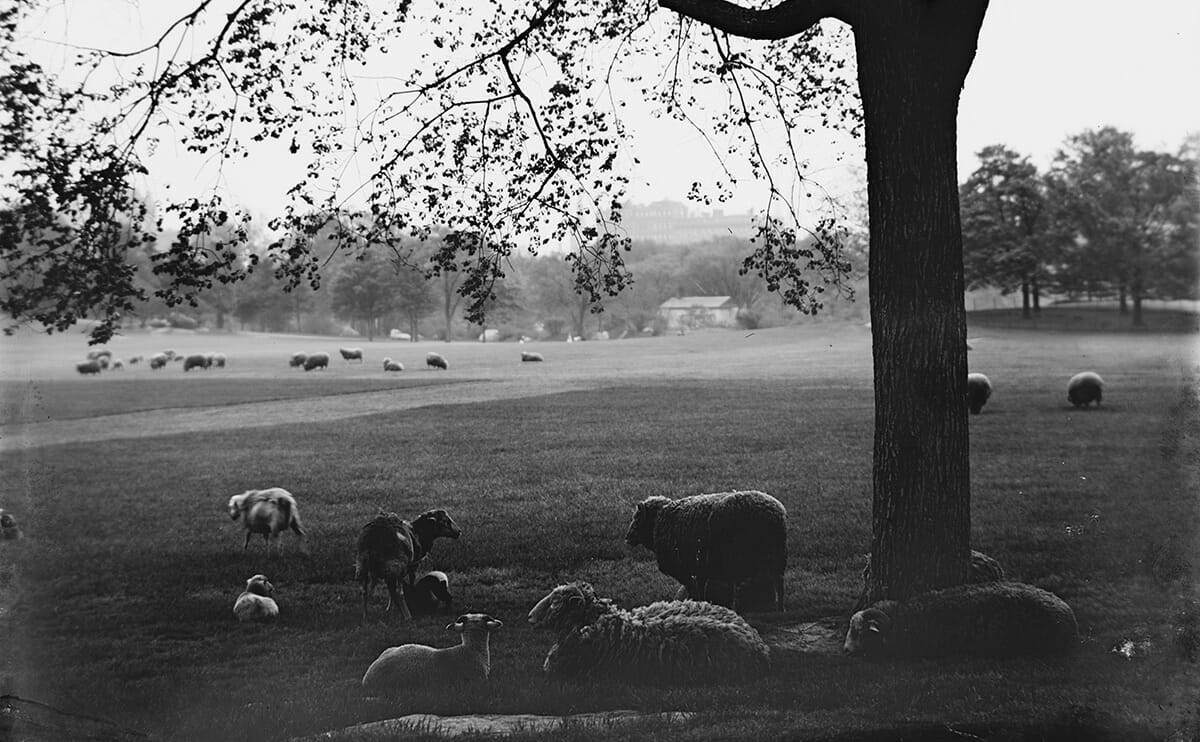 Sheep weren’t part of landscape architect Andrew Jackson Downing’s original vision for the land. Downing first proposed the development of the land that would become Central Park, but he did not get to carry out his plan. He died, along with 80 others, aboard a steamer that exploded on the Hudson River. After his death, Frederick Law Olmsted and Calvert Vaux won the competition to create an open lawn (known as “Greensward” in the 19th century), which was to be the site of militia drills.

But after they won the competition, Olmsted and Vaux did everything they could to repurpose the open lawn – and grazing sheep seemed like a winning alternative. They evoked Romantic images of a traditional English gardens, where polite society strolled quietly among the greenery, considerate and contemplative. With just a little convincing, “the Parade” became “the Green,” though it was decreed that it would still be, with few exceptions, off limits to the public.

Spotting a herd on the busy streets of Manhattan became an infrequent sight on the crowded streets, and when they did make an appearance, it wasn’t for sustenance; they were usually headed for the slaughterhouses on the Upper East Side.

Before the area could be populated by sheep, however, it had to be purged of impoverished New Yorkers. Small communities of African-Americans, as well as Irish and German immigrants, were promptly evicted, forced to abandon the makeshift homes they built on the rocky, swampy soil.

In 1864, 200 sheep were unleashed onto the newly grassed terrain, but it would be wrong to think Manhattan was teeming with livestock. Indeed, many parts of Manhattan were still agrarian during the first half of the nineteenth century, but by the time Central Park was established, the rural landscape had been altered by the industrial revolution, and most farms had all but moved out of the city. Landowners broke up their long-held acreage for urban uses, marking up maps with building lots to accommodate modern industry, and those who worked in it. Immigrants crowded tenement buildings, and tanneries replaced fertile riverfront crops. People weren’t bringing their own livestock to graze on public grounds.

The English-born Vaux oversaw the purchase of a flock of pedigree Southdown (now Dorset) sheep, who were housed in a “Sheepfold,” a fine Victorian building erected across the drive. The sheep slept in the barn, while the shepherd and his family lived on the second floor. The ends of the building were open to the public as pavilions, which children treated as an interactive exhibition. Twice a day, the shepherd would disrupt traffic (first carriage, then car) while herding the sheep over a crossing, towards the meadow. With the exception of those who were delayed, most considered the sheep a pleasant spectacle to behold. Onlookers were discouraged from entering their space, but they strolled along the meadow’s borders, a vestige of the past surrounded by an increasingly built-up cityscape. Manhattan paid for the sheep’s maintenance, but they weren’t free loaders. Their daily grazing ensured the grass was well-maintained and fertilized, and the wool they shed was collected and auctioned off. 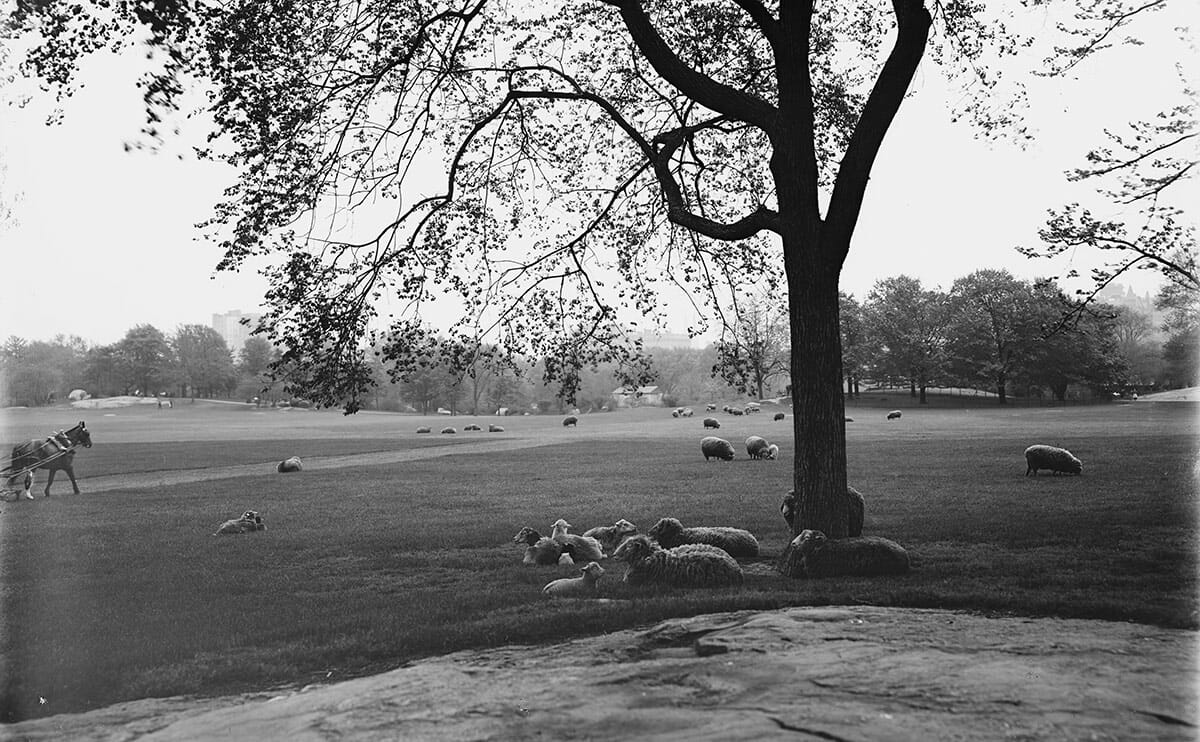 Sheep grazed on the meadow for nearly seventy years before parks commissioner Robert Moses, a polarizing “master builder,” decided their home should be a restaurant. In 1934, Sheepfold became Tavern on the Green, and the sheep were moved to Prospect Park, another Olmstad-designed park in Brooklyn. They may have stayed nearby, but in the throes of the Great Depression, officials feared desperate men and women, with hungry families at home, would be unable to resist seeing the sheep as a wasted food source.

They were moved again, but this time, their destination was about a 100 miles north of the city, into the Catskill Mountains.

And that’s when Sheep Meadow became a haven for people, but not without great detriment to those hard won, undulating hills. The lawn became badly eroded by frequent foot traffic, necessitating restoration. There are no more sheep to be found in the eponymous meadow, but the park isn’t wholly devoid of them. They can still be seen at the Central Park Zoo, where they live beside goats, alpacas and potbellied pigs, spending their days eating grain out of the hands of babes.