The Seeds of Legal Pot 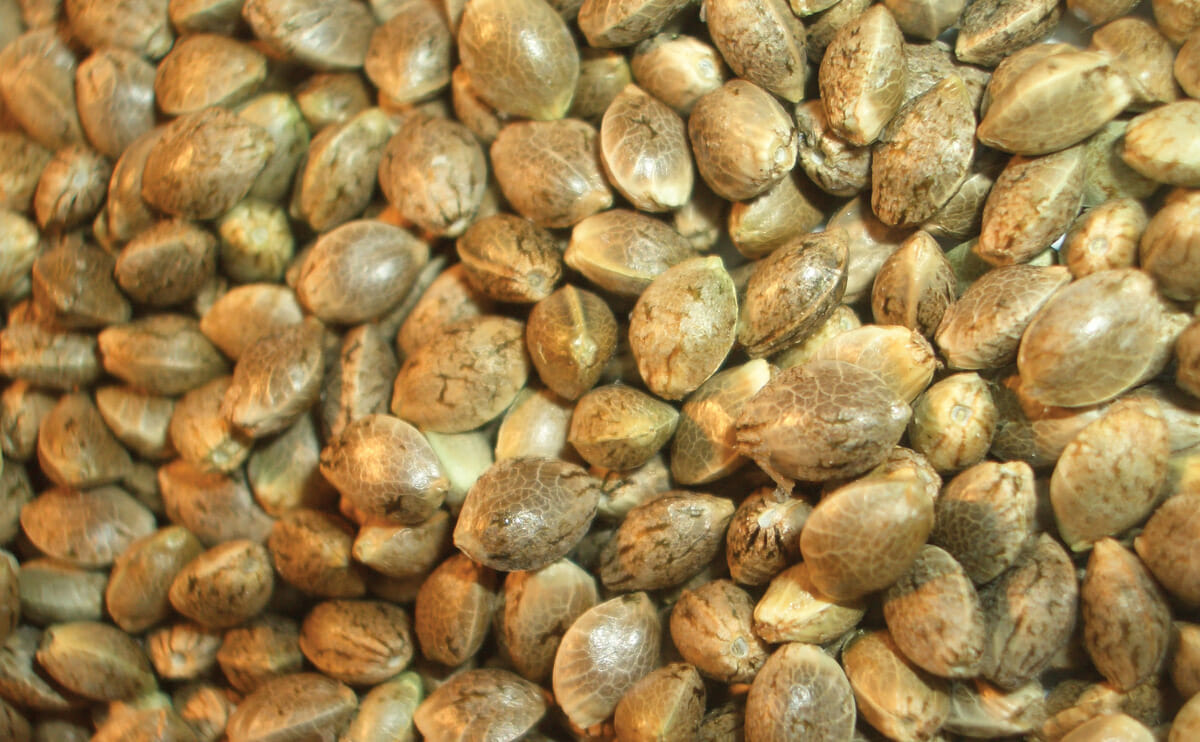 Growing waist-high from black plastic pots, the Nepali Mountain Sativa looks like any other marijuana plant: the sets of leaves reach for a set of carefully-timed lights, swaying from the push and pull of fans in the Lafayette, Colorado warehouse. But to Ben Holmes, the Nepali is a prize of his seed collection. The heirloom plant is a link to the past he hopes will help him breed the next great marijuana seed.

‘I want to be the first guy to register a strain of cannabis with the Department of Agriculture. If it’s managed under existing agricultural guidelines, we could study the plant and unlock all kinds of untapped potential.’

Holmes owns and operates Centennial Seed Company, a private seed bank dedicated to preserving and developing the finest marijuana strains for medicinal – and soon – recreational use. But marijuana is so ingrained in the public eye as a political symbol, a way to relax or a magical medicine that many have forgotten that weed — like corn, tomatoes or squash – is a crop. And all crops require a coordinated network of seed developers who shape the plants for a specific purpose and climate.

For decades, the marijuana seed network has connected through the back pages of publications like High Times or in underground corners of the Internet. But as Colorado marches towards full legalization, Holmes and others are asking their craft be treated like any other agricultural business. “I want to be the first guy to register a strain of cannabis with the Department of Agriculture under the Plant Variety Protection Act,” he said. “If it’s managed under existing agricultural guidelines, we could study the plant and unlock all kinds of untapped potential.” 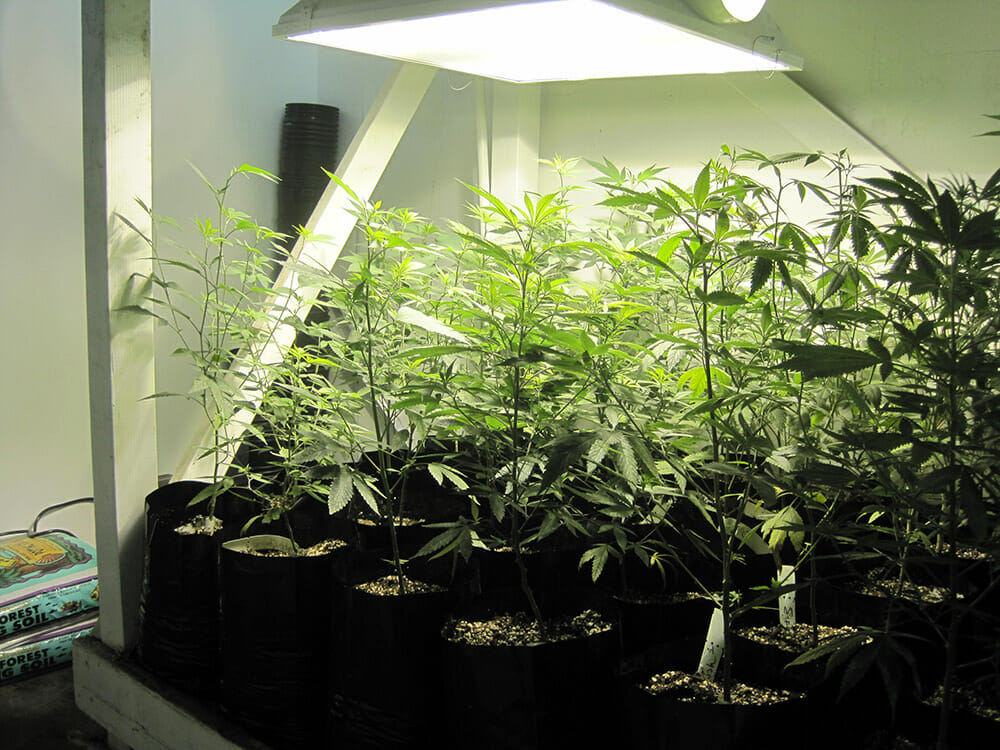 At the moment, Holmes is waiting for the seed market to open up again. When he started Centennial Seeds in 2009, the company sold seeds to 300 medical marijuana dispensaries. In 2011, the Medical Marijuana Enforcement Division (MMED) issued a rule stating dispensaries could only sell seeds that they produced themselves. The rule change was actually good news for the dispensaries because it allowed them to start developing their own seeds, but bad news for Holmes. He scaled back the operation, working on ancient strains of pot like the Nepali, developing his brand and experimenting with hemp, pot’s sober cousin that can be used for food, fiber and oil.

But when the clock strikes midnight in Denver on January 1st, 2014, Colorado pot shops will open to the public. If the rules hold, Holmes can apply for his own retail license to sell seeds directly to Coloradans nine months later from a registered marijuana storefront .

Who knows? The granddaughters of the Nepali could be the perfect complement to the marigolds and annuals in the backyard.

All plants need to start as seed at some point, but for now most growers clone their pot. Colorado’s medical marijuana industry relies on cuttings from “Mama Plants” to populate massive indoor greenhouses. The practice ensures that all plants are genetically identical and female (only girl ganja produces mind-altering resin), but leaves little room for innovation. Growers rely on cannabis seed developers to create new, ever-danker strains. 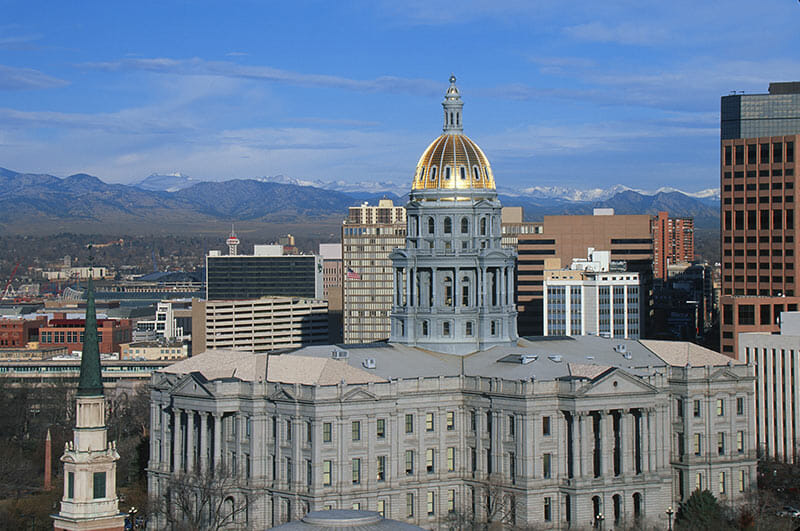 Hybrids are crossbreeds of two unrelated lines of cannabis plants – cannabis sativa and cannabis indica. Indica plants grow in bushy bunches. When smoked or ingested, indica produces sedative body buzz. Sativas, on the other hand, grow tall and slender and produce a cerebral high that either enhances creativity or makes finding your keys a serious issue. Breeders turn to hybrids to create strains for specific purposes. Some might grow close to the ground to hide from authorities; others might be bred to increase yield.

Thanks to international breeding efforts, the pot of today is much stronger than the pot of Woodstock..

In the early years of hybrid breeding, much of the game involved breeding strains with higher and higher concentrations of tetrahydrocannabinol (THC), the main psychoactive compound in pot. Many older Americans have learned of this development the hard way. Thanks to international breeding efforts, the pot of today is much stronger than the pot of Woodstock.

When the Drug Enforcement Agency (DEA) turned its attention to these breeding operations, many American seed developers moved their trade to Holland. By 1985, Dutch seed banks like Sensi Seeds – still one of the biggest players in the international seed market – collected, preserved, and interbred hundreds of cannabis strains, bombarding the world with tiny seeds packed into discreet envelopes.

David “Skunkman” Watson also made his way to Amsterdam and established a marijuana research and development business called Hortaphram B.V. There, researchers bred strains of pot that contained unbelievable percentages of single cannabinoids. One such strain contained 98 percent THC, still standing as the more potent weed ever created. Under the legal protection of Holland and later in Spain, England and Canada, pot breeders shifted the development of marijuana seeds from a black market hobby into a horticultural science.

‘We’re trying to breed our plants to be less potent. If you are a stage four cancer patient, the weed won’t get you stoned but helps with the side effects of chemo.’

Eric Forington, who runs 303 Seeds in Denver, looks to Watson and others as the “founding fathers” of professionally grown marijuana. A grasp of cannabinoids has especially focused Forington’s efforts as he pairs indicas and sativas.

“Now, we are trying to breed a lot of our plants to be less potent,” he said. “We are trying to make it so that if you are a stage four cancer patient, the weed you buy has high doses of CDB, a chemical that won’t get you stoned but helps with the side effects of chemo.” Chemical testing has allowed patients to match their symptoms with a carefully developed strain of pot. For breeders, the advances have provided number and figures to guide their craft. 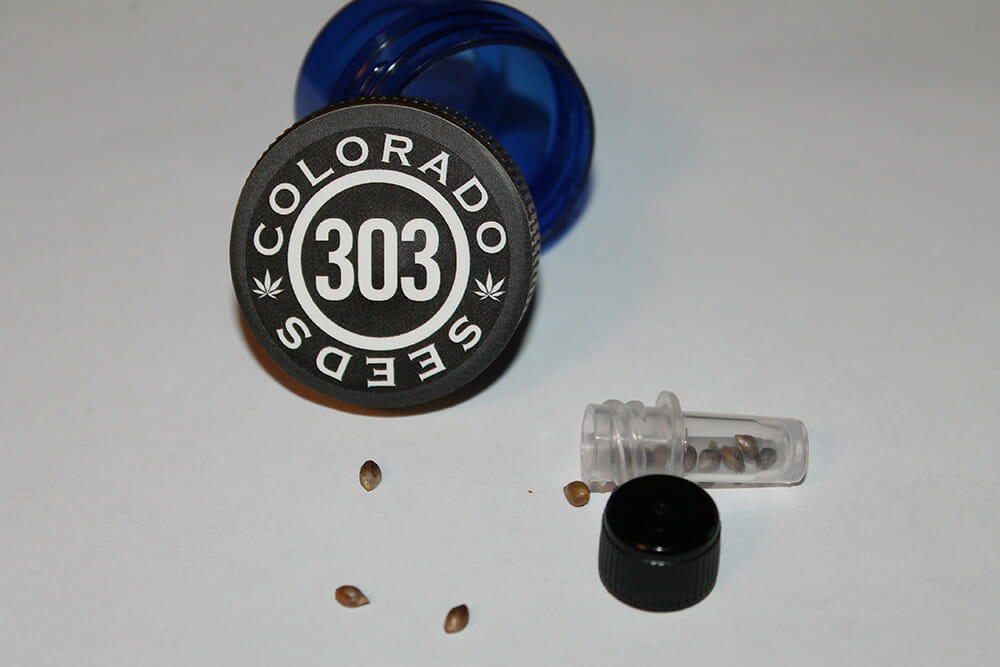 Journalists and pot advocates love looking for present day analogies for the legal pot industry. Will it be beer, wine, tobacco or coffee? (Rumors of a Marlboro Green cigarette appear false so far, but a few medical marijuana dispensaries have already claimed the name “Starbuds.”) Whatever the market looks like, chemical cannabinoid profiles will become the key to any pot label. “Patients are definitely savvy to [chemical profiles] now,” said Forington. He expects that in a few years, recreational users will decipher the alphabet soup of substances within the bud, and he will need to shape his creations to their chemical tastes.

After meeting the rising class of Colorado seed developers, I went online to see how the international seed banks were doing business in the U.S. At checkout page of one Dutch seed bank, I was given an option: When my seeds were mailed, would I like them hidden in a wallet or concealed inside a box of colored pencils?

I didn’t want to tempt customs, and besides, my purchase would have been impatient. New regulations will allow me to buy an ounce of seeds after January 1st, even if I am only legally allowed to grow up to six plants at time. The discrepancy could lead to Colorado becoming an American Amsterdam of pot genetics. 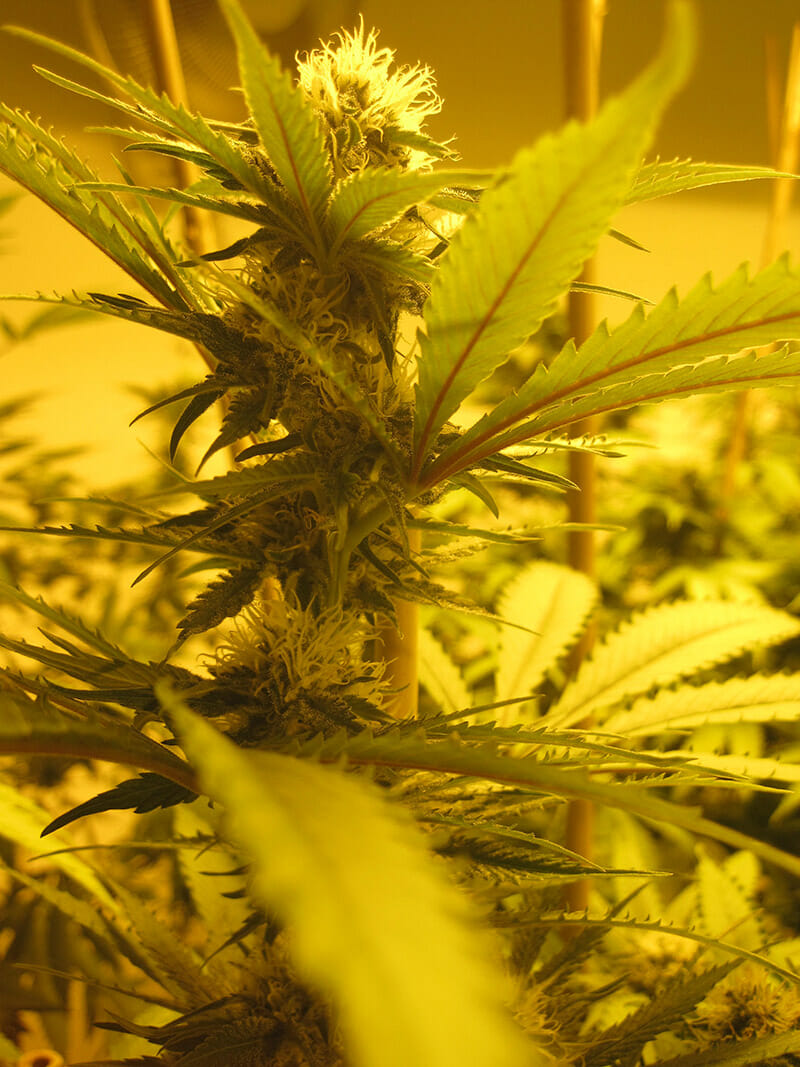 The absence of a public cannabis seed bank also leaves cannabis developers and growers in an awkward position with the law. Farmers rely on seed banks to ensure that the corn they planted this year will look and taste like the corn they planted last year. Currently, there isn’t similar sort of seed bank where cannabis developers can register their varieties. With no official way to verify a crop, growers just need to trust that their Dank Blueberry seeds are, in fact, Dank Blueberry as opposed to, say, Purple Haze.

“I would like to think that legislators understand that plants come from seeds,” said Forington. “I don’t know that that’s a fact.”

Since scaling back his operation to breed drug types of cannabis, Ben Holmes has focused on hemp. He has found that the Colorado Department of Agriculture (CDA), which regulates hemp under the new Industrial Hemp Act, has embraced seed development. Under new rules, breeders can research and develop hemp seeds. How those seeds get to Colorado is still something of a mystery since hemp is still illegal under federal law, but if and when the seeds to make it to the Centennial State, they will be treated with rules only slightly more restrictive than those governing beans and corn.

‘I would like to think that legislators understand that plants come from seeds. I don’t know that that’s a fact.’

Not so with recreational pot. Registered pot shops set to open in 2014 will need to grow all the marijuana they sell in indoor facilities monitored by surveillance cameras. Each plant will be hitched to a radio frequency tag so officials can easily count and register plants. The “seed to sale” system has been designed to keep marijuana out of the hands of children and keep taxes coming to the state, but does little to help breeders of cannabis create new strains and protect those creations. While smoking pot has become a legitimate recreational activity in Colorado, the law’s treatment of seeds shows how breeding and growing recreational marijuana isn’t yet seen as normal agriculture.

“[Seeds are] a developing area,” said Brian Vincente, a lawyer for Sensible Colorado who helped the state draft its new marijuana laws. “Marijuana has been largely illegal for 80 years and now we are trying to bring it into a regulated economy very quickly.” He expects the legislature to take on questions about seeds in the next year, but until then, breeders will just have to improvise.

Which is exactly what the they have been doing for years – scouring the globe for ancient plants, breeding them, tagging the results with a CIA-level code name and navigating complex laws and consequences to get the product to customers. Seed developers can’t register those creations, but with an expanded market, new levels of cash and credit are sure to come to the best breeders.

Forington shrugs. “I trust the agricultural community to give credit where credit is due.”

(Photo Credit: Seed photographs by Eric Forington of 303 Seeds, picture of Colorado State Capitol via Shutterstock, all other photos by Sam Brasch.)

Popular
7 Smokable Plants You Can Grow That Aren’t MarijuanaBrian Barth
Vegetables Aren’t Always VeganEmily Baron Cadloff
A Once-Forbidden Fruit Makes a ResurgenceShelby Vittek
OSHA fines Poultry Companies $1 Million after Deaths of Six WorkersDan Nosowitz
10 Summer Squash Varieties: Some You Know, Some You Don’tDan Nosowitz
Explore Modern Farmer
Related
Food & Drink, Plants
Show Us Your Share Part 2Modern Farmer
Animals
Move Over Goats. Cattle are the New Fire Fighters in TownLindsay Campbell
Plants
Bayer to Stop Residential Sales of Glyphosate-Based Roundup by 2023Alex Robinson
Food & Drink, Plants
Philippines Becomes First Country to Approve GMO ‘Golden Rice’Dan Nosowitz
wpDiscuz
We use cookies on our website to give you the most relevant experience by remembering your preferences and repeat visits. By clicking “Accept”, you consent to the use of ALL the cookies.
Cookie settings ACCEPT
Privacy & Cookies Policy