Blogging the Farm: The New Rural Writers and Their Urban Fans

As the temperatures plummeted to nearly 25 below zero, the sky scuffed black, Sylvia Burgos Toftness climbed into warm clothing, thick gloves, lined overalls and a hooded sweatshirt, grabbed a sledgehammer and stepped out into the Wisconsin night to check on her cattle. Unsure what she would find, she was tentative. “What would I find […] 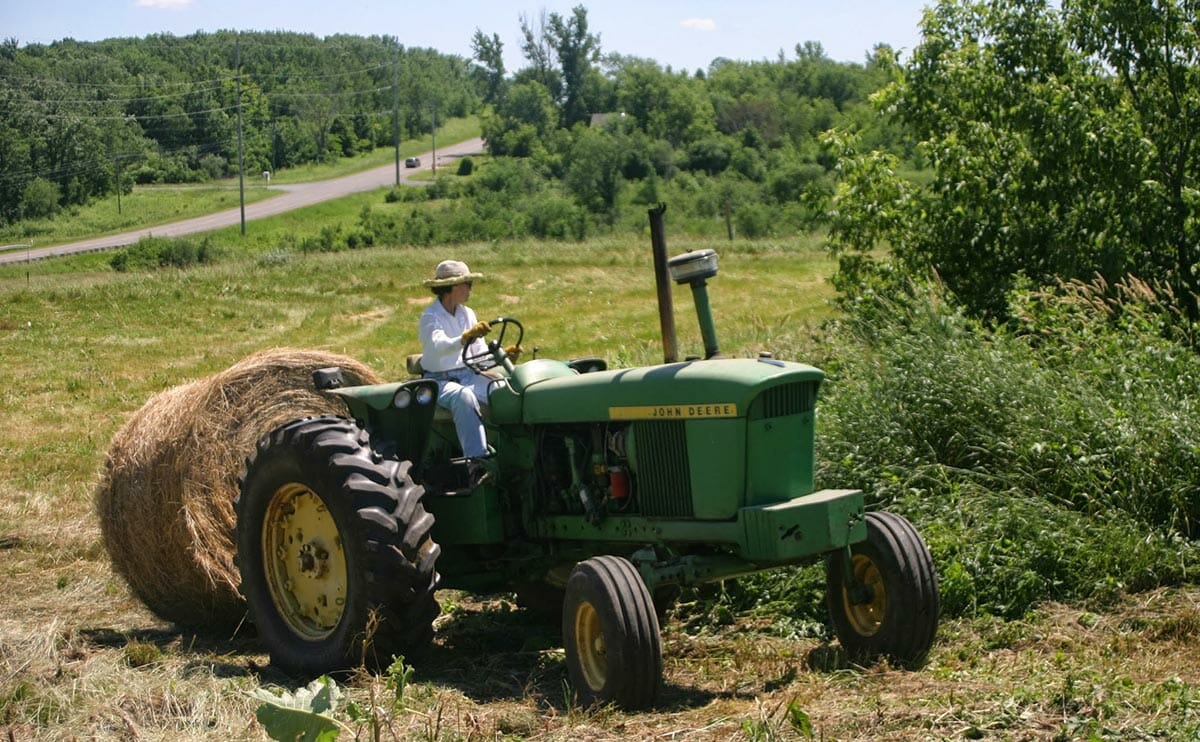 As the temperatures plummeted to nearly 25 below zero, the sky scuffed black, Sylvia Burgos Toftness climbed into warm clothing, thick gloves, lined overalls and a hooded sweatshirt, grabbed a sledgehammer and stepped out into the Wisconsin night to check on her cattle. Unsure what she would find, she was tentative.

“What would I find when I got the the farm gate? Calves stiff and lifeless? Cows swaying, weak from thirst at the edge of a frozen creek?” she recounted.

A full moon was suspended overhead as she went to the fence, where outlines of the herd were visible, their breath creating halos of fog. “I stood still. Steam was rising off the creek. The cows were as comfortable as can be. It was quiet and the moon was over them. That was peace. It was one of those beautiful moments when I just stopped and stood still, taking in the beauty, the quiet, and thought how fortunate I am to be farming,” Toftness says.

After returning to her warm home, Toftness sat and wrote it as an entry on her blog From the Bronx to the Barn, “Latina Baby Boomer Trades Subway for Grass Fed Beef.” Then she went to bed. And as she slept, throughout the late night and into morning, an audience she’s never met began to relive the experience through her words.

Toftness, who runs Bull Brook Keep with her husband in Clear Lake, Wisconsin, is one among the hundreds of farmers, men and women, who have taken to blogging and penning newsletters as a way to document their agrarian life. Farm blogging has grown so much in popularity, she even taught a seminar on how to do it for the Women, Food and Agriculture network.

One thing that has surprised Toftness and other bloggers? That many of their followers live in major cities. Urban readers are tracking farmers who both write and post photos on subjects as vast as the death of a herd member, virulent storms, parched soil or the trials and tribulations of marrying a farmer. Between 500 and 1,000 readers check in with Toftness monthly, many of them urban dwellers who leave comments expressing a yearn to trade lives.

Holmes says he initially began writing for other farmers so they could benefit from his highly diversified, holistic approach to farming. However, as his audience grew so did the number of readers not related to agriculture, he says. “Now it’s people who want to learn about their food or where their food comes from, as well as many chefs.”

Shannon Phifer who, with her husband, runs Ken Leigh Acres raising Jacob Sheep, blogs at Stories From the Farm posting photos along with a running diary of their life. She says about 60 percent of her followers come from urban areas. Among them, a woman from New York who once wrote Phifer that photos of the Jacobs are “her daily peace.”

Perhaps the most widely known farm blogger is Ree Drumond, who blogs about life on the range, cooking and her marriage to a hunky rancher on The Pioneer Woman. Drummond has published a book based on her blog, starred in a TV show and at one point Reese Witherspoon was in talks to turn her story into a movie.

Even if some farm bloggers are surprised to find that many of their readers may have never touched a cow, let alone worked the land, Phillip Round, professor of American Literature at the University of Iowa is not.

“People have a romantic idea of agriculture and there’s interest in the rural life their grandparents had,” Round says. “Maybe in this digital age, urban people are looking to the rural life and agriculture as more solid and grounded than their modernized life.”

Couple increasing use of technology with stressful lives, economic uncertainty with a separation from nature and throw in concern with over how food is grown, and you get a deep interest in farm life, says Round.

Not that today’s farm blogs are radical departures from the norm – every generation has seen its share of rural romanticism. Consider Virgil’s four-book poem, Georgics, published in 29 BC in which he extolls the virtues of beekeeping and hard work. And as cities grew and industrialized, the division between urban and rural widened, all but separating a historical relationship and stoking the urban reader’s hunger for a slice of the pastoral.

Farmers penning agrarian tomes is a centuries old tradition and can be traced back to when farmers passed solitary hours in the field making up songs, says Round. Scottish poet and farmer Robert Burns and New England’s Robert Frost penned work teaming with rural imagery and themes. In its early years, The Farmer’s Almanac contained poetry and stories written by farmers. From Laura Ingalls Wilder to Larry McMurtry, writers who chronicle the trials of country life have found wide and enduring audiences. Today’s readers gobble up work by novelist and activist farmer Wendell Berry. Kristin Kimball, a popular farm blogger who writes about her life in upstate New York, recently published her memoir “The Dirty Life.” The New York Times called it a “modern fairy tale.”

Toftness says that devoted readers sometimes go so far as to visit her farm.

“Aside from wanting to be able to say ‘I know my farmer’ there exists in society a yearning for something fundamental that can be touched, walked on,” she says. “Something to help them withstand the hysteria seen on the nightly news.”

Many find their way to farm blogs simply by cruising the Internet, looking for postings on everything from goats to recipes. Some farmers, like Julia and Todd McDonald of Peasants’ Plot, maintain a blog on the same website they use for their CSA, and their customers become their readers.

Rosann Pokoluc of New Jersey sought out Toftness’ blog to learn more about how food is grown. Pokoluc says she’s now hooked on reading about life on the farm.

“It’s like reading a story,” says Pokoluc. “Calves are born. On cold nights will they be able to graze if there’s ice on the grass?”

Such blogs also provide a slice of escapist fantasy. Many farm bloggers are urban transplants, who stoke readers’ dreams of leaving the city.

On her blog Thistledog’s Farm, Kay Gschwind writes about realizing her lifelong dream of farming and raising grass-fed cattle on her 20-acre Bear and Thistle Farm.

“Why do I blog? I’m trying to capture the progression and development of the farm — from building it to adding the animals. To write about the ups and downs and joys that portray the real life of farming,” Gschwind says. “And the readers get back to say they’re living vicariously through me.”

Beware the romanticism, however, says Verlyn Klinkenborg, an editor and literature professor who lives on a farm in upstate New York and has penned several popular tomes on rural living. He is currently touring the country for his new book, “More Scenes From The Rural Life.” Although he writes about ruralness because “no two days are the same, no two seasons are the same and it changes perceptions of nature with an unceasing variety,” he also knows there is another side to farming.

“I think that a lot of people who read my columns, urban people, have a fondness for farmers who seem to be living lives that look wonderful to people not living in the country,” Klinkenborg says. “There’s been an explosion of interest in farming with the new awareness of food. But it’s very hard for people who don’t know farming well to see it with any accuracy at all. What is seen is nostalgia, sentimentality and an easy set of assumptions of what farming life is like.”

Toftness says that many farm bloggers hope to educate their readers, rather than apply a shiny gloss to the farm life. Through telling stories of financial woes, tractor breakdowns and collapsing marriages, many farmers are working to bridge the gap between two worlds long separated by highways and interstates, processed foods and cultural disconnect.

“I may now wear beat-up clothes and have to head into the fields in the dead of winter, but as a former city dweller I’m trying to open a little window on what it means to be a farmer, to show the commonality and that we are all challenged,” Toftness says. “When I write about the death of my favorite cow Sassy I’m saying to them ‘this is what life is like now’ and I know I’m reaching them.”

Finally! I’ve been looking everywhere for a good list of home improvement blogs that won’t straight out advertise their services. Thank you for doing the effort of coalescing these. I agree with most of the sites listed. I’ve been through some of them in search of plumbing tips and advice that the average person can do and was happy to have found what I am looking for. 🙂 Simple joys in life like this ought to be celebrated!

Great information, thank you for sharing this wonderful content. Wishing you all the best!

Agriculture is the art and science of cultivating the soil, growing crops and raising livestock.

I am truly inspired by you folks growing up in the city and then moving out to farm life. I am living in city life now and can’t wait to move out to farm life. Keep writing these blogs and one day I hope to move.

The fact that you grew up in the city and moved out to the country inspires me in a profound way. City life is not for me and I am anxious to move to the country. This was very insightful. I am so excited for my own move!

Great article, thank you for sharing this amazing information with us. Keep up the good work.