Exterminating the Goats of Galapagos

Everyone knows of goats’ mythical appetites — that’s why they’re killer for clearing brush and invasive weeds. But set them loose on an island, mating and eating everything in sight, and goats can become a high-level nuisance. On the Galapagos Islands, the fabled archipelago where Darwin saw his finches, a drastic policy has been in […] 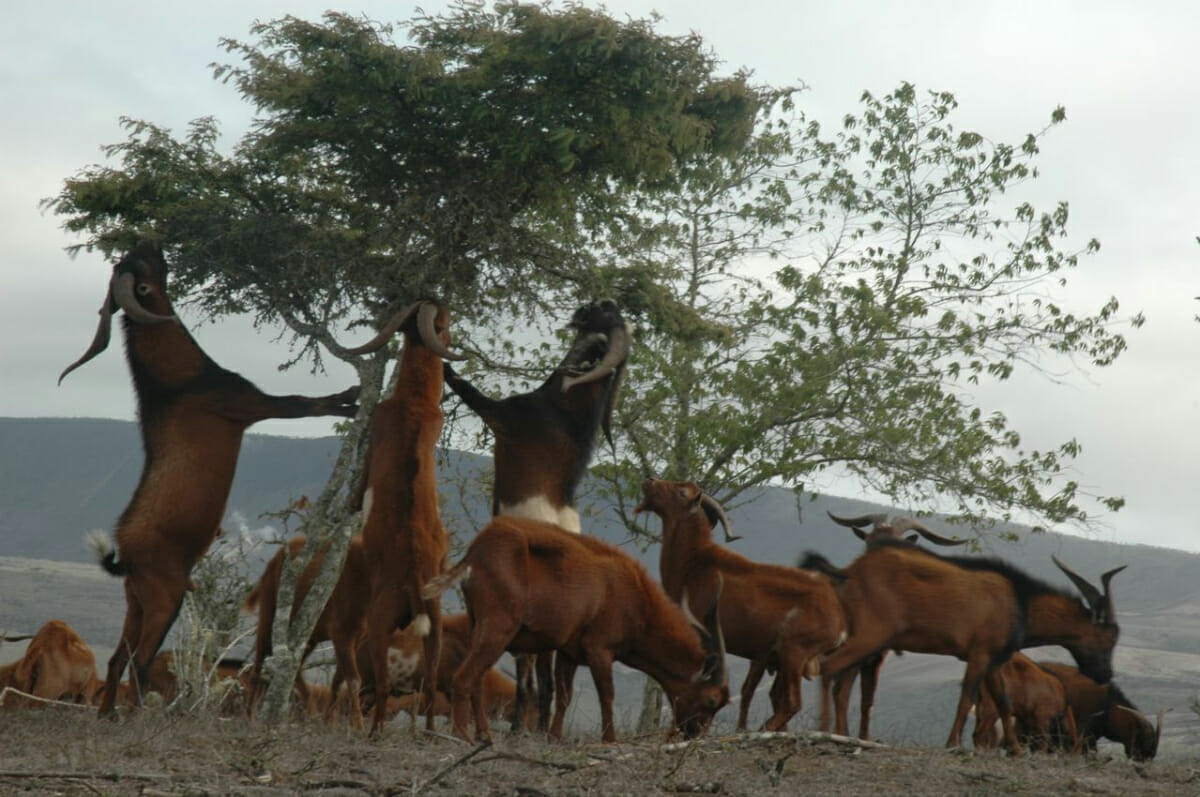 Everyone knows of goats’ mythical appetites — that’s why they’re killer for clearing brush and invasive weeds. But set them loose on an island, mating and eating everything in sight, and goats can become a high-level nuisance. On the Galapagos Islands, the fabled archipelago where Darwin saw his finches, a drastic policy has been in place for decades — kill every goat.

“It can be hard to see so many goats lying dead out there,” says Dr. Linda Cayot, science advisor for the Galapagos Conservancy. “But those goats were destroying the habitat of the tortoises. In my heart and mind are the tortoises.”

‘It can be hard to see so many goats lying dead out there.’

Goats were not native to Galapagos (bats and rice rats are the only native mammals.) They make awful island tenants, similar to rabbits, deer and wild pigs. Goats breed fast, have few known predators — none on Galapagos — and are indiscriminate eaters. On a chain of islands known for its delicate ecology, they threaten to ruin everything.

In 1959, fishermen released three goats on the island of Pinta. The men planned to hunt goat when need arose (little faith in their own fishing abilities, apparently). By the 1970s, three goats had turned into 40,000; vegetation on the 60-kilometer island was dismal.

By 1997, the Galapagos goat population had reached six figures. To fight back, a massive, multi-agency project called Project Isabela was launched. The operation bordered on paramilitary — platoons of goat-hunters scoured three islands, on foot and in helicopters. The method of killing? A clean shot to the head or the heart.

“The trickiest part of the whole thing was logistics,” says Dr. Karl Campbell, the field manager who ran Project Isabela’s operations. “We had to bring helicopters, rifles, and munitions to one of the remotest parts of the world. This was a time when the U.S. State Dept. was trying to restrict that stuff anywhere near Colombia.”

After being shot, the goat corpses were left to rot. Wasteful, but consider the reasoning — the goats had consumed valuable island nutrients. Exporting their meat would remove these nutrients from the island forever. “It could be very destructive, like removing 10,000 trees from a rainforest,” Campbell says. “Better to let the bodies decompose into the soil.” A handful of goats were consumed by the eradication team, but not many.

Platoons of goat-hunters scoured the islands, on foot and in helicopters. The method of killing? A clean shot to the head or the heart.

For Project Isabela to be a success, it required total eradication. “It took the same effort to get rid of the last 5 percent as it did for the first 95 percent,” says Cayot. To get rid of the stragglers, the team employed something called a “Judas goat.”

Judas goats were sterilized and injected with hormones to make them permanently in estrus (heat). These unwitting traitors were then set free around the islands, irresistible bait for the fugitives. By 2006, Project Isabela had eliminated all goats from the target areas.

Still, Galapagos’ goat problems persist on three islands today. The issue would seem to be marketing-related — some residents of these islands like to hunt goats for food. Cayot says it’s been tough persuading them to embrace total extermination.

Additionally, goats have become an odd political bargaining chip. When local fishermen are displeased with government fishing regulation, Campbell says they retaliate by releasing new goats on the islands. “It’s reintroduction as a malicious act,” says Campbell, “a way to spite the park service.”

The conservationists also have to manage their external PR delicately. Large-scale slaughter of a much-loved animal can seem grim to the world at large. “You have to understand,” says Campbell. “We don’t want to put a cute face to an invasive species.We focus on the outcomes, letting people see how good the islands look once the goats are gone.”

It’s pity to understand that people are the worst animals on the Earth.
But I hope all will be right. And people will be live in harmony with nature.

“You have to understand,” says Campbell. “We don’t want to put a cute face to an invasive species.’
yet this is precisely what the ‘science’ zealots who perpetrated this slaughter bestowed on the tortoises, a ‘cute face’. Talk about having it both ways