Meet some of the faces behind the new era of American cheese. 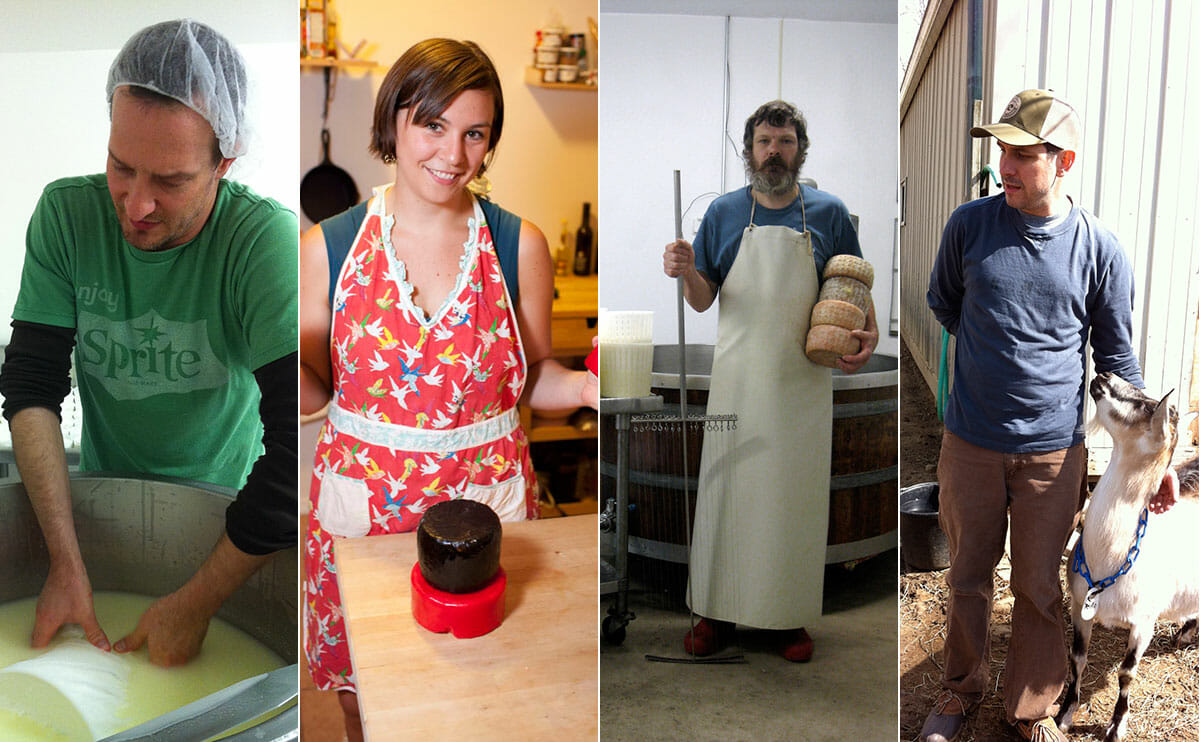 Farmstead and small-scale cheesemakers have sprung up across the country, with some having turned their passion into major businesses – think of the “goat ladies” of Cypress Grove cheeses or Vermont Butter & Cheese. Cheese counters are commonplace in towns both small and large, and the American consumer’s palette has expanded to include cheeses stinky, nutty and moldy. Terms like “washed-rind,” “alpine” and “mold-ripened” have crept into the common American lexicon. In 1987, the American Cheese Society Conference had 170 entries. Last year, there were over 1,700.

Along with this revolution have come men and women who started as home cheesemakers and are, through a multitude of paths, making their way into the cheese world as professionals. Working over large pots on home stoves, aging their wheels in modified wine refrigerators, fiddling with pH meters, hygrometers and salinometers, they started their careers by bringing a level of obsessiveness – and professionalism – to the home cheesemaking process normally reserved for the cheese plant.

These self-taught cheesemakers have taken their hands-on knowledge from cramped apartments to cheese counters, creameries and goat farms. None of them came from dairy families or ag-school backgrounds, and all started at the smallest scale possible, with a few foil envelopes of cultures and a couple gallons of milk. Along the way, they have developed a deepening relationship with the farmers and animals who make cheese possible. In some cases they do this directly – by working on a farmstead cheesemaking operation or with a farmer to source the milk – and in others they act as advocates, by working as the voice for farmers and cheesemakers at the cheese counter. 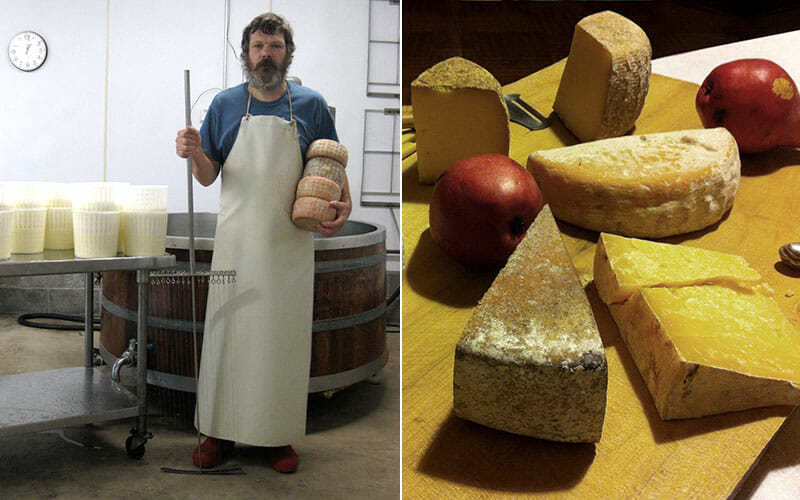 Where: Brooklyn, NY and Walton, NY

When I first started mingling with fellow NYC cheesemakers, one name repeatedly came up in conversation. “Have you heard of Jos?” they would ask, then recount the legend of a man making exceptional cheeses and aging them under the sidewalk somewhere in Brooklyn. When I finally met him, he did not disappoint; this talented cheesemaker, his story and a recipe were recently featured in Gianaclis Caldwell’s acclaimed book “Mastering Artisan Cheese.”

Vulto came from an arts background. While he was a partner in a Brooklyn metalworking shop, he began making cheese at home, before hitting on the idea of of turning the space beneath the shop and sidewalk into a “cave.” That was his aging facility for awhile, but he recently completed construction on a licensed cheesemaking facility in upstate Walton, NY, even importing a wood-sided, stainless steel vat from Holland. His first cheeses have started hitting the market this summer.

Vulto has partnered with a local farmer, Dan Finn at Highlands of Glenburnie Farm in Delhi, NY, to source his milk. The cows pasture in the warmer months but in the winter they eat silage, a fermented mixture usually made with grass crops, that is problematic in the production of milk intended for cheese. Vulto is working with Finn to get the cows off silage in the colder months so that cheese can be made for a greater portion of the year. Finn had originally considered getting into value-added production with his milk himself, but when Vulto approached him they formed a mutually beneficial relationship. Now Vulto Creamery is producing not just its own cheeses with Finn’s milk but producing some cheeses for Finn, under the Highlands of Glenburnie label, as well. 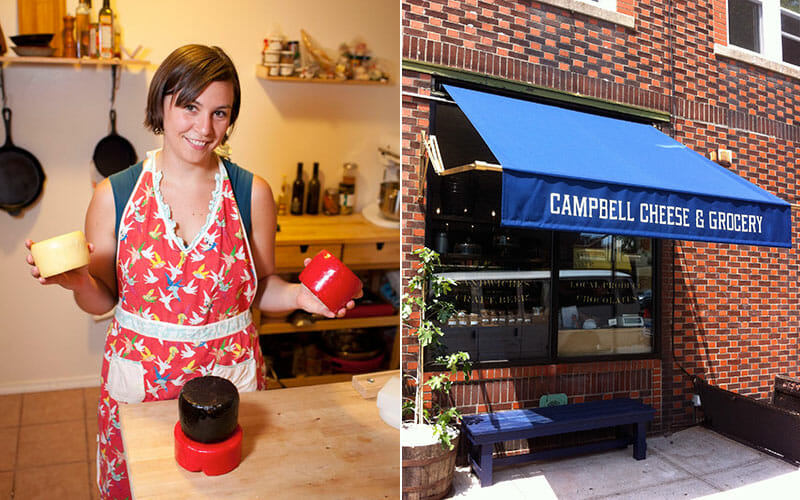 Santogade recently became head cheesemonger at the just-opened Campbell Cheese & Grocery in Williamsburg, but she started working in her kitchen, making goat- and cow’s milk cheeses and aging them in a converted mini refrigerator, running cheesemaking and tasting classes in her apartment and blogging about her experiences at Wannabemonger.com, all while working her day job at a nonprofit. A part-time stint as a monger at Brooklyn Larder – and a mention in Oprah’s O Magazine (the story was “8 People Who Made Their Dreams a Reality”) – eventually led her to leave the nonprofit world to take a position as head cheesemonger at Beecher’s Handmade Cheese.

Last summer Santogade was a member of the first group to pass the recently-minted American Cheese Society Certified Cheese Professional test (allowing her to add “CCP” to her title), and this spring she left Beecher’s to run the cheese program at Campbell’s.

Santogade prizes the relationship of the monger with the makers and farmers who supply her, and makes a point of taking trips to visit farms and cheesemakers at least three times a year.

“The cheesemonger is the bridge between the farmstead cheesemaker and the consumer,” Elena says. “They are representatives of the cheesemaker, and of all the hard work and dedication that goes into creating the final product. It’s hugely important to see where the products I represent are made, to meet the people making them, and to get a sense for how the animals are living.” 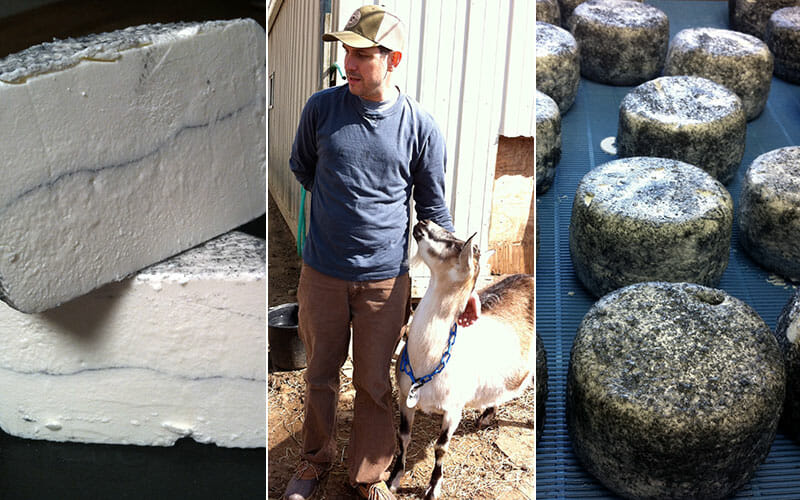 Bonanno has worn a variety of hats in the cheese world: farm assistant at Consider Bardwell, cheesemonger at Saxelby Cheesemongers and Cavaniola’s Tribeca, and cheesemaker at Rainbeau Ridge Farm in Bedford Hills (the farm of Lisa Schwartz, maker of the award-winning Meridian), as well as an active home cheesemaker.

After a couple years as a part-time assistant cheesemaker, he arranged to lease the cheesemaking facility at Rainbeau Ridge when Schwartz recently decided to take a sabbatical. He is now – under the name Arattom Dairy – producing the ash-coated Cinder (roughly based on the Meridian recipe) and fresh chevres, as well as developing a variety of tommes, fetas and more that will be coming to market soon.

Rainbeau is a true farmstead facility: while you stand in the make room, the bleats of the goats in the nearby enclosures are audible and each day the milk travels just a few hundred feet from milking parlor to vat. When Schwartz went on sabbatical, the herd was reduced from 40 to 14, although the biggest producers were kept, so milk production dropped by just 30 percent. Due to limited space, the goats are fed hay supplemented with grains rather than pastured, but live comfortable lives spent mostly lounging in shade; the quality of the milk attests to that. Jon’s interactions with the animals are limited due to his full cheesemaking schedule, but he hopes to expand his role and is interested in the possibilities of new partnerships between cheesemakers and farmers . 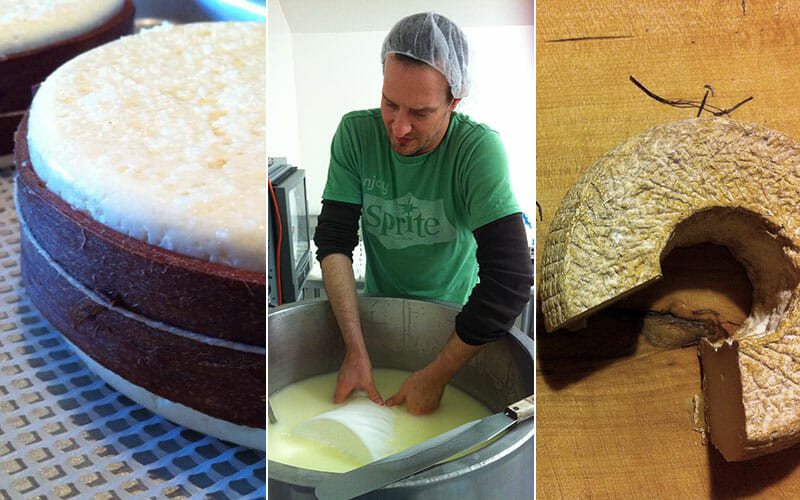 Perry is an artisan cheesemaker who got his start in his NYC apartment kitchen. He has a particular passion: capturing the flavors and microorganisms of his local environment. “If we purchase a culture that was scraped from a cave in Savoie, propagated and freeze-dried in a lab in Switzerland, and then added to the milk in New York, is it really a ‘local’ cheese?,” he asks. As Perry sees it, cultures, both added and naturally occurring, are “pigments on a painter’s palette, ready to paint a blank canvas,” and there is nothing wrong with using one or the other. Still, he prefers to seek out the local colors – even in as unexpected a setting as downtown Manhattan – in the pursuit of a cheese that truly honors the terroir from which it emerged. Perry experiments with ways to bring the natural biota of the region into his aging refrigerators, from harvesting bark from Upstate trees to wrap around his Vacherin-style cheeses to “seeding” the caves with wild-harvested plant matter to encourage natural bacteria, yeasts and fungi to establish themselves on the rind.

Perry doesn’t just make cheese, however; he has started a cheesemaking supply company, ArtisanGeek.com, and supplies cultures, ingredients and equipment to hobbyist and professional cheesemakers, retailers, and culinary institutes. Coming from a web design background – his Twitter profile describes him as “a recovering serial tech entrepreneur, designer and brand strategist” – Perry brings the same deep-knowledge approach to his new profession, and is in every sense truly an “artisan geek.” Perry works with farmstead cheesemakers in the U.S. and many other countries, assisting them in uncovering their distinct “cheese canvas.”

Matt Spiegler is an “urban cheesemaker” from Brooklyn by way of Philmont, NY, currently making a variety of aged cow and goat’s milk cheeses in Gowanus, while researching opportunities to expand his cheesemaking operations beyond the 3rd-floor-walkup-as-creamery model. He recently completed the Cheesemaker Certification program at the Vermont Institute of Artisan Cheese at the University of Vermont, and blogs daily about all things cheese-related at http://cheesenotes.tumblr.com. He was a guest on Anne Saxelby’s Cutting The Curd podcast in April 2012.