After considering the climate and the cost benefits of using local materials in the midst of a supply chain crisis, I opted for traditional construction methods when it came time to build my new barn. 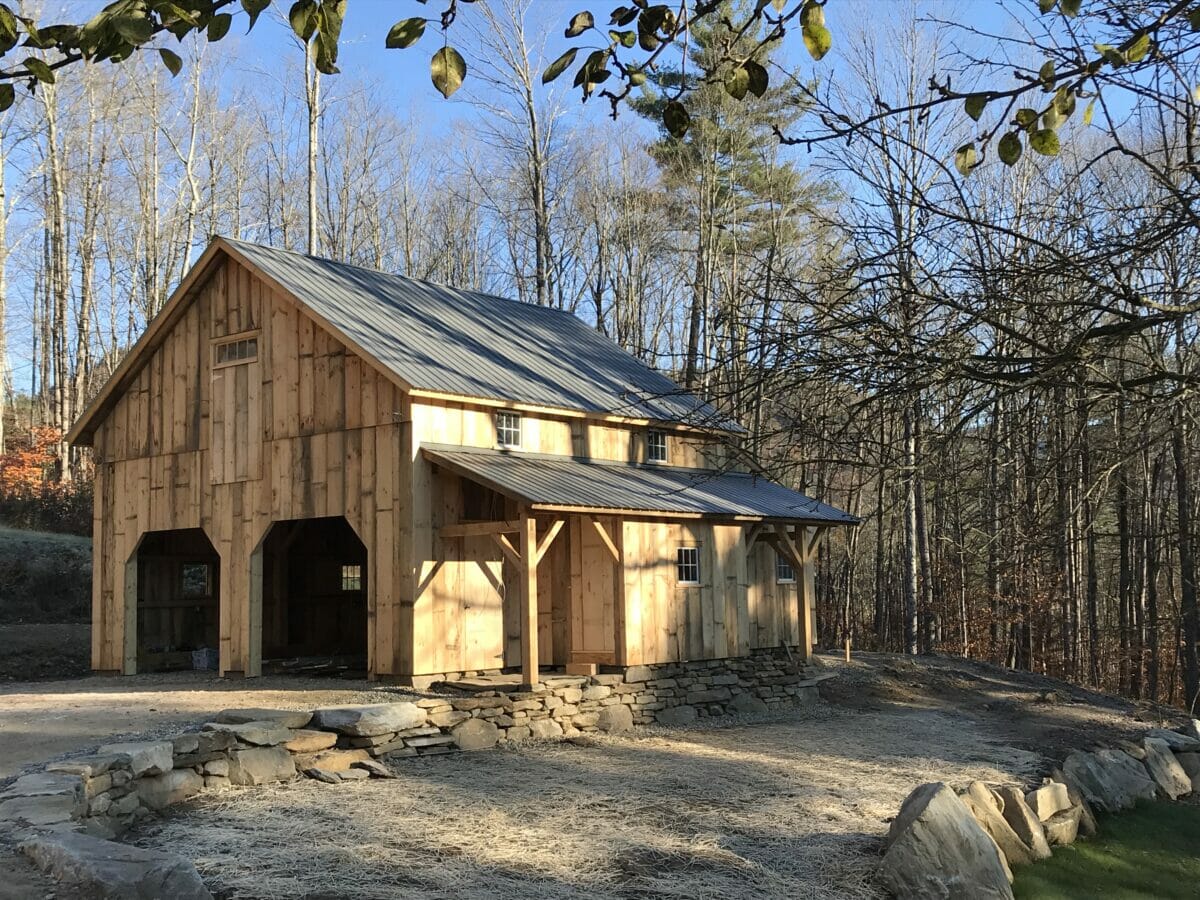 In the swirling chaos of the early pandemic, I did not always pay attention to my carbon footprint. But when I decided to build a barn on our Vermont property, I learned how my concrete and carbon footprints were connected. Taking a step back from that societal chaos into the solid, low-tech building methods of the 19th century turned out to be just what I—and the environment—needed.

My new barn will house two vehicles, two horses and an impenetrable chicken gulag. We’re building it using 1890s technology: an old-school timber frame structure on a dry-stone foundation. My decision to build this way started pragmatically, but I fell for traditional construction’s aesthetics, craftsmanship and climate friendliness. 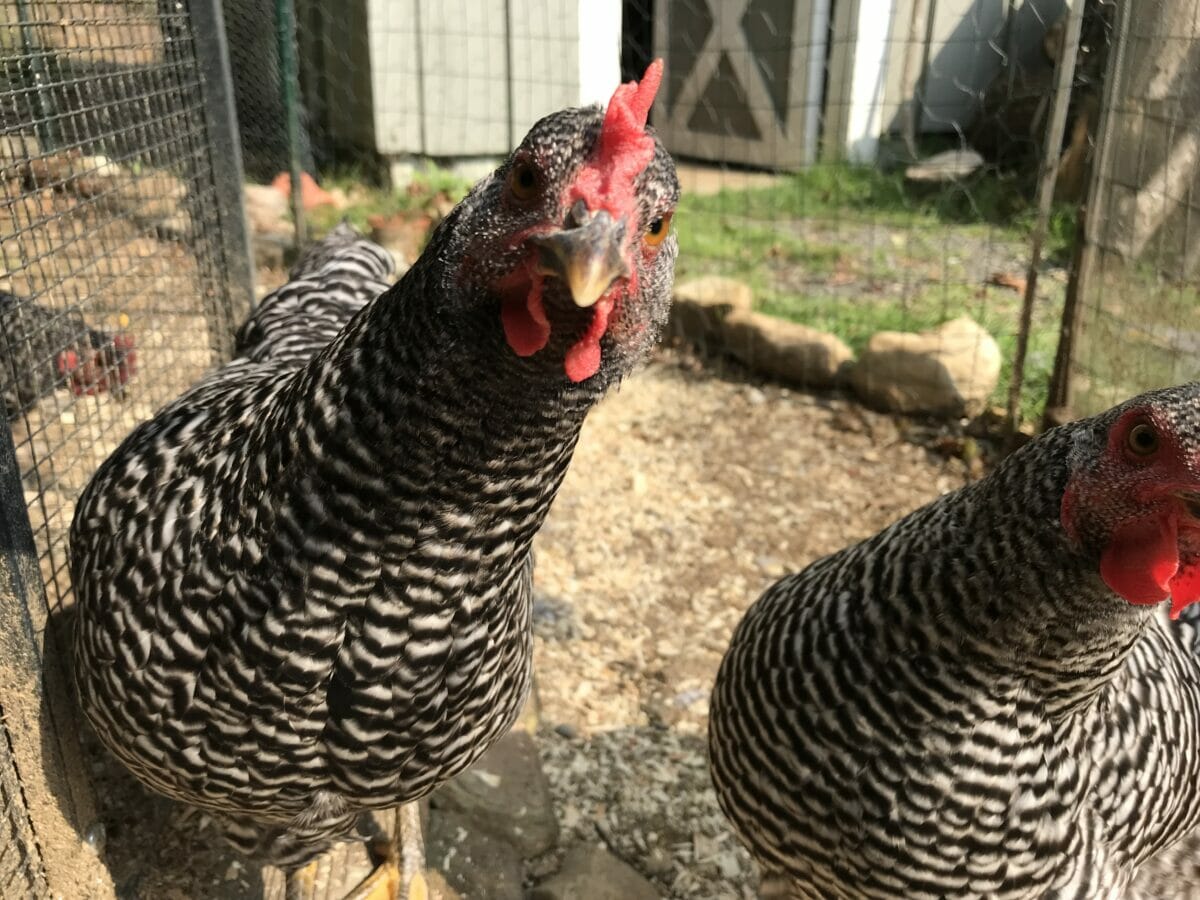 Our timing was terrible. During the pandemic, builders became scarce in Vermont—and construction materials even more so—as demand grew and the supply chain faltered. Worse, the costs of standard lumber and concrete were soaring.

We had been looking for a contractor for five years. After a record-snowfall winter without covered parking, it was time to get serious. “Would you consider timber frame?” I asked my spouse. I braced for sticker shock, given the craftsmanship that went into each beam. But to my pleasant surprise, the barn would cost less using traditional construction than conventional materials.

When we considered the foundation, our thinking shifted away from concrete. While admiring the picturesque 19th-century barns of New England and Pennsylvania, we noticed that many heirloom structures sat on dry-stone foundations. Many were still in great shape after 150 years. And if there’s one thing Vermont soil offers in abundance, it’s rock. 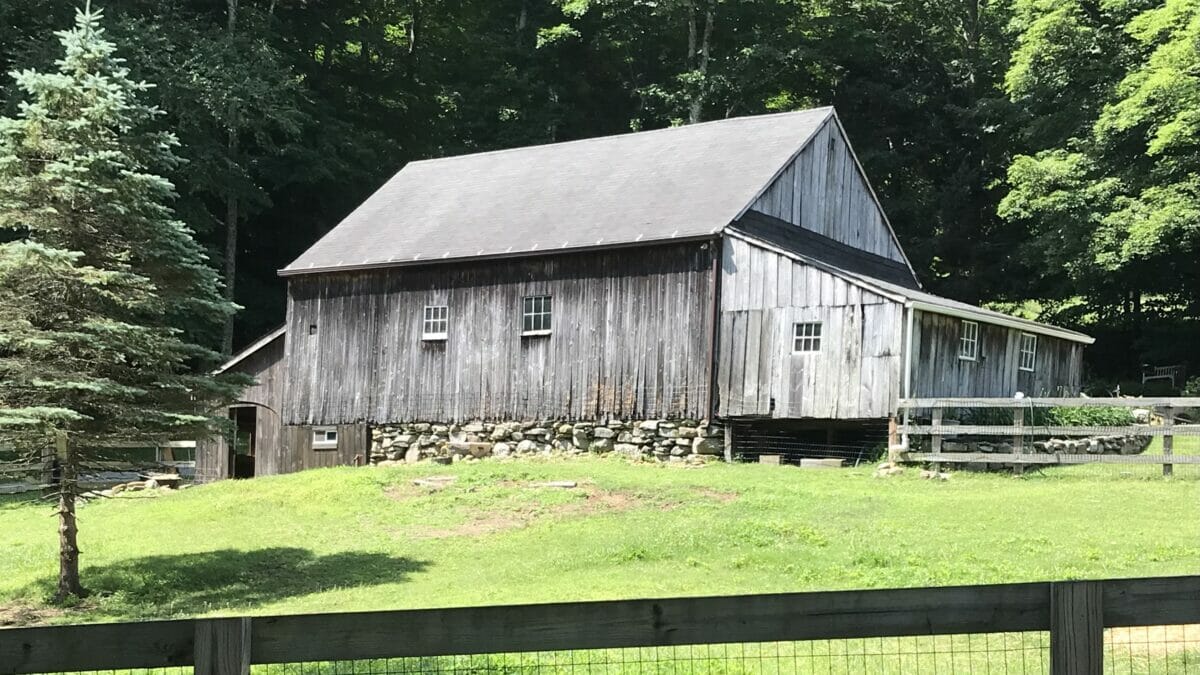 One of the inspirations: a barn in Mansfield, Connecticut.

It wasn’t just nostalgia that convinced me to go with dry stone. Avoiding concrete would have a greater impact on my carbon footprint than almost any other lifestyle choice I could make. If concrete were a nation, it would be the third-largest producer of carbon dioxide on Earth. Concrete’s greenhouse gas emissions rival those of the agricultural sector and far outstrip those of air travel. When calcium compounds break down to make cement, one of the byproducts is carbon dioxide. And the reaction to break those bonds requires intense heat—in kilns usually powered by fossil fuels.

But was one modest foundation so bad? We were planning a perimeter foundation, not a slab, after all. When I put pencil to paper, the results shocked me—producing a single cubic foot of concrete releases 14.81 pounds of carbon dioxide. Our 26-by-36-foot barn, with a four-foot frost wall, would use 331 cubic feet of concrete. That translates to 4,897 pounds of carbon dioxide. To put it in perspective, that’s as much as my car emits in 15 months of my current driving habits. Suddenly, a stone foundation looked like low-hanging fruit in climate change mitigation.

[RELATED: Will Hempcrete Ever Catch On?]

Dry-stone foundations offer an elegant solution to concrete’s emissions problem for outbuildings in rural areas. Dry stacked stone walls, bridges and foundations are durable and attractive, with no concrete involved. They stand up because they are built with physics in mind. And the invoice from our stonemason was about half what we would have paid for concrete. 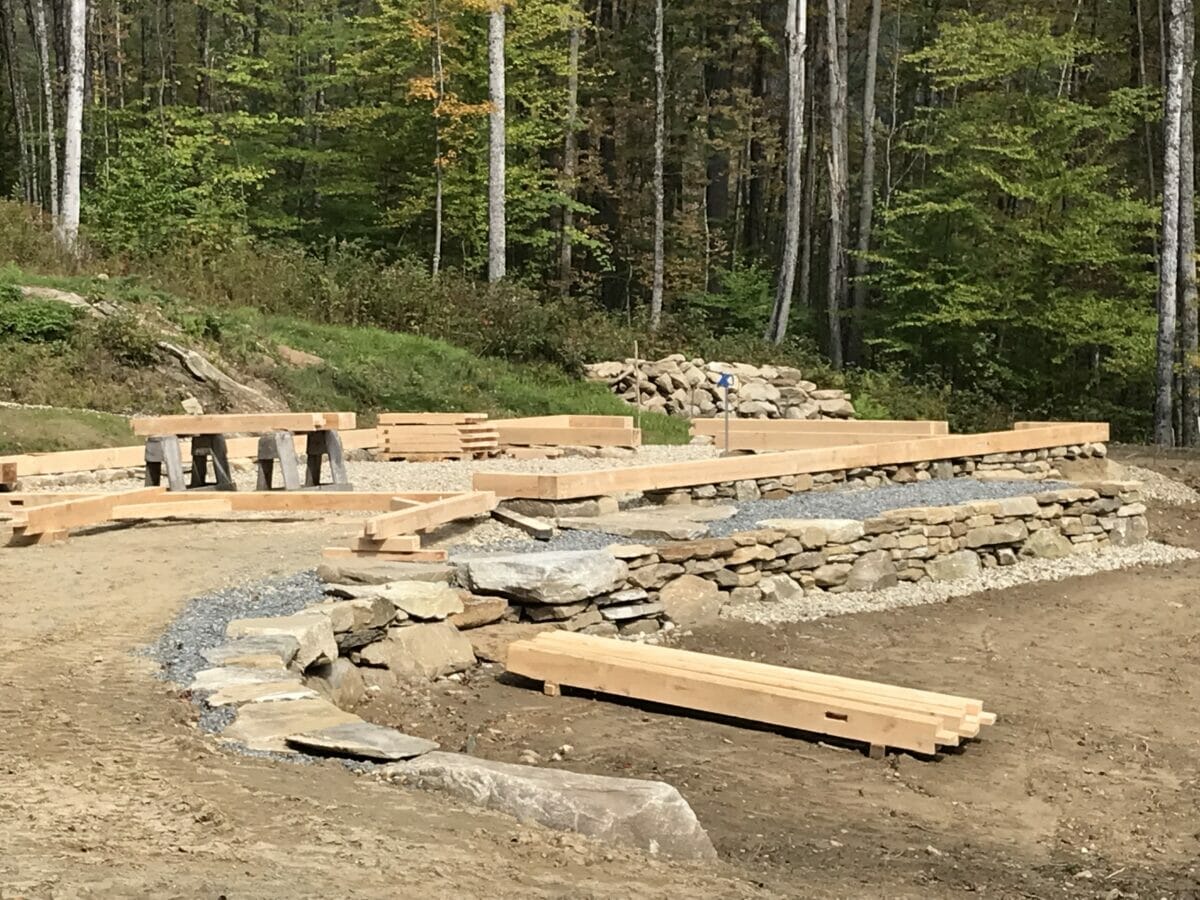 In Dummerston, Vermont, The Stone Trust is one of a few groups in the nation that trains and certifies people in dry-stone construction. The nonprofit promotes international structural standards for the construction and restoration of dry-stone walls. Dry-stone construction, an art and a science, should follow five principles: Keep stones level; set the length of the stone into the wall; build with the plane of the wall; “heart” the wall tightly (fill interior gaps with small stones); and “two over one and one over two,” to avoid running joints.

Jared Flynn, an instructor at The Stone Trust, says he was attracted to stonework by the permanence and long-term thinking it represents. Dry-stone structures have been around for hundreds or even thousands of years. “They were built for generations. We’re not doing that anymore,” Flynn says. There’s comfort in thinking beyond the current age. In fact, that’s exactly what we need to protect our climate. As the old proverb says, “The best time to plant a tree is 20 years ago. The second-best time is right now.” Green building choices today can help us plant a safer and more comfortable future for our children and grandchildren. 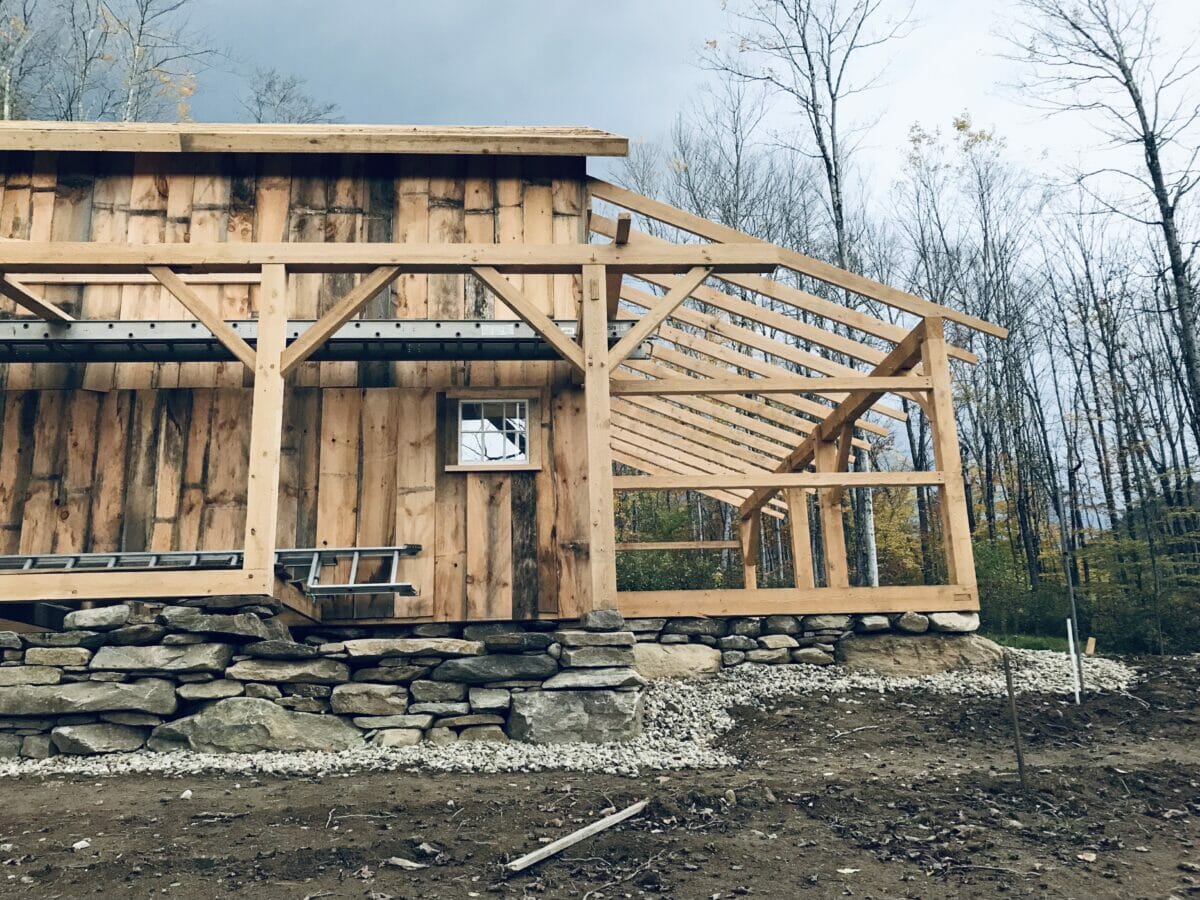 The barn from below, showing the stone foundation.

Dry-stone foundations are well suited for New England weather. “Stone is forever; concrete is not. Concrete absorbs water, and it has a life expectancy. Mortar will break down and go away,” says Flynn. Stone walls and foundations, in comparison, “are meant to flex and move in New England with many freezings and thawings in a season.”

Most centers such as The Stone Trust in Vermont and Drystone Joe training center in New Mexico are aligned with the Drystone Walling Association of Great Britain. Training hubs can help locate certified dry-stone builders, as their students come from all over the country.

Our builder, Pete Newton, uses regional timbers. The beams traveled about 50 miles from New Hampshire, where they were cut and milled. And the siding was produced on our property, using trees cut down when the barn site was cleared. In the next town over, Pete sized the timbers and cut the mortises and tenons (slots and tabs). Conventional lumber would have traveled over 3,000 miles from the West Coast. Since transportation adds pollution and expense, local timbers benefited my budget and the environment. Of course, “local” depends on where you live. For people in the Pacific Northwest, local conventional lumber might be the greener choice.

Once the framing started, work proceeded at an astonishing pace. The timber frame and roof beams were in place within about a week. Siding took another week, followed by the shed extensions for horses and chickens.

“It’s like watching an orchestra perform,” said my spouse. “They each know their part, and Pete makes sure they do it together.” We watched, mesmerized, as the façade for the chicken porch swung into place. The carpenters used ropes to guide the tenons into the waiting mortices. The whole frame is held together by wooden pegs—nails for siding only. 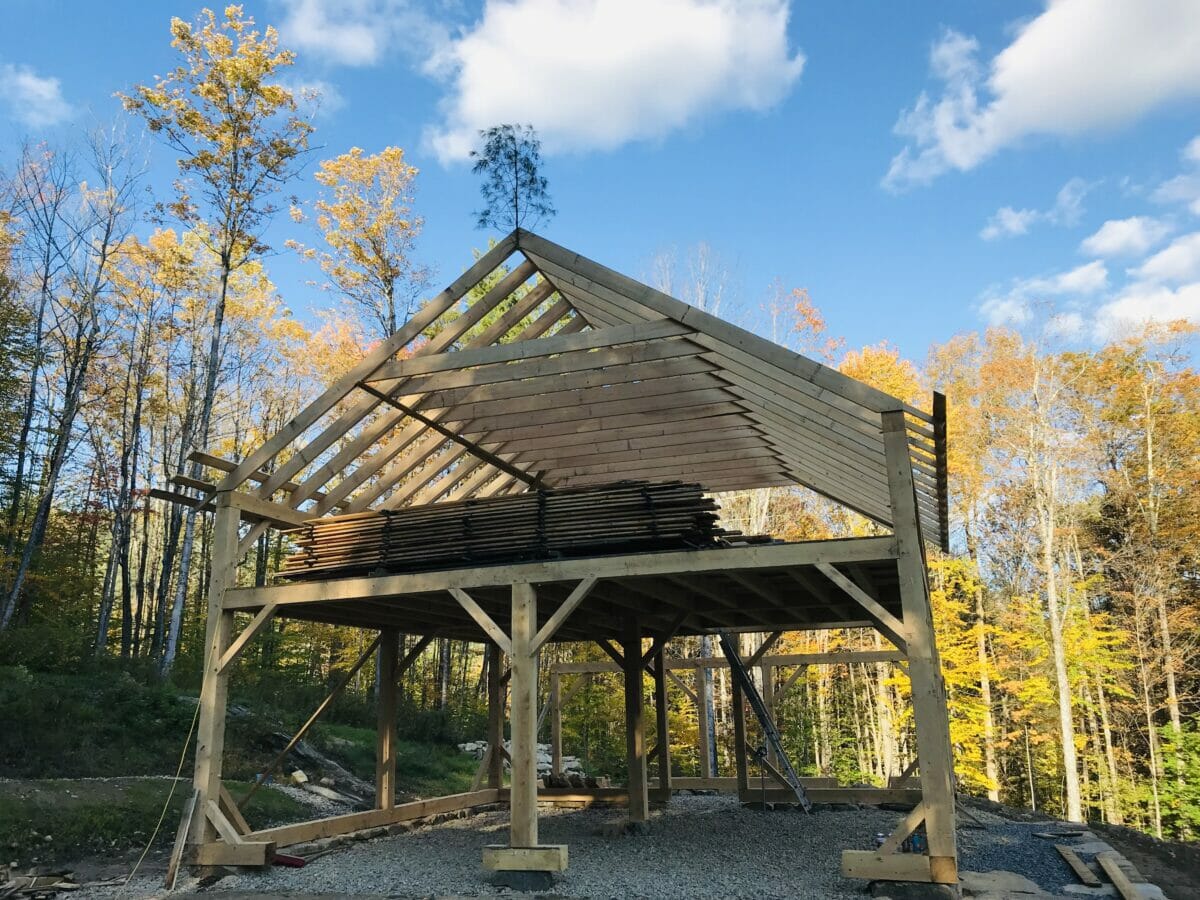 The barn topped out.

When the roof beams went up, my spouse and I cut a small evergreen from the edge of our field. The crew nailed it to the highest point on the barn, completing the topping-out ceremony. Topping out goes back thousands of years to Scandinavia and pays homage to the trees that gave their lives for the building. While the reasons for the ceremony are more traditional than animistic today, it is still widely practiced.

The barn is full of respectful nods to the past. A few years ago, we reclaimed the lumber from a 19th-century hay barn that once stood at the bottom of our meadow. My father kept horses there as a child, and my sisters and I played in it and marveled at the old farm equipment. In the haybarn’s salvage pile, we found a massive hemlock flooring plank. We calculated that its tree of origin was alive 400 years ago. The plank was over three inches thick and still sound. Pete sectioned it into several steps, creating a graceful curve at the bottom of our hayloft staircase. Now there was a piece of my beloved old barn in the new one. 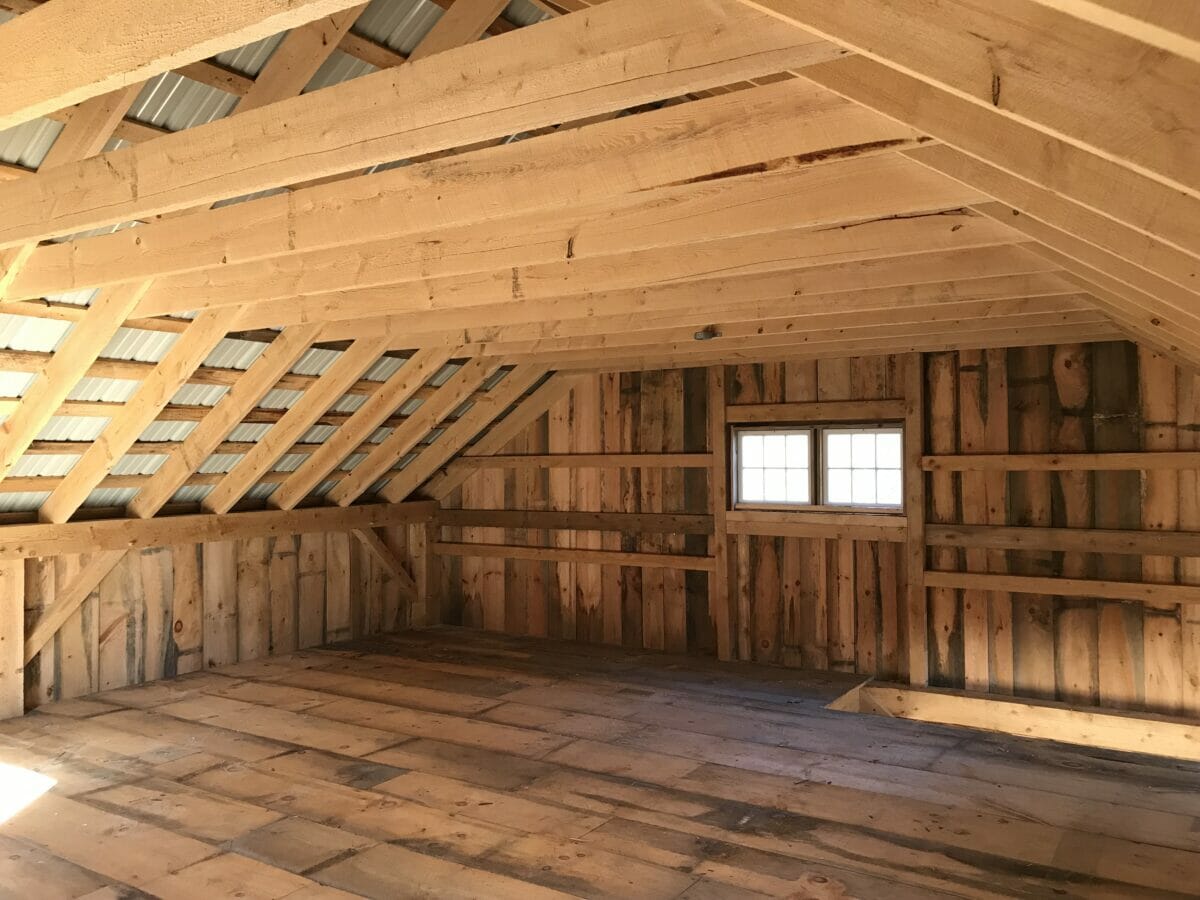 We found antique iron latches and hinges in the lumber pile—hidden treasure. Pete threw the parts into the fire to remove the rust, then rubbed them down with a beeswax candle. The wax filled the metal’s pores, forming a protective patina against the elements. My mother approved of this adaptive reuse. Her favorite saying is, “Use it up, wear it out; make it do or do without.” Although that rhyme originated in a Depression-era public service campaign, it’s as relevant today as “reduce, reuse, recycle.”

I expected the hayloft to seem cramped with the roof and siding on, but it feels cavernous with its high ceiling and robust frame. It’s too cold to paint the barn this year, but we’ll paint the exterior in the spring. Once the paint goes on, we’ll be ready for our barn warming. That hayloft just calls out for a dance.

Love this! Is there somewhere we can view the plans/blueprints of the design?

Great little read! Much information packed in for those of us with short attention span. Wish there was a video of the work, your contractors did a fine job.

Looks great ! But with a metal roof, how are you addressing condensation ? vapor barrier under the floor ?

Neat! Hope to see more of these.

Love how green you were w this. I have a barn from 1820. They used local clay, sand, and hay to make a cob to fill the holes abs then as a plaster over all the stone. It’s still here today. My husband and I have been repairing what is gone as we found rodents using the voids as a highway.

Super cool. I actually got in touch with Brian at the Stone Trust this past summer to explore doing a stone foundation for a small building and he informed me it would cost three to six times what a concrete foundation would cost. Do you have more details to share? Thanks

Couple things. Did you include the carbon footprint of removing the trees from the site? Secondly, why paint? Let it naturally age.