The Visionaries Running a Worm Farm In Prison

Sustainability programs in prisons can benefit the environment, society and incarcerated people alike. 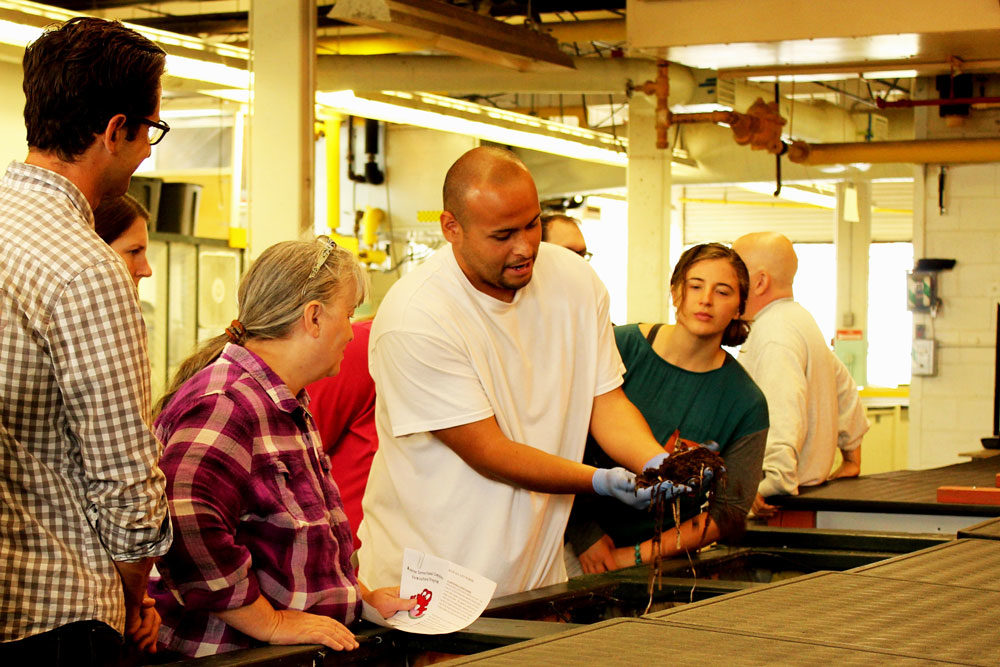 Every morning when we go to work at the Sustainable Practices Lab at Washington Corrections Center in Shelton, Washington, we come around the corner of the greenhouse and are greeted like heroes by a flock of eager chickens.

Little Red, the smallest and youngest of the ladies, knows she holds my heart. She’ll have her fill of treats and then hang around my feet until she receives the massage she’s come to expect. I’ll rub the sides of her little wings and move to her back and neck. Then she’ll fluff her feathers, give a little look back and run off to hang with the flock. Although I don’t think she knows it, after almost 20 years of incarceration, these moments are a big part of what helps remind me that my world is more than just concrete walls and barbed-wire fences. She makes this place a whole lot better—all the chickens do, as they allow us to be human and love something beyond ourselves.

Our chicken program, which we fund by raising the chickens, gathering their eggs and selling them to the guards and prison staff, is just one of many developed by the Sustainability in Prisons we Project (SPP), which aims to reduce the environmental impact of prisons and provide relevant job skills in sustainable practices to prisoners. SPP programs range from conservation projects that restore native plants to endangered frogs, therapy dogs, beekeeping and the aforementioned chickens. While we love our chickens, the program for which Washington Corrections Center is most known is its bugs—worms and flies, to be exact.

After building a highly acclaimed food waste management system at the now-closed Washington State Reformatory—one of five facilities that made up the state’s Monroe Correctional Complex—Nick Hacheney, better known by his fellow prisoners as the “Worm Dude,” was invited to relocate to Washington Corrections Center to start a similar program about a year ago. He was quickly joined by Juan Hernandez, the lead technician at the reformatory’s worm farm, as well as myself. We are now busy working with prison staff to build an infrastructure to match the success they had at the other facility. 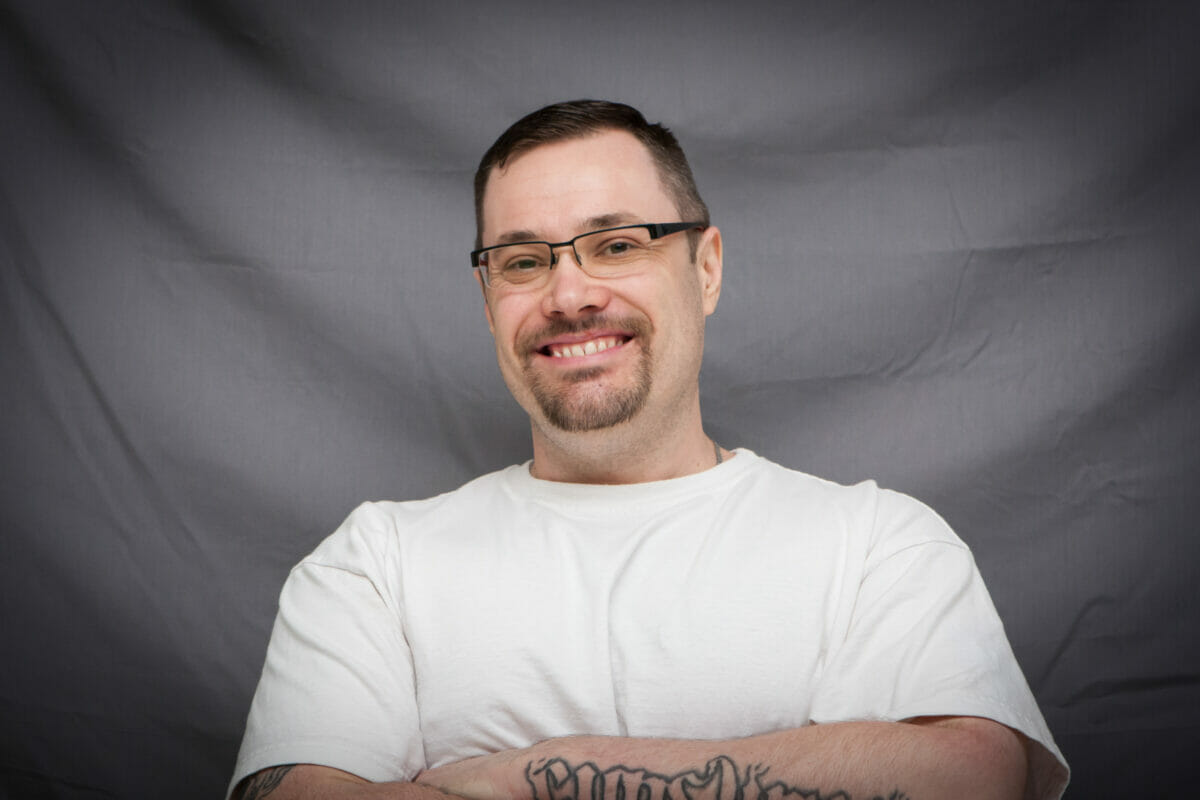 The idea behind our new waste management program is simple. Prisons have a huge environmental and social impact; they’re bad for the people who live there, the people who work there and for the planet. Research shows that prisons may be ineffective at rehabilitating the prisoners held within their walls and that, upon release, many formerly incarcerated people struggle to reintegrate into society.

The science behind the program is simple as well. The EPA estimates that more than 76 billion pounds of food waste goes to landfills every year, and untreated food waste produces methane, a major contributor to global warming. At the Monroe Correctional Complex worm farm, which Nick helped build, prisoners built an infrastructure that accepts 100 percent of the food waste from the kitchen, processes it and then feeds it to one of three systems.

The first system involves worms. These hipster vegans of the operation convert fruit and vegetable waste into worm castings, a high-end fertilizer often referred to as “black gold.” The second system is known as the Bokashi composting method, an anaerobic process that breaks down food waste using lactic acid-producing bacteria. Prisoners treat the food waste with bran inoculated with the bacteria and let it pickle in 55-gallon barrels for a month or more before burying it in the ground to further decompose or feed it to other systems. The third system involves black soldier flies, the omnivores of the operation. They eat everything and at a ferocious rate, converting as much as 80 percent of the food waste into biomass. The grubs can then be fed to chickens or fish.

[RELATED: How to Build a Worm Farm]

Knowing that people who complete vocational and collegiate programs in prison are far less likely to recidivate and are more able to break the cycles of poverty that often lead to incarceration, Nick developed the curriculum for a 1,000-hour vermicomposting certification at his previous prison facility in 2016. He did this in collaboration with Evergreen College and Tilth Alliance, a nonprofit organic gardening organization. The program allowed participants to earn college credit, work with outside sustainability experts, participate in workshops and gain marketable skills in multiple sustainable practices. Since the closure of WSRU at the Monroe Correctional Complex in 2020, the program has been paused, but Nick hopes to get it up and running at the Washington Corrections Center as soon as it’s safe to do so. 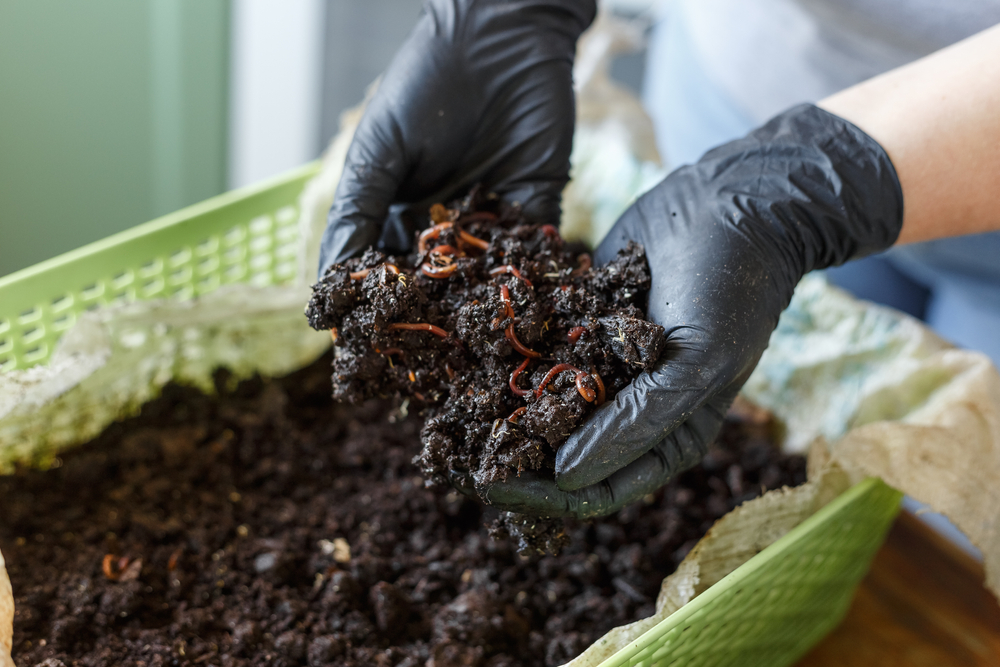 For Nick and Juan, the rehabilitative aspect of the work is the most rewarding part, and they hope to revolutionize the way people reintegrate back into society after leaving prison. Over the past nine years, they’ve trained dozens of technicians in sustainable practices and have helped many get their 1,000-hour vocational certificates. Many participants have said that working on the worm farm was the first place they got to experience peace in prison. There’s something very powerful and restorative about caring for another living creature, even if it’s just a worm.

“Some of these guys had never even put their hands in the dirt before and would be amazed to learn that the soil is alive,” says Nick.

It may come as a surprise to learn that many prisoners care deeply about the environment and very much want to be a part of solutions to the problems facing the world today. Often, prisoners struggle to find a way to pay their debt back to the communities they’ve harmed in coming to prison. SPP’s programs and working with nature serve as a therapeutic output, offering many of us the ability to undo some of the harm that prison inflicts on the incarcerated.

Over the past six years, Nick and Juan have studied everything they could about life after prison, trying to parse out what distinguishes those who successfully reintegrate into society from those who recidivate. They spoke with people who had gotten out and then returned to prison, trying to understand what went wrong and what their largest obstacles were. They studied issues such as Post-Incarceration Syndrome, which is similar to PTSD and is experienced by many people who have been incarcerated.

Nick and Juan next looked beyond their prison walls to programs on the outside, such as business incubators that help nurture ideas and growth. Then, inspired by Shinrin-Yoku, the traditional Japanese practice of immersing oneself in nature, Nick and Juan took the first steps to formalize their organization in 2020. The Environmental Advancement Reintegration Network (EARN), as they called it, is a nonprofit business incubator and accelerator for prisoners who want to start a business or nonprofit in the environmental or sustainability field.

While incarcerated, many prisoners develop tremendous adaptability and learn to be highly innovative. And while they are often extremely motivated to succeed, they frequently face multiple obstacles upon release—including housing challenges and limited employment opportunities, as well as a lack of family and community support. The goal of EARN is to remove those barriers and create a platform for people coming out of prison by allowing them a chance to develop their ideas while living in a restorative sustainable community.

We cannot change the harm we’ve caused our communities, but we can learn to be accountable for that harm and work to never do so again. And, most importantly, we can learn to give far more than we take. It may seem small to many people, taking care of chickens and bugs. However, it feels good to be a part of something—supporting the growth of a living being—and giving back to our planet.

Christopher Blackwell, 40, is serving a 45-year prison sentence in Washington State. He co-founded Look 2 Justice, an organization that provides civic education to system-impacted communities and actively works to pass sentence and policy reform legislation. He is currently working towards publishing a book on solitary confinement. His writing has been published by the Washington Post, The Boston Globe, Huff Post, Insider, and many more outlets. You can follow him and be in touch on Twitter: @chriswblackwell

Nick Hacheney is incarcerated at the Washington Corrections Center. He is a longtime advocate for environmental and educational programs in prison. He has previously published in BioCycle magazine, The Crime Report and presented a Tedx Talk on the environmental program he founded in prison. He is also the co-founder of Environmental Advancement Reintegration Network (EARN), a business incubator/launching platform for prisoners seeking to build an environmental solutions business upon their release.

Beautiful story. There is something about digging into the dirt with your hands in the Spring that helps restore my soul. NO ONE is beyond redemption, and I thank these guys for trying to give back.

As per FAO it is estimated that over 50% of food produce is not reaching kitchen tables only to add further landfill stress and emitting Methane Gas. Over 70% of potable water of water resources is used for farming. Water stress and water footprint are some of the pressing issues for many. Why “Grow and Throw”? Why not recycle post farm produce? Why not create circular economy from food waste streams? Why not curb Methane Gas from the source? Why not empower with equal economic for many who are falling through the cracks? The answers are available. Innovation to propel… Read more »

Great initiative It will be wonderful if greenhouse to grow fruits and vegetables is also added. Food waste is also converted to 100% Pathogens Free water and sterile biomass ideal for soil amendments and feeds for fish and poultry.
#sustainabilityisnecessity
Visit http://www.provectusenterprising.com for details.

great story with good work being done, keep your hands dirty in the good clean dirt!

Popular
7 Smokable Plants You Can Grow That Aren’t MarijuanaBrian Barth
Is Beet Juice the Future of Deicing City Streets?Dan Nosowitz
Record-Breaking Egg Profits Prompt Accusation of Price GougingClaire Carlson, The Daily Yonder
Could New York Become the Mushroom State?Sara Foss
6 Differences Between Llamas and AlpacasAndrew Amelinckx
Explore Modern Farmer
Related
Features, Food Security, Labor
The Rise of Virtual Farmers MarketsLeah Borts-Kuperman
Environment, Labor, Water
California Farms and Farmworkers Attempt to Recover From Record FloodsNaoki Nitta
Food Waste, Opinion, Politics, Technology
How Solar-Powered Refrigerators Could Cool Down Climate ChangeAbay Yimere
MTMF, Plants
This Modern Farmer Wants You to Grow a New Potato StrainBevin Cohen
wpDiscuz
We use cookies on our website to give you the most relevant experience by remembering your preferences and repeat visits. By clicking “Accept”, you consent to the use of ALL the cookies.
Cookie settings ACCEPT
Privacy & Cookies Policy