Will Hempcrete Ever Catch On? - Modern Farmer
Environment, Plants

Will Hempcrete Ever Catch On? 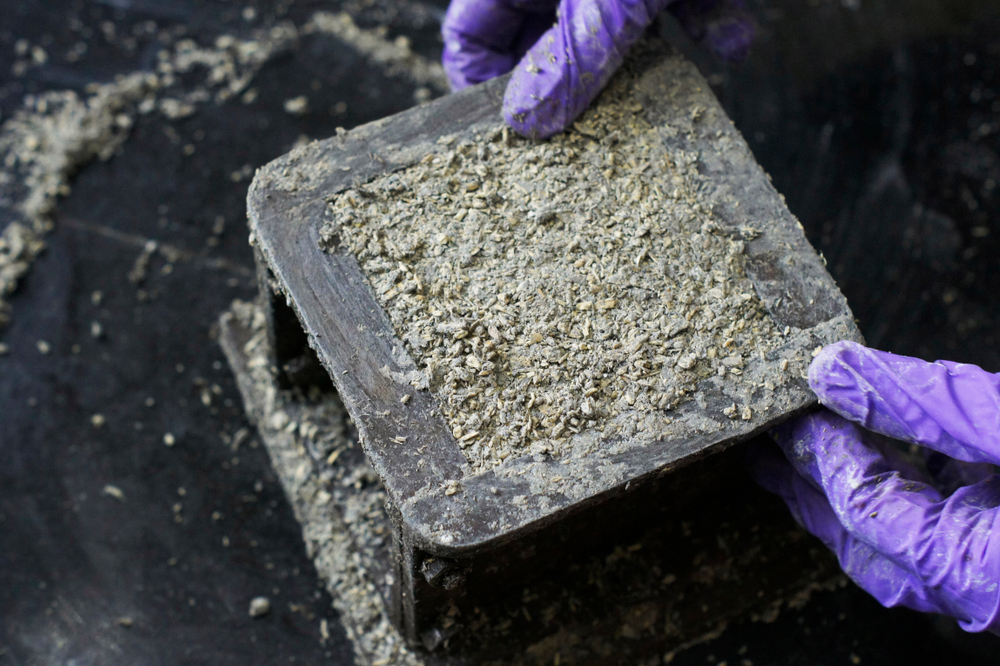 A fresh mix of hempcrete being cast into a cube mold.
Photography by Tarun Jami, Shutterstock.
Share
Tweet
Pin
Email

Hemp mixed with a lime binder makes green builders drool. Called hempcrete, this insulation material resists mold, fire and pests. It lasts forever (or close enough). It absorbs carbon. It’s commonly used in construction in Europe and Canada. With sustainable building materials worth billions of dollars, it has the potential to take off here, too.

But few farmers in the US grow hemp for that purpose. They grow hemp for CBD, for bioplastics, for food and for mulch. They’ll grow hemp for cat litter. But not for hempcrete, which uses a different crop, known as fiber, from the more popular CBD cannabinoid variety that yields CBD. There’s no market to speak of for hempcrete, and therein lies a dilemma.

Farmers need reliable customers and economies of scale. They need to live near a processing center—few facilities exist across the country—or else pay a lot for shipping the product. And few construction professionals have embraced hempcrete because it’s so new to the US and, for now, costs more than traditional products. The rare builders that do work with it generally can’t get enough local hemp. So they import from overseas, especially from Europe, where experience has created consistent quality.

“It’s the chicken and egg,” says Rusty Peterson, a Michigan hemp producer. “Farmers won’t grow at any volume until they have guaranteed processing and a consistent supply chain.” 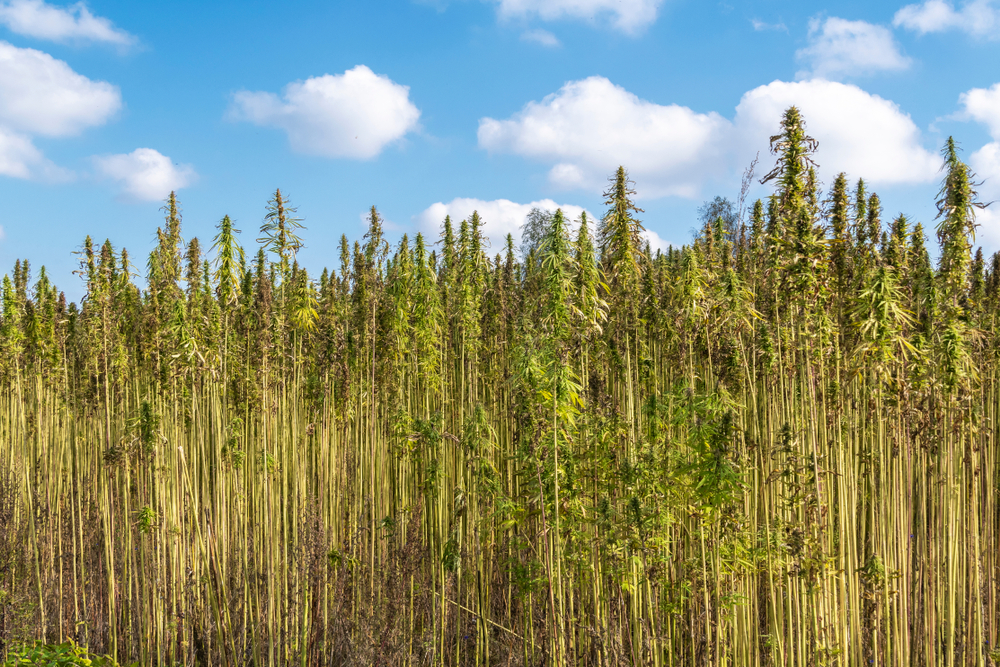 A field of industrial hemp. Photo by alexkatkov, Shutterstock.

Hemp is versatile. It can be used for 25,000 different products, including fabrics, bio-fuel and cosmetics. But growing it involves trial and error, seeing that cultivation was only legalized on a national level in 2018. Nearly all the plants under production in the US are of the cannabinoid variant. The stalky fiber type, in contrast, has more industrial applications, including hempcrete. For now, it accounts for a fraction of production, even though it’s easier to farm than the horticultural cannabinoid.

Even those who grow the fiber often steer clear of hempcrete. Take the owners of Eaton Hemp, whose hemp farm was the first in New York to be licensed in 2016. The company quickly forged a niche for snacks and pet bedding, and this year is on pace to quadruple gross profits from 2020 to $1.2 million. It wagered on growing demand for plant-based food and organic goods, rather than create a market that didn’t exist at a price point that’s above what comparable stuff is going for.

“[Producing] hempcrete might be something we look at down the road if it made sense,” says Dan Dolgin, co-founder and CEO of Eaton Hemp. “We probably don’t grow enough here to justify that. For hempcrete to be viable, you’d need tens of thousands of acres to be grown.”

Many farmers burned by a glut in CBD have quit hemp entirely; total licensed acreage has plummeted 44 percent since 2019 to about 285,000 acres as of late September, according to Hemp Industry Daily. Farmers are only slowly pivoting to the fiber option.

Yet the potential is huge. The hardy hemp stalks flourish in diverse soils and climates. Grown in rows like rotational crops such as corn, soybeans and wheat, they can be farmed with existing machinery. Once harvested, the stalks yield three components—seeds, bast (long fibers that work for textiles and plastics) and hurd, the bamboo-like interior that suits building supplies such as particle boards and hempcrete. 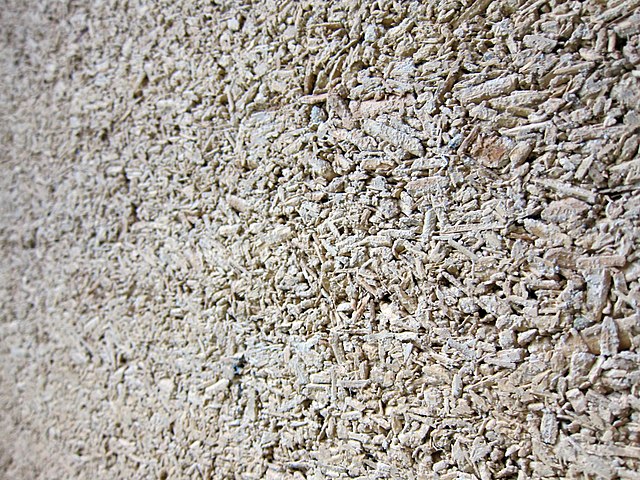 A hempcrete wall. Photo via Wikimedia.

But hempcrete has a big barrier: Most building professionals have never worked with it. Some mistakenly think it substitutes for concrete. (Wrong: Hempcrete serves as a filler that cannot bear weight, unless compressed.) They have never cast it in place, the most common application method that is messy and prone to human error. They have never sprayed it, an alternative technique, or estimated the load-bearing potential of prefabricated blocks.

“Most people don’t even know what it is,” says Jacob Waddell, president of the US Hemp Building Association. “Architects, general contractors, regulators. Farmers think it’s something to get high. It’s a very complicated puzzle to educate people.”

Permits are particularly tricky. No national guidelines, test methods or specifications for hempcrete exist. Building codes differ from state to state and even county to county, and approval depends on whether your local official embraces innovation. Many don’t.

To counter that, the Association is trying to establish best practices and rules for acceptance by the International Code Council, the trusted source for standards in the construction industry. It is aiming for next year and hopes that new codes will prompt a groundswell of interest.

That might be too late for Hempitecture, one of the leading American companies working with hempcrete. After spending years focused on hempcrete alone, it’s pivoting toward hempwool, a product replacement for traditional insulation that doesn’t require complicated manufacturing or authorization.

“It’s more viable to sell a product than a system for building,” says Hempitecture CEO and founder Matthew Mead. “Until there is acceptance by the building community, it’s going to be very difficult to sell hempcrete.”

“Some mistakenly think it substitutes for concrete. (Wrong: Hempcrete serves as a filler that cannot bear weight, unless compressed.)”
Perhaps they should rename this product something other than “-crete” in order to reduce the confusion.

My partner and I am actually starting a hempcrete nonprofit, making tiny homes for homeless/vets/ those effected in natural disasters.
Hope to connect with more people in the industry!

Hemp fibers can be grown in as little as a few months, compared to pine trees which are grown in 12-15 years. They realized they were able to help save the planet by applying the Italian hemp bedding in their barn.

Someone’s going to need to go out on a limb and build a large building that uses hempcrete properly, displaying its’ qualities and benefits, before enough will get on the bandwagon. Need to show people the benefits

Kevin McCloud from the Grand Designs TV show in the UK built 42 houses using hempcrete in Swindon about ten years ago. He made a TV show about that project.

Hempcrete can be used be used in if the mixture is changed and use hurd a different way.
We have made Lintels that can hold 3 ton. Tested at UWA in Western Australia

Here’s the thing about hempcrete. It is expensive, labor-intensive, unfamiliar and it’s ‘benefits’ are marginal at best compared to other healthy or high-performance building methods. A super-insulated wall with blown cellulose is so much cheaper and easier to construct, and has a much lower (negative) carbon footprint. Or if you’re looking for a vapor-permeable ‘mass wall’, then cross-laminated timber (CLT) is a carbon-negative, prefabricated, structural, insulated mass wall which can be constructed super quickly and precisely. I’m all for alternative building strategies, but hempcrete has a long, uphill battle which will need to include a lot of innovation if it’s… Read more »