Could Bubbles be the Future of Pollination? 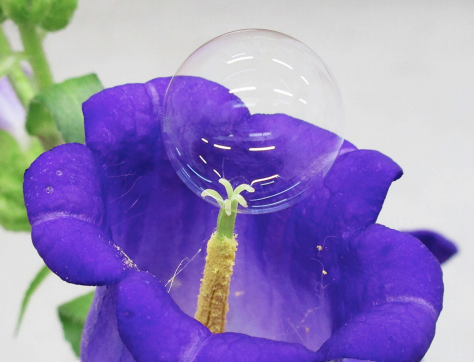 Who needs bees when you have bubbles?

Scientists have worked to identify alternative pollinators for agriculture over the years, as concerns have mounted over dwindling insect populations. Researchers believe that robot bees or tiny drones might one day replace actual honey bees as pollinators if they die off. But if these robots are not ready in time, a group of Japanese researchers has shown that bubbles can be used to pollinate fruit tree flowers.

Scientists at the Japan Advanced Institute of Science and Technology recently announced that they successfully pollinated a pear orchard using soap bubbles. According to a recently released study published in iScience, researchers managed to deliver pollen grains to pear trees in the bubbles without damaging flowers.

“It sounds somewhat like fantasy, but the functional soap bubble allows effective pollination and assures that the quality of fruits is the same as with conventional hand pollination,” said senior author Eijiro Miyako, in a press release. “In comparison with other types of remote pollination, functional soap bubbles have innovative potentiality and unique properties, such as effective and convenient delivery of pollen grains to targeted flowers and high flexibility to avoid damaging them.”

Pollinators play a big role in agriculture, as around 30 percent of food grown across the world depends on them. Miyako and his colleagues built a tiny drone pollinator in 2017, but struggled to figure out how to stop these robo bees from bumping into flowers and destroying them. Miyako came up with the answer one day in the park when a bubble landed on his son’s face.

The researchers loaded a solution which included pollen grains into a bubble gun and let it rip in their pear orchard. Each bubble contained around 2,000 pollen grains.

They then loaded up a GPS-controlled drone up with the bubble solution and tested it on fake lilies. They found that the bubbles were 90 percent successful in hitting their targeted flowers.

Researchers admit the limitations of the method, as bubbles won’t be effective when it’s raining or windy outside, but it could provide a low-tech complement to robot bees.

Crazy. Ineffective. Why not just use drone with brush?

Popular
The Future of Hay Drying in AmericaLindsay Campbell
How to (Actually) Get Rid of Fruit FliesEmily Baron Cadloff
7 Smokable Plants You Can Grow That Aren’t MarijuanaBrian Barth
The Story of Brazil Nuts is Kind of NutsAndrew Amelinckx
When Tractors Invaded D.C.Sam Brasch
Explore Modern Farmer
Related
Plants
There’s a Pumpkin Fungus Among UsLindsay Campbell
Plants
Organic Soybean Prices Spike Despite Huge US Soybean ProductionDan Nosowitz
Food & Drink
Why Global Food Prices Continue to ClimbAlastair Smith
Labor
More Than 10,000 John Deere Employees Go on StrikeDan Nosowitz
wpDiscuz
We use cookies on our website to give you the most relevant experience by remembering your preferences and repeat visits. By clicking “Accept”, you consent to the use of ALL the cookies.
Cookie settings ACCEPT
Privacy & Cookies Policy