Why old Jerseys and Holsteins are becoming, at long last, prized steaks. 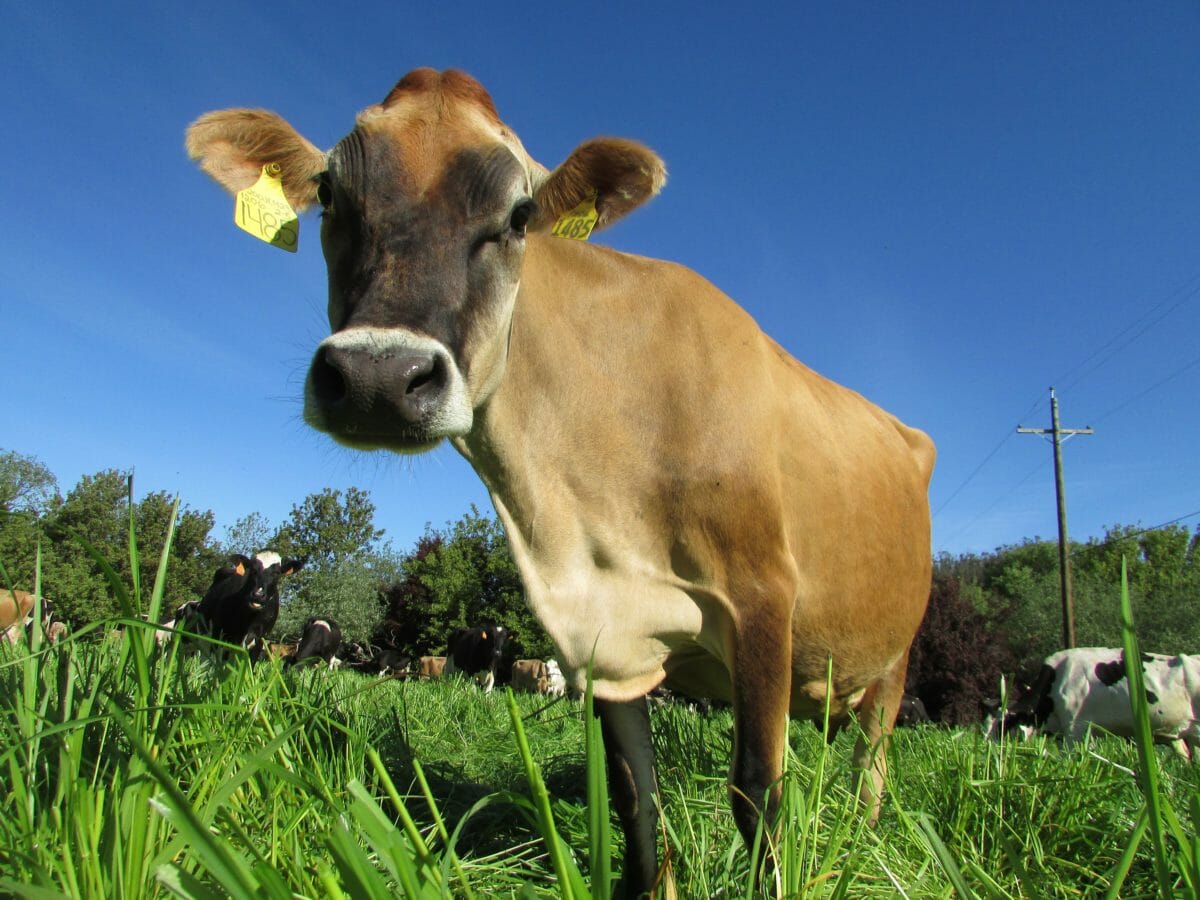 In March, at a restaurant along one of Toronto’s busiest corridors, the dining room was filled with 50-some guests for what promised to be a uniquely beefy evening. Tanto chef Julian Iliopoulos had planned a menu of 15 courses, from oxtail croquettes to a tongue-and-heart terrine, each using a different ingredient or part of a single animal. The pièce de résistance: tallow-aged striploins and rib eyes, cooked over the kitchen’s woodburning grill, each slice dotted with a tiny cap of pale yellow fat.

These steaks weren’t cut from a young Angus or Hereford, which is raised specifically to produce marbled steaks of maximum tenderness as quickly as possible. Like everything else on the evening’s menu, they were from a grass-fed Jersey cow — one that had reached retirement age after a life spent producing thousands of pounds of milk on a dairy farm in southwestern Ontario. “I wanted to give it a proper send-off,” says Iliopoulos.

The reality of retirement for most North American dairy cows is a speedy trip to auction and an immediate future as cheap, commodity-grade ground beef. They’re sometimes called “burger cows.” But Iliopoulos is among a growing number of fine-dining chefs in the United States and Canada who are beginning to rediscover what beef-loving cultures like the Spanish — who serve beef from old cows as a delicacy called txuleta — have understood for generations: What a mature animal’s meat lacks in butter-knife tenderness, it makes up for in intense flavor that can’t be replicated with anything but the passage of time. And, because most North American beef cows graduate from Bovine University by around 24 months of age, restaurants are turning primarily to dairy farms — and their older, smaller, pasture-raised Holsteins and Jerseys — for their mature-cow fix.

Claire Herminjard’s phone has been ringing a lot these days. She is the founder of Mindful Meats, a meat aggregator in Petaluma, California, that sources whole, live animals from certified-organic, non-GMO ranches in Marin and Sonoma counties, where the animals graze on the salty grasses of northern California’s Pacific Coast. “I assumed we would be a ground-beef company because that’s what I read dairy is really used for: America’s favorite burger,” says Herminjard. “Any rancher I talked to would say ‘Good luck getting a steak out of a dairy cow. Never gonna happen — it’s too tough. People are never going to eat it because it’s too tough. Who cares about flavor?’”

Tenderness is the benchmark for most steaks sold in North America. And when it comes to flavor, consumers unwittingly expect the taste of grain-fed beef. “People really love the flavor of corn, but that’s not what beef is,” says Jakob Anderson of Toronto’s Bespoke Butchers, who sources retired dairy cows for restaurants across the city. 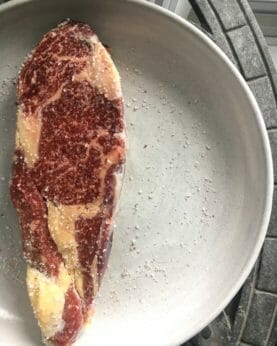 But flavor — real beef flavor, unadulterated by the mechanics of industrialization — is staging a comeback.

At chef-restaurateur José Andrés’s Bazaar Meat in Las Vegas, the Vaca Vieja, or “old cow,” is inspired by the Spanish tradition. It comes from one of the eight- to 10-year-old Holsteins at Mindful Meats. “There is a flavor there that is more potent as time goes on,” says Alex Pitts, the restaurant’s executive chef. “It’s one we haven’t tasted in America in 60 years because we got used to raising animals only for consumption.”

On the East Coast, a rib eye from a six-year-old Holstein, raised on a farm in Virginia’s Shenandoah Valley, has been featured as the centerpiece of the $325 tasting menu at the two-Michelin-starred restaurant Pineapple & Pearls. The steak’s fat cap glowed like Cheddar cheese after the cow’s grass-fed existence ingesting beta-carotene. “While eating steak is something that most of us have experienced, eating that of a dairy cow isn’t as common,” says head chef Scott Muns. “While its texture might be slightly tougher than what the general public is used to from younger cows, the flavor is much more robust. Even the fat is richer in flavor, almost like bone marrow.”

Dairy cows are the most common source for mature beef, but they aren’t the only one. The Meat Hook, a butcher shop in Brooklyn, buys Angus bulls whose breeding days are behind them from Kinderhook Farm in upstate New York. “After you taste a 12-year-old animal, you realize that the steak you’ve been eating your whole life from the supermarket was like a 1 or 1.5, if you had a volume knob of zero to 10,” says co-owner Ben Turley. “And these are like Marty McFly at the beginning of Back to the Future, where he cranks up the guitar and it blows him against the wall.” Last year, the shop began hosting themed dinners at New York restaurants built around the concept of “single-source vintage beef,” a descriptor that sounds borrowed from the vocabulary of artisanal coffee beans or wine. The notion of terroir — being able to taste something about how and where the product was raised — is common to all three. This flavor-first philosophy presents an opportunity to meat purveyors and farmers alike.

“There are 29 steakhouses in Las Vegas right now, and everyone’s serving the same stuff from Nebraska,” says Pitts. “Let’s not serve the same steak as everyone else; let’s do something different. And the results spoke for themselves.” At Bazaar Meats, the menu at José Andrés’s brand-new Mercado Little Spain market hall, in New York’s Hudson Yards, features steak from mature dairy cows from Mindful Meats. 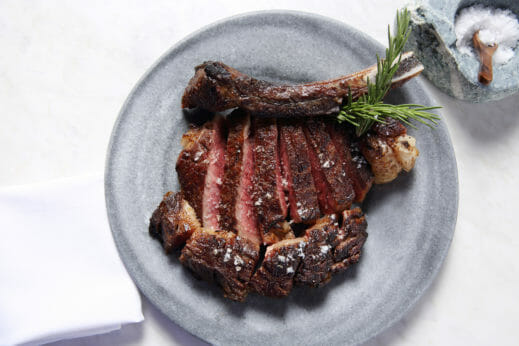 For farmers, a larger market means an opportunity to reap a premium for what would otherwise be sold at bottom-of-the-barrel prices. “We would sometimes pay 50 to 75 percent more than what the market was paying for them,” says Clifford Pollard, owner of Cream Co. Meats, an aggregator and food hub in Oakland, California, that works with dairy farms to identify their choicest pasture-raised organic animals, which are marketed under Cream Co.’s Antique Beef label. “For a ranching partner who was selling us 10 head of cattle every other week on this program, they would make an additional $150,000 to $200,000 a year selling them to us.”

Herminjard and Pollard emphasize that not just any old dairy cow will make the cut. Beyond exacting standards at the dairy farm level, the key is to target specific animals that meet high standards for qualities such as body condition. “There’s nothing convenient about it,” says Pollard. “It takes a long time to raise. Not every animal is equal. There’s a lot of handling and a lot of aging to actually get it to the point where it’s going to be this incredibly special experience.”

For the mature-meat movement to continue to grow, education is key for restaurants (about the culinary benefits of working with older animals), for consumers (who have long been conditioned to prize tenderness over flavor in their beef) and for individual farmers (who may, for the first time, consider the financial and ecological benefits of raising dual-purpose animals — in many cases, they might not realize the value of the by-product that’s roaming in their own fields). “Some of our suppliers had never tried their own beef before, so we would take them meat,” says Herminjard. “One supplier came out a week or two after we dropped it off and said, ‘Man, that’s so good, it’s like the beef I had when my grandma was around.’ It has that flavor and nostalgia because it isn’t anything new. People had been doing it for a long time, but they stopped. Now, we really are looking back to move forward.”

I wish the mutton made a comeback as well. Unfortunately, everywhere I look, there is “lamb” meat. Hardly any flavor.

My grandfather was a butcher.

What about using the meat for braising as in daube–the result should be excellent–the toughness cooked out, but the flavor remaining. Now all we need is to find is old fashioned “horse corn” (as it was called in south Louisiana). Its flavor was superb, but all the corn at markets today has only one flavor–sweet!

Popular
7 Smokable Plants You Can Grow That Aren’t MarijuanaBrian Barth
Hell in High Water: The Story of Devils Lake, North DakotaSharlene Breakey
Record-Breaking Egg Profits Prompt Accusation of Price GougingClaire Carlson, The Daily Yonder
6 Differences Between Llamas and AlpacasAndrew Amelinckx
New Solar Panels Allow Farmers to See the LightNaoki Nitta
Explore Modern Farmer
Related
Politics
Trump Administration Wants to Let Pork Industry Regulate ItselfDan Nosowitz
Food & Drink
Lab-Grown Meat Gets Closer to Store ShelvesDan Nosowitz
Food & Drink
Reinventing the Meat Market: How Arkansas Ranchers Are Scaling Up Without Selling...Brian Barth
Animals
Tips and Tricks for Keeping Cows Happy (Hint: Nix The Contrasting Colors)Dan Nosowitz
wpDiscuz
We use cookies on our website to give you the most relevant experience by remembering your preferences and repeat visits. By clicking “Accept”, you consent to the use of ALL the cookies.
Cookie settings ACCEPT
Privacy & Cookies Policy