Biogas vs. biofuel? DIY or pre-fab? Is it legal? How much maintenance is required? 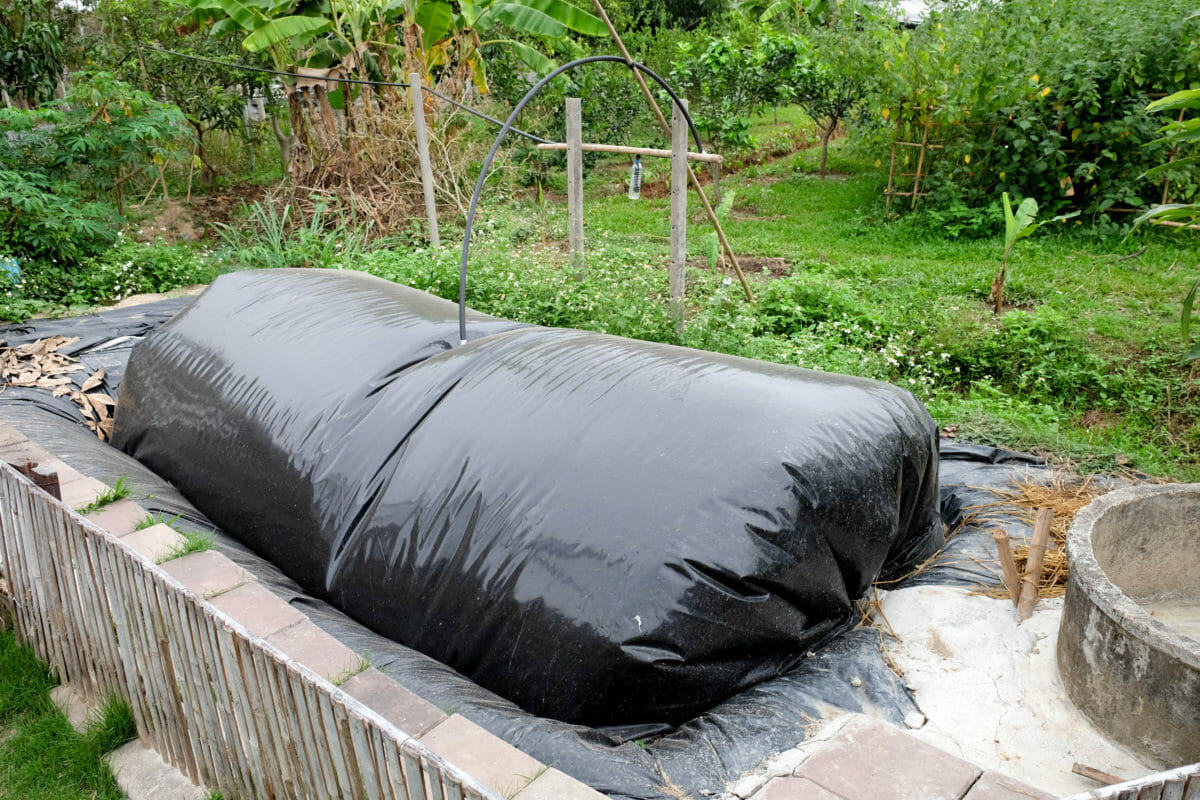 Biogas digesters – a simple form of technology that turns waste into fuel – have been around for centuries. But only recently have intrepid urban homesteaders begun adding this nifty piece of equipment alongside their chicken coops, vegetable gardens, and rain barrels.

One way to bring biogas to your home is by purchasing a ready-to-use system. HomeBiogas offers a backyard-scale model that retails for under $1000. The Israel-based company claims to have sold their devices, which resemble a small tent and are capable of producing an hour of cooking fuel per liter of food waste, to about 1000 families in 76 countries.

It’s also possible to build a biogas digester DIY-style, but keep in mind that doing so is significantly more complex than creating a compost pile or installing a rain barrel.

Even if you buy a pre-fab kit, successfully converting waste to usable fuel takes dedication – and, sometimes, a lot of trial and error. That’s why we’ve created this little tutorial to fill you in on the basics. Think of it as Biogas 101. Let’s begin class:

What Is the Difference between Biofuel and Biogas?

Organic waste, whether animal manure, humanure, grass clippings, or food scraps, can be converted into liquid fuel (ethanol) or gas fuel (methane). The former, often referred to as biofuel, is produced on a large scale in the Midwest, mixed with petroleum-based gasoline, and sold at gas pumps throughout the country. The latter product, often referred to as biogas, is sometime harvested from landfills, sewage treatment facilities, and the manure lagoons at factory farms, which typically convert the fuel to electricity to power their operations.

How Can I Use Biogas?

At the home scale, biogas is not typically converted to electricity, but used directly as a cooking fuel. Biogas is nearly identical to fossil fuel-based natural gas, and can be used in household applications like furnaces, water heaters, stoves, and ovens. Minor modifications may be required on some appliances, however (converting a standard stove, for example, simply requires the removal of the pressure-reducing nozzle inside each burner). Biogas digesters also produce liquid and solid byproducts, which may be used as fertilizer.

How Does a Biogas Digester Work?

Most people are familiar with aerobic decomposition – this is what occurs in any successful compost pile. Anaerobic decomposition, in contrast, is what takes place in the mucky soils of a swamp, or in a waterlogged compost pile. The microbes that naturally proliferate in such conditions give off awful, gaseous smells as they do their work. Those gases are combustible if captured in a sealed tank or other container – and by capturing the gas, you also capture the smell.

The Internet is awash in DIY digester designs, but all employ a few basic features. The main component is a sealed tank where the digestive process (decomposition, that is) takes place and the gas is collected. This could be a 55-gallon drum, a plastic water tank, or a rubber “bladder” (imagine a giant Ziploc bag made of thick rubber). The feedstock (i.e. manure, kitchen scraps, etc.) is deposited through a chute on one side of the tank; some systems also incorporate a grinder that shreds the material into a uniform sludge, which increases the efficiency of the device.

On the opposite side of the tank, an overflow valve allows wastewater to be diverted for irrigation, while a valve on top channels methane to household appliances through the ordinary gas pipe found any home supply warehouse. A special type of filter must be fitted onto the gas line to remove hydrogen sulfide, a naturally-occurring, but extremely stinky, component of biogas.

A simplified illustration of how a biogas digester works. Photo by Pavlo S / shutterstock.com

Can a Biogas Digester Be Used in Any Climate?

Biogas digesters are most common in tropical countries because the microbes that do the magic require warm weather to proliferate – 70- to 80-degree temperatures are needed day and night for optimal performance. In colder climates, they are often placed in a greenhouse or underground for insulation. Otherwise, some form of artificial heat must be provided to ensure a reliable source of fuel in the winter months – which defeats the purpose, of course. Summer-only operation is always an option.

What Kind of Maintenance Does a Biogas Digester Require?

The daily operation of a biogas digester consists primarily of adding the raw materials and harvesting the nutrient-rich water that overflows from the tank (living tissue is primarily water, which is released in the process of decomposition). The thick sludge that accumulates at the bottom of the tank must be removed occasionally (it is an excellent fertilizer).

It is also important to monitor the pH inside the tank on a regular basis. Depending on the raw materials used and other environmental factors, the slurry inside the tank can easily tip toward the acidic end of the pH scale, which causes the microbes to die off and biogas production to cease. Acidification is easily remedied with the addition of an alkaline substance like lime or baking soda.

While biogas is, of course, flammable, small-scale digesters do not pressurize the fuel to the degree of, say, a propane tank. This reduces the risk of explosion to almost nil. If the gas does escape from the tank, it simply dissipates into the air. Ventilation is required when using a digester inside a greenhouse, as breathing the gas in an enclosed space is hazardous to health.

American building codes, to our knowledge, do not directly address home-scale biogas digesters. Most people using them are unlikely to seek permission from local authorities, nor is it clear that they are required to. In essence, biogas digesters are simply a wet, enclosed compost pile, and that is certainly legal. On the other hand, they could be viewed as a device to hold flammable gases, which is the sort of thing that concerns building inspectors. Proceed at your own risk.

What’s Better: DIY or a Kit?

The trade-off here is price versus willingness to tinker. Biogas-producing microbes are finicky and may not do their job if conditions aren’t just right – so it may be totally worthwhile to pay for a product that has been refined by professional designers who have worked out all the kinks. On the other hand, a DIY digester can be built for as little as $50 in parts.

How Can I Learn More/Connect with Others?

There are numerous books on the subject and countless websites. One of the best online resources is the biogas guide published by the National Sustainable Agriculture Information Service. The online chat forum Permies includes many biogas-related threads, where enthusiasts exchange ideas and inspiration.

i am interested in modern farming using organic methodologies

I am a biogas consultant. Would like to work with you.

Related
Opinion, Technology
Opinion: The Rise of Precision Agriculture Exposes Our Food System to New...Austin C. Doctor and George Grispos
Animals, Environment, Plants
Farmers’ Battle Against, and Now For, MilkweedJennifer Taylor
Opinion, Plants
Opinion: Community and School Gardens Don’t Magically Sprout Bountiful BenefitsMitchell McLarnon
Politics
Lawmakers Are Exploring Ways to Support Beginning FarmersShea Swenson
wpDiscuz
We use cookies on our website to give you the most relevant experience by remembering your preferences and repeat visits. By clicking “Accept”, you consent to the use of ALL the cookies.
Cookie settings ACCEPT
Privacy & Cookies Policy