Humanure: The Next Frontier in Composting - Modern Farmer
Lifestyle

Humanure: The Next Frontier in Composting

Garden-to-table is all the rage. Why not toilet-to-garden? 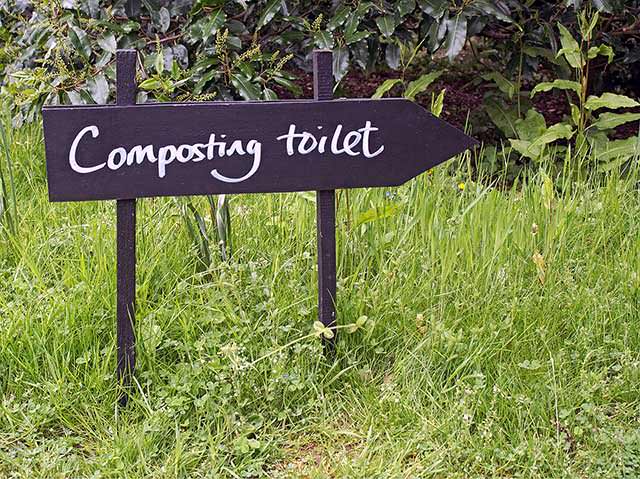 No, your composting toilet doesn't have to be an outhouse in the backyard. There are plenty of in-home, comfortable (non-smelly) options to consider.
Share
Tweet
Pin
Email
3K Shares

The gleaming white commode, a mainstay of modern civilization, is not something most folks question. But anyone who does stop to ponder why we flush our feces and urine into nearby streams and rivers (albeit via a wastewater treatment plant) quickly sees that this is a rather daft arrangement. Human waste, just like manure from farm animals, is high in nutrients and organic matter. Flushing the toilet isn’t just a waste of waste. It’s pollution. Why not recycle it as fertilizer?

Before you say, “ick!” it’s worth noting that this was common practice until the flush toilet was invented some 400 years ago. In China, “night soil” was collected from each urban household along with the garbage as recently as the 1960s; returning human waste to the land was seen as vital for maintaining soil fertility on the farms that sustained city dwellers.

Today, in developed countries at least, composting human excrement is largely a hobby of hard-core environmentalists, who see the toilet-to-sewer pipe system as a crime against our nation’s soils, not to mention an absurd way to use fresh drinking water in an era of mass droughts. But in the last decade, humanure has slowly lurched into the mainstream. Community groups from Chicago to Austin to Marin County, California are egging their city councillors to consider public poop collection in one form or another.

Greater public awareness, and acceptance, of humanure composting is due in no small part to the efforts of Joseph Jenkins, a roofing contractor in northwestern Pennsylvania who has been fertilizing his garden with the stuff for nearly four decades, and actively advocating for the practice across the country since publishing his book, The Humanure Handbook, in 1995. Something of a cult classic, the book is now in its third edition and has been translated into more than 12 languages.

The following guidelines are based loosely on Jenkins’ methods, as well as my own personal experience. 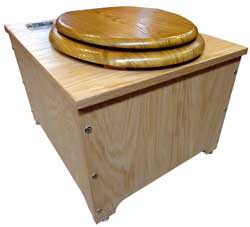 Joseph Jenkins’ “Loveable Loo” compostable toilet, which he sells for $400. Anyone with power tools and carpentry skills could build their own in an afternoon.

Options for collecting humanure in your bathroom range from rustic, such as a 5-gallon bucket with a snap-on toilet seat (available at hunting and camping stores), to turnkey, such as the Sun-Mar line of self-contained composting toilets (available online and from home improvement stores). The latter can set you back a couple thousand dollars or more, but are close enough in user experience to a conventional commode that any less-than-enthused family members will hardly notice the difference.

For $400, Jenkins offers the Lovable Loo: an attractive wooden cabinet with a toilet seat on top and space for a 5-gallon bucket inside. Anyone with power tools and carpentry skills could build their own version in an afternoon.

The biggest challenge is often finding space for a humanure toilet. If you’re bathroom is tiny, the 5-gallon bucket method is ideal because it can easily be slid out of the way when not in use. Prefabricated composting toilets are bulkier, and the fancier models require a pipe to pass through the floor to a collection bin below. You might consider converting an extra closet in your home into an additional bathroom to install one of these.

Urine provides extra nitrogen for the composting process and does not have to be kept separate from the humanure. However, you may wish to capture some or all of your urine in its own bucket and use it as a liquid fertilizer. As long as you dump it within a few hours, it doesn’t smell. First dilute it with at least five parts water to one part urine, as urine is so high in nitrogen and will damage your plants if used straight.

Prefabricated composting toilets vary in design and operation; just follow the instructions. If you are using a 5-gallon bucket or similar collection method, you’ll need to have sawdust or some other absorbent, biodegradable material on hand at all times to cover your droppings each time you use it – for number one or two. This is essential to reduce odor, and also provides a carbon-rich material to aid the composting process.

Lumber mills often give away sawdust for free, just make sure it’s not from pressure-treated wood. Rice hulls, coco fiber, and shredded peat moss are also suitable composting materials, all of which may be found at farm and garden suppliers. Before using an empty bucket, fill the bottom with an inch or two of the composting material.

From Toilet to Garden

Once the container is full, the contents may be emptied into an outdoor compost pile. A classic three-bin composting system is ideal. Spread six to eight inches of leaves, straw, or other composting materials on the bottom before adding your first batch of humanure to ensure good drainage. Each time you add a batch of humanure, cover the contents with several inches of composting materials. Scrub the bucket with warm soapy water (a long-handled toilet brush is ideal for this), disinfect with diluted bleach, and let it dry before returning it to use.

As the pile grows, use a shovel to create a depression in the center and deposit the fresh humanure there each time. This positions the fresh material in the part of the pile with the greatest biological activity to quickly break down the humanure – and always cover fresh additions with several inches of composting material.

Placing fresh material in the center also promotes aeration, eliminating the need to turn the pile with a pitchfork, as is often suggested in composting books and classes; unlike compost piles for kitchen waste, you should never turn a humanure compost pile since this risks bringing fresh human waste to the outside of the pile where people or pets could come into contact with it.

Once the compost bin is full, let it sit for at least one year for the final stages of decomposition to take place, and start a new pile. After the first pile has “matured,” use it in your garden beds as you would any compost product.

Compost piles made in this fashion reach temperatures of over 160 degrees Fahrenheit, which is high enough to kill any harmful pathogens that are present in the humanure. Letting the compost sit for a year is extra insurance against pathogens, as they cannot survive for an indefinite period without a human host. Jenkins has summarized much of the scientific research on the subject here.

There are several common sense precautions to keep in mind, however. Don’t touch the humanure as you transfer it from the collection bin to the compost pile; you can always wear gloves for this part as a safeguard. Have a dedicated shovel for the humanure compost pile and store it in a way that young children, or anyone who may not realize that it’s been used for human waste, will not come into contact with the dirty end of it.

Also, don’t build the compost pile on boggy ground or in an area prone to flooding. A well-drained site is essential to prevent water contamination, and for maintaining anaerobic conditions in the pile.

While properly composted humanure is completely safe, as a final precaution you may wish to apply it only around fruit trees, berry bushes, and ornamental plants where there is no chance of it coming to contact with something you’re going to eat.

If you notice a foul odor from your humanure toilet, simply add more composting material. As long as your droppings are well-covered, they shouldn’t smell. However, sawdust will make your bathroom smell like a lumberyard. While some people may find this quaint, others prefer to use composting materials with a more neutral odor. Some humanure enthusiasts even seek out exotic compost materials like cacao hulls or coffee grounds as a natural air freshener. I once knew a guy that sourced compost materials from a local chai company – his bathroom smelled like potpourri!

In a typical residential home with modern plumbing, it is not illegal to add a self-contained composting toilet. And as long as your compost pile is neat and reasonably odor-free, you shouldn’t be subject to any municipal nuisance laws, either. However, selling your humanure compost is definitely illegal, so don’t do that. Here is a more comprehensive review of the legal ramifications of humanure.

Great article. Can you use a compost bin? We aren’t at the property enough to have an open bin.

What about cat litter? I have a bag of cleanings from their litter box… how does that fit into composting?

Hi, this article is incomplete. Most major cities contract with composting companies that produce compost and conventional fertilizer from humanure. These products are used on edible crops abroad.
The largest handler of humanure in the US is Synagro (synagro.com).

Hoping you & yours are safe & well. Thanks. Drinking water is in short supply and wells are drying up in many parts of the world, including parts of the USA. Why go on contaminating our water supply? It’s inane. Only the “Ick factor” prevents composting humanure. Bravo Joseph Jenkins. If anybody in the Philadelphia area is intersted, they are welcome to contact me. Let’s make a positive contribution. Thanks from Bob Gordon [email protected]