Complying with new regulations that previously governed only meat, dairy, eggs, and processed foods threatens to put many growers out of business. 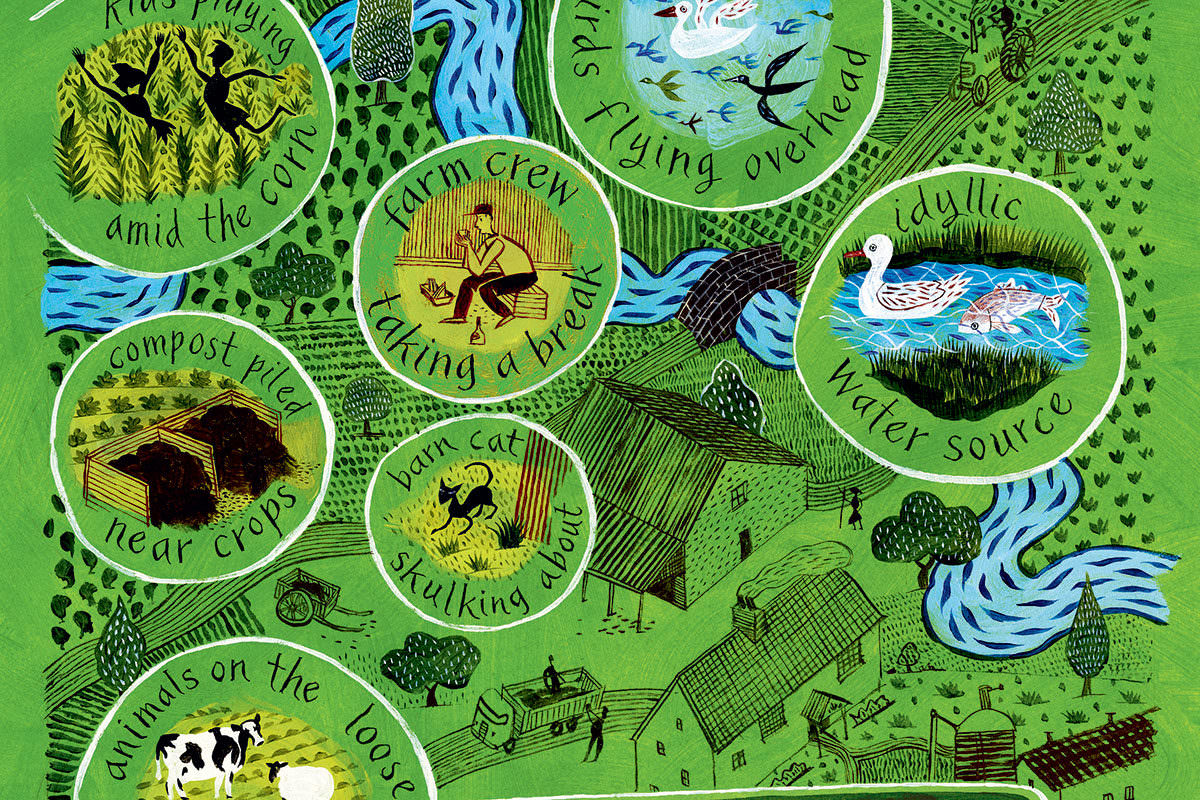 ON SEPTEMBER 2, 2011, the Colorado Department of Public Health reported seven cases of listeriosis to the national Centers for Disease Control and Prevention (CDC). Over the next nine days, the CDC identified 65 additional people from multiple states who had been infected by the same listeria strain, and traced it back to cantaloupe grown on the Granada, Colorado, farm of Eric and Ryan Jensen. By the time the outbreak subsided in late October, the number of documented cases totaled 147, including 33 fatalities – the deadliest episode of foodborne illness our country had witnessed since 1925.

Following a two-year investigation that revealed substandard fruit-washing practices, the Food and Drug Administration (FDA) arrested the Jensens, making them the first produce farmers the federal agency had ever charged with a criminal act: “introducing adulterated food into interstate commerce.” The brothers wound up getting off relatively easy – six months of home detention and $300,000 in restitution – but the day they were taken into custody, the FDA issued a press release stating that the charges should “send a message” to similar would-be criminals, i.e., fruit and vegetable growers. (See “Dirty Deeds: Recent Food Safety Crimes“)

The legislation subjects fresh fruits and vegetables to the same regulations that previously governed only meat, dairy, eggs, and processed foods.

If farmers were concerned then, they’re panicked now. Months before the tainted-cantaloupe saga began playing out on the evening news, Congress had enacted the Food Safety Modernization Act (FSMA) to far less public fanfare. The legislation, aimed at ratcheting up FDA scrutiny across the board, subjects fresh fruits and vegetables to the kind of stringent regulations that previously governed only meat, dairy, eggs, and processed foods. And though the law’s been on the books since 2011, the FDA took years to figure out how to implement the produce component. So the Produce Safety Rule didn’t go into effect until January 2016, at which point the agency granted a two-year grace period for compliance. Translation: The clock runs down on January 26, 2018. Tick. Tock.

“This is sending shock waves through the industry, because the act applies legal standards for processed food to growers,” says Paul Underhill, co-owner of Terra Firma Farm, a 250-acre organic operation in Winters, California. “Unlike a company that sells cooked food, we don’t have total control over potential contaminants.”

The FDA’s current guidelines for FSMA compliance involve determining whether farm animals or random wildlife – birds flying above, squirrels hopping about – might have pooped among the rows. Irrigation water is to be tested frequently for microbes. Employees must wash their hands after eating or using the restroom, and children (less likely to prioritize hygiene) are best kept away from the fields. Each crop necessitates a separate paper trail detailing all of the above, plus multiple steps at harvest, from washing the produce to cold storage. “It’s a complete disaster for diversified farms,” says Underhill, who raises nearly 100 different fruits and vegetables and notes that a single crop, like tomatoes, could be harvested 50 times in one season. 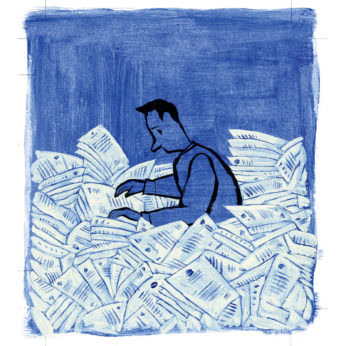 An earlier version of the FSMA rules – they’re still being refined as this issue goes to press – proposed a nine-month interval between the application of raw manure and harvest, in direct conflict with the United States Department of Agriculture’s organic-certification standards. While waste-based fertilizers may seem a prime breeding ground for disease, a 2013 French study published in the research journal PLoS One found that soils high in the microbial diversity associated with manure and compost were less apt to sustain pathogenic forms of listeria.

“Requirements need to be based on sound scientific evidence,” says Kali Feiereisel, a food-safety specialist with the advocacy group Community Alliance with Family Farmers. She points to recent CDC data demonstrating that, for the foodborne illnesses it can link to specific sources, only 0.1 to 5 percent originated on a farm in any year. “The rest of the outbreaks stem from other parts of the supply chain: grocery stores, restaurants, home kitchens,” Feiereisel says. Then there’s the question of whether produce-related incidents are actually preventable: “It’s reasonable to expect farmers to implement commonsense practices, but a black hole of endless checklists may not reduce risk.”

CDC data demonstrates that, for the foodborne illnesses it can link to specific sources, only 0.1 to 5 percent originated on a farm in any year.

Further complications arise for growers who create value-added products, such as jams and pickles, or even chop or freeze vegetables – activities that trigger FSMA protocols for “facilities.” Food hubs and other aggregators of that ilk fall into this category, too, no matter how light their touch. The FDA’s own economic analysis of the law predicted that compliance costs for a facility would average $13,000 per year. The analysis also indicated that farms with annual gross sales under $500,000 would spend approximately 4 percent of revenue to comply, versus 1 percent for larger farms. The danger to public health posed by a produce grower supplying 100 local families is quite different from that posed by an outfit with national distribution – as the 300,000 cases of cantaloupe recalled during the 2011 outbreak attest – something the bill’s Tester-Hagan Amendment acknowledges. Proposed by Montana senator and cattle rancher Jon Tester, the amendment exempts farms with sales below $500,000 from most FSMA requirements, if more than half of those sales are direct to a consumer, restaurant, or retailer within a 275-mile radius (as opposed to a wholesale distributor). For the few requirements that still affect farms of that size, the FDA also extended the compliance deadline by an additional year or two, if sales are under $250,000.

According to Underhill, however, Tester-Hagan’s $500,000 ceiling doesn’t conform to everyone’s definition of a small family farm, given typical agricultural profit margins of around 10 percent. “In some Northern California counties, $50,000 is considered low income. You don’t need to be big to make that much. I know strawberry farmers who gross more than half a million dollars on 10 acres.” He worries that FSMA will hamper organic farmers seeking to scale up: “I’d hate to see a class system in agriculture where you have the big professional growers on top, and then everyone else who will be kept at a certain size by the rule.” 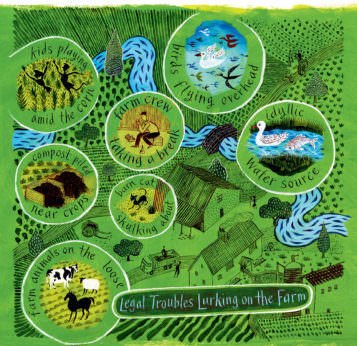 Confusing as the myriad, and continually evolving, rules and guidelines may be, details regarding enforcement remain far murkier. The FDA, empowered by the letter of the law to inspect farms, has relegated the task to state agriculture departments. Will they accept the mission? The Ohio Department of Agriculture, at least, has pledged to do so. In reality, enforcement will fall primarily to third-party auditors. FSMA holds wholesalers, distributors, and processors responsible for all food procured, and they’re not expected to purchase produce from a farm unless it has paid for, and passed, an audit by a recognized firm.

Another final wild card affecting the FSMA rollout: President Donald J. Trump. Last year, his campaign cited the “food police” as an example of government overreach, and his current proposal to cut $108 million from that portion of the FDA’s fiscal 2018 budget would certainly hamper implementation and enforcement.

Regardless, FSMA compliance won’t absolve growers of liability. After all, the Jensen brothers were arrested and sentenced long before the act’s effective due date. For a sure fire safety net, farmers will want our hyper-litigious society’s preferred means of protection – insurance, in this instance, specific policies related to products and product recalls, which tend to be tailored to large, single-crop operations.

“I’d hate to see a class system in agriculture where you have the big professional growers on top, and then everyone else who will be kept at a certain size by the rule.”

Rachel Armstrong, a Minnesota attorney and founder of the nonprofit Farm Commons, points out that a sickened consumer will usually target the grocery store, who will pass the buck down to the food processor or distributor, who will inevitably blame the farmer. Each entity possesses fewer assets than the one above it and is, therefore, more likely to lose in court. Armstrong’s response to frustrated independent farmers: “I’m sorry, guys, but you’re caught between a rock and a hard place. You can’t afford a policy that insures you for the risks you’re likely to experience. In the meantime, grow as safely as you can.” Is that a reassuring legal strategy? “No,” she admits. “But this is a big problem. I honestly think it is one of the biggest problems facing the local food movement right now.”

Related
Personal Essay, Plants
I Failed at Growing Food for Humans, So I Grew It for...Lela Nargi
Plants
Why We Need to Adopt More Orphan CropsShea Swenson
Animals, Food & Drink
Can Finding New Culinary Markets for Green Crabs Help Curb the Invasive...Tim Briggs
Environment, Opinion, Politics
Opinion: With Sky-High Fertilizer Prices, There’s an Opportunity to Grow Crops More...Kathleen Merrigan
wpDiscuz
We use cookies on our website to give you the most relevant experience by remembering your preferences and repeat visits. By clicking “Accept”, you consent to the use of ALL the cookies.
Cookie settings ACCEPT
Privacy & Cookies Policy