Bison vs Buffalo: What’s the Difference?

Confused? Don't worry, we're here to sort this mess out. 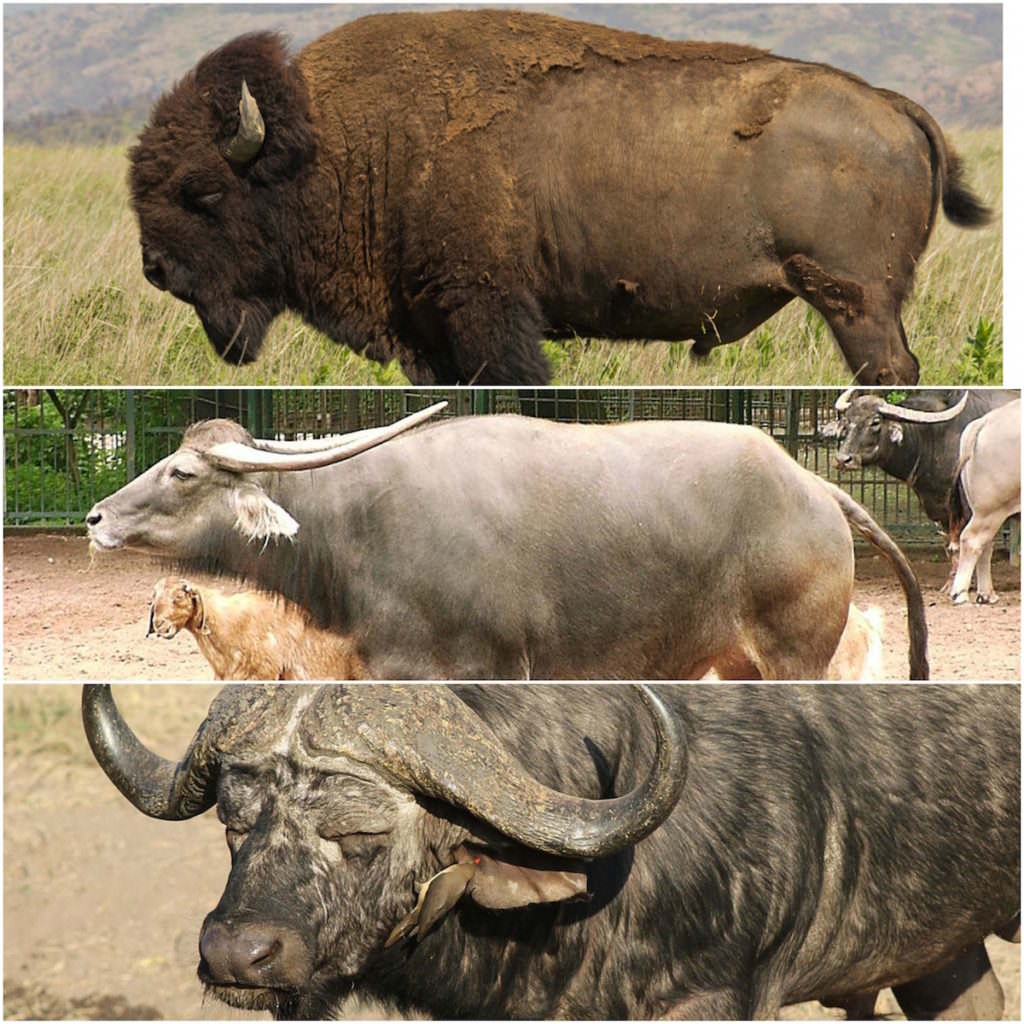 You can blame early European settlers of the Great Plains for all the confusion. They too were confused, calling the vast herds of large, hoofed animals “buffelo” due to their (somewhat) similar appearance to the creatures found in Africa and Asia. They were, in fact, bison.

Here are five distinct differences to help you distinguish between these big boys and girls of the grass-eating world.

1. Bison are Head and Shoulders Above The Buffalo

Bison have a large shoulder hump of pure muscle and a massive head that makes their hindquarters look smaller than their fronts. Both the Cape buffalo and water buffalo have smaller heads and shoulders in proportion to the rest of their bodies, giving them a more symmetrical appearance.

2. The Horns Have It

Both male and female Cape buffalo have large horns in the shape of a handlebar mustache that sweep up on the ends and can grow up to three or more feet across on males. The water buffalo trumps them all with its majestic horns that can have a six-foot span in both sexes. Bison horns of both sexes average around two feet.

Bison have a thick, shaggy coat that keeps them warm in the harsh winter weather of the Great Plains, which they shed in the hot summer months. Both the Cape buffalo and the water buffalo have a thinner coat that they don’t shed.

Bison would fit right in at a Williamsburg coffee shop or hip East Village bar with their long, unkempt beard. Buffalo, however, might feel more comfortable in a Midtown office with a strict facial hair policy; they lack a beard of any sort.

The American bison wins in the length department: Males, called bulls, can grow up to 12.5 feet from head to rump and weigh as much as 2,200 pounds. The Cape buffalo comes in second in length, at around 11 feet and weighs in at a little less than 2,00o pounds. The water buffalo can grow up to nine feet and weigh as much as 2,650 pounds, making it the heavyweight champion. Its tail is also longer than that of a bison, up to 33 inches compared with 26 inches for the bison.

Great article and ty for being very clear on the different descriptions.

Are you serious, have you ever dealt with a Cape Buffalo?

Did you ask Native Americans what they called them? I believe it was Buffalo.

Thank you so much for your very close description of the bison. I was getting very tired of hearing from ignorants that the bison and buffalo are the same thing. It was very refreshing to read your message. Hopefully the ignorants will read it too. You know, they do the same thing with the Pronghorn, calling it an antelope! It is not an antelope and is its own unique animal but they call it an antelope so they can hunt it and shoot it (Nevada…where they shoot anything that looks like it needs to be shot…lol

Good article, but the animal I was referring to is the American buffalo (yes buffalo.) The accounts that I have heard say that in order to increase their numbers, ranchers crossed bison with cattle the resulting animal is referred to as a “buffalo.” My point is I believe that this buffalo does not have a beard but otherwise looks pretty much like a bison.

Check out the Indian Gaur. The American Bison/Buffalo looks like a baby in front of the Gaur.
It stands 6’6″ at the shoulder and weighs 1.5 tons.