We chat with the Michelin-starred chef about farming, local produce, gold-medal cuisine, and, of course, the Olympics. 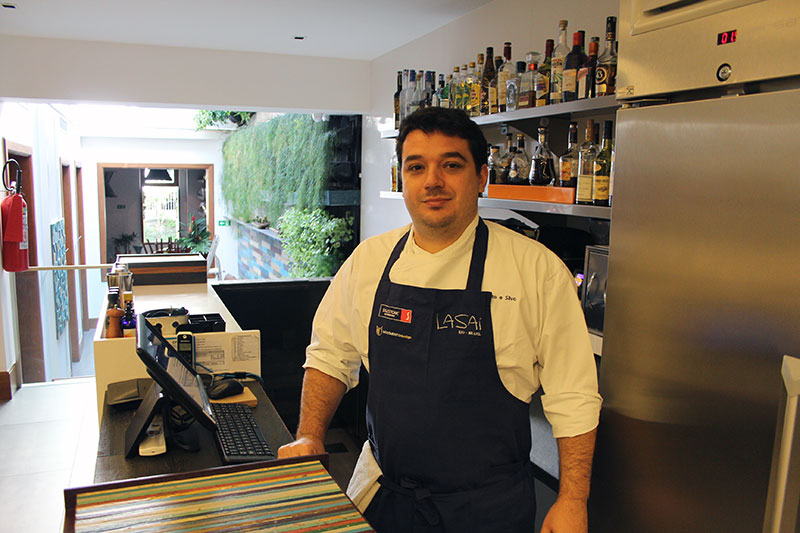 Chef Rafa Costa e Silva in the kitchen of his restaurant, Lasai, early on a Saturday morning - a rare moment of calm during a very busy few weeks of the 2016 Olympics.
Photography Andrew Jenner
Share
Tweet
Pin
Email
100 Shares

After a months-long search for a location, followed by another year and a half of renovations, Costa e Silva opened his restaurant Lasai in 2014, in a 110-year-old house in Rio’s Botafogo district beneath the famously outstretched arms of the Cristo Redentor. Awards, recognitions, and a Michelin star soon followed.

Early on a Saturday morning, with the city in full Olympic swing, 37-year-old Costa e Silva chatted with Modern Farmer about getting fresh and local food in Brazil, the Olympics, and how he stumbled into farming.

Modern Farmer: Why did you come home to Rio?

Rafa Costa e Silva: The idea was to open my own restaurant. Mugaritz was my dream job. I thought nothing would make me as happy as Mugaritz except for my own restaurant, where I could do exactly the things that I want, how I want. I said, “I have to give it a shot.” We decided to open in Rio, to be close to my family, my friends. I was away for 10 years.

MF: How do you describe Lasai?

RCS: We don’t really have a style. We don’t do avant-garde. We don’t do Brazilian food. We cook things that we like to cook – things that I have in my garden, things that we get at the organic street markets here in Rio. We cook in a really simple way. Above all, I want the food to be good. So we just cook good food with really good ingredients. We use almost no butter. Almost nothing’s fried. It’s all just really fresh. 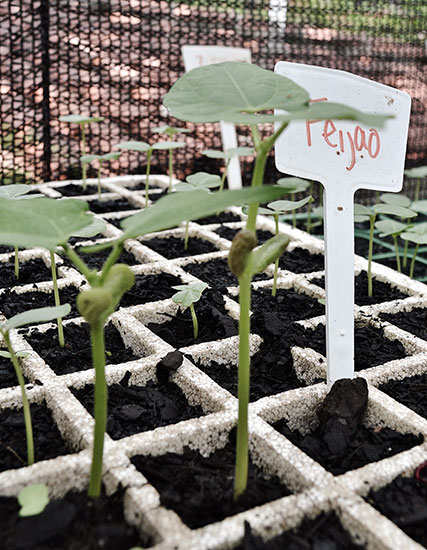 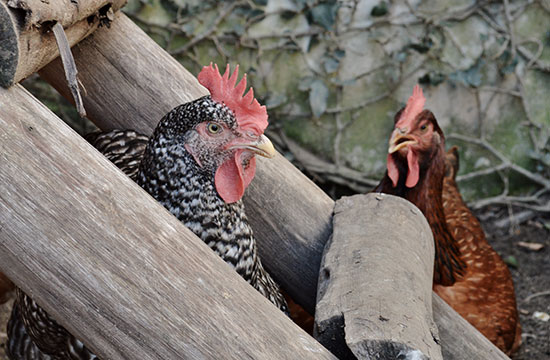 Chickens provide the restaurant with eggs, along with “the freshest compost we could ever find,” according to Lasai’s website. Courtesy Lasai

RCS: We have two menus. One we call “Festival.” You just tell us any allergies or restrictions and we prepare whatever we want with whatever we have. It’s like a surprise menu. Our other menu we translate in English as “Don’t Mess With Me.” You don’t want us to tell [you] anything about the garden, or about the products, or about the producer. You just want to sit down, eat, and leave. It just has an entrée, a main course, and dessert, and we give you some options.

MF: How did you get interested in fresh, local food?

RCS: The five years I was in New York, I never talked to a producer. I would just get to work, go to the walk-in, get my products, cook, and leave. I never paid attention to quality because I was a cook, just doing my job. And then I went to Spain. Spanish people have a completely different view of food. At Mugaritz, we would talk to purveyors. We would plan the menu according to the season. We would make sure the produce was good enough. That’s where I learned to appreciate product quality. In my opinion, Spain is the best place in the world to eat – by far.

MF: What’s been your experience sourcing your ingredients here?

RCS: When I got back [to Rio], I couldn’t find a bunch of products with the high quality that I wanted. I wanted yellow carrots. I wanted parsnips. I wanted rhubarb. And I just couldn’t find them. So we started our garden.

MF: You’re a farmer by necessity, then?

RCS: When I came back to Brazil, I wasn’t thinking, “I’m going to be a farmer.” But when we were opening, I was like, “I can’t get a celery root or a parsnip or a romanesco.” There’s a bunch of vegetables that you just can’t get. So we said, “Let’s try it ourselves.” I’ve ended up liking it a lot. We have a small garden here in Rio. My wife and I built it with our hands on an abandoned a piece of land. Now we just have eight different kinds potatoes planted there, because I don’t have the time or staff to work there more. And we have a much bigger one up in the mountains. There, we have one guy taking care of it full-time. 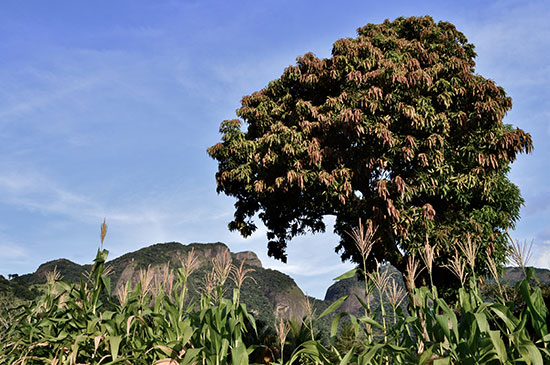 Corn grows on Costa e Silva’s farm in the mountains. Courtesy of Lasai

MF: But you also buy directly from farmers?

RCS: I go to organic markets on Tuesdays, Thursdays, and Saturdays. On Tuesday, I got at like 6:30 in the morning, and I stay there a pretty long time. And we have two producers from the countryside next to the garden I have there. They bring us whatever they have every week.

RCS: Lots of chefs talk about it, but very few go to the markets. They go and they buy a cup of baby carrots and put in on the plate because it’s cool, it’s trendy, and they can talk about it. Here in Brazil, we’re still very, very far from the ideal, and we’re a lot farther than we think we are, because a lot of people who are talking about it, they don’t actually do it. Lots of people who say that they use fresh vegetables buy it from a big central produce market in Rio. It comes from all over the place – from Peru, from Jamaica, from the north of Brazil, from the south of Brazil. It’s not local at all, and it’s not fresh. People think that just because they’re going to this market that they’re buying fresh. Very few people in Rio are actually working with fresh ingredients, because it’s super hard and it’s super expensive. It would be a lot cheaper for me to not have my garden, and to tell you the truth, if some of my products came from this central market, very few people would notice. We garden and source locally because we like it, because we believe in it, and because we think we can change things by doing it.

We garden and source locally because we like it, because we believe in it, and because we think we can change things by doing it.

MF: So there’s a sense of mission to this whole thing?

RCS: I’m not sure… Right now I’m on a mission to make my restaurant survive. We’re really, really, new, and thank god, we’re full almost every day. Last year, even without the Olympics, we only had 10 days when we weren’t full. Having a restaurant like this is very expensive, and it’s the first restaurant that I’ve had, and it’s a little bit challenging for me now. I’m focusing on trying to grow the restaurant, trying to make it more profitable, and not ever losing the quality.

MF: Are you getting lots of business now from people who’ve come to watch the Olympics?

RCS: Yes. In general, our customers include lots of people from abroad, but now it’s even more so. Yesterday, all of the tables were speaking English.

MF: Are you feeling some extra hometown pride now during the Games?

RCS: Yes. Things weren’t all done in the correct ways, but then, what’s the surprise? We are in Latin America. Nothing here is done the way it’s supposed to be done. People always leave things for the last minute. It’s the way people are. The metro could have been working a year ago. It was supposed to have been. But we all knew from the beginning that it was going to happen. So I feel proud, but I think we could have done a lot better. We could have left a better legacy for the city, but we started planning very late and we started doing very late.

MF: The headlines have been making Rio sound like a horrible place. What do you want people to know about your hometown?

RCS: The media can be very malicious. These people are writing about things they don’t even know about. They’re writing from abroad. They’re over-afraid of everything. I came back in 2012. I walk everywhere, and I feel pretty safe. I don’t have any friends, or friends of friends, who have gotten Zika. People are writing about these things without understanding the scale of the problem. Of course, I think that people should write about bad things, because that helps pressure our politicians to improve things. But people should be less afraid of life. I lived in the United States for five years. There’s places where you don’t go at certain times. In Spain it’s the same. It is what it is. But there are so many more things that are good that you could write about.

RCS: The happiness of people. Actually visiting a favela in the afternoon and seeing how it is. People are very nice, people are friendly. It’s a beautiful city. If you go to the countryside, it’s even prettier. As I said, some places you shouldn’t go at certain times, but I think it’s a pretty safe city. At all my tables full of people from abroad now, they’re asking, “Where is all this bad stuff that everybody was writing about?”