It's a Twofer! Eggplants and Potatoes in One Plant - Modern Farmer
Animals, Food & Drink, Plants

It’s a Twofer! Eggplants and Potatoes in One Plant 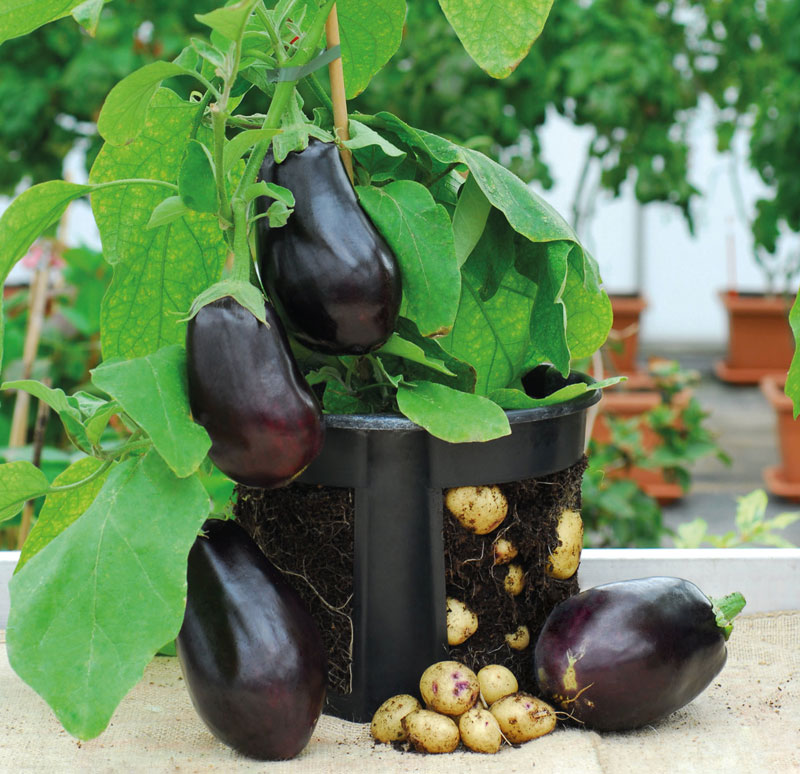 You may be most familiar with the practice as it relates to apple production where grafting is used to make sure the apple varieties you eat have a uniformity otherwise impossible to maintain due to the fruit’s notoriously wonky genetics. Grafting is used with a variety of other plants as well, from citrus trees to avocados to olives. Heck, there’s even one English gent who has been using the technique to grow furniture.

A seed and plant company in England is creating quite a stir with their latest grafted creation, which they’ve named “Egg & Chips,” after a favorite English dish of fried eggs and French fries. Although in this case the eggs are eggplants, also known as aubergine. The chips part is dead on, since the plant produces potatoes as well. The reasoning behind Thompson & Morgan‘s creation is two-fold: The plant lets you grow two vegetables in the space of one and it’s just plain cool. (I’m betting this was the real impetus in its creation.)

Thompson & Morgan, based in Ipswich, has been around since 1855, but it’s only been within the last couple of years that they’ve produced weird hand-grafted plants like the “Tomtato,” introduced in 2013, which produces tomatoes on top and potatoes on the bottom. The concept isn’t actually new – during World War I, the British government tried to boost home-front food production by promoting the plant for home gardeners – but Thompson & Morgan claims to have produced the first commercially-viable version.

The company has been working on the Egg & Chips plant since before introducing the Tomtato, and finally hit upon the right eggplant-potato combination. Besides the cool factor and space savings, there’s the added benefit of having the less hardy eggplant grafted onto the tougher potato roots to help the eggplant thrive in the United Kingdom’s climate. The plant produces between three and four eggplants and about four-and-a-half pounds of potatoes.

According to Kris Collins, the communications officer for the company, the young plants are produced for Thompson & Morgan by Dutch greenhouse growers. Here’s the rundown: They slice a piece of tissue the size of a pinhead from each plant, which are checked for viruses and grown separately in gel and then compost. When the plants are two inches tall and the stems are the same width, they are cut at the exact same angle so they can be grafted together. This isn’t genetic modification a la Monsanto. The two plants remain genetically separate, but because they’re from the same family, Solanaceae, they can be joined together.

“The lower end of the potato plant, containing the tuber-producing roots, and the top section of the aubergine, which will bear fruit, are clipped together for about a week until the two parts naturally fuse together,” says Collins in an email. The plants will be ready for shipping beginning in April and cost about $21 each or two for $28.50. Unfortunately, the Egg & Chips aren’t available in the U.S., but here’s a good primer if you want to try hand-grafting your own version at home.