When you're all sniffly and coming down with something this winter, reach for a bottle of your own home-brewed tonic. 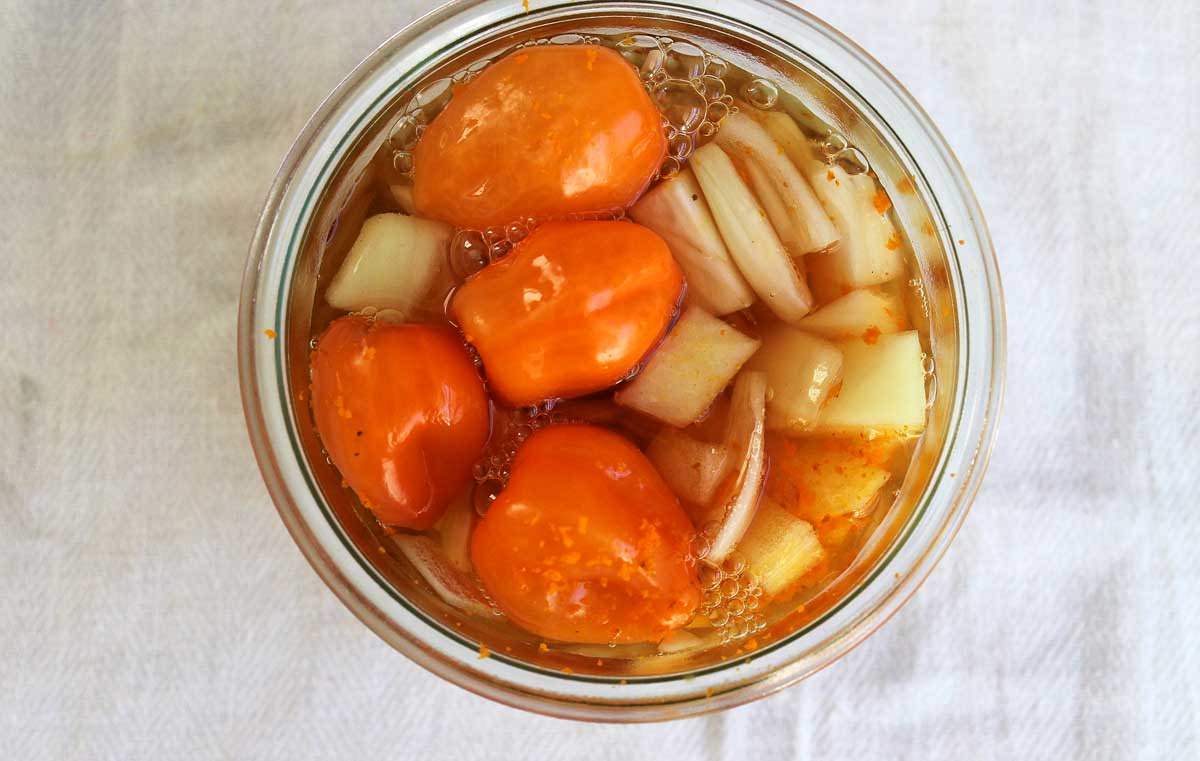 Studies show that garlic may help reduce heart disease; cayenne is effective against arthritis; and ginger is good for a host of gastrointestinal ailments. Besides their other health attributes, ginger, hot peppers and garlic are traditional cold remedies. Herbalists have long combined them with apple cider vinegar – which has numerous purported health benefits of its own, from treating diabetes to promoting heart health – for a powerful herbal elixir: fire cider.

Rosemary Gladstar, the famed American herbalist, is generally credited with first devising the concoction now widely referred to as fire cider back in the 1970s, though it is based on centuries’ old herbal wisdom. There is no set formula and there are lots of optional ingredients you can add, like horseradish and onions. (Trust us, no one may want to get within 20 feet of you after you drink fire cider, but hopefully curing your cold or flu before it floors you will be worth this one sacrifice.) Other common ingredients include lemons, honey, and savory herbs (like rosemary, thyme, sage, parsley and chives), which all add health attributes of their own to the brew, but also help to balance out the flavor profile.

It takes just 20 to 30 minutes to make a batch of fire cider, but then you need to leave it to brew for a few weeks before it’s ready to use – all the more reason to start a batch now, so when those achy, stuffy feelings suddenly arise, you can nip them in the bud.

We’ve provided a recipe below, but don’t feel like you have to use all of these ingredients or the exact quantities. Starting with a base of hot peppers, garlic, ginger, and apple cider vinegar, you can add other ingredients that most appeal to you. After you make a few batches, you’ll undoubtedly come up with your own custom recipe.

Add all the ingredients to a quart mason jar. Use enough vinegar to cover the solid ingredients by an inch or two. The vinegar will corrode typical metal mason jar lids, so use a plastic lid if possible, or simply place a piece of wax paper between the lid and the jar (the lid can be screwed into place with the wax paper between it and the mouth of the jar). Shake vigorously for about 15 seconds and store the jar on a shelf at room temperature. Let the herbs steep in the vinegar for at least two weeks; preferably for four weeks. Then strain the solid ingredients from the vinegar and store your fire cider in a glass jar. It will keep for several months at room temperature, and for up to a year in the refrigerator.

Take a tablespoon or two of fire cider whenever you feel the first onset of cold and flu symptoms, and every four to six hours until symptoms subside. You can also take shots daily as a preventative during cold and flu season.

Some people enjoy fire cider straight, but the spiciness can be overpowering, so it’s best to dilute it when you try it for the first time. Mix it in water, tea, or juice. The flavors combine well with many foods, so you can even incorporate it into your cooking – you might bring some fire cider chutney to you next holiday potluck, or slather up some bratwurst in fire cider honey mustard, for example. Mixologists may want to add it to their shelf of potions, so they can surprise their friends with a fire cider Hot Toddy or other fire cider-infused cocktails on a cold winter’s night. Or, start your day with it – one swig and you’ll be wide awake with blood flowing in your veins and nature’s best cold remedy emanating from your mouth like dragon’s breath.

Note: If your symptoms don’t improve or worsen, see a doctor. And remember, some herbs can cause adverse reactions, especially in larger doses. Never use herbs that you are unfamiliar with without first consulting a qualified herbalist or medical professional. Children, pregnant and nursing women, and individuals taking prescription medication should consult with a health professional before taking any herbal product.

Popular
The Potential of Propolis for BeekeepersHolly Regan
7 Smokable Plants You Can Grow That Aren’t MarijuanaBrian Barth
Yes, the Government Really Does Stash Billions of Pounds of Cheese in...Emily Baron Cadloff
How to (Actually) Get Rid of Fruit FliesEmily Baron Cadloff
What to Do With an Abundance of PeppersShelby Vittek
Explore Modern Farmer
Related
Food & Drink, Health
The Potential of Propolis for BeekeepersHolly Regan
Plants
Why You Should Grow Almonds and Thyme TogetherShea Swenson
Food & Drink, MTMF
Meet the Former Chefs Growing Restaurant-Driven Produce in Suburban AlbanyKerri Sullivan
Food & Drink
‘Tis the Season For GleaningCrystal Sands
wpDiscuz
We use cookies on our website to give you the most relevant experience by remembering your preferences and repeat visits. By clicking “Accept”, you consent to the use of ALL the cookies.
Cookie settings ACCEPT
Privacy & Cookies Policy