Indecisive Cow Gives Birth To Triplets, Each Of Which Is A Different Breed

This indecisive cow gave birth to triplets -- each of which is a different breed. 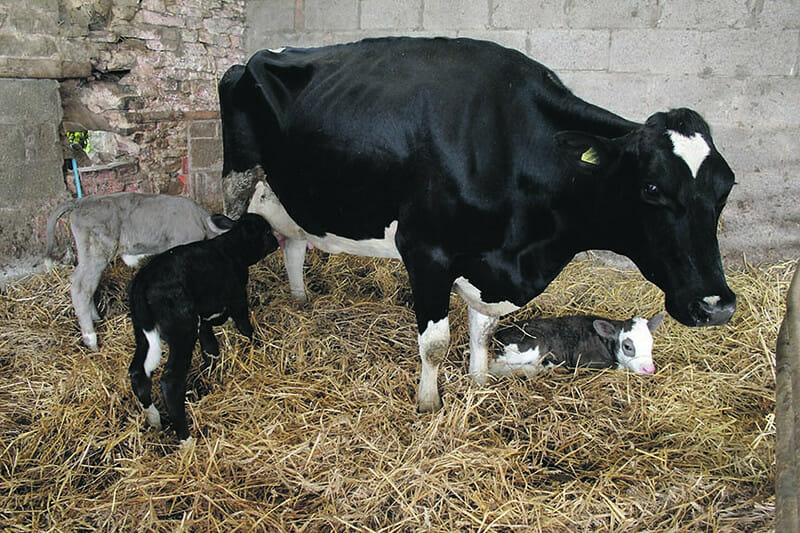 Sometimes it can be hard to make up your mind. Do you want a sandwich or a salad for lunch today? Tough decision: both have their ups and downs. But one cow from Lincolnshire, in eastern England, has taken indecision to a new and impressive level by giving birth to triplets, each of which, says its farmer, is a different breed.

Multiple births are rare enough in cows as it is; it varies by breed of cow, but generally the likelihood of a cow having twins is somewhere between 1 and 7%, not much more than the likelihood in humans (around 3 to 4%). Triplets are exponentially more rare, but not unheard of in breeds like the holstein-friesian (the classic black-and-white dairy cow). Where cows differ substantially from humans is that in artificially inseminating breeding cows, farmers often use sperm from multiple breeds. That allows for fraternal twins, in which two sperm cells meet two eggs, that are of totally different breeds.

Both different-breed twins and triplets are very rare, but familiar to high-turnaround cattle breeders. Different-breed triplets, though, is something we certainly have never seen before. The Lincolnshire cow, says its farmer, Peter Combridge, gave birth to three calves: one limousin, one simmental, and one charolais. All are healthy, even if they don’t look much like each other. Check out Farmers Weekly for more.