World champion J.B. Mauney is taking the bull by the horns. 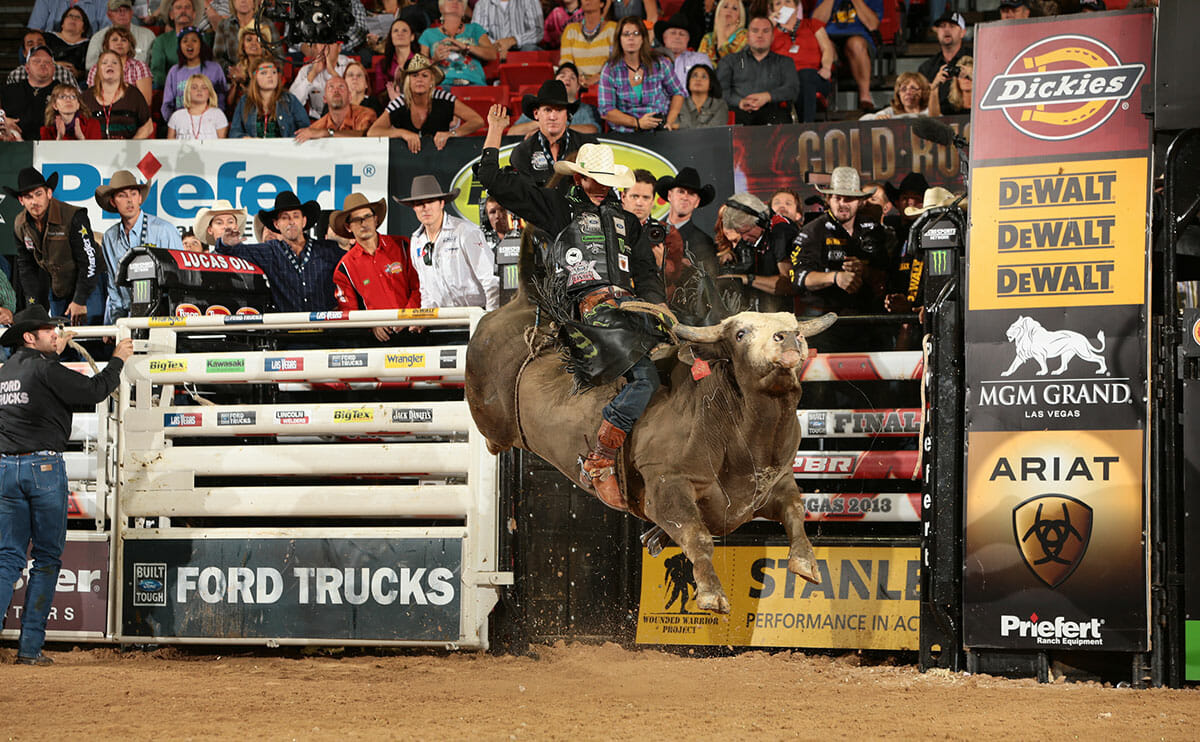 Mauney has just come off a historic season in the Professional Bull Riders circuit, becoming the 2013 World Champion after an epic season of ups and downs. We talked to the bull rider about how he learned to ride bulls, what it’s like to be up on one and his experience riding Bushwhacker, the so-called “unrideable” bull.

MF: Last year was a major year for you.

JB: Last year it couldn’t have went any better. It went perfect. I was riding everything I was getting on and winning a bunch, and it rolled on over to to the finals and ended up winning the world.

MF: So take me back: When did you ride your first bull?

MF: And is there a way to describe it for somebody who has never ridden a bull? What’s that experience like? Especially for the first time.

JB: The first time – I mean there ain’t no telling what’s going to happen. You’re nervous, your butterflies are going, everything that could happen starts running through your head. Once you get in there, all the butterflies go away. I mean when you bull ride it’s the greatest adrenaline rush you’ve ever had in your life. It’s like you’re 10 feet tall.

When you bull ride it’s the greatest adrenaline rush you’ve ever had in your life. It’s like you’re 10 feet tall.

MF: How do you deal with the fact that in most of the cases you’re going to get thrown off the bull, and you’re probably going to get banged up at least a little bit?

JB: Oh yeah, that’s all part of it I guess, you know. My dad told me when he rodeo’d – he steer wrestled – from the time I was old enough to really comprehend what was going on, he said, ‘Hey, all you’re doing is really tearing your body up.’ He told me right off the bat that was all I was doing. Up until I was 25 I thought, ‘Man he’s crazy.’ Once I turned 25, it all started sliding a little south.

MF: How many times have you been injured?

JB: Oh man, that list is way longer than my accomplishments. We’ve got a bunch of horses here and we do a bunch of roping and stuff, and after I ride horses all day I’m really sore. I look like I’m about 80 years old walking around.

I should have listened a little better to some of the doctor’s advices on getting things fixed and what to do, but I didn’t when I was young, because it didn’t hurt me when I was young. Now I’m paying for it. I’m 27 years old and I feel like I’m 68 years old.

MF: How do you train for bull riding besides just riding a lot of bulls? Do you go to the gym?

JB: I just ride bulls. Some guys go to the gym, they work out all of the time, constantly doing stuff. But I figure we’ve got horses, I catch cows, we rope ”“ there’s enough stuff that I’m doing during the week where I’m at home to keep me in shape. And I don’t need to go to the gym. But I think that riding horses, besides getting on bulls, is the best thing you can do for riding bulls, because it’s an animal; you’ve still got to use your legs to ride horses and everything like that. So we ride a bunch of horses around here and do a bunch of roping and stuff.

JB: Well your hands, you hold on with, but they don’t really have a whole lot of purpose. As long as you can shut your hand and hold on, that’s all it’s really there for. And you know, you’ve got rosin to put on your rope to make it sticky. I make my own rosin – I mix up a concoction where it holds on to my hand too. You don’t have to be able to hold on very much.

The main thing about bull riding – the biggest part of it that helps out the most – is above the shoulders, in the head. It’s the middle game.

Your legs are real important ”“ you ride bulls on your legs.

MF: Can we talk about Bushwhacker? Apparently he was called the unrideable bull, and you rode him?

JB: Yeah, when I first brought him around, they did the same old hype they do when they bring every other bull around. They talked him up how he’s just the best thing going and all of this stuff. Well me, I’m real bad in that not only do I ride good, but I want to prove that there’s not a bull out there that I can’t ride. And I want to ride every one of them, so especially when they say he can’t be rode, he’s unrideable, that’s the one I want. I want to ride him because I want to prove to myself that I can ride him.

JB: I think the main difference in all the bulls is that most good bulls they come around and eventually you figure them out. You know, it don’t take long.

MF: But Bushwhacker was harder to figure out for you guys?

JB: Yeah, the thing that makes him different is that he uses his head more than most bulls. He don’t have a set pattern. When that gate opens, he’s gonna do whatever it takes to throw you off. I’ve been on him, now I’ve been on him 13 times, and he’s never done the same thing twice.

Back in 2003 approximately my son and I were fishing on a floating pier in Mathis, Texas. While there these 2 young lads, I believe they were brothers came over to us and chatted. The both were in their early teens and told us they were training for being professional bull riders. Was one of them J.B.?