‘Happiness is a Warm Puppy’: Early Modern Medicinal Use of Dogs

A look back at early modern medicine, when everything from dog's brains to dog excrement was considered medicine. 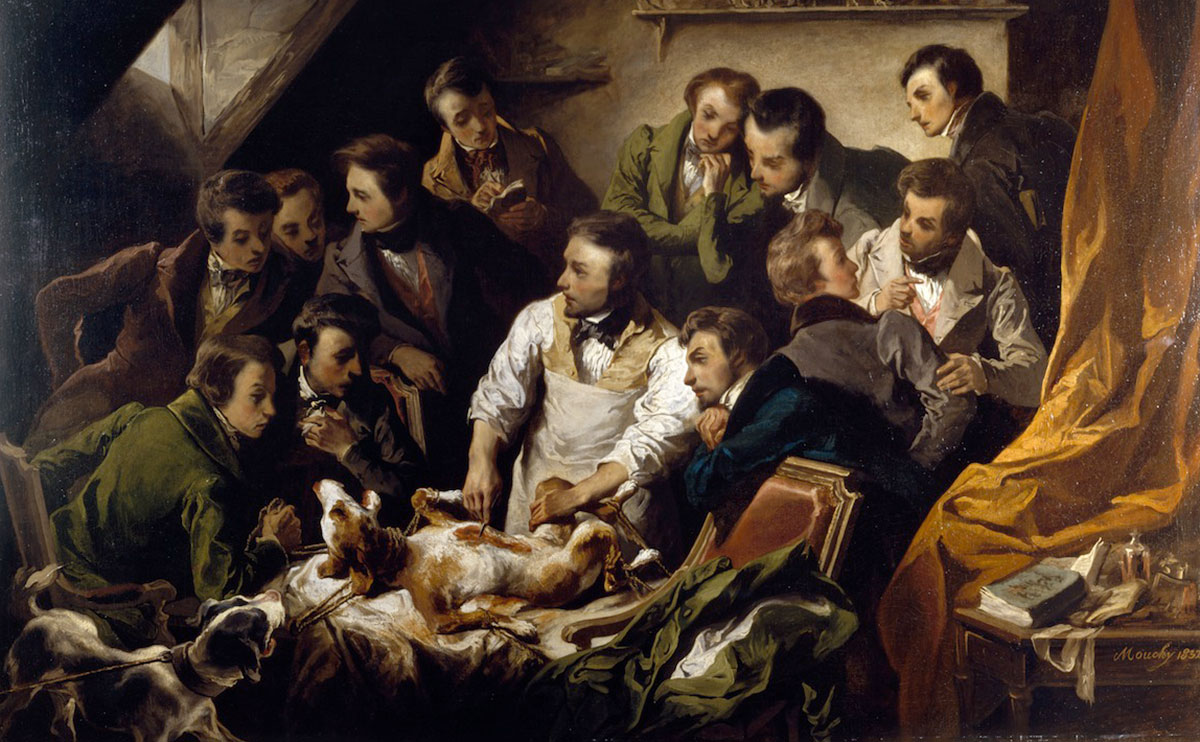 Despite enjoying the status of “man’s best friend” for millennia, dogs have also had to endure some of man’s cruelest experiments. From medieval dog-baiting to early modern vivisection, dogs have been used as entertainment, to further scientific knowledge and even as a medicinal ingredient.

Yes, that’s right. Fido’s various body parts and excretions were thought to have profound effects on the human body – effects beyond melting hearts with a wide-eyed gaze and happy grin.

Dogs as a medicinal ingredient seems quite strange; the animal was viewed in early modern times – just as is it now – as either having utility (i.e., hunting or shepherding) or as a pet. Some of these early modern treatments go back to ancient Greece and Rome and were attributed to writers like Hippocrates and Pliny, others to medieval Persian writers like al-Razi, while yet others were early modern creations.

It was thought that all matter was made up of a combination of blood, black bile, yellow bile and phlegm. The proper balance of these humours meant good health. Dogs were considered to be naturally choleric – that is, heavy on the yellow bile – and having the qualities of hotness and dryness. 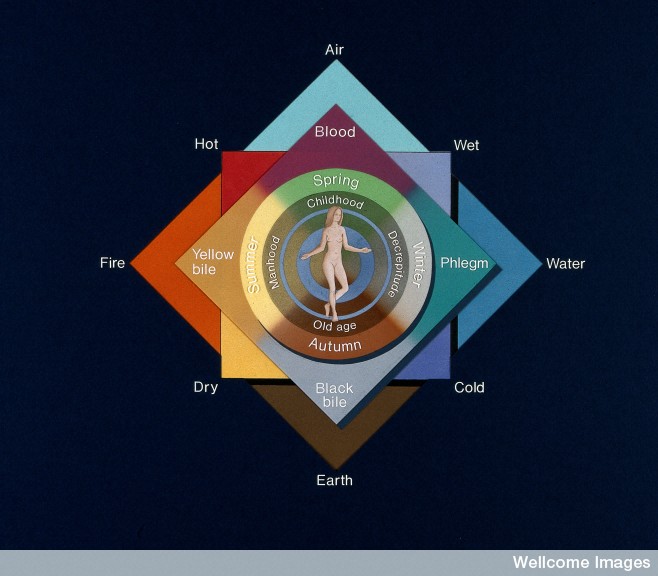 From this, medical practitioners either subscribed to a system of “opposites curing opposites” or “like curing like.” In the first, dogs would be used to balance out those who were primarily phlegmatic and thus cold and moist. While in the latter system, dogs were used to treat diseases and people that were deemed choleric. Sometimes, the use of dogs defied even the strained logic of early modern medicine. It could only be called magic.

In 1562, Girolamo Ruscelli, an Italian physician, recommended a combination of 2 ounces of ‘dogges turdes,’ wine, sugar and olive leaves, amongst other things, boiled and turned into an ointment to ‘heal an excrescens or growing up of the fleshe within the yarde of a man.’

Once upon a time, the stuff that left your dog’s derriere made it to the medicine cabinet. Dog’s poop was a surprisingly popular medical ingredient for everything from growths on genitalia to a sore throat. In 1562, Girolamo Ruscelli, an Italian physician, recommended a combination of 2 ounces of “dogges turdes,” wine, sugar and olive leaves, amongst other things, boiled and turned into an ointment to “heal an excrescens or growing up of the fleshe within the yarde of a man.” While for a “squinsy” (likely tonsillitis) or sore throat, both Salvator Winter (1649) and the anonymous author of The Queen’s Closet Opened (1679) recommended specifically “white dogs-turd” in honey and applied to the throat. Similarly, Thomas Chaloner’s 1584 medical treatise recommended slathering one’s itchy or leprous skin with a combination of dog’s urine and saltpeter.

Thankfully, not all medical practitioners were so thrilled at the use of excrementious matters. In 1696, an English physician named Everard Maynwaringe labeled it a “loathsome nasty Physick,” stating that only “they that know no better, must make use of such.”

The fat, or grease, of dog was thought to be an excellent treatment for gout. The “Pharmacopoeia Londinensis”, written by London’s Royal College of Physicians, and illegally translated into English by Nicolas Culpeper, wrote that dog’s fat was “hotter than any other grease” and was to be used inwardly to cure wounds, ulcers, consumptions and even deafness.

A dog’s brain and head were even used in a variety of ways. Robert Lovell’s “Panzooryktologia” (1661) noted that the brain of dog would heal broken bones within 14 days if it were held to the limb with linen and wool. Dogs’ heads (it is unknown if this included the brain as well) were burnt and the ashes were used internally and externally. Externally applied in conjunction with various herbs and herb oils, it was thought to cure ulcers and swollen testes, uterine pain and even sciatica.

Not all uses of dog involved recipes as such. The more magically-inclined uses included dog’s ear wax in wine (to cause drunkenness), the longest tooth of a black dog (to cure fevers), and the froth of a rabies-infected dog (to cure or prevent hydrophobia). Dog’s genitals were worn as amulets as an aphrodisiac and its vomit applied to the belly to encourage urination. 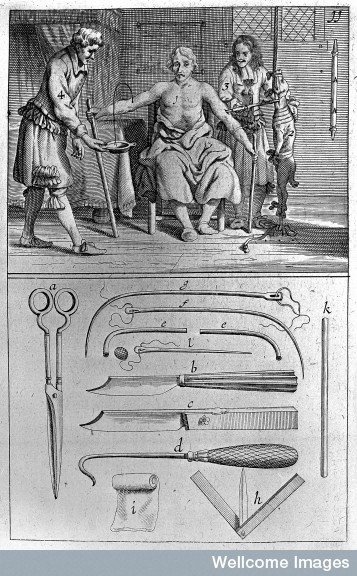 Not even puppies were immune from these medical monstrosities. The “Pharmacopeoia” states specifically that the brain of a newborn puppy – likely applied to the eyes with linen – would cure glaucoma in a week. It even gives the recipe for a wound cure called “Balsamum Catellorum” that requires as its main ingredient a puppy “drowned in Rhenish or Sherry Wine, then beaten in a Morter” with various other ingredients, boiled and strained. The resulting balm would be topically applied to the affected area.

Perhaps the most famous medical recipe that used puppies was popularized by the 16th century French surgeon Ambroise Paré. Paré was no crazy quack; amongst other things, he was famous for discovering that gunshot wounds were not poisonous, for developing the use of ligatures in limb amputation and even for postulating that phantom limb pains originated in the mind rather than the limb remnant.

Paré’s account of the balm recipe, given to him an Italian surgeon, is quoted in “The Method of Curing Wounds Made by Gun-shot” as consisting of: “two young whelpes, one pound of earth-wormes, two pounds of the oyle of Lillies, six ounces of the Terebinth of Venice, and one ounce of Aqua-vitae: and in my presence he boiled the whelpes alive in the saide Oyle, until the flesh departed from the bones. Afterward, he tooke the wormes (having before killed and purified them in white wine, to purge themselves of the earth which they have always in their bodies) being so prepared, he boyled them also in the said Oyle till they became dry, this he strained through a Napkin, without any great expressions, that done, he added thereto the Terebinth, and lastly, the Aqua-vitae, and called God to witnesse, that this was his Balme which is used in all wounds made by Gunshot.”

To Paré’s credit, at least, he rejected the internal consumption of human remains, or “mummia,” for medical reasons. Dogs, however, were still fair game.