How Vermont Could Become the Napa Valley of Hard Cider

Like contemporary Johnny Appleseeds, two men are determined to reincarnate the thriving cider industry by repopulating the Northeast with the heirloom apple orchards of yore. 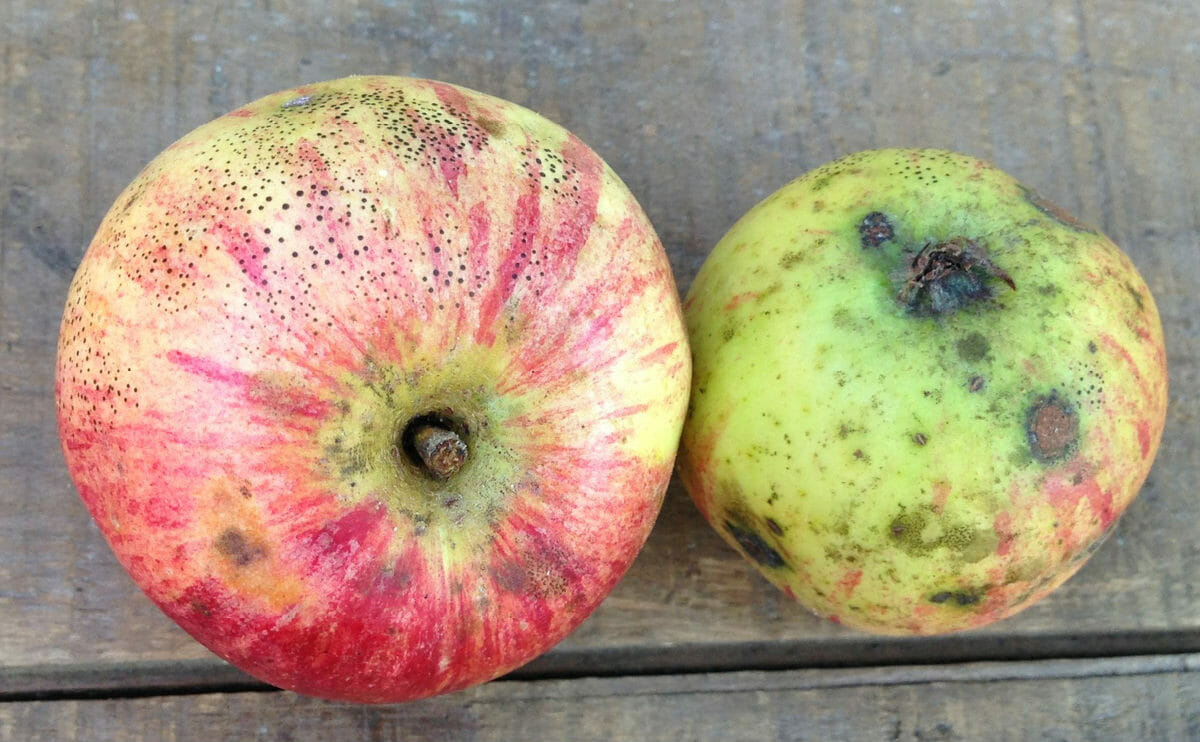 The Shacksbury team loaded up a red Tacoma pickup and headed out into the heart of the Champlain Valley, a former inland sea located between the Adirondacks and the Green Mountains. They parked a half mile away from where the tree stood, a tangle of branches over 40 feet high and 5 feet in diameter, far bigger than your average orchard tree, and heavy with red-green fruit. It took them over an hour to clear a path to and around the tree. Sweating and scratched and bloodied, they laid down their bright blue tarps and, using homemade shakers, jostled one of the largest branches.

With just a few shakes, hundreds of apples dropped onto the tarps like a raucous rain. Davis reached down for one of the apples, small and misshapen, and took a bite. It was so bitter and tart that anyone else would have spit it out.

They’d found one of their first “lost apple” specimens. Inedible, perhaps, but absolutely ideal for making hard cider – a once-thriving industry in the Champlain Valley that, along with the cultivation of the apples it relied on, withered into history.

Until now. Like contemporary Johnny Appleseeds, Davis and Dolginow are determined to reincarnate the cider industry by repopulating the Northeast with these apple orchards of yore.

Now known for its iconic sweet apples (or, as Dolginow calls them, “dessert apples”), the Northeast was once home to a thriving cider industry – both commercial and home-brew – made from what many now call crab apples. Now mostly decorative and food for deer and birds, the small, tart fruit dot the landscape of the Northeast and were in many cases planted by early colonial settlers who brought seeds from Europe, where there was a thriving cider tradition. In colonial times, practically everyone had at least a tree or two in their backyard for home brews, and larger orchards gave way to a thriving commercial cider industry. (There’s a “crab apple” tree perfectly positioned next to my family’s house on Bremen Long Island, Maine, that, until I began writing this article, we always thought of as wild.) As Pete Brown and Bill Bradshaw write in their book “World’s Best Ciders,” “Cider was much easier to make in an untamed land than other drinks, and even when beer arrived, cider remained much cheaper. By 1767, the average Massachusetts resident drank 35 gallons of cider a year – a calculation that includes children.”

But with Prohibition came the swift death of the American hard cider, and cider apples were forsaken for the now-iconic sweeter varieties better suited for apple pies and juice. Cider trees were essentially abandoned and went feral and the memory of the cider tradition has been lost from the collective consciousness.

But that is changing. Cider is now making a comeback akin to craft beer’s micro-brew revolution that began in the ’90s. There are now dozens of high-quality, small-batch craft varieties are cropping up across the United States, concentrated in traditional apple growing climates of the Great Lakes region, the Pacific Northwest, and the Northeast. Along with their bigger industry partners, the cider industry grow by 144 percent in 2012 (though still accounting for only .3 percent of the overall beer market).

This “cider revival” is exciting to Davis and Dolginow, and they want to see it on a larger scale, becoming again the booming industry it once was. Their strategy: excavate the “lost apples” from the now-feral trees, and plant thousands of heirloom cider trees in Vermont’s Champlain Valley.

Their strategy: excavate the ‘lost apples’ from the now-feral trees, and plant thousands of heirloom cider trees in Vermont’s Champlain Valley.

Until a few years ago, neither Davis nor Dolginow had really much liked cider at all, tending instead toward the rich craft beers for which Vermont is so famous. Their friend, Vermont cheese maker Michael Lee of Twig Farm, bottled several home-brews a year from a cast-off cider apple tree in his backyard – a tree that once, they are certain, provided homebrew for the early residents of the farm house in which he now resides. Just a sip of Lee’s stuff and Davis and Dolginow were hooked. They understood that what they had tasted before – national brands like Stella Artois and Cider Jack – were really the Budweisers of hard cider.

“From then on, we started tasting everything we could get our hands on,” says Dolginow.

But the good craft varieties were hard to find. Once the apple industry shifted from the fruit ideal for cider — tart and bitter like the apples Davis tasted that day at Roberts’ Dairy — to those sweet fruits better suited for eating, it was hard to go back. It takes approximately five years for a grafted apple tree to bear fruit, and the cider orchards had been largely replaced or overgrown. Around the same time Prohibition ended, thousands of German immigrants were flooding into the Northeast, shifting the alcoholic zeitgeist toward beer — which happened to be much quicker to produce (it only takes a season to grow hops and barley). The odd cider tree was left to seed in the backyard.

It’s these abandoned heirloom varieties, these lost apples, that Davis and Dolginow are convinced make the absolute best cider — a different beverage entirely than the commercial ciders available in most American markets today.

They took to the state’s back roads, scouring the fields and hillsides of the Champlain Valley in search of these “lost apples.” They knocked on doors, pulled over to the sides of the road, scrambled over fences and hiked up hillsides toward whatever trees they saw languishing on the sidelines, hidden in overgrowth, forgotten but still bearing fruit. Based on taste of the apples, the apparent health of the tree and sheer trial and error, they began collecting bushels and bushels of apples for test batches of cider. They were a welcome spectacle in the Vermont autumn-scape — milk trucks and mailmen and other passers-by would pull over to chat and inquire as to what, exactly, they were doing up in those crab apple trees. Land owners “were really friendly, and liked the idea of their trees going to use,” says Dolginow. “People love to see others out and about harvesting fruit. It’s that kind of age old thing — it fits the landscape.”

The Shacksbury team picked from over 50 trees, then crushed, pressed, bottled and fermented each apple variety in their test kitchen, tracking the tree location, the tree’s health, and the characteristics of each raw apple through to the finished cider product — with some incredible results.

“But if we want to scale up our product,” explains Dolginow, “we can’t just be driving our pickup truck around Vermont.” Hence Shacksbury’s vision of a Lost Apple Orchard, a grove of salvaged heirloom cider varieties for contemporary large-scale production.

This spring, they will revisit the trees to collect root stock and, in partnership with a local nursery, will graft 2,500 trees to plant at their partner, Sunrise Orchards, in Shoreham, Vermont, the world’s first lost apple orchard. Their test batches pointed them to five to 10 trees they want to work with. These trees will start bearing fruit in approximately 2017, and will be ready for pressing, fermenting and bottling.

But Davis and Dolginow, newly-minted cider freaks and staunch entrepreneurs, weren’t interested in waiting that long to launch a product. So in the meantime, they’ve partnered with orchards in Spain and England to bottle and keg two high-quality craft cider varieties that, just this month, are ready for sale. “We’ll start by getting them into restaurants and stores in Vermont,” says Dolginow, “but eventually we want to launch a national product.” In just a few weeks, Shacksbury will plant 2,500 young English Cider trees at Sunrise Orchards (grafted from English trees, and distinct from the heirloom apples the duo is collecting) — which will be ready for cider production in 2016.

Between the European production, the newly-planted English cider varieties, and the lost apple orchards, Shacksbury — a curious mix of nostalgia and commercialism, revival and innovation — hopes to move toward the forefront of the cider industry in the United States, and to contribute to the overall shift in quality and availability of American cider. To them, the Champlain Valley, with its tradition, lore and ideal apple-growing climate, could easily be transformed again into the Napa Valley of Hard Cider — and, by planting 2,500 trees per year for the next several years, that’s precisely Shacksbury’s plan.

And the more craft cider companies the better. “Like the craft beer and local cheese movements,” says Dolginow, “increased variety and availability is a good thing for everyone.”