Why Farmers and Knitters Are Fixated on Icelandic Sheep - Modern Farmer
Animals, Plants

Why Farmers and Knitters Are Fixated on Icelandic Sheep

There are many reasons why growing numbers - primarily farmers and knitters - are fixated on the Icelandic sheep. The breed, with fine-grained meat and a wooly coat that is both light-as-air and rugged, has retained one of the purest bloodlines in the agricultural world and carries a romantic and wild history. 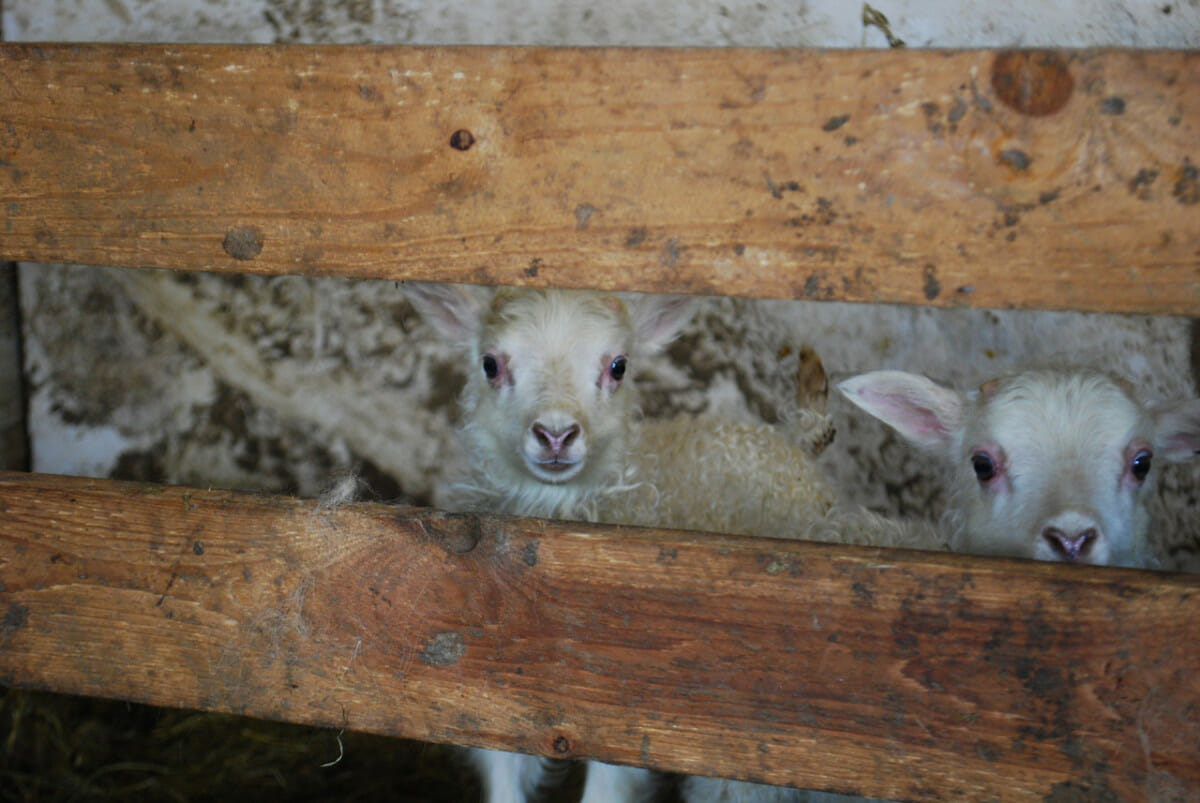 After all, life in Endiang, Alberta, the heart of coyote country, isn’t easy for roly-poly animals with short legs and low IQ. So when he and his wife were stocking their farm four years ago, they jumped on a small classified ad selling a small flock of Icelandic sheep.

“They’re not an ‘improved breed,’ so you’re dealing with the same sheep that were running around Iceland during the Viking times. They’re more like wild mountain sheep,” says Somerville, acting president of Iceland Sheep Breeders of North America. “I’ve watched these sheep take on dogs. I’m pretty sure they’d take on a coyote.”

But they’re not feral. In fact, 28-year-old Somerville is certain they’re smarter than standard commercial sheep, and he trusts themÂ­; he sometimes sits in the middle of their pen and holds his seven-month-old son while the sheep snuffle around their faces.

There are many reasons why growing numbers – primarily farmers and knitters – are fixated on the Icelandic sheep. The breed, with fine-grained meat and a wooly coat that is both light-as-air and rugged, has retained one of the purest bloodlines in the agricultural world and carries a romantic and wild history.

Without sheep milk, meat and hides, life for her Viking ancestors would have been impossible, says RagnheiÁ°ur EirÁ­ksdÁ³ttir, a Reykjavik-based knitting instructor and former nurse. “They were essential to surviving here,” she says. Three years ago she started Knitting Iceland, a tour company that primarily caters to American and Canadian knitters.

“In my classes I talk a lot about the sheep, our culture, farmers and our heritage,” she says. “If you just present someone with a ball of yarn it doesn’t have the same impact as that story, the fact that the whole heritage of a nation follows that ball of yarn.”

The Icelandic sheep is an ancient North European breed, slightly smaller than modern varieties, whose double-layered coat is uniquely suited to cold and wet conditions, says EirÁ­ksdÁ³ttir. In Iceland they are raised primarily for their meat, but the wool is a valuable byproduct. The inner layer, or thel, is insulating, superlight and very airy, while the outer layer, or tog, is long, strong and water repellent. Carded together, these two layers make lopi, versatile wool used to knit lopapeysa, the distinctive traditional Icelandic sweater of concentric rings.

These days, says EirÁ­ksdÁ³ttir, it is trendy for tourists to bring home an Iceland sweater as a souvenir, which means the humble lopapeysa is quickly becoming a status symbol.

“Over here everybody wears them: babies, old guys at the harbour, hipsters wearing lopi sweaters instead of hoodies,” she says, laughing.

At summer’s apex, before the annual slaughter, the number of sheep in Iceland outnumbers the human population three to one, at approximately 500,000. Allowed to roam wild in the summer, they are ubiquitous on the island’s barren, rocky landscape, sometimes scaling giant mountains in search of edible moss and herbs, where they can only be seen as tiny white, black and brown specks thousands of feet in the air.

Wool from the spring shearing is coarse and generally used to make carpets, while prized lopi wool comes from the autumn shearing. The country only has one industrial spinning mill, Ástex, which is co-owned by a cooperative comprised of 1,800 sheep farmers. From about 1,000 tonnes of raw pelts the mill produces about 454 tonnes of handknitting and felting wool – about 60 per cent is sold domestically.

When Chicago knitter and fibre artist Noelle Sharp was accepted into a three-month residency in Iceland, she wasn’t expecting she’d be staying on a sheep farm in the middle of nowhere. But that’s where she first discovered the joys of knitting with lopi. 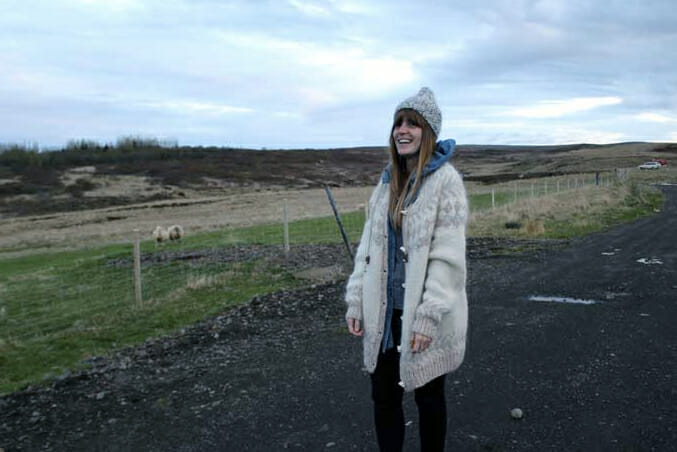 “It’s got these great fibres that are kind of spindly. I work with unspun lopi, and it took me a couple of weeks to get used to it because it was like knitting with air,” says Sharp. “Plus, it has this self-cleaning quality to it, so I was told you’re only supposed to wash an Icelandic sweater once a year. I had never heard of that before.”

Back in Illinois, Sharp says lopi is the only fibre she uses that isn’t made in America. While it can be hard to find here – she orders hers directly from Iceland – she says it is gaining cult-like popularity in knitting circles. “As far as fashion goes, this year Iceland is huge,” says Sharp, who sells her work online “Sometimes when I’m knitting in public I’ll have knitters come up to me and ask, ‘Is that lopi and where did you get it?’”

According to Hulda HÁ¡konardÁ³ttir, Ástex’s marketing manager, sales of lopi to North America make up approximately 20 per cent of their export market and sales have grown 30 per cent since 2009. Part of the growth, she says, is that is becoming increasingly difficult for knitters to find pure knitting wool instead of rayon and acrylic blends, which are generally cheaper.

But Sharp says there’s more to it, that there is an authenticity to the wool, a sense of connection to agriculture and to the sheep inherent in the material. “In Iceland I met this weaver who teaches weaving and knitting. Because of the shortage of trees, older people would wrap their yarn around sheep bones and use them as bobbins. She had a whole bowl of bones with yarn wrapped around them. It was very Viking,” says Sharp.

And then, she says, there’s the smell. “I get all kinds of wool into my studio, and sometimes it smells like an amazing Icelandic sheep, really warm and earthy,” she says. “Even though they have bright colors you just have this sense that they’re not polluting it with dyes and whatnot. You really have to smell it. It smells like a sheep. Other wool smells like nothing.”

Responding to demand for homegrown lopi has been challenging, says Somerville, particularly since they’re “not going to become millionaires selling wool and fleece.” Still, he fields regular calls from other farmers who want to learn more about the breed, and there are currently 300 farmers in North America who are registered owners of Icelandic sheep. After all, as he says: “Sometimes you just want something that’s more self-sufficient.”

I am interested in going to Iceland to work with these sheep farmers. Could I get in touch with any of the people in this article?

1
Reply
Iceland Driving: What You Need to Know For Safety | Camping Iceland

[…] sheep also get frightened by the sound of a quickly approaching motor, and when they get alarmed, they […]

I love Icelandic Sheep, meat, & wool!! If you raise it, who do you sell the wool to?? How do you separate it and wash it for shipping?

very interesting and sounds like a sustainable alternative and passion, a journey to learn sounds important as the understanding would gain much value from its origins. Would love to be invited