Ever wondered where those stern warnings about "unauthorized use of milk cases" being illegal come from? Us too. 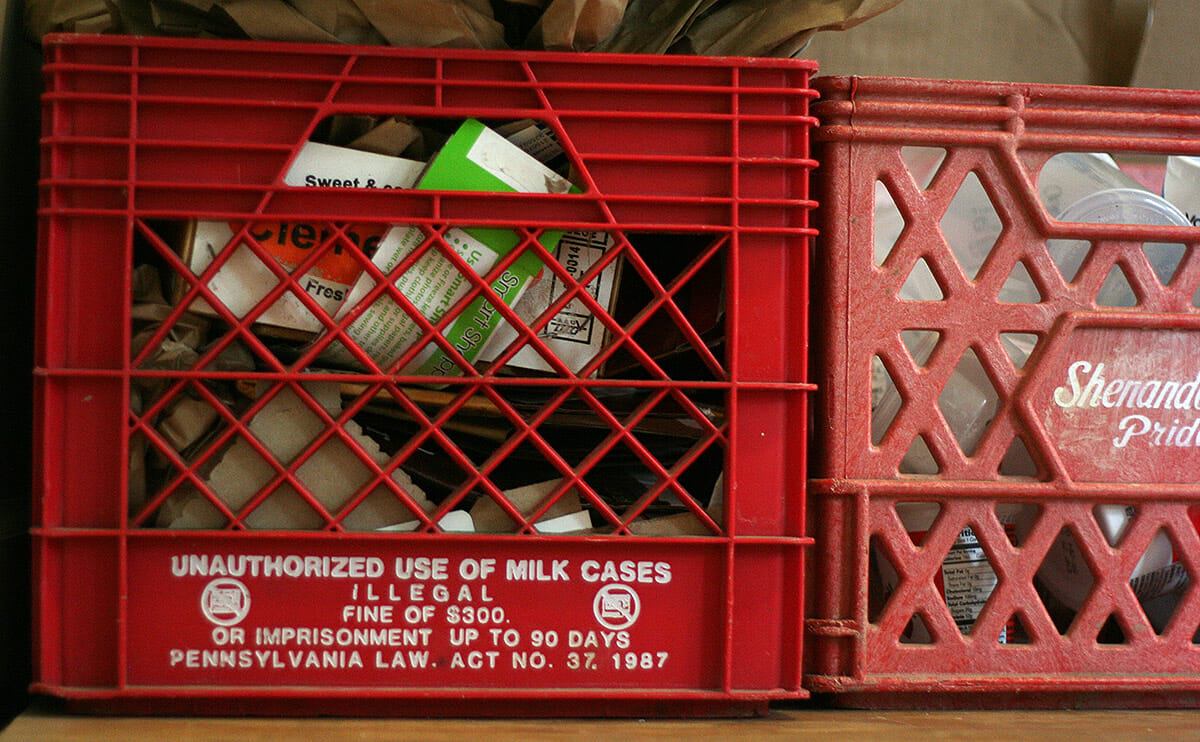 For the past five or so years, I’ve had a three-bin system going in my mudroom to separate my recyclables. There’s one for #1 and #2 plastics, one for #3 and up plastics and one for paper and cardboard, as necessitated by the convoluted and piecemeal recycling program where I live. Three red milk crates do the trick perfectly – conveniently sized, movable, stackable and indestructible.

I have no idea where, when or how I acquired them. Like the mismatched plates and glasses in my cupboard, they’re a product of household agglomeration over a decade of post-college moving, roommate-swapping, getting married, and the other assorted vagaries of domestic living. Regardless, these milk crates make for great recycling bins, and so it was with shock and amusement that I would occasionally stop to read the stern warning printed on the side:

It’s true. Pennsylvania code does indeed criminalize unauthorized “use for any purpose” of a milk crate stamped with the name of another company (as mine are). In Virginia, where I live, mere possession of someone else’s milk crate isn’t itself a criminal act, although it is a Class 4 misdemeanor to “buy, sell or dispose of” a milk crate that belongs to someone else. Similar laws on the books in many other states beg the question: really?

Theft of milk crates is an issue taken very, very seriously by the dairy industry — dairy companies lose an estimated $80 million per year from stolen crates.

Theft of milk crates, as it turns out, is an issue taken very, very seriously by the dairy industry. The International Dairy Foods Association (IDFA), which runs a whole website devoted to public education on the issues of milk crate misuse, estimates that dairy companies lose 20 million milk crates a year to theft. At about $4 per crate, that’s an $80 million loss per year. That represents just a fraction of a percent of gross national fluid milk sales – in excess of $20 billion in 2012 – but dairy profit margins aren’t huge, and $80 million is $80 million.

“The big problem is semi-organized theft for the purpose of grinding them up and selling them,” says Clay Detlefsen, vice-president and counsel for the IDFA. “It’s pretty unsettling when you see how organized these criminal enterprises can get.”

In 2010, The Wall Street Journal reported on a Baltimore-area crime ring that stole millions of dollars of plastic for resale to recycling companies. Large-scale theft typically occurs at the point of exchange – often, loading areas behind stores and restaurants where empty crates have been stacked for pickup.

In addition to the dairy industry, bakeries, soda companies and other businesses that use reusable plastic containers experience significant theft. Milk crates are made of petroleum-derived high-density polyethylene, and their price rises and falls with the price of oil. Incentive to steal milk crates rises and falls in sync, and the various industries affected have worked together to fix the problem.

In Baltimore, a coalition of beverage companies and bakeries hired a private investigator to assist law enforcement in pursing organized milk crate rustling, according to the Wall Street Journal article. The Maryland state legislature has also responded, passing two bills that make it harder to sell stolen milk crates to plastics recyclers and beef up penalties for first-time misuse, trafficking or destruction of milk crates to up to 1 year in prison or a fine of up to $1,000.

“It’s an enormously serious problem,” says Detlefsen. “We haven’t been able to figure out a good or effective way to eliminate [theft].”

Scofflaws like me, who use a few crates for organizational purposes, are in the distinct minority of milk crate abusers. The IDFA attributes just 5 percent of crate loss to “personal use,” but that doesn’t mean we get a free pass. Detlefsen says these should be returned to whatever dairy company has its name stamped on it.

The industry advances an environmental argument to discourage personal misuse of its milk crates. Every time a milk crate gets siphoned out of the milk supply chain, a brand new milk crate replaces it. That milk crate on the back of your bicycle, the one that you fill with goodies from the farmers market? That probably cost some dairy about $4 to replace, and it cost all of humanity the price of molding another four pounds of petroleum-derived plastic into a milk crate.

There’s probably a doctoral dissertation waiting to be written about the life-cycle costs of a milk crate being put to personal misuse. It would be interesting to compare, say, the environmental cost of misusing a milk crate for hauling farmers market goodies against that of using plastic bags for the same purpose over a long period (some individual crates, Detlefsen says, have been in continuous use since the 1970s).

Regardless, though, if you have a milk crate marked with another company’s name, it belongs to them. As we all hopefully remember from kindergarten, we’re not supposed to take things that don’t belong to us.

Fortunately, there are all sorts options out there for buying new milk crates (slightly marked up from the wholesale $4 price quoted by the dairy industry), allowing us to put their inherent usefulness to good personal use in a fully sanctioned, above-board, morally straightforward way.

As I sit here at my keyboard, my three milk crates are still there in the mudroom, answering the call of duty to organize and contain my recyclables. Investigating that grim and dour warning printed on the side has been a fun little reporting exercise, but it’s come at something of a personal cost. I’ve outed myself, and, while I doubt the authorities will kick my door in to restore law and order, it would be fairly hypocritical to hang on to my milk crates.

When my check from Modern Farmer arrives, I guess I’ll be spending part of it on three legal milk crates, and returning (once I figure out how that works) my ill-gotten ones to Pennsylvania. At least now I can write that stuff off – business expenses.

I feel kinda bad now.. was cleaning out my parents garden shed and I found the perfect milk crate ( yes it has “property of written in the side”!) but with my cushion on top it’s a perfect height for my feet to rest on while sitting in my chair!!! And I just started a dialogue with my children on how useful milk crates were in the 80’s for all those albums we had ( remember ?) and seats and packing and storage .. in your first apt when you really had no furniture! I did not know honestly that… Read more »

If these plastic milk crates are so important, How come you see them in the dumpster along with the garbage?

They could charge a deposit on them like they do in many other countries. Then people would go out of their way to find and return stray crates.

So, let us know the best way I can return my crates (almost all of which came out of dumpsters). It would be great if there would be some industry clearinghouse.

Why not put a deposit on them, a $4 dollar deposit that the store they are delivered to pays, and then when they are returned then they get that money back, and if they are not returned then the company has the dollars to replace the milk crate.

Great idea from Craig and E Todd!! (Putting a deposit fee on them) …. Like the days of returnable glass soda bottles that had a deposit on them, encouraging consumers to return the bottles and get some cash in the bargain! (Yeah I know a few states have bottle bills, but most of them don’t). Anyway, I see milk crates everywhere, and I have a very hard time believing that the dairy industry (and the International Dairy Foods Association in particular) are really that serious about coming up with a valid solution. They’ve had decades to think about this. In… Read more »

What a cool article! I have a tiny creamery on our family farm and am missing upwards of 40 crates (a significant portion of the total that I own) and this article popped up when I was researching how best to permanently label them with my creamery name “Moreda Family Farms” to help keep them from going missing. I definitely paid more than $4 a crate for mine, (closer to $10 each) so I am also now curious where I get them at the lesser price haha. Thanks for the cute story and the new knowledge!!

I’m truly sorry, looking around seeing that I have a good amount of milk crates, and some of them are very old and passdown from my father. I ask my Google Home, about this subject. I digress will do the right thing get crates back to their owners.If you not part of the solution,then…. (you know the rest)

Easy to check out, easy to read…heck I put to leave a commment!

Decades ago, I worked at a summer camp in an impoverished neighborhood. I remember sitting on these and seeing the bottoms cut out for makeshift basketball goals.

Related
MTMF
The Birth of Farm-to-Table Cooking on the Swedish Island of GotlandJacob Dean
Lifestyle
The Best Holiday Gifts Come Straight From the FarmEmily Baron Cadloff
Lifestyle
Why Are Barns Painted Red?Thomas Durant Visser
Lifestyle
5 Great Shows About Farming and RanchingEmily Baron Cadloff
wpDiscuz
We use cookies on our website to give you the most relevant experience by remembering your preferences and repeat visits. By clicking “Accept”, you consent to the use of ALL the cookies.
Cookie settings ACCEPT
Privacy & Cookies Policy