DIY Misting System for Your Greenhouse, Barn, or Patio Party

This system costs under 100 buck and can help cool down a garden or a cookout. 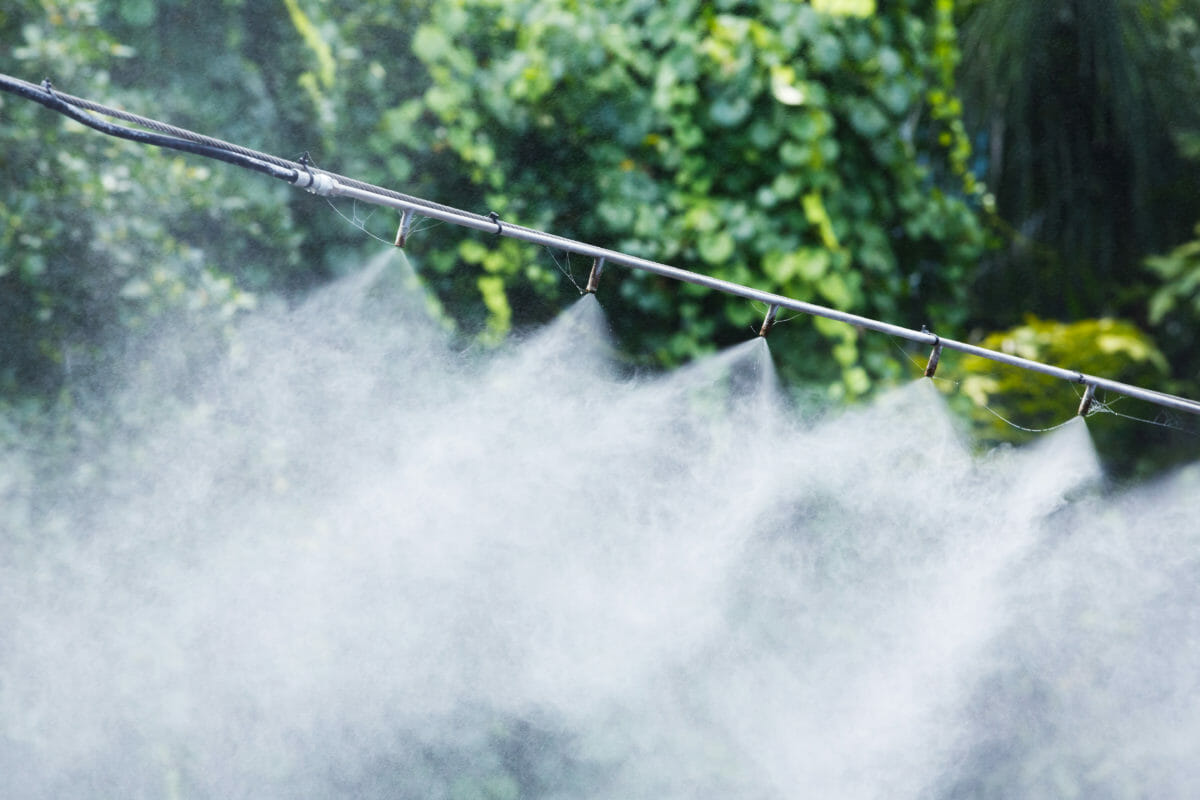 This step-by-step guide to building your own misting system can be adapted to most any space you're looking to cool off, be it a garden, a barn, or a backyard.
Photography By 7th Son Studio / shutterstock.com
Share
Tweet
Pin
Email
811 Shares

With parts available from your local irrigation supplier or home improvement store, you can install a misting system on a deck or patio in a couple hours, all for around $50 to $100. Doing so involves little more than drip irrigation tubing and misting nozzles – small plastic or metal devices that turn water into cool clouds of moist air. It’s simple but ingenious technology, and quite sustainable; unlike cooling off in a sprinkler, misters use a miniscule amount of water.

One caveat is that you need something that hangs just above head height to mount the tubing to. A pergola, gazebo, fence, edge of a roof, or even low-hanging tree branches will do. To create a cooling station for summer parties, erect a pop-up canopy tent and mount the tubing to the frame.

It’s simple, ingenious and sustainable: unlike a sprinkler, misters use a miniscule amount of water.

Misting nozzles, sometimes referred to as foggers, also have agricultural applications – creating a humid environment in greenhouses, for example, which tropical plants adore, or keeping livestock cool in hot weather. Aeroponic horticulture also employs misting nozzles. However, you plan to use your misting system, here are the basic steps to DIY your own:

The easiest way to supply water to misting nozzles is with the flexible plastic tubing used for drip irrigation (½-inch diameter tubing is best). The first step is to connect this tubing to a water spigot, which requires two components:

The drip tubing adapter will have an open un-threaded end. Push one end of the plastic tubing into this end, wiggling it back and forth a bit so it slides in an inch or so. This is known as a compression fitting, as the tight fit forms a seal, preventing leaks.

Seal off the open end (or ends) of the tubing with figure-eight end clamps.

Note: the shorter the tubing, the higher the water pressure at each misting nozzle, resulting in a finer mist.

There are many misting nozzles on the market to choose from. Here are a few pointers:

This is the easy part. Simply punch holes in the tubing every two to three feet (using a drip tubing punch tool) in the area where mist is desired. Push the nozzles into the holes until you feel a slight “snap” (or screw them in if using threaded nozzles). Turn on the water full blast, kick back, and cool off.

Wish you could have added pictures of each step for us visual learners.

I am looking for the system like this. would you please let me know where is the best place I could buy this system in US?

We have 2 back decks that we want to add misting to. But there is no roof. Can Sisters be installed at waist height or pointed up from the floor?

Hi my name is Vanessa and I am working on a project in which I would like to use a misting system that doesn’t involve water but a different liquid. Would you happen to know if that is possible?
thank you