The Occupy Movement’s Ongoing Obsession with the Farm

If Monday morning's police raid on the Occupy the Farm encampment in Northern California was supposed to crush morale, it was a failure. 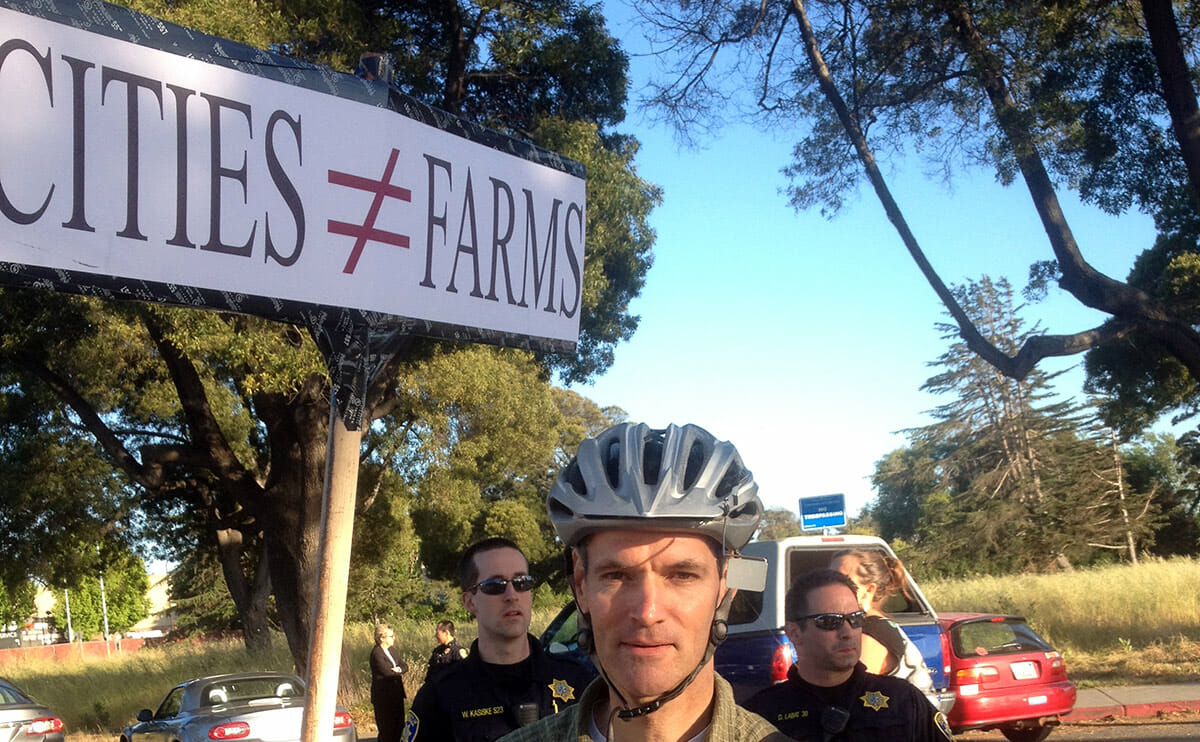 If the Monday morning raid on the Occupy the Farm encampment in Northern California by local police was supposed to crush morale, it was a failure. Instead of dispersing quietly from the university-owned land, protesters have mobilized, igniting debate on how urban open spaces should be developed.

By Monday evening, roughly three dozen protesters, an offshoot of the 2011 Occupy movement, returned to Gill Tract, a contested 12-acre plot of University of California, Berkeley land, armed with shovels and seedlings. A few police officers stood by watching as the renegade farmers cleared the ground for new crops of squash, beans, herbs, eggplant, and tomatoes. Albany Chief of Police Margo Bennett shook her head wearily.

“Obviously, we’re disappointed that the protesters continue to encroach on university property,” she said, referring to the larger parcel of land that flanks Monroe Street and San Pablo Avenue in Albany, California. Berkeley scientists use its fertile “Class 1” soil to conduct biogenetic research with corn. However, the city of Albany has plans to pave the area for construction of a new shopping center. If that project goes through, a natural foods franchise called Sprouts will commandeer the land that Occupiers are currently planting. Occupiers have been farming the area for a year, despite routine disruptions from law enforcement.

On Monday night, several farmers dangled a banner with the slogan “Sprout Farms, Not Grocery $tores.” Organizer Matthew McHale, who marched with the hundred-or-so other protesters from Albany City Hall to Gill Tract on Saturday, said the university and city should think twice before squandering one of the last pieces of agricultural land in the East Bay. “All this area you see right now is slated to become a parking lot,” he said, waving a hand over the tilled Occupy encampment and the weed-choked field behind it.

Yet there’s also a broader context for Occupy the Farm, in that its organizers use the same tactics as other Take Back the Land movements across the globe. Earlier antecedents like the Landless Workers Movement in Brazil encouraged subsistence farmers to appropriate ”“ and, if necessary, seize ”“ agrarian property from the rural bourgeoisie as a way of forcing land reform. Anti-eviction protesters in Cape Town, South Africa used the same ideology to protest evictions and water cut-offs after apartheid, which later inspired a Take Back the Land movement in the Umoja neighborhood of Miami, Florida ”“ an area pock-marked with empty foreclosed homes and a swelling homeless population.

During the raid, four protesters were arrested for misdemeanors, but most of them cleared the area peacefully, said organizer Effie Rawlings. “We were just getting our bird netting and our watering system,” she added, explaining that this iteration of the Occupy movement has a different tenor than its Wall Street predecessor ”“ “It’s not about the camp; it’s about the farm.”

She added that Occupy has been harvesting produce throughout the year, much of which is handed out on street corners, and at farmers market stalls in West Oakland and Richmond. Organizers had made arrangements to give the winter crop to students at Richmond High before police destroyed it in December.

But not everybody agrees that urban farming is the best ecological use of the disputed parcel.

Preston Jordan, a geologist and UC Berkeley researcher who opposes Occupy the Farm, was part of a loose-knit group of counter-protesters who stood by and picketed Monday evening. He says the farm interferes with a new proposal from the regional Metropolitan Transportation Commission to increase population density around Albany’s urban core. Jordan and others hail the proposed new shopping center as part of a wider effort to make goods and services more accessible without need for a car.

That puts Occupy the Farm right in the crosshairs of an ongoing environmental debate over what constitutes proper, sustainable land use. To organizers like McHale and Rawlings, the Gill Tract should serve as a laboratory for experiments in urban agriculture, rather than biogenetics. To Jordan and other critics, the plot soil is too fallow to justify farming. “To me, a farm is for the people who work there to grow enough so they can sustain themselves,” he said. “I don’t see that happening here.”

Occupy the Farm puts its own spin on that history by using rogue agriculture to reclaim space. Rawlings says that’s entirely just. “This is a UC Berkeley property, which we see as a public space, because it’s a public institution,” she argued.

Surveying the razed plot on Monday, McHale remained sanguine. He said that in just a few minutes of brute plowing, the tractor had accomplished more than what Occupiers could do over several hours with their gas-powered rototill.

“The tractor did an amazing job of tilling the land,” he pointed out, managing a wan smile. “But unfortunately, there were plants in it.”