High on the Hog 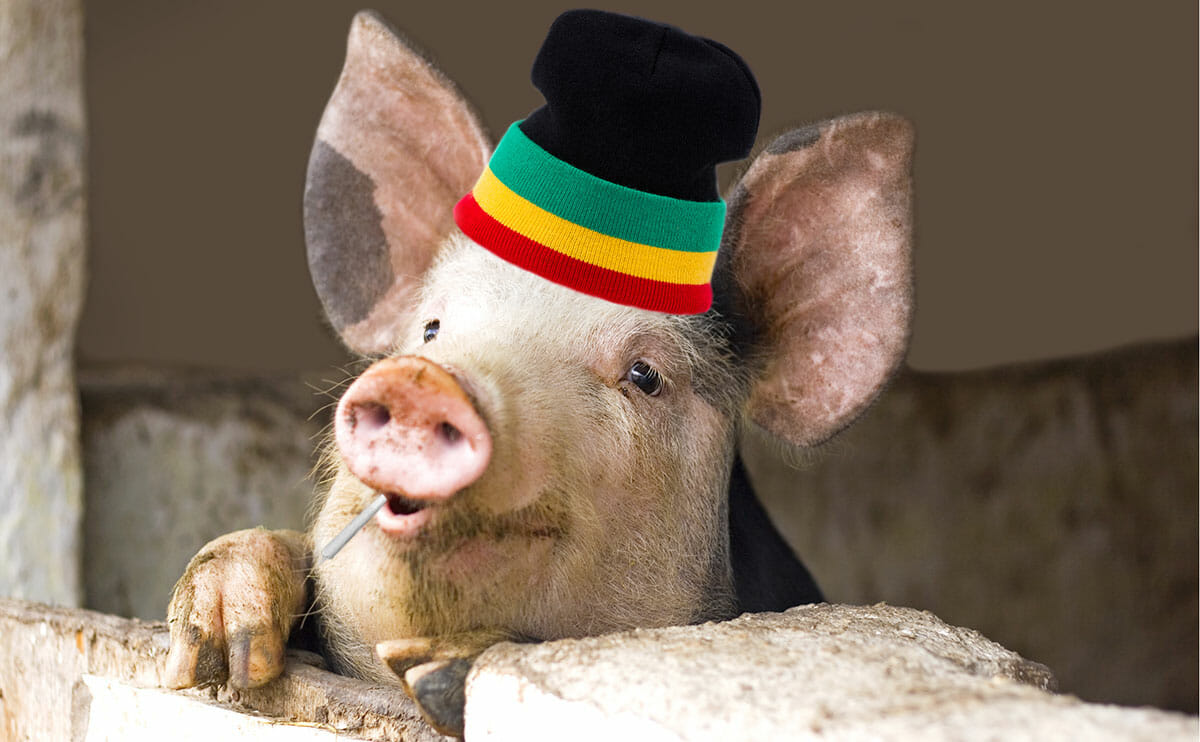 But you probably didn’t open this article to read about von Schneidau’s delicate, berry-fed quail. No, von Schneidau’s name has been all over the news for a different experiment in feed – making stoner pigs.

And it’s true, the Seattle-based von Schneidau has been feeding marijuana scraps – leaves, stems, and root bulbs – to a stable of pigs. He’s a butcher in newly street-legal Washington; the weed feed comes from a medical marijuana co-op.

Von Schneidau’s scheme is an of-the-moment novelty, allowing him to charge $120 for periodic Pot Pig Gig dinners. But he wants you to know: this isn’t about the money, or the PR avalanche (his story has gone semi-viral this week). Pot pigs are simply the latest iteration of his longtime passion – drawing connections between an animal’s diet and its meat.

Like blueberry quails, or the coveted acorn-fed pigs of Spain, von Schneidau believes meat’s flavor can be enhanced through a guided diet. Pot is the most recent of his off-template pig food, which has included spent vodka stillage, microbrew grains, and cantaloupes.

How about the million-dollar question – are the pigs high?

“You should’ve seen the pigs when we first gave them cantaloupes,” von Schneidau recalls. “They didn’t know how to open them, so they kicked ’em around like soccer balls. But once they figured it out, they were so happy, just laying on their backs and letting that sweet juice trickle down.

Charles Maxwell, an award-winning swine nutrition professor at the University of Arkansas, thinks a melon diet would have minimal effect on your pork dinner. “It’s primarily made of water, without any oil that would be retained in the tissues of the pig,” he said.

And while pot scraps contain oils that could store up in fatty tissues, it’s unclear whether this would actually improve pork’s flavor (you don’t put pot in brownies to make them more delicious).

Von Schneidau admits that he isn’t sure if his pot pigs taste better. While he’s noticed that their meat appears to have a redder tint than his pale, vodka-fed pigs, it’s an early-phase experiment. “We’re still messing around with this, seeing how it goes,” he said.

There’s also a low carbon footprint to consider. Like the cantaloupes, which von Schneidau first scored because they “were about to go sideways,” using pot leftovers handily cuts down on farm waste. He has also fed goat whey to pigs, helping solve a modern-day sticky wicket.

How about the million-dollar question – are the pigs high? Von Schneidau goofs that he recently caught some pigs puffing a joint (security cam photo above). But unlike smoking a doobie, eating raw marijuana doesn’t give mammals a high; side effects are largely medicinal.

Nutritional benefits are also near-nil. John Patience, head of Applied Swine Nutrition at Iowa State, says an all-marijuana diet would be terrible for the pigs. “There’s not a lot of energy in plants like that,” he said. “You’d certainly want to supplement their diet with minerals and protein.”

So it’s not giving the pigs much by way of health, it probably won’t make their meat taste better, and even the environmental benefits are on par with disposing of your lawn trimmings. But ah, we might be missing the point here.

“We’re having a lot of fun with this,” says von Schneidau.