Meet the Queen of Butter

Since 1972, the Midwest Dairy Association has brought Linda Christensen to the Minnesota State Fair to carve butter busts of the 12 contenders for Princess Kay of the Milky Way, an honor bestowed only to women who live or work on dairy farms. Over 12 days, Christensen and her subjects sit in a see-through 38-degree […] 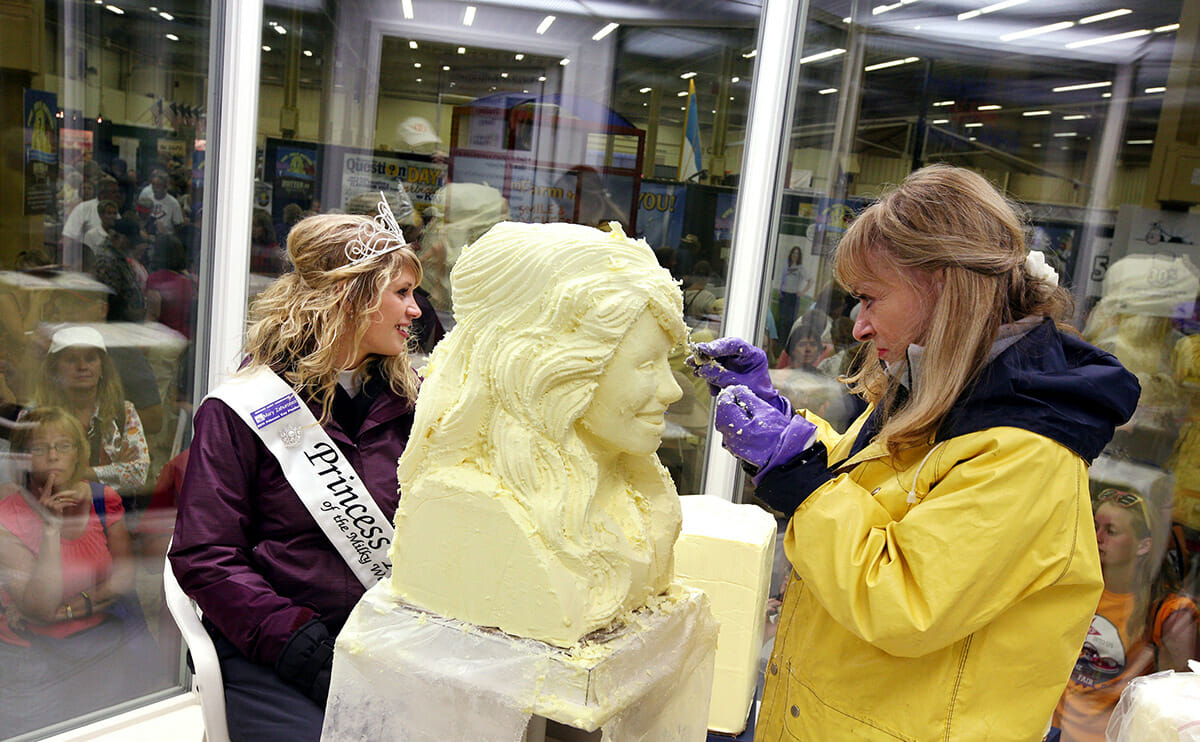 Since 1972, the Midwest Dairy Association has brought Linda Christensen to the Minnesota State Fair to carve butter busts of the 12 contenders for Princess Kay of the Milky Way, an honor bestowed only to women who live or work on dairy farms. Over 12 days, Christensen and her subjects sit in a see-through 38-degree booth wearing orange, down-filled jumpsuits as she whittles down a 90-pound block of butter in front of thousands of onlookers.

How did you get in to butter sculpting?

There’s a long tradition of butter sculpture, it’s been around since the mid-1800s. There used to be things like World Fairs and states sent all kinds of amazing displays touting their produce or whatever the state was known for and that’s what gave us things like the Corn Palace in Nebraska. Minnesota was trying to get known as the “Bread and Butter State” because it was already producing a lot of grain but they wanted to start showcasing dairy as well so they got this idea from the wives who normally ran the creameries on the farm. They started imprinting butter and doing little sculptures at county fairs and they made a huge, beautiful art form out of it.

They [The Midwest Dairy Association] got ahold of me just before I graduated from the Minnesota College of Art and Design. I had been working figuratively, so I came in and tried out and put in three hours of work and they hired me. 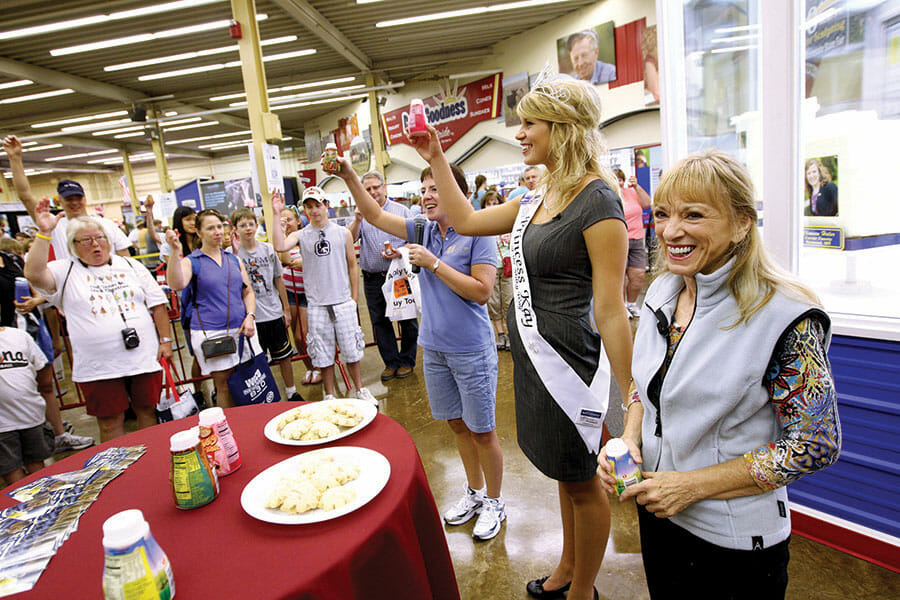 Christensen starts the first day of the fair with a milk toast alongside the 2010 Princess Kay of the Milky Way.(2011)

I do one sculpture a day for 12 days. We stay all day in the cooler and the floor revolves and all the sculptures are on display as I work. Busloads of people come from hometowns and watch and cheer on the girls. A lot of them are members of 4-H so they have friends who come up and watch.

Do you use a special butter?

Over the years I have discovered what I can and cannot work with. One plant produces butter specifically for the butter sculpture because they hand-pack it. It cannot be frozen, or it becomes totally impossible to work with, and the fresher it is the easier it is to work with. I work with 90 pound blocks. I get in around 9:30 in the morning and I finish up about 4:30 or 5 p.m., and there are breaks in between.

What are the hardest things to carve?

Certain types of faces are little more difficult for me than others. I sculpt them smiling and some faces are far more changeable, their eyes squint up more or something on their face changes a lot and that takes me a lot more time. Hair is actually not hard at all. Very, very curly hair and real tight curls take a long time. 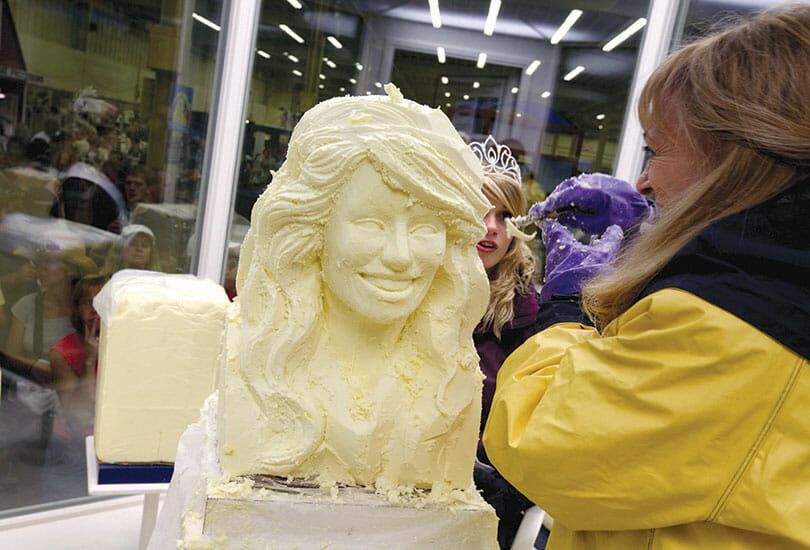 Christensen carves a likeness of Mary Zahurones, the newly-crowned Princess Kay of the Milky Way.

What kind of tools do you use?

I use mostly clay tools and kitchen tools and those kinds of things.

What happens to the heads afterwards?

It’s the best part of the whole story! The women that I sculpt take them home. Some of them keep them in those little apartment-size freezers; they buy them specifically to keep the head in. The one I know that has lasted the longest is from 1981.

Actually, there’s gotten to be a big tradition where they have a “Butter Bust” where they invite their whole town out to the farm. One had a barn dance and a petting zoo – they made a field in to a parking lot, they had a tractor and a hay wagon, and they melted the whole head down and roasted corn and had a big corn roast. They spent the whole day out there on the farm. A lot of these women are third and fourth generation on the farms they are on. More than one woman has had it on her wedding table. I know of more than one who has had at their parents’ wedding anniversary with a little sign reading “Product of Ethel and George” – a little pun because they’re dairy farmers.

More than once, girls have sliced just the face off and kept that part and used the rest. Some divide the head up and distribute it all around to people who have supported them during the contest.

How have you seen the women change over the years?

The education they’re going for has changed enormously. They’re very, very career conscious. One of the main things is that it now seems like they are the ones that are planning to take over the farm. They’re very interested in farming and that’s something that I’ve noticed changing over the years – they’re very involved with the animals and real businesswomen. 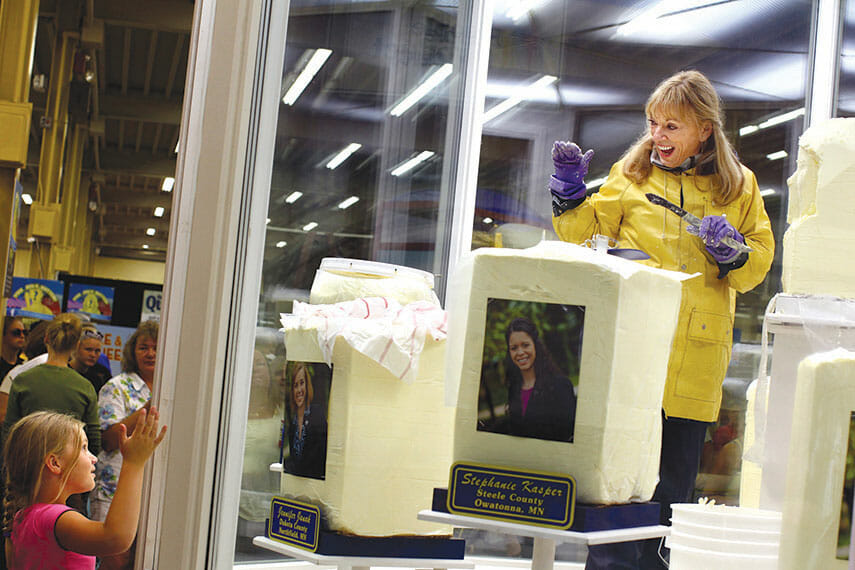 From inside her cooler, butter sculptor Linda Christensen, right, waves at Caily Schlosser, 8, of Dalton and her family. All photos were taken in the Dairy Building at the Minnesota State Fair in St. Paul.

What about the dairy industry itself?

I’d say I’ve gotten at least a Masters in dairy farming over the years I’ve heard so much about it. One of the things that amazes me is how much it stays the same in the huge commitment that these people have to make. They have to milk at exactly the same time every day. They have to find someone to do the milking for them when they come down to watch their daughter being sculpted. Boy, is there a lot of family togetherness and community togetherness. Everyone in Minnesota loves this whole contest and that’s partly because there’s still a lot ties to agriculture in that state.

I did one of David Letterman. But I’ll tell you it’s not so much the actual object that’s fun about this, it’s all the surrounding part of it that’s fun – the reaction, the stories that come back to me. There are people that have been watching me for years and they come and talk to me every year at the State Fair. I call them my “fair friends” because I’ve gotten to know them one fair at a time. And the princesses themselves – it’s a very intense day that we’re in the booth and you can’t hear anything from outside, so we sit and talk and get to know one another, and they come back to tell me they got married and have a couple kids.

I sculpted six kids from one family, and two other people I sculpted married in to the same family. It was a huge family of farmers, and every one of them has been a finalist.

This interview has been edited and condensed