The Infinite Christmas Tree: How to Cut Your Tree So it Will Grow Again - Modern Farmer
Environment, Plants

The Infinite Christmas Tree: How to Cut Your Tree So it Will Grow Again 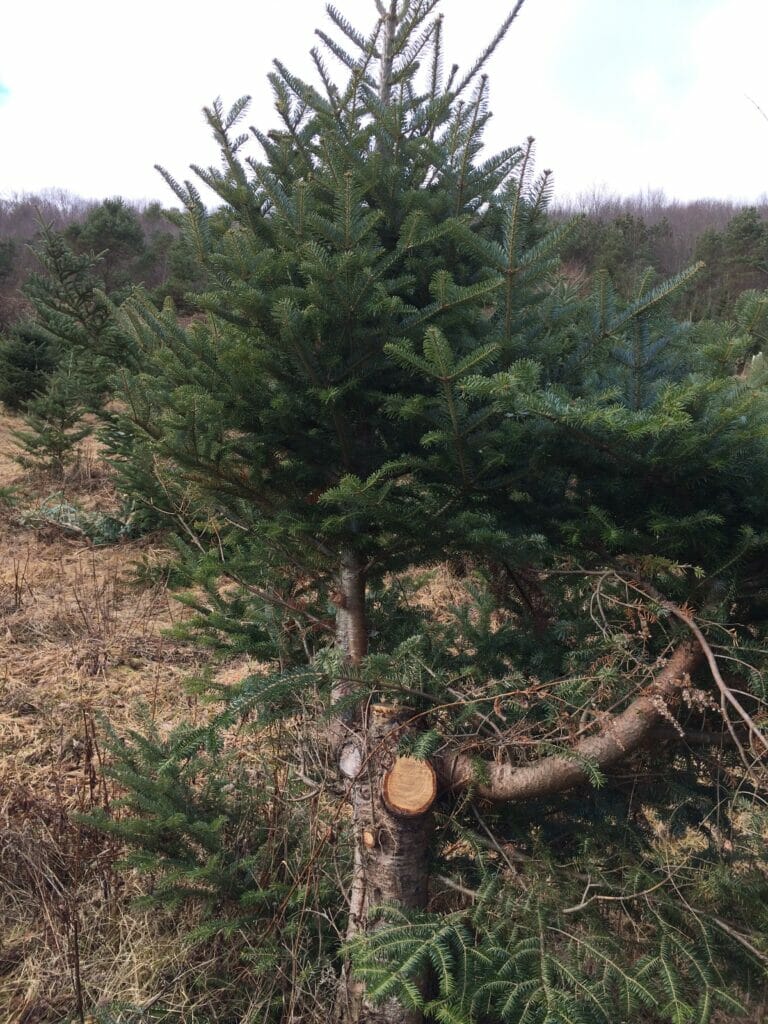 After the whole realization about Santa, one of the hardest truths to swallow about Christmas is the personal responsibility for the large-scale tree murder. It dawned on me, as an eight-year-old watching our dead Christmas tree, stripped of its ornaments and kicked to the curb for trash pick-up, that there must be a better way.

A Canadian study  suggests that cutting a real tree is a more sustainable choice than purchasing an artificial tree, but what if there was a guilt-free option? A small group of Christmas tree farmers are using a harvesting method that keeps the conifers alive, making it possible to harvest another tree from the same root system indefinitely. Stump culturing, a method of coppicing conifers, could reduce soil disruption and increase carbon sequestration. Farmers can decrease their wait time for new stock, increase their supply of salable greens and gain more soil resilience during times of drought.

In the United States, stump-culturing is sometimes attributed to Linwood Lesure. Lesure began his experiments in the 1940s and was widely known in Christmas tree circles, serving twice as president of the Christmas Tree Growers Association of Massachusetts and named the 1977 National Outstanding Tree Farmer of the Year by the American Forest Institute.

Stump culture falls somewhere in the middle between two regeneration techniques. In the first, coppicing, the tree is cut at ground level. In the second, pollarding, the tree is cut chest high to develop a dense stand of canopy branches. Stump culture is an intermediate knee-high cut that preserves a few whorls of lower branches, necessary for the photosynthesis needed for regrowth.

From a land management perspective, stump culturing has many possible benefits. According to the Palmer Drought Index, 44 percent of the contiguous US experienced moderate to extreme drought in 2022. Trees resprouting from a mature root system will have a higher rate of survival than young seedlings during low-water conditions. Managing existing stumps also means minimizing soil disturbance. Research suggests that no-tillage systems increase carbon sequestration and soil health. While stump removal strategies vary from farm to farm, many farms do mechanically pull stumps to provide more room for new seedlings. Minimizing the use of machinery may also allow growers to plant conifer stands on more marginal land, such as steep slopes, supporting soil stabilization.

For producers, the accelerated rate of return is the main advantage. “If we plant a new seedling, it will take six to eight years to get a tree back. Stump culturing takes two years off that time,” says Eli McGee, owner and manager of McGee Christmas Tree Farm in Placerville, CA. Emmett Van Driesche, owner of Pieropan Christmas Tree Farm in Shelburne Falls, MA, reports an even shorter return, in three to five years. At his farm, sometimes two or three trees can be regrown from the same stump simultaneously. 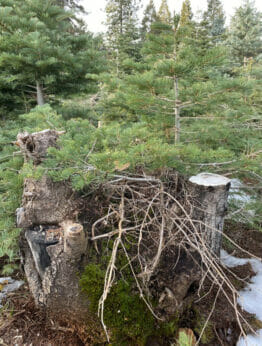 This old stump has been harvested six times, and dates back to a planting from 1978. Photography by Eli McGee

The mature skirt branches that remain after the initial cutting of the tree are large and bushy, but apart from being a maintenance hurdle, these branches represent a valuable asset. These branches, which need to be cut back every year, are the same product sought after by wreath makers. Whether a farmer is making their own wreaths or selling the boughs wholesale, stump culturing creates an abundance of superior, fresh material. Wholesale balsam boughs and wreaths are often balled early and shipped long distances from Maine and Canada.

Van Driesche capitalizes on this, making his own wreaths. He reports that wreath revenue is closing in on 40 percent of the money he makes each season. Scott Brady, owner of the Brady Tree Farm in Schenevus, NY, also reports that stump culturing has been “advantageous” for diversifying his products and adding additional revenue.

Although not unknown in professional and academic circles, stump culturing is still considered primarily the realm of the hobbyist, most likely because of the nuanced approach it requires of the farmer. “If we think of horticulture as the art and science of tending a garden, this is as much art as it is science,” says Dr. Bert Cregg, Professor of Horticulture and Forestry at Michigan State University. Whether the trees are planted in rows or grown in a more organic structure, the management of stump cultured trees requires a mental readjustment.

Stump culture is not a process of nurturing or coddling seedlings, it is working in tandem with the full strength of the tree as it regenerates. Van Dreiche says his predecessor, Al Pieropan, used to call it “leaning on the trees,” a phrase that took Van Dreiche a period of time to understand but now knows intimately. “It is culling and selecting for the best sprout from two dozen contenders. It is trimming the skirt to half of what’s there, knowing that in four or five years it will all have returned,” says Van Driesche, who calls his trees “ferocious.”

“Stump cultured trees also result in a different-looking plantation, if you can call it that,” says Dr. Cregg. Trees are harvested and grow at different speeds, resulting in a multi-aged stand with side branches coming up at all different angles, which Brady says can “whack you as you walk in the aisles and mow.” In addition to a few bruised shins, the branches can also make fertilization and irrigation more complex. 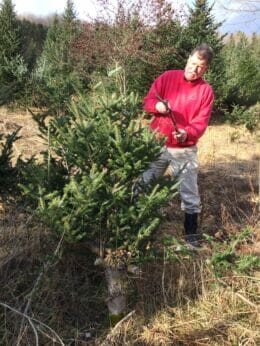 “In all of these methods, we are not looking at the regeneration of seeds but, instead, harvesting the energy of sprouts,” says Krawczyk. It is still unclear if all conifers will successfully regrow from a stump. “Are there limits? Is it universal? More research is needed.”

Krawczyk is quick to remind that “very few things benefit everything all the time.” Stump culturing as a system is not necessarily a replacement for growing Christmas tree stock from seedlings. Instead, it can be seen as another “tool in our tool kit,” he says.

Some experts worry that the exposed stumps may provide an entry point for wood rotting fungus such as Armillaria, but Dr. Cregg says the bigger risk is not being able to adapt your genetics with each successive generation. Insect pressure and illness can quickly affect an entire stand of trees, something growers usually combat by rotationally planting a different species. Stump cultured stands won’t have that same opportunity, although Dr. Cregg says growers can mitigate this risk by planting diverse stands on the onset. However, some growers, such as Van Drieche, see the continuity in genetics as an asset; they are able to choose and regrow their most outstanding specimens. Some of Van Drieche’s trees have gone through eight or nine periods of regrowth. Van Driesche compares the practice to Japanese bonsai, a biological art form with specimens 100s of years old, and he sees no sign of the trees slowing down. “I suspect that there is no upper limit.”

Popular
7 Smokable Plants You Can Grow That Aren’t MarijuanaBrian Barth
Agricultural Runoff Pollutes Well Water, a ‘Public Health Crisis In the Making’Madison McVan, Investigate Midwest
The Fertilizer Shortage Will Persist in 2023Shea Swenson
Move Over, Mezcal. A Sustainable Tequila Alternative Is Taking Over.Hollie Stephens
Why Don’t We Eat Turkey Eggs?Dan Nosowitz
Explore Modern Farmer
Related
Animals, Lifestyle, Plants
7 Ways to Recycle Your Christmas TreeDan Nosowitz
Plants
Pandemic Brings Early Crowds to Christmas Tree FarmsAlex Robinson
Features, Food Security, Labor
The Rise of Virtual Farmers MarketsLeah Borts-Kuperman
Environment, Labor, Water
California Farms and Farmworkers Attempt to Recover From Record FloodsNaoki Nitta
wpDiscuz
We use cookies on our website to give you the most relevant experience by remembering your preferences and repeat visits. By clicking “Accept”, you consent to the use of ALL the cookies.
Cookie settings ACCEPT
Privacy & Cookies Policy