As California’s water crisis worsens, farmer and activist Mai Nguyen is calling on the state to support affected small-scale agricultural producers and farmworkers. 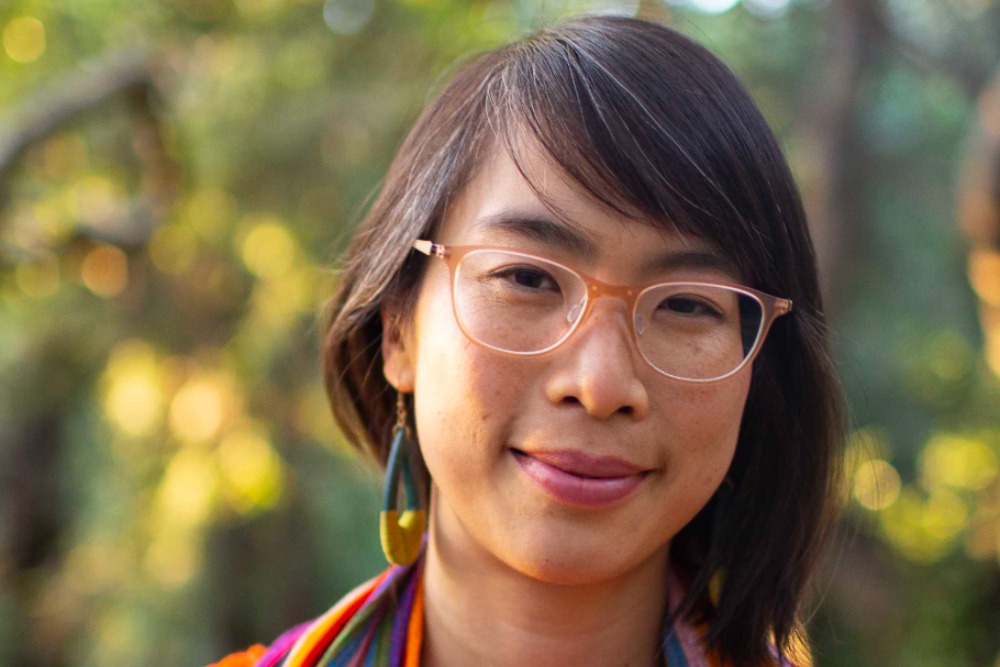 Mai Nguyen has been growing heirloom wheat varieties in California’s Sonoma County for eight years. But this spring was the first time in their career when they didn’t plant a crop at all.

“I was planning for another major drought year, but we had rain, and I’m trying to not kick myself,” they say.

The farmer and social justice activist—who distributes their grains and fresh-milled flours through a CSA-style subscription under the name Farmer Mai—has adapted specialized varieties such as Akmolinka and Chiddam Blanc de Mars to Sonoma County’s increasingly hot, dry climate, eschewing irrigation in favor of natural rainfall. They planted a crop last fall, so they’ll have something to offer subscribers later this year. But as drought and climate volatility intensify—more extreme heat, wildfires year-round, lack of rain and tapped-out groundwater—farmworkers and small-scale farmers like Nguyen are increasingly vulnerable.

RELATED: California Wants to Pay Farmers to Not Farm This Year

Agriculture makes up 40 percent of California’s water use by humans, and the 2021 announcement that the federal government would not be making water allocations to California’s agricultural producers made the situation even more dire for its small-scale farmers. Large landowners with centuries-old water rights or property adjacent to waterways have nearly unfettered access, and it’s easier for them to spend tens of thousands of dollars to build new wells when theirs go dry. But small farm operators, including those like Nguyen who lease land, tend to have shallower wells that dry up more quickly. This makes them subject to price hikes for “hardship water,” which can cost up to five times the usual price. For the most vulnerable, that means not only trucking in water for irrigation but also for basic household needs such as cooking, bathing and flushing toilets.

“I think people are used to having jobs that are separate from their life. But on a farm, the water that is for the crops is also for you,” Nguyen says. “If your house is on that agricultural land, limited water to the crops also means limited water to your family.”

A lack of water is just the latest challenge—along with lack of childcare, supply chain problems, rising costs and labor shortages—pushing independent, small-scale farm operators like Nguyen past their breaking point. California’s Department of Food and Agriculture offers a patchwork of funding programs to agricultural producers and farmworkers, but few offer the direct, no-strings-attached payments people need to pay for basic living expenses. “You’d be hard-pressed to think of examples in the US when there’s been consistent support for farmers or people who directly work with the land,” Nguyen says.

That’s why Nguyen is working with the Berkeley Food Institute and California independent farmers and advocates—including Scott Chang-Fleeman of Shao Shan Farm, Caiti Hachmyer of Red H Farm, Thea Carlson, Li Schmidt and Sierra Harvest‘s Molly Nakahara—launch a campaign, Essentials for Essential Workers, that would provide a guaranteed basic income to small-scale agricultural producers, farmworkers, and Indigenous hunters and harvesters based on need.

In a policy paper published May 17, a team of graduate students at UC Berkeley’s Goldman School of Public Policy examined the estimated costs and impacts of implementing a direct payment program for the most vulnerable independent farmers and farmworkers. In “Providing Essential Support for Essential Farmworkers in California,” authors Peter Amerkhanian, Uwahorasenga Marie de Dieu, Enedina Garcia and Daniel Tan found that, regardless of feasibility, there’s a dire need for support of California’s small-scale independent farmers and agricultural workers. “There is a need for some form of consistent support from the State of California in order to bring earnings closer to a livable wage, sustain small-scale farmers’ businesses through periods of volatility, and allow them to pursue ecologically effective farming that can conserve water and maintain soil health,” the report states.

The UC Berkeley paper recommends direct payments to farmer and farmworker families that would raise incomes to a minimum of $32,000—a small but significant step toward economic justice for independent farmers and farmworkers in a state with one of the highest costs of living. Payments would be based on income level rather than farm size to direct funds to those with the most need and include those who lease rather than own the land they farm. California approved the country’s first guaranteed basic income program last year, so the state’s Department of Social Services has the infrastructure in place to implement such a program.

Nguyen sees the initiative as an opportunity to right a long-standing wrong at a time when California just experienced its second-driest year on record—and is weighing how to allocate a $97.5-billion budget surplus. The state also has the largest agricultural economy in the US, employing more than 400,000 workers and growing one-third of the country’s vegetables and two-thirds of its fruit and nuts, including 36 percent of US organic farm production.

​​”If you ate something today, it was probably from California,” Nguyen says. “We should be able to invest in the people who are ensuring that so many people across the country are able to eat.”

This story has been updated to include the names of other farmers and advocates working together on the campaign.

There is NO surplus. The CA public employees’ pension system has about $1.5 TRILLION in unfunded liabilities. Can’t believe anything CA’s governor says.

The woke garbage has nothing to do with farming…