How to collect and store rain for reuse. 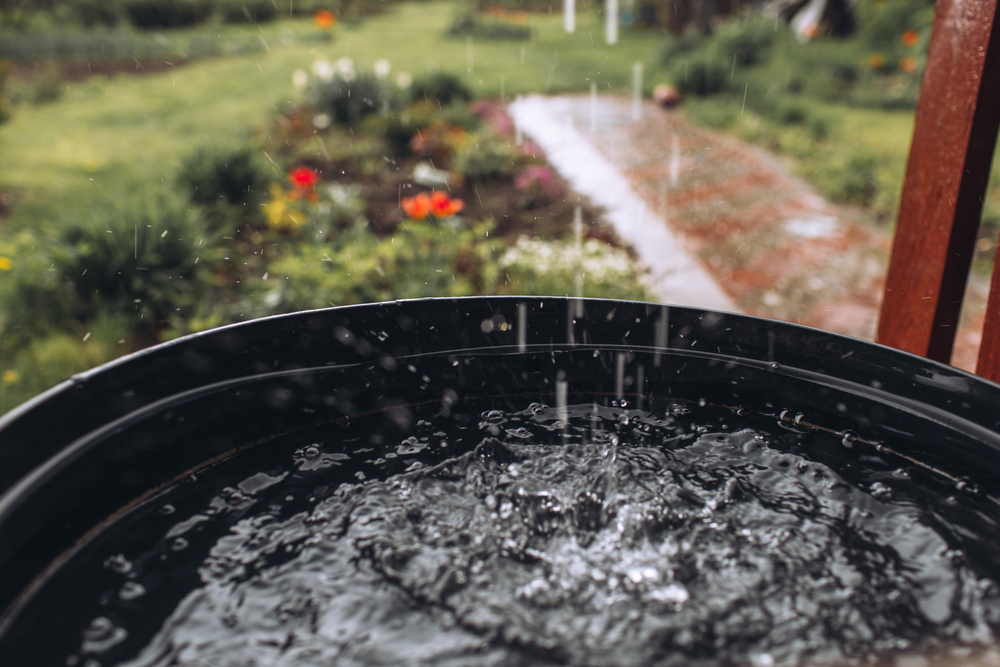 How hard could collecting rainwater really be? Just put out a bucket and wait for the clouds, right?

Well, not really. This task is deceptively complex, but it can be a game changer for some growers. Whether you have a small backyard garden or a large farm, making the most of rainwater—a free resource we all desperately need—is crucial. But before you rush into it, there are some key steps you need to take first.

RELATED: Agriculture’s Water Challenge Is About to Get a Lot Worse

Believe it or not, there are some states where collecting rainwater is restricted. Colorado, Arkansas and Illinois all have restrictions on how residents can harvest rainwater, how much they can keep and what they can use it for.

Alternatively, some states, such as Florida, Rhode Island and Virginia, not only encourage citizens to collect rainwater but even offer incentives in the form of rebates or state-provided rain barrels. 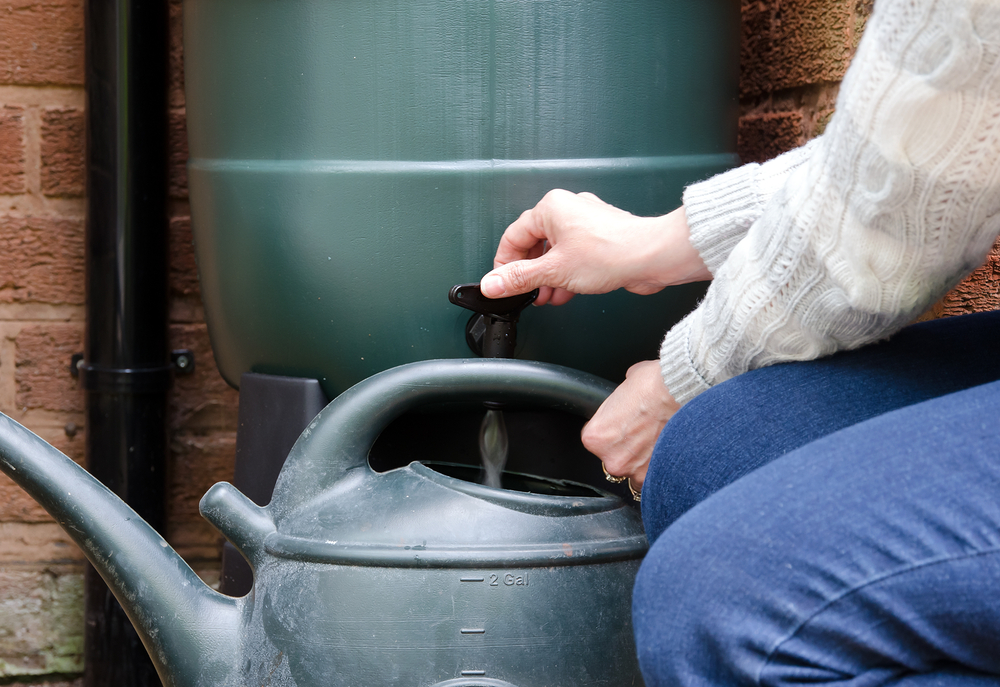 Use your collected rainwater to water your garden. Photo by DJTaylor, Shutterstock.

In some cases, your state may not have any laws dictating rainwater harvesting, but they may have specific plumbing codes you’ll have to adhere to for any complicated setups. Plus, if you belong to a homeowner association, you should check your bylaws as well. Better safe than sorry.

What Will You Use the Water For?

Before you collect a drop, figure out what you’re going to use the rain for. This will help you decide how big a tank you’ll want to get, if you need to deal with extra plumbing and where to keep everything.

Rain barrels come in a variety of sizes, and the size of your tank depends on a few factors: how much rain you’re aiming to collect and where you will keep it. It’s easy to forget when it’s a few droplets, but water is heavy—more than eight pounds per gallon heavy. So, if you have a 3,000-gallon tank, “it can be very heavy and dangerous at the same time,” says Christy Langendoen, owner of Water Storage Tanks, Inc. in Austin, Texas. She’s also a board member for the American Rainwater Catchment Systems Association (ARCSA), a nonprofit with great resources to get you started. As Langendoen explains, because water is so heavy, there could be codes or regulations to follow when you harvest it in large volumes. “You might need structural engineering for your tank, so you don’t hurt yourself or others,” she says. 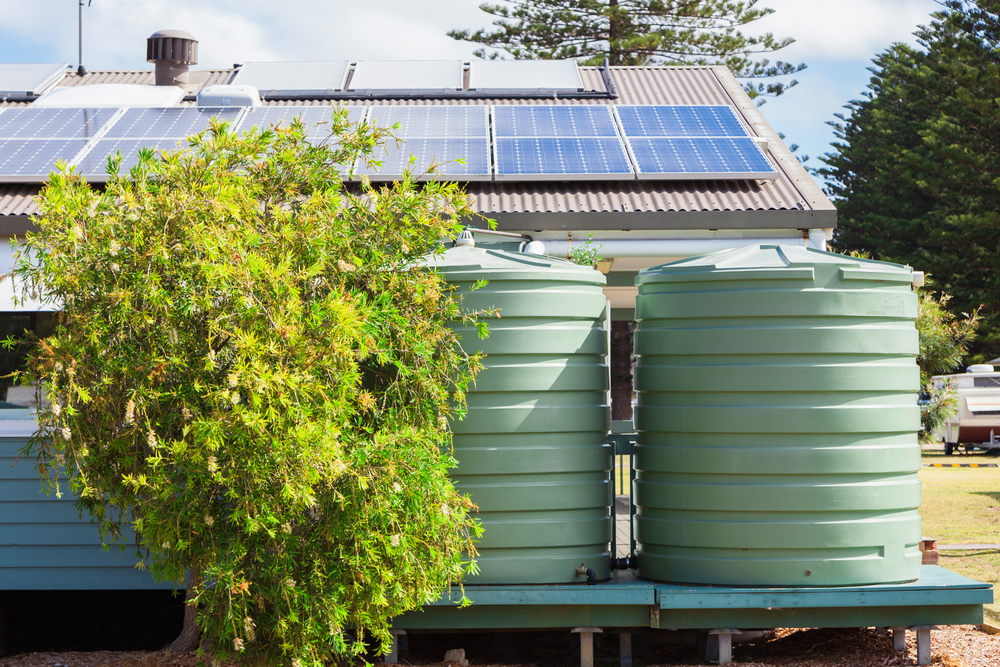 Home rainwater tanks come in a range of sizes. Photo by zstock, Shutterstock.

By deciding what you’ll use the water for, you can also figure out how you might need to treat or clean the water. Langendoen says that, for the most part, if you’re using the water to irrigate your plants, you don’t need to treat it beforehand. But if you plan to drink or cook with the water, you absolutely should. ARCSA has a procedure that will help you treat the water to get rid of sediment filtration and bacteria. “Rainwater doesn’t have bacteria in its own right, but when it hits the catchment surface, for instance, your roof, it will pick up bacteria,” Langendoen says. There are also groundwater collection systems, but, similarly, once water hits the ground, it will pick up bacteria, along with oils and other sediments. So, before you drink that water, clean it up.

Let’s say you only plan to use the water for irrigating crops. That means you don’t need to worry about treating it, right? Well, sort of. You don’t have to treat it the same way, but you do want to keep your water tank clean and clear of gunk. That’s where pre-filtration comes in.

“We want to prevent leaves and debris from going into the tank. So, there are different screens and different filters to keep that major debris out,” Langendoen says. There’s also something called a first-flush diverter, a setup that automatically diverts the return inches of rainwater out of your tank. “That’s assuming that things like bird feces and pollen will come off your roof at that moment, which is not always the case. But there are different types of pre-filtration that you will want to do for irrigation, because you don’t want your tank itself to become basically a tea pot with a tea bag in it.” 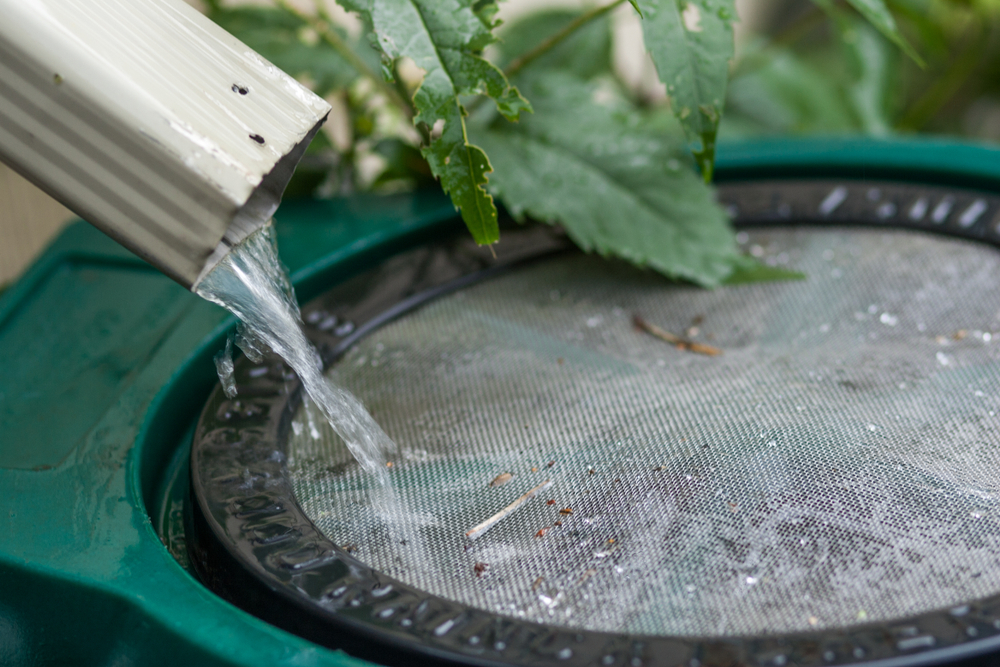 A filter can help collect debris and other things you don’t want in your rainwater. Photo by Glenn R. Specht-grs photo, Shutterstock.

Depending on how often you use your collected water, you’ll also want to make sure that it’s aerated to keep it fresh and make sure it doesn’t grow stagnant, which is when it takes on a murky appearance or develops algae or a surface scum. The longer you go between uses of the water, the more important aerating it becomes. You can store the rainwater for a long time as long as you keep it free of pests and aerated.

So, should you harvest rainwater? Absolutely.

RELATED: Roof-to-Garden: How to Irrigate with Rainwater

The benefits might be obvious for people in dryer climates, but even residents of rainy states should take advantage of collecting rainwater. “In your dry, arid states like Arizona, you want to capture that rain when it does fall, so you can utilize it when you don’t have it,” Langendoen says. But even in areas where a lot of rain might fall, such as the Pacific Northwest, collecting rainwater can help with stormwater management. “It detains the water during a rainfall that would typically go straight to rivers and streams, which creates flooding.” Holding that rainwater back can help a lot with groundwater management and slow the buildup of water in low-lying areas.

It’s a little more complicated than putting out a bucket and waiting for the clouds, but harvesting rainwater is definitely worth it.

Popular
7 Smokable Plants You Can Grow That Aren’t MarijuanaBrian Barth
New Solar Panels Allow Farmers to See the LightNaoki Nitta
6 Differences Between Llamas and AlpacasAndrew Amelinckx
The Cold Swim HomeMarcie Callewaert
Goat Sex: Everything You Wanted to Know But Were Afraid to AskAndrew Amelinckx
Explore Modern Farmer
Related
Features, Personal Essay, Water
The Cold Swim HomeMarcie Callewaert
Environment, Labor, Water
California Farms and Farmworkers Attempt to Recover From Record FloodsNaoki Nitta
Books, How-To, Lifestyle
How to Turn Your Garden Into a Business, No Matter the SizeEmily Baron Cadloff
Food Security, Labor, news
A New Egg Co-operative Has Hatched in the Western U.S.Lindsay Campbell
wpDiscuz
We use cookies on our website to give you the most relevant experience by remembering your preferences and repeat visits. By clicking “Accept”, you consent to the use of ALL the cookies.
Cookie settings ACCEPT
Privacy & Cookies Policy