Roof-to-Garden: How to Irrigate with Rainwater - Modern Farmer
How-To

Roof-to-Garden: How to Irrigate with Rainwater 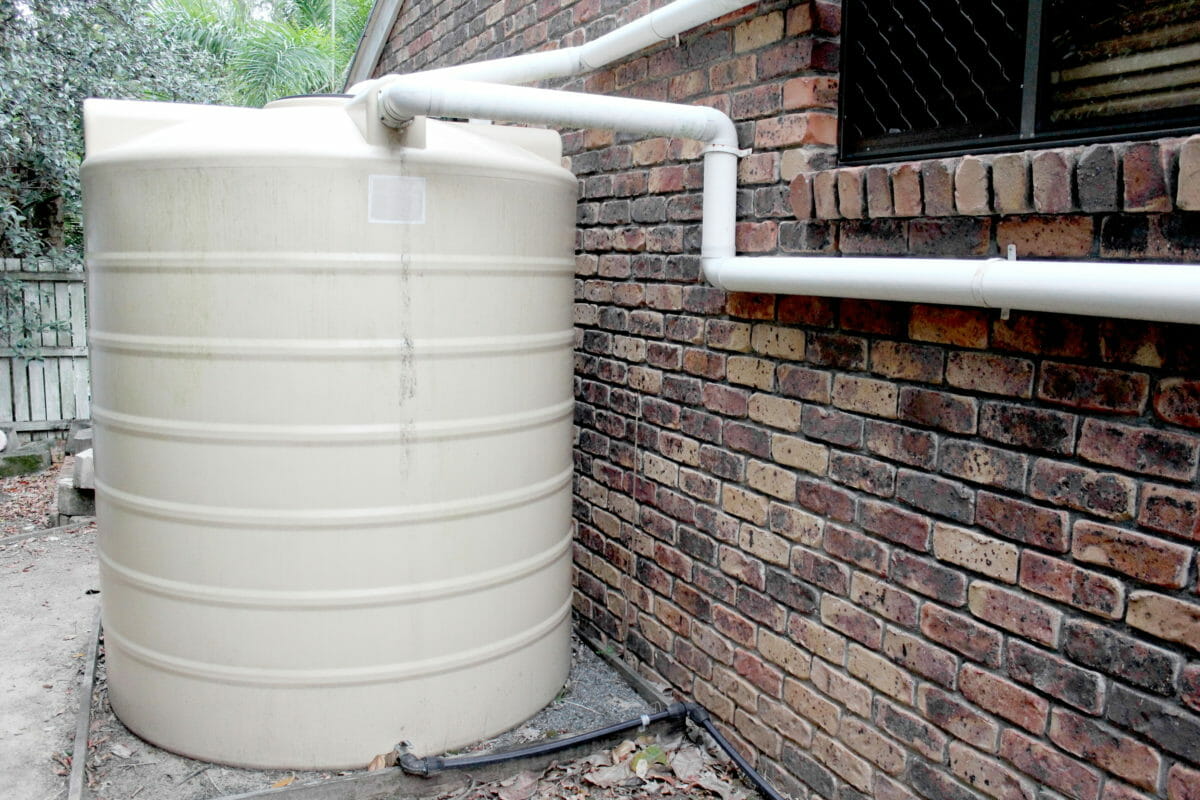 Before installing a rainwater harvesting system, make sure the practice is legal in your area.
Photography By Kathie Nichols / shutterstock.com
Share
Tweet
Pin
Email
841 Shares

If you live in a townhouse or apartment with a tiny yard, one of those store-bought barrels will probably do the trick. In that case, there’s not much to know – most come with instructions and all the hardware you need. But if you’re planning a more ambitious project consider the following pointers before getting started. Before you begin, make sure that rain harvesting is legal in your area.

To give you an idea of how much water you have at your disposal for irrigation, here is a simple equation for figuring out how many gallons your roof sheds when it rains:

There are rain tank calculators online so you don’t have to do the math, but here is an example. If you lived in a modest 20′ by 30′ house (measure roof size as the length times the width of the house) in a modestly wet region with 40 inches of annual rainfall, that’s (20 X 30) X 40 X .6 = 14,400 gallons. Here’s a handy web tool to find out how much rainfall you get in your area each year.

In a very dry climate where most of the rain falls in winter, as is the case along most of the West Coast, you could easily use that much irrigation water in spring, summer, and fall – and much more, depending on the size of your garden. But if you live an area that typically gets rainfall throughout the warm parts of the year (plants rarely need irrigation in the winter), how much water you can catch in a year is not as relevant as how much you’ll need during a summer dry spell.

Irrigation needs vary considerably depending on climate, shade, soil type, and vegetation type, but this equation will give you a rough idea of your garden’s water demand:

If you have a modest 30′ by 30′ yard and want to have enough water to irrigate for a month-long dry spell (light rain doesn’t count – at least one inch of precipitation is needed to saturate the soil in dry conditions), which is not uncommon in most of the country (except in the Southwest and on the West Coast, where dry spells last many months), that’s (30 X 30) X 4 X .5 = 1800 gallons.

In arid regions like Los Angeles or Phoenix, where eight months can pass between major rainstorms, the equation looks like this (30 X 30) X 32 X .5 = 14,400 gallons. So you can see why it makes sense to focus on how much you can actually collect from your roof in such climates, rather than how much you can use.

The size of your rainwater catchment system may ultimately depend on your budget and how much space you are willing to dedicate to it. Rainwater is typically stored in polyethylene (plastic) tanks, which can be purchased at farm supply stores or shipped from online suppliers like The Tank Depot and Plastic-Mart. Most tanks cost roughly 50 cents per gallon of storage, though the larger sizes are often much pricier.

Tanks are typically positioned at or near a downspout so the water can be funneled in directly. Rain tanks aren’t pretty, so you’ll probably want to situate them out of sight, or conceal them with a trellis, shrubbery, or other enclosure.

One option to prevent an eyesore next to your house is to collect water in small barrels at the downspouts, and then pump the water into a large central tank located away from the house. Another option is to bury rain tanks near the house – in this case, they’d be considered cisterns – and let the water flow from the downspouts through buried drain pipes and into the tanks. Typical polyethylene tanks may not be used underground, though specially designed underground tanks are available (they cost two to three times as much as aboveground tanks, however).

Of course, you can also collect water from the roofs of barns, sheds, and other outbuildings, which may offer better opportunities to conceal the tank than positioning it next to your house. Keep in mind that each downspout only drains a portion of the roof, so match tank size to roof area accordingly. Where you have several downspouts along one side of a house or outbuilding, it’s possible to combine the flows into a single tank.

Rain tanks are extremely heavy when full of water (water weighs about 8 pounds per gallon), so you need to create a firm base for them to rest on; otherwise, the earth below may settle under the weight and cause the tank to shift.

First, remove the topsoil and then spread a 6-inch layer of gravel or granite fines to create a pad for the tank, grading the surface flat and smooth and tamping it (with a manual tamper for small areas, or a power tamper for large installations) to prevent the material from settling. Building codes typically require a 6-inch concrete slab to be poured as a base for tanks 5000 gallons in size and larger.

Next, you’ll need to route the downspouts to the openings on top of their respective tanks. Simply cut into existing downspouts above the height of the tank and use a combination of “A” and “B” style elbows and lengths of downspout (a selection of gutter supplies is available at any building supply center) to reroute the downspout to the tank. Use a carpenter’s level to ensure that horizontal sections of downspout are sloped “downstream” at a minimum ratio of ¼-inch per linear foot.

Here are a few recommended accessories to place between the top of the downspout and the opening of the tank:

All rain tanks have an overflow outlet near the top of the tank that should be connected by drain pipe to the drainage system that the downspout previously flowed into.

Connecting to the Irrigation System

Your irrigation system may be as simple as a hose connected to the valve at the bottom of the rain tank. Of course, this gravity-powered approach only works if the area you’re irrigating is lower in elevation than the water level inside the tank.

There are a variety of pumps and pump accessories available to pressurize your irrigation system with water from a rain tank, but unless you have serious plumbing and electrical expertise, you’re better off hiring an expert for this part. Setting up an effective pumping system depends on the specific context of your water storage and irrigation system; there are many technical details to be aware of to make sure you get the pressure you need, minimize electricity consumption, and avoid wearing out your (expensive) pumping equipment prematurely.

For automated irrigation systems, it’s possible to tie the pump to the irrigation control box, so when each irrigation valve opens according to its schedule, the pump kicks on and provides water from the tank.

Thank you for the email and great info