Opinion: Farmers, You Can Help Bees By Planting Lots of Flowers

Monoculture blooms are a threat to bees. But farmers can reduce this threat by planting hedgerows with diverse mixes of flowers. 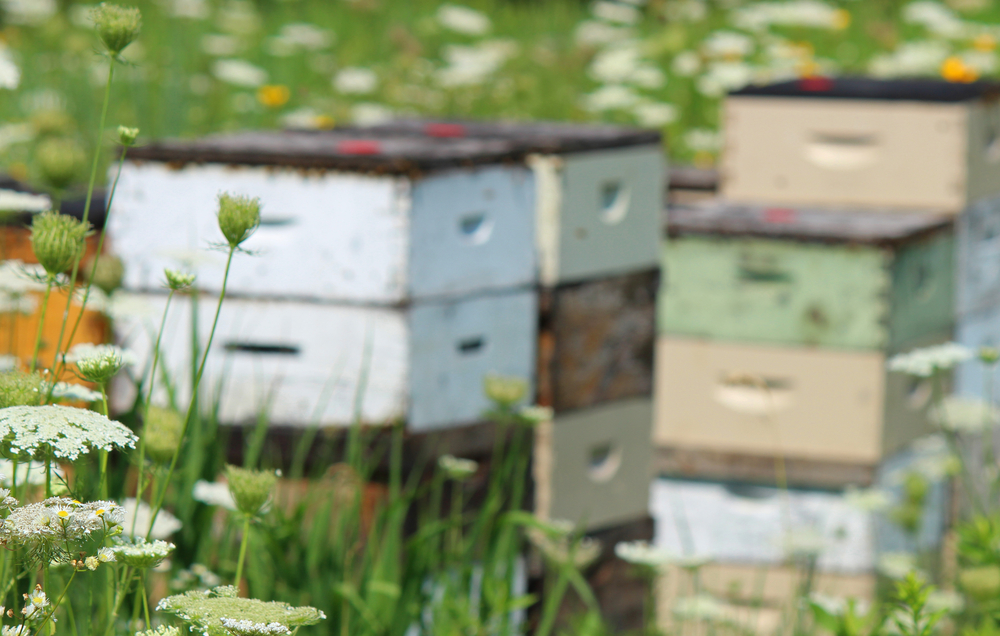 It’s springtime in California, and bees are emerging to feast on flowering fields—acres upon acres of cultivated almonds, oranges and other fruits and nuts that bloom all at once for just a few weeks. Farmers raise these lucrative crops in monoculture fields, each planted with neat, straight rows of a single type of crop.

The agricultural heart of California is the Central Valley, one of the most productive agricultural regions in the world. I recently drove north through the valley on Interstate 5, a 450-mile stretch of monoculture farms and agricultural land that runs from Bakersfield to Redding. Flowers were blooming as far as the eye could see. There is so much bloom here that commercial beekeepers truck in over two million colonies of bees in spring to ensure that every last flower is pollinated.

As a bee biologist, I study why bees are dying. Although monoculture blooms provide food for bees, scientists know almost nothing about how temporary mass-bloom events influence bee health.

[RELATED: A New Approach to Protecting Bees From Toxic Pesticides]

I wondered whether bees in these monoculture fields were getting sick in the same way a crowd of hungry people with unwashed hands can get sick by converging at a brunch buffet. Imagine not washing your hands after picking up the tong for hash browns—hundreds of times in a row.

I found that bees foraging in monoculture pick up parasites at high rates. Disease is a leading cause of bee decline, so my research indicates that monoculture blooms are a threat to bees. However, I also found that farmers can reduce this threat by taking a page from backyard gardens and planting hedgerows with diverse mixes of flowers.

Bees’ main goal in life is to collect pollen and nectar to feed their young. But as bees forage, they are exposed to bacteria, fungi and viruses, which can spread among bees via flowers.

For humans, social interaction or touching shared doorknobs in highly trafficked office buildings can spread viruses and other pathogens. Bee scientists joke that, for bees, flowers are the dirty office doorknobs.

Artificially providing animals with food can affect the spread of diseases in two ways: It can dilute them or amplify them. When a monoculture crop blooms in a landscape that’s otherwise void of food for bees, it offers an attractive pulse of pollen and nectar. When bees cluster together, disease may be more likely to spread between infected and noninfected bees.

[RELATED: These Companies Will Do the Beekeeping For You]

But that’s not automatic. Flowers can feed bees and prop up their immune systems, making them less vulnerable to disease. Disease spread is also hampered if many different bee species are attracted to flowers, because not all bee species harbor all parasite species.

As the mix of bees in the community becomes more diverse, parasites are more likely to encounter unsuitable hosts, breaking up the the chain of transmission. This suggested to my research team that mass blooms could help bees under the right circumstances.

We studied bees in sunflower fields in California’s Central Valley. Sunflowers are grown for commercial oil manufacturing and rely heavily on pollinators such as honeybees, bumblebees, sunflower bees and sweat bees.

Some of our sunflower study sites were grown as traditional monocultures, while others were grown adjacent to hedgerows, which are flowering strips of perennial plants such as California rose, Mexican elderberry and perennial sages. These hedgerows turn monoculture farms into more diverse systems.

Our team of professors, postdoctoral researchers and students walked through each site with aerial nets, cajoling bees into tiny sterile tubes. Back in the lab, we tested each bee for seven parasites commonly implicated in bee declines using molecular techniques.

Bees really like mass-bloom events. We discovered 35 different bee species visiting sunflowers, with their abundance highest at the peak of sunflower bloom. Places with historic legacies of growing sunflowers hosted more abundant bee populations than sites where sunflowers had been planted only recently. Even at farm sites with hedgerows, bees were consistently found foraging on sunflowers at higher numbers than on hedgerows.

But apparently, bee gluttony comes with a cost. We found that these increases in bee abundance were subsequently associated with higher rates of parasitism. Of the individuals we screened, almost half had at least one parasite, and about a third had multiple parasites. The more bees in sunflower fields, the more parasites. Sunflower blooms were aggregating bees, which in turn was amplifying disease risk.

We also found something encouraging: When bees had access to hedgerows that contained many different kinds of flowers, they had lower rates of parasite infections. This suggests that in the presence of many flower types, bees disperse and spread across resources, reducing each individual bee’s likelihood of encountering an infected individual. Flower diversity may also provide immunity benefits to bees through other mechanisms, perhaps by enhancing nutrition.

Agencies, organizations and researchers are working to promote hedgerows and other forms of bee habitat. For example, the nonprofit Xerces Society offers farmers a certified “Bee Better” eco-label, which indicates to consumers that the farm has dedicated five percent of its land or more to pollinator habitat. And land-grant institutions such as the University of California, Cornell University and the University of Florida are teaching local communities about plant choices that work best for bees. As an agricultural extension agent, I believe that together, efforts like these can help bring back healthy pollinators by promoting habitat conservation.

Hamutahl Cohen is an agricultural extension agent with the University of Florida.