Researchers at NC State make a sizable discovery about the impact of bees on the self-pollinating plant. 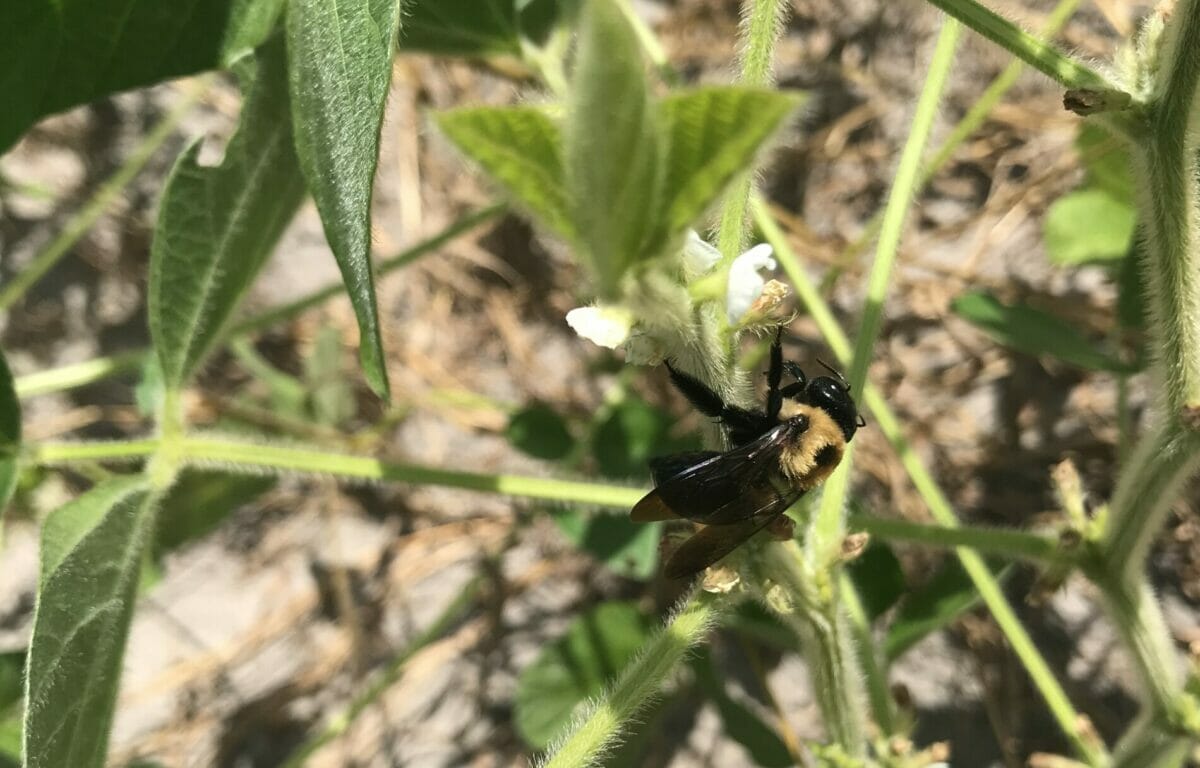 Researchers have found a reliable way to get soybean plants to produce bigger soybeans—and it doesn’t involve a lab. According to a recent study done at North Carolina State University, bees will give soybeans a boost if the crops are planted near the pollinator’s habitat.

With bee populations on the decline, integrating plant habitats into agriculture landscapes is one method believed to support populations. There are still questions, however, about functionality and impact on agriculture ecosystems, particularly with pollinator-independent crops such as soybeans.

The paper, published in the journal Agriculture, Ecosystems and Environment, sought to investigate how having pollinator habitats in the vicinity of soybean fields impacts bee species and soybean yields. The researchers’ findings showed soybeans near the bee habitat were 6.5 percent heavier than those in distant fields, suggesting that bees in fields closer to the pollinator habitat were more supported with resources and less likely to leave for resources outside of the study area.

Researchers say their study is important because there are few scientific initiatives that have analyzed self-pollinating crops such as soybeans. Other studies have largely looked at impacts of planting a habitat around pollinator dependent crops such as blueberries or strawberries.

Soybeans were also chosen for the study due to their prevalence in American agriculture. The soybean production industry, valued at $46.1 billion, is somewhat of an economic powerhouse. Soybeans are also the second most grown crop in the country, and next to Brazil, the US is the second largest producer in the world.

Researchers believe planting soybean fields closer to bee habitats could create greater financial opportunities for the crop, noting the 6.5 percentage growth from crops by bee habitat. “That’s a substantial difference in the size of soybeans,” says David Tarpy, co-author of the paper and a professor of applied ecology at North Carolina State University. “Given that soybean farmers sell their crop by weight, it could make a meaningful difference in a grower’s profit margin.”

The study was completed using eight research stations across North Carolina. At each station, scientists evaluated two soybean fields: one that was adjacent to an established area of a pollinator habitat and one that was just less than kilometer away. They planted wildflower seed mixes in unused land to create the habitat.

To understand impacts on bees, their populations were surveyed in both soybean fields and at their habitat spots. This consisted of a detailed visual assessment to establish the presence of bees in quantity and which species were present at each location. They collected samples of individual bees to confirm their identities and pollen samples, which included habitat pollen, soybean pollen and environmental pollen. This helped researchers better understand which plants they were pollinating.

[RELATED: Harnessing the Benefits of Wild Birds On Farms]

Researchers found all bees they identified in both soybean fields had soybean pollen on them. This suggests the bees collected resources from the crop. Bees with habitats further away had more environmental pollen types on their bodies, suggesting that they made farther treks outside of the research stations. Researchers say this also means that, no matter what, bees are going to collect resources from other plant sources and will go find them elsewhere if needed.

“For many bee species, they also need to collect from a variety of plants to stay healthy,” says Hannah Levenson, a postdoctoral research scholar at North Carolina State University and corresponding author of the study, “It is better for the bees, and the growers, to have additional resources nearby crop fields so that bees have the  resources they need without traveling far away.”

Levenson says this finding highlights the importance of considering pollinator habitats in pollinator-independent crops, as they may still benefit from and be attractive to pollinator communities.

Scientists say their findings are applicable only to ecosystems in the southeast—despite soybean crops being popularly grown in the Midwest—as different areas of the country have different soybean cropping systems. They hope their work opens the door for further exploration in other regions, as well as additional studies  investigating the potential benefits of pollinators being in close proximity to other self-pollinating crops.