Since discovering PFAS contamination on multiple farms last year, the state has served as a national model to stop its continued spread. 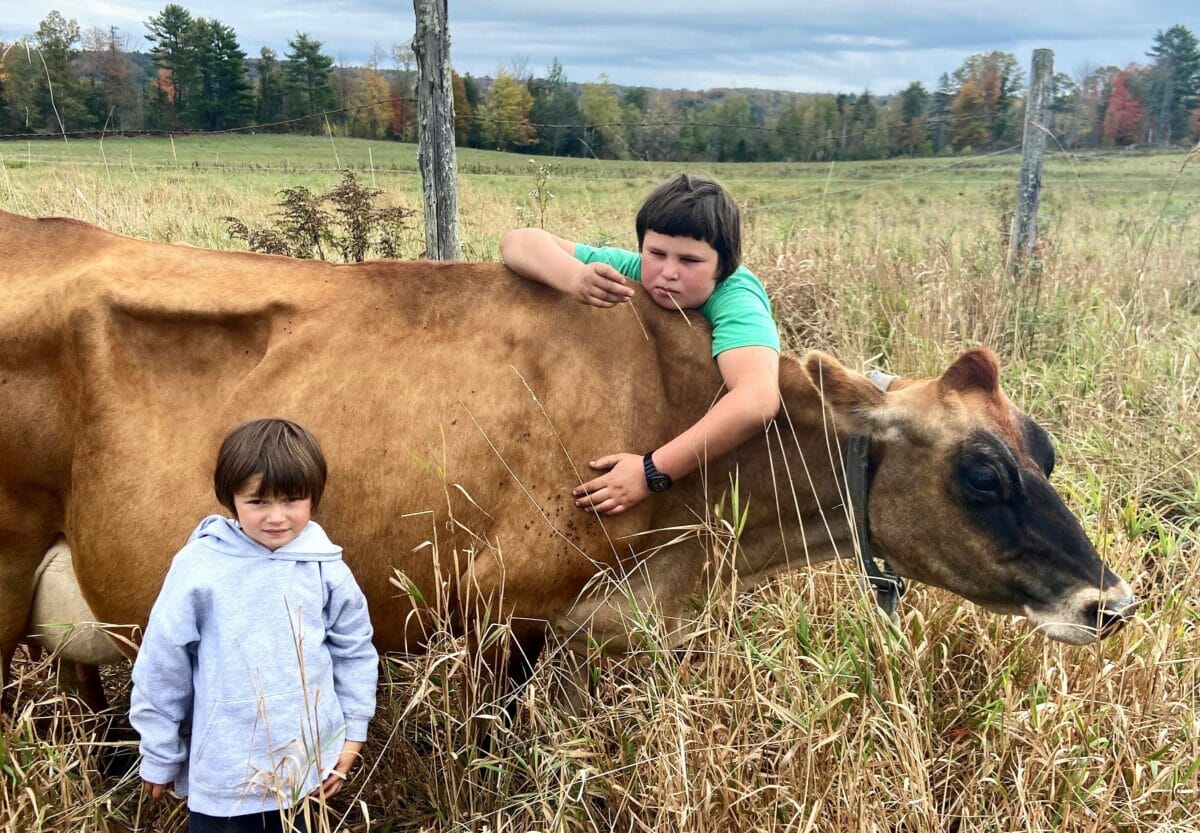 Forty-acre Songbird Farm sits atop a hill in the small rural farming community of Central Maine. Owners Johanna Davis and Adam Nordell, with their three-year-old son Caleb underfoot, grew organic vegetables and grains for themselves, local co-ops, artisan bakers and a home-baker CSA. But their livelihood and way of life came to a halt on a cold winter day last December when test samples of their water, soil and produce came back positive for per- and polyfluoroalkyl, or PFAS.

There are nearly 9,000 different chemicals used today that fall under the group of chemicals called PFAS, which have been around since the 1950s and are linked to a myriad of health issues, including increased risks of cancer and compromised immune systems. In recent years, the growing presence of these chemicals in drinking water has garnered considerable attention. And now, as PFAS is discovered more in soil and food, alarm bells are ringing.

Songbird’s well water tested at 400 times the state’s threshold for PFAS. Davis and Nordell paused all sales, stopped plans for the upcoming growing season and are now debating the safety of continuing to live on their land since recent bloodwork found extremely high levels of PFAS, which can be carried in dust, present in their own bodies. These “forever chemicals,” as they are often referred to since they don’t break down easily in the body, entered the farm’s soil when the fields were spread with biosolids sludge or treated wastewater used as a means of disposal and fertilizer, sometime in the early 1990s—years before Davis and Nordell bought the property and years before the previous owner had it certified organic.

“Everything about this has flipped our lives on their heads,” says Nordell, who has been farming for 12 years. “Somewhere between 50 and 70 percent of our diet is coming off our land, and when we’re not farming, we’re cooking together, we’re baking bread, we’re sharing food that we’ve produced with our friends—that’s central to making meaning and expressing love in our lives. So, to be stripped of that suddenly has really rocked us.”

A few months later, Misty Brook Farm, less than 20 minutes down the road, discovered PFAS in its milk, prompting it to stop selling all of its farm products, including meats, chicken, eggs, grains and vegetables, and scramble to get more testing done and find the source. Each test costs the farm $500 and owners Katia and Brendan Holmes estimated needing close to 200 tests to clear all of its products.

The Holmes did more tests, which revealed the 600-acre organic farm’s soil, animal feed and water were clean, and the original contamination came from 35 bales of hay grown on another farm that the cows ate from December 2021 to January 2022.

To detox their herd of 62 cows, they must continue to milk them daily and dump the milk. The levels of PFAS, which concentrate in cows’ milk and are expelled much faster than in human bodies, will slowly leave the cows’ bodies when they are fed clean hay and milk daily, which could take six months to a year. It could last even longer since they don’t know what the effects are on the unborn calves of the 24 cows due in the next couple months, says Katia. The state will begin testing the contaminated herd regularly.

In the meantime, the Holmes purchased a new herd of 16 organic milking cows, after testing them for PFAS, to be able to continue their milk supply while the old herd detoxes, and they are fundraising to buy 24 more in addition to covering testing expenses. They recently began selling the new milk and the products that have received clean test results, while waiting to hear back on other tests. 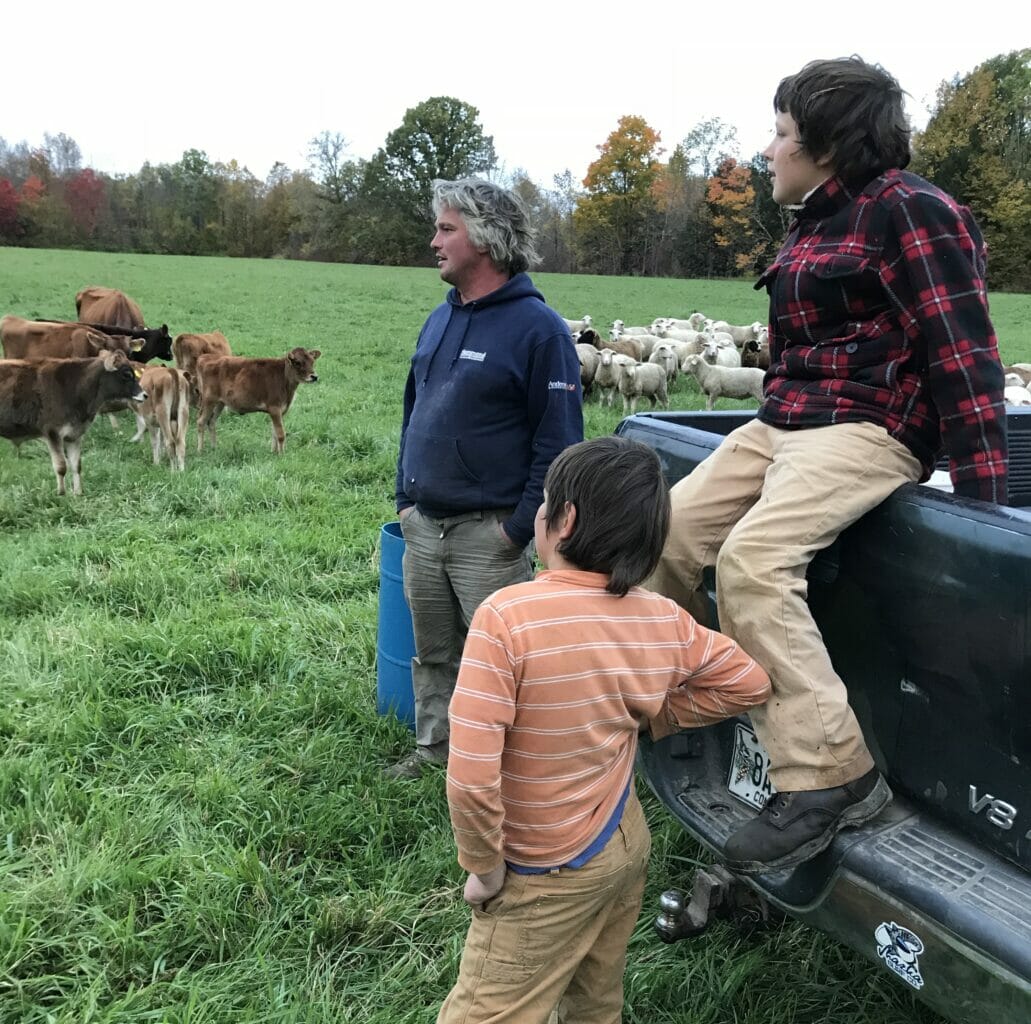 Both Songbird and Misty Brook, along with several other small farms, are within or near the area of land the state-sanctioned biosolids were spread over more than 700 properties in the 1990s. By late February, a total of nine farms had known contamination, while others are still awaiting results of testing, which is challenging to complete on still-frozen ground.

Maine’s farming community has rallied around the cause and the Maine Organic Farmers and Gardeners Association and Maine Farmland Trust partnered to create a PFAS emergency relief fund to support the impacted famers by paying for testing and providing short-term income replacement for farmers who have found high levels of contamination and halted sales. Any Maine farmer dealing with potential contamination is eligible for the fund, which prioritizes Indigenous growers, many of whom were affected by the known contamination of the Penobscot River along Wabanaki tribal lands.

[RELATED: Northeast Organic Dairy Farmers May Get Squeezed Out of Business]

The fund started with $255,000 in seed money raised from several regional foundations, but that won’t be enough to help all those affected. So, in the midst of birthing pigs, their annual sheep shearing day and raising their two boys, the Holmes took valuable time off-farm, along with Davis and Nordell and a dozen other farmers, for a trip to the state capitol in Augusta to speak in support of three new state-level bills.

“We voluntarily tested our milk for PFAS because we provide our customers with the highest quality food possible,” says Katia. “When we found our cows were contaminated, we couldn’t carry on without speaking out. My husband and I have two core values of honesty and integrity. There was no other option for us.”

Maine is currently leading the way in safeguards against PFAS with the current bills, and state-recommended thresholds already established in water, meat and dairy for PFAS, used to make products such as waterproof clothing, food packaging and firefighting foam.

Of the three bills awaiting votes in the state legislature, two are directed at stopping the spread of PFAS and biosolids sludge. LD 1875 would take immediate action to stop the continued spread of contaminated sludge, like that still being dumped into the Penobscot River by Vermont-based Casella Waste Systems and Old Town’s ND Paper mill upstream of the Penobscot Nation, while water filtration systems are being put in place. LD 1911 would establish the first statutorily mandated limits on the amount of PFAS allowed in land-applied biosolids in the nation. And the last bill, LD 2013, drafted after the rally and just passed unanimously in the Maine Agriculture, Conservation and Forestry Committee, would provide $100 million in aid to affected farmers, including covering testing costs and income support, along with lifetime health monitoring and PFAS-related health care to anyone affected.

“This is just the tip of the iceberg, and Maine is really at the forefront of this issue nationally,” says president and CEO of Maine Farmland Trust Amy Fisher. “We take heart that Maine has a really resilient and interconnected food and farm system. Customers know their farmers, people know their neighbors. We also have a strong network of organizations and entities that are ready to support and advocate for farmers here. I think that puts Maine in a unique and promising position to meet this type of challenge.”

Maine’s PFAS contamination spreads beyond its farms and the products produced on them. PFAS contamination was first discovered in milk from Stoneridge Farm in Arundel in 2016. In 2020 it was found in a farm in Fairfield, which prompted the Maine Department of Environmental Protection to investigate the town’s private wells. So far, PFAS contamination has been found in 260 Fairfield wells, and the town is considering a $47-million proposal to upgrade and extend its public water system.

PFAS contamination has been found in all 50 states, and nearly half of the country’s sewage sludge, according to research done by the Environmental Working Group. The forever chemicals have also been found in garden fertilizers currently on the shelves labeled as “eco” and “natural” in tests done by the Ecology Center of Michigan and Sierra Club.

While water filtration systems can be added to wells, research into soil remediation is in its early stages. Yet new research shows that some plants, like fruits and the grain grown at Songbird and Misty Brook, contain only trace amounts of PFAS, which could point a way forward for some farmers.

“The science and knowledge base are all so young around this,” says Davis, who, with Nordell, has decided not to farm anything this year. “All of our service providers are scrambling to address it or to understand it.”

Nordell also points to the epidemiological data from communities in the Ohio River Valley and workers at DuPonte and 3M factories who have been exposed. “You start looking at the list of associated medical conditions—nobody’s going to take that risk for their child,” he says.

In the meantime, they will continue to advocate for PFAS legislation. “We can’t continue to contaminate the finite resource that is our farmland, and we can’t continue to pollute our waterways,” says Nordell, which is why, he says, they are telling their story, acknowledging this issue affects more than just Maine.

“The unfolding PFAS crisis in Maine is alarming,” says Fisher. “We are just beginning to get a sense of the scope of what PFAS contamination means for our rural communities and local food system, here and across the country.”

This post has been updated to reflect the correct year that PFAS was discovered in milk from a Maine farm. It was 2016, not 2020.

Please post the best resources to help these farmers and to help the fight against PFAS spread in Maine. I’m awaiting the results of testing on my own livestock farm in Kennebec county.

Where is the farm that’s “dumping” its contaminated milk dumping it?

The article should update its timeline; PFA contamination in Maine was found in milk in 2016 at Stoneridge Farm in Arundel, Maine. I am also curious about how farms are “purging” and “dumping” meat and milk products, since this must ultimately be being reintroduced into the environment.

It’s great to hear that there is so much advocacy around the issue of contaminated land and water in Maine and that there is an activist approach in dealing with the issues. Clearly, farmers, consumers, decision-makers are recognizing that there is no true “safe” amount, or justifiable amount of PFAS contaminants in our drinking water and soils that we grow our food in. It remains to be seen if growers at the scale of factory farming and industrial agriculture will demand the same ethical standards when it comes to non-organically grown foods. Agri-chem and other big polluters are often in… Read more »

What is causing such high PFAS concentration in these areas?

Republicans always make products that Maime & Kill – always.
Tobacco. Round-up. Teflon. GM cars. As long as Republicans can profit off poisoning and Killing, its all good.